The two partners at Matter Design excel at converting their avant-garde ideas into reality. 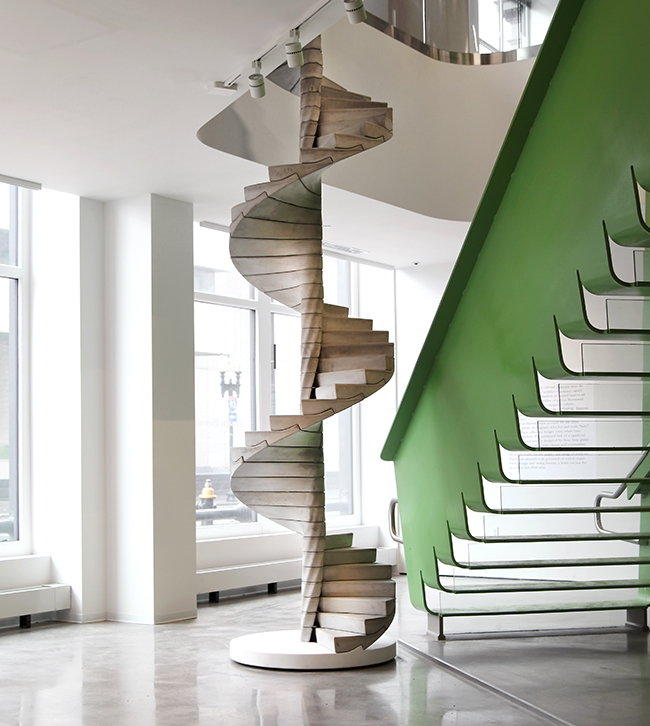 Built to half scale, the Helix spiral staircase is composed of interlocking, precast concrete pieces.

In the spring of 2010 Brandon Clifford and Wes McGee held an online charrette to plan their entry in the Modern Atlanta 10up competition. The contest challenged teams to build a 10-by-10-foot, temporary installation that could be assembled in 24 hours at a cost of no more than $4,500. Clifford, who was finishing a master’s degree in architecture at Princeton University, suggested a classical Roman or Greek col­umn composed of solid elements. McGee, who had just begun his first semester teach­ing at the University of Michigan, suggested crafting the elements out of Styrofoam. The result was Periscope—a 50-foot struc­ture built of digitally cut EPS foam that, when assembled, formed curves resembling the folds of a cloth tent.

“Brandon tends to take the lead on the design perspective,” says McGee, a partner with Clifford in Matter Design, the studio and research initiative the pair founded in 2008, which was awarded the Architectural League Prize this year. “I tend to think of fabrication. But we both have an interest in working with real materials. If a project can’t be built, we’re not even going to look at it.”

McGee and Clifford first met in the Advanced Wood Products Laboratory at the Georgia Institute of Technology. On paper they had little in common; McGee was a graduate student in industrial design with a bachelor’s degree in mechanical engineering. Clifford was an undergraduate in architecture with a strong interest in theory and history. They ended up bonding over furniture. “As a kid, my favorite tele­vision show was the New Yankee Workshop on PBS,” Clifford explains. In 2007, with Clifford already working as an architect in Boston, McGee came to the Graduate School of Design at Harvard University to run its digital fabrication lab (Clifford recommended him for the job). The follow­ing year they created Matter Design. 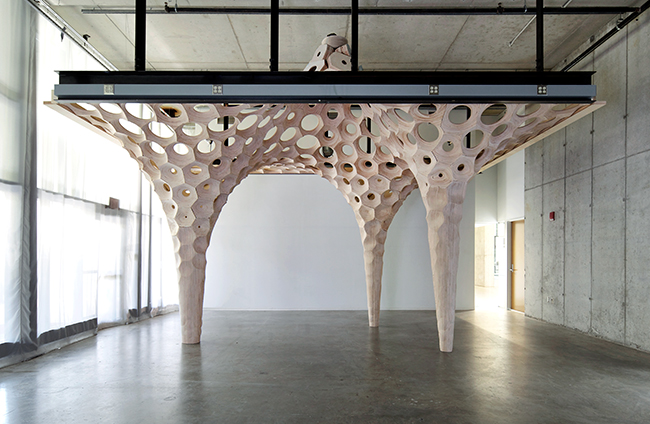 The studio balances old-world concerns with digital-age capabilities. La Voûte de LeFevre (above) is a compression-only plywood vault completed in May 2012.

The studio is an intriguing paradox, with one foot in antiquity and another in the computer age. Along with Periscope, its major projects include La Voûte de LeFevre—a birch-plywood vault held in place entirely by its own weight, and Helix­, a spiral staircase built from unreinforced concrete treads that lock together like stones in Incan walls. Matter Design also produces furn­iture, jewelry, and, once, a digitally drawn dress.

A part of its research aims to transpose ancient techniques such as custom masonry into forms that make sense in a world of expensive labor, dwindling resources, and digital fabrication. Another vein attempts to invert the traditional relationship between designer and maker—to shatter the binary paradigm wherein the architect draws and the contractor builds.

The son of an astronaut, Clifford still prefers the argot of the ancien régime to that of modernism. One of his favorite referents is Philibert de L’Orme, a sixteenth-century French architect who invented a new method of architectural drawing—the trait geometrique. “It was a two-dimensional drawing that, when wrapped around a block of stone, showed the mason exactly where and how that stone should be cut,” says Clifford, who is also a lecturer in architecture at the Massachusetts Institute of Technology. “With these precisely carved pieces, they were able to create magnificent vaults.” 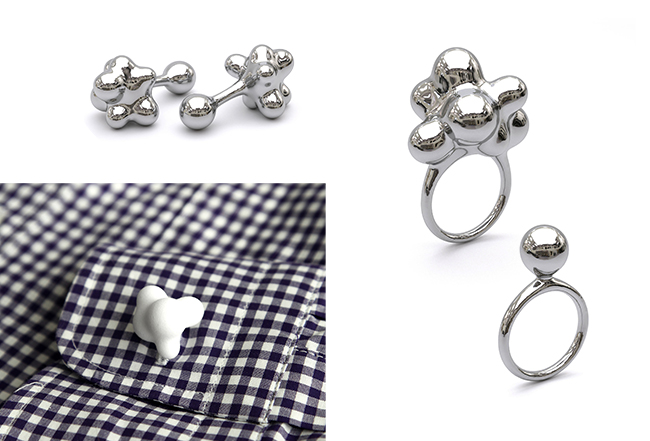 The duo’s most recent project is Cumulus (above), a collection of 3-D printed jewelry.

While Periscope grafted Renaissance forms with contemporary materials and advanced technology, the workflow during that project still was from the late twentieth century. McGee and Clifford proceeded in linear fashion from CAD to CAM, and finally to computerized machine-code files. “It’s a limited method,” says McGee. “At every step there’s a translation. You can’t really modify things in real time. But it’s different today. We are literally seeing 3-D simulation of robotic equipment as we draw. This gives us an environment that provides feedback between design and manufacture right at the design phase.”

Evolving technologies and a love of lost knowledge are the main drivers in Matter’s research. The firm’s greatest asset, however, is its agility. This past January, Clifford visited the display space at the Boston Society of Architects (BSA) on Congress Street. Matter had been invited to contribute to Design Biennial Boston 2013—the BSA’s showcase of young regional design talent. Halfway through his tour, Clifford paused at a rail overlooking an open stairwell. He’d recently returned from a three-month architectural journey on a $50,000 SOM grant—a tour that exposed him to, among many other elements, spiral architectural forms in South America, Europe, and Asia Minor. “We could build a spiral staircase,” Clifford wrote, on the spot and entirely in jest, to McGee. “I could cast concrete treads,” McGee fired back from his Michigan office, his partner’s sarcasm apparently filtered out on Gchat. One month later, the Helix staircase was installed.