The Melbourne School of Design upends the centuries-old conventions that still define most architecture schools. 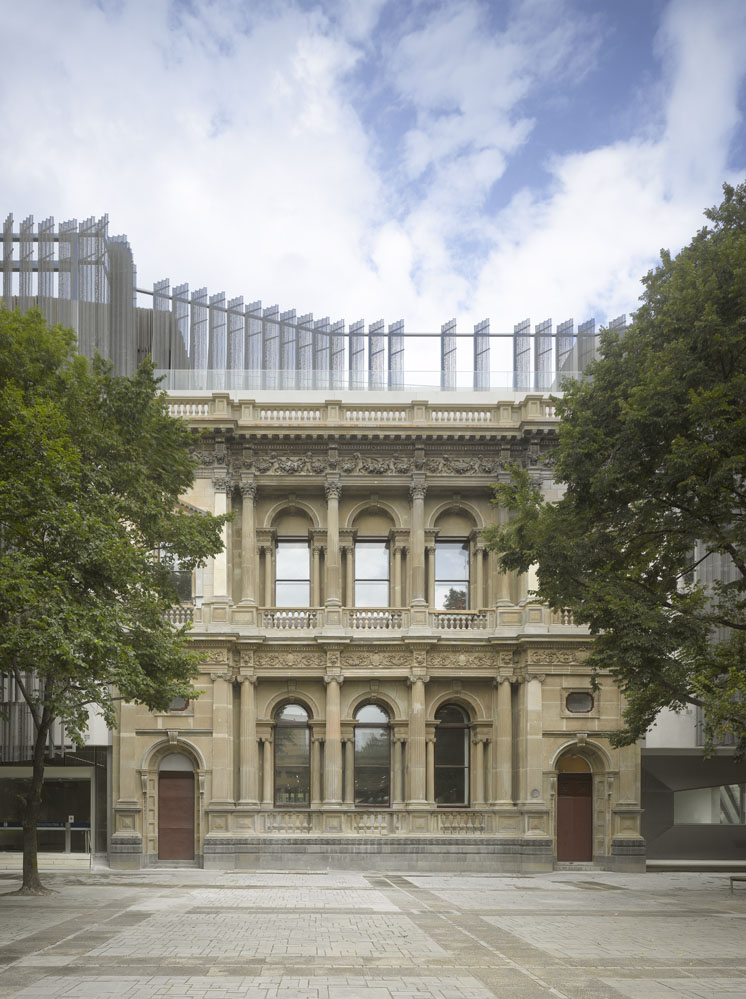 The new Melbourne School of Design houses workspaces, faculty offices, and a library for programs in different disciplines including architecture, construction management, and urban planning. Situated at the head of the campus, the building strives to be an anchor. “It doesn’t have a back, it has four fronts,” says Nader Tehrani, principal of NADAAA, who collaborated with John Wardle Architects on the project.

Despite the depreciation of Postmodernism in architectural circles, one of that aesthetic’s crucial ideas, the project of an architecture parlante, is curiously alive and well. It would be wrong, of course, to conflate the conceit of a “talking architecture” with Postmodernist schlock. As can be seen at the new Melbourne School of Design (MSD), designed jointly by local John Wardle Architects and Boston-based NADAAA, an architecture parlante need not be jokey or slathered with questionable affectations.

In fact, it can be rather sleek. On the exterior, the building, which houses programs under six professional disciplines including architecture, landscape architecture, and urban design, is covered in thousands of prefabricated, painstakingly orchestrated zinc and concrete slats, in themselves signifying little. They don’t burn with the warmth or charm of the disembodied neoclassical facade—the locally celebrated vestige of the Joseph Reed–designed Bank of New South Wales—affixed to the building’s western face; they do alternate cardinally, so as to project a different urbanistic message on each side. Put more bluntly, they’re tinsel.

Purposefully so, say the architects. “The budget was relatively ‘healthy,’ but it did not allow for many frills,” says Nader Tehrani, head of NADAAA and the recently appointed dean of Cooper Union’s School of Architecture. “We decided that the building could array itself from the center to the exterior, almost like an onion, with a range of finishes that go from the raw to the cooked, from the rough to the finished.” Much of the architectural nicety is locked away inside, unfolding spectacularly in the central atrium. Lined with timber, the space acts as a social condenser for all of the school’s 3,000 students, who, buzzing back and forth beneath the wood-and-glass coffered ceiling, unconsciously enact MSD’s pedagogical model.

Masterminded by MSD dean Tom Kvan, the teaching method undoes the neoclassical conviction according to which so many architectural studios are organized. “In the Beaux Arts model, people are working at assigned desks, they learn through peer conversation, but there is still the implied instruction of a master,” Kvan says. At MSD, the horizontal datum of the studio is transposed vertically and arrayed along the thickened corridors ringing the atrium. These are free work zones that carry studio activity upward, carved-out spaces for spontaneous encounters and rapid-fire collaborative sessions. They are kitted out with “hot desks” that jostle their way over the lip of the floor plate and are held in place by a thin, liminal mesh and shiny folded stainless-steel railings that just say “zoom.”

“The balustrading is one of the most amazing expositions of craftsmanship in the entire building,” says Wardle, who also points to the sides of the exposed prefabricated-steel staircase as “pieces of evidence that tell the story of the building’s making.”

The gossamer walls of the central chamber are a counterpoint to the seemingly heavy sculptural mass of a suspended studio. The apple-core volume dominates the interior court, its wood encasement riddled with small openings—a kind of parametric pointillism that ostensibly registers the chamber’s acoustic variance. This is the architecture speaking to the students and passersby gathered on the atrium floor, the adjacent exhibition spaces, and the tiered perimeter below.

“The thesis of the entire building is manifested in these moments,” Tehrani says, and his collaborator agrees. All these visual throughways, fractal openings, and would-be peepholes give the sense of a “population gradient” as one travels through the building, Wardle suggests. “Architects are always good observers of those things that excite human behavior. The building catalogs these experiences to reveal the kind of programmatic adjacencies that really inquire about the nature of learning.” 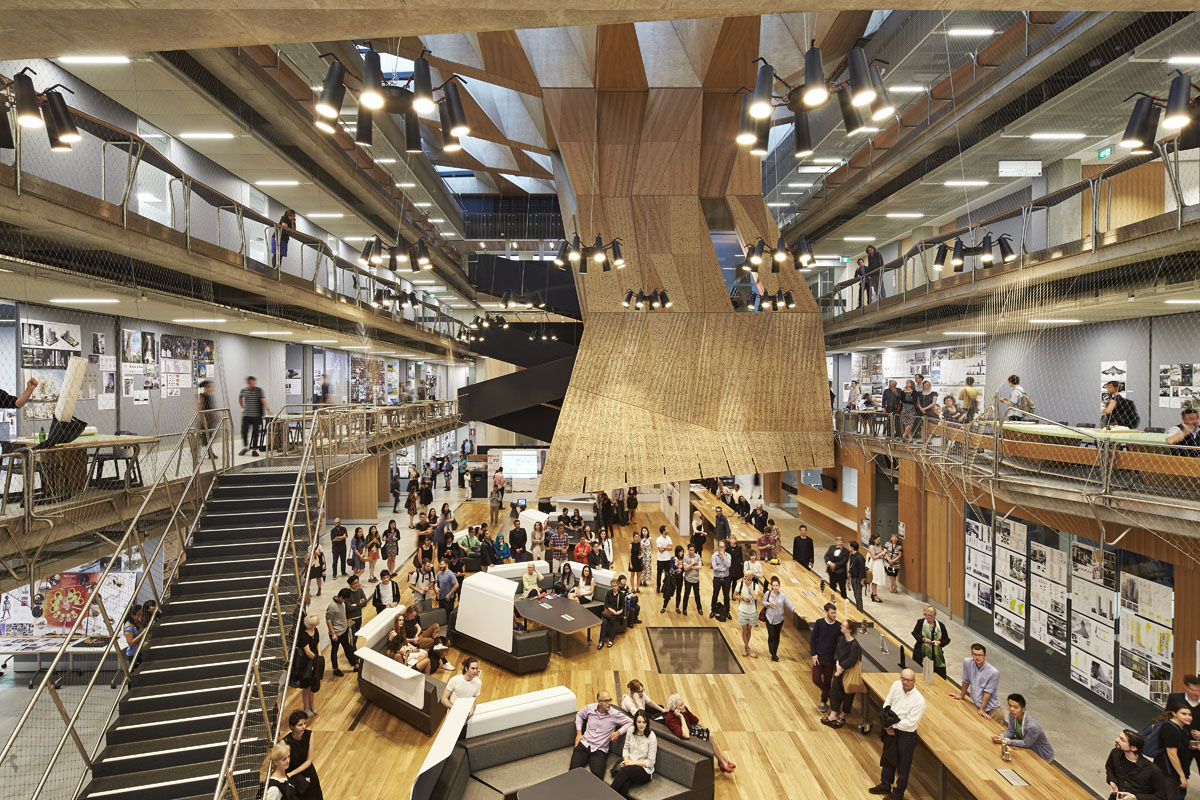 The school is a self-styled pedagogical device, whose features, from the exterior concrete and zinc panels to the perforated timber in the atrium, are intended to illustrate principles of the building professions to students. The architects simplified their use of materials­ and construction methods. “The materials we chose supported the idea of displaying the work that the students are doing inside,” says John Wardle. 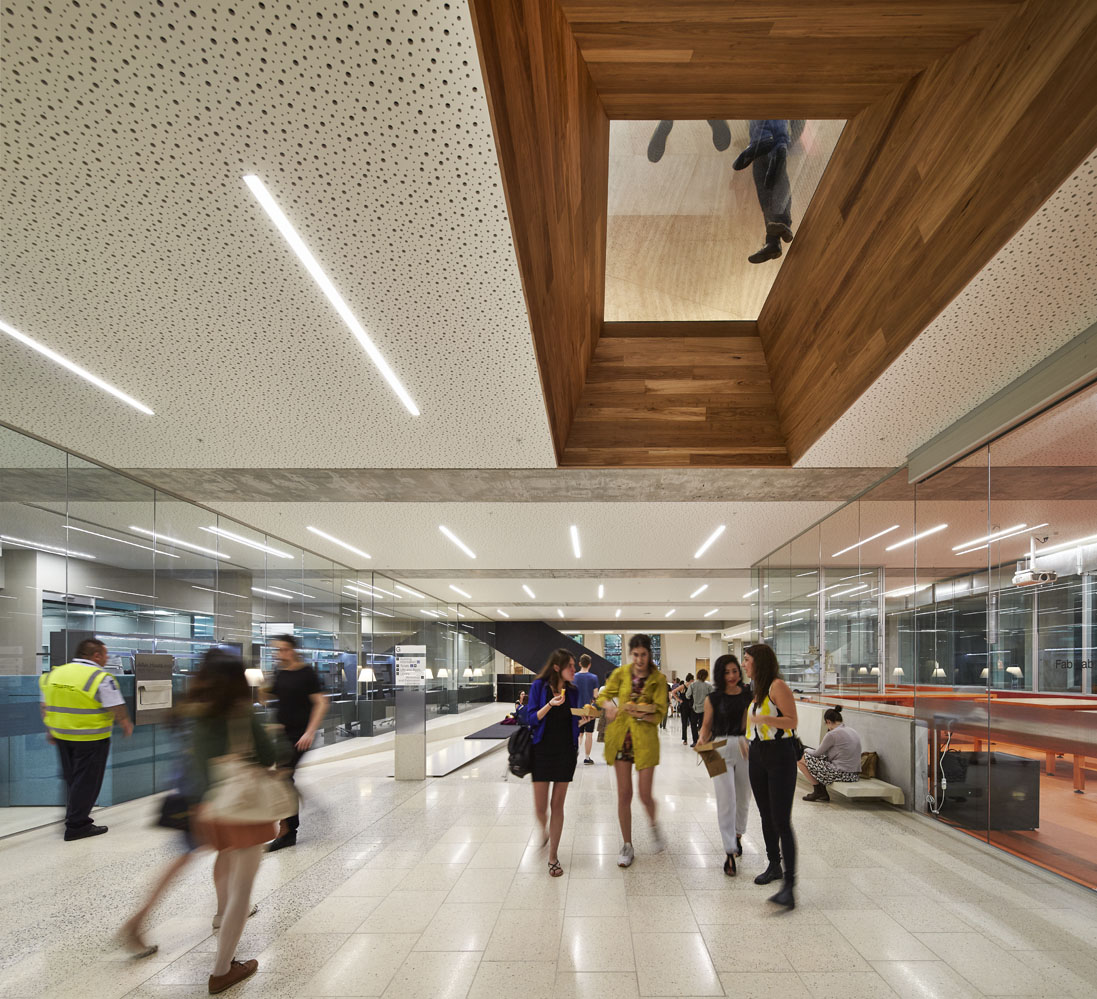 The ground floor of the building acts as a corridor connecting one side of the campus to the other. 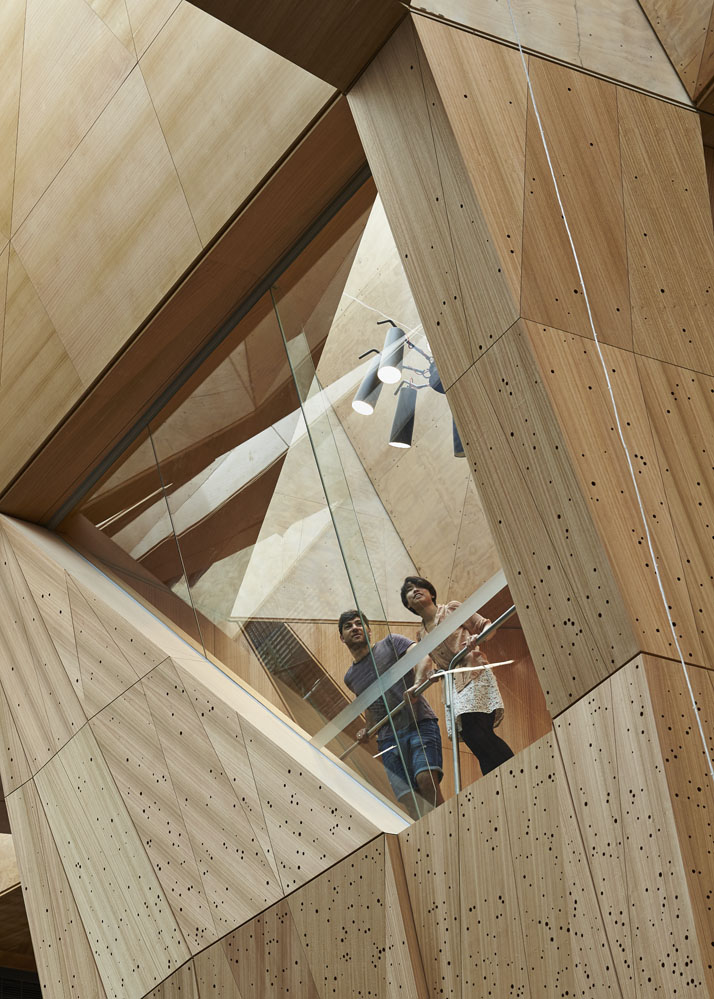 Large voids in the suspended studio give passersby a glimpse into studio activity. 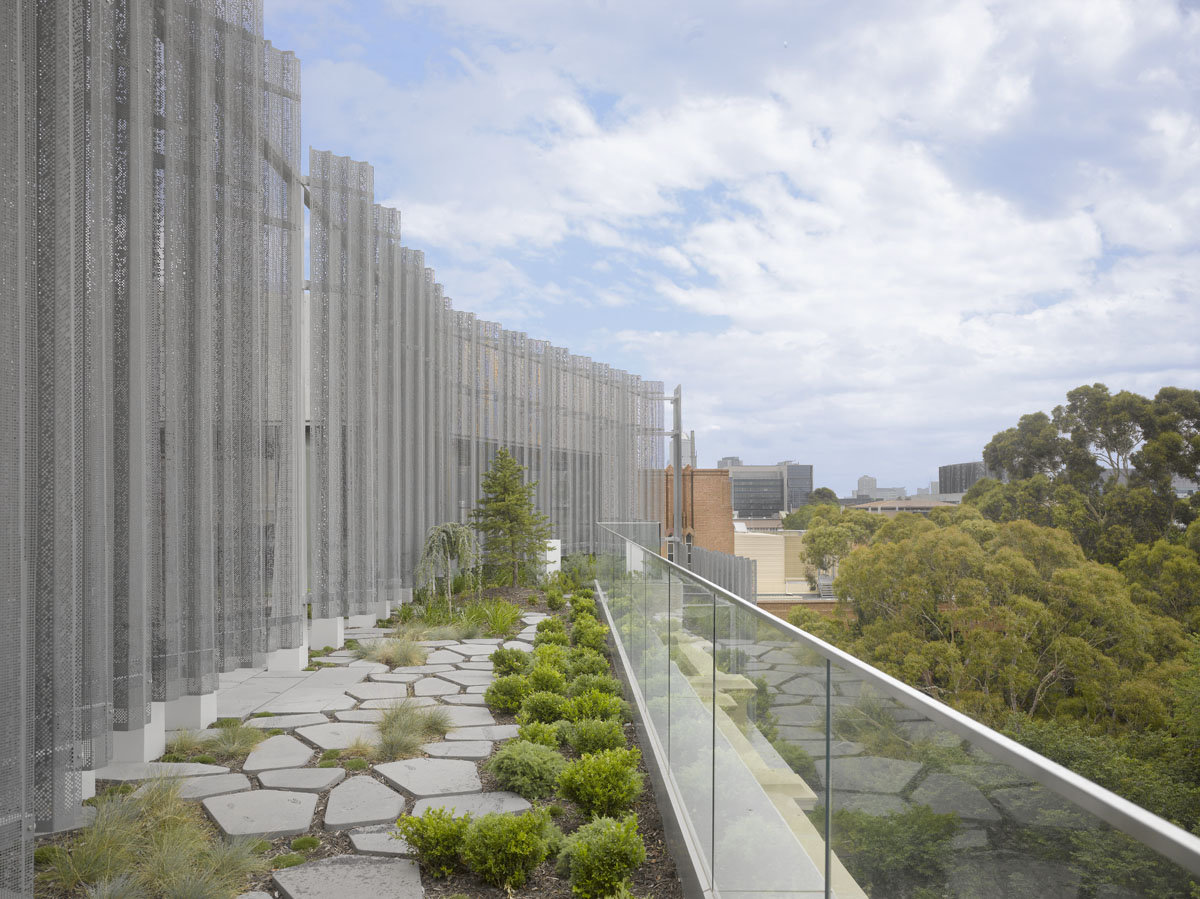