A history of the dressing table touches on issues of identity and power.

All images courtesy The Metropolitan Museum of Art

Any history of self-presentation necessarily brushes on the topic of seduction. And while this might not be the ﬁrst thing that comes to mind when entering the modest gallery at the Metropolitan Museum of Art containing Metropolitan Vanities: The History of the Dressing Table, it isn’t long before the slow-burn spiciness of the show starts to build heat. Peering into the exhibition’s raw silk–lined vitrines at the mirrors, combs, nécessaires, and cosmetic jars of nearly four millennia, it’s not difﬁcult to conjure a populace of painted, powdered, and perfumed individuals preparing themselves for the chase, whether in ancient Egypt, the Bourbon court, Edo-era Japan, or the Hollywood Hills.

The semiotics of seduction take several forms, from the allegorically suggestive to the outright obvious. There is one ﬁfteenth-century gilded ivory comb from a wedding trousseau, for instance, that bears a lively illustration of animals and birds gamboling around a ﬂaming heart that seems a veiled reference to the female sex. And there is the ﬂirty 1924 plate by French illustrator George Barbier called Le Grand Décolletage that shows a woman powdering her face at her vanity dressed in a practically backless (and sideless) gown that blooms with ﬂowers echoing the wall’s decorative vines. A close look at the illustration affords the viewer—and the natty gent in a tux—a side view of one pert nipple.

Decoration and décolletage comfortably coexist in Metropolitan Vanities. In fact, nipples are everywhere, whether in court painter Jean-Marc Nattier’s portrait Madame Mersollier and Her Daughter (1749), where both subjects are posed en déshabillé in front of the former’s ornate looking glass; Kitagawa Utamaro’s woodblock print Mother and Child (ca. 1793), which shows a woman sitting before her cosmetic stand attempting to arrange her hair while being suckled and pinched by a rowdy infant; or Frederick Frieseke’s impressionist Woman with a Mirror (1911), who considers herself in a handheld mirror while the viewer considers the delicate pink tips of her subtly exposed breasts reﬂected in another mirror.

These intentional wardrobe malfunctions seem an apt symbol for the slippage between private life and public presentation that’s repeatedly evoked in the exhibition. Though primping conventionally happens behind closed doors, the motivation behind such effort is almost always for the sake of public delectation. The show’s oldest artifact, a cedar cosmetic box that belonged to the ancient Egyptian cupbearer Kemeni (ca. 1814–05 BC), features an interior designed to hold a mirror and stone vessels for ointments, but is illustrated with an image of its owner serving his king, Amenemhat IV. 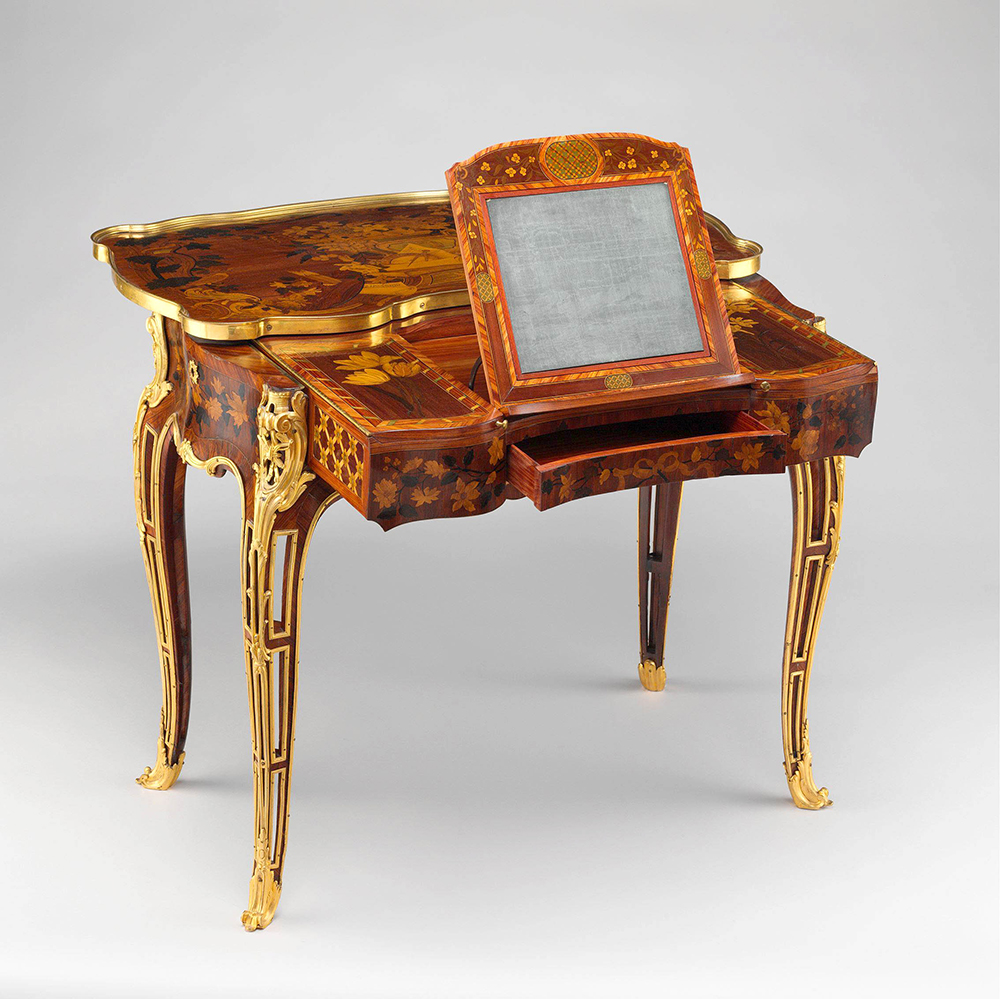 Not surprisingly, symbols of power also appear repeatedly in the show. One exquisite cosmetic stand from nineteenth-century Japan bears a series of minimalist symbols amidst its delicate maki-e decorations that turn out to be the family crests of Japanese feudal rulers. And Jean-Francois Oeben’s rococo mechanical table for Madame de Pompadour features ornate marquetry illustrating its owner’s considerable accomplishments in gardening, painting, music, and architecture. (Of course, Oeben left out depictions of the activity La Pompadour was best known for: being the mistress of Louis XV.) With its ﬂorid decorations and inclusion of a tower motif taken from his famous client’s coat of arms, Oeben’s dressing table was not only meant to please Madame de Pompadour but, in some sense, represent her. The fact that she was famous for receiving all manner of people while still at her toilette makes the object seem an all the more appropriate stand-in. 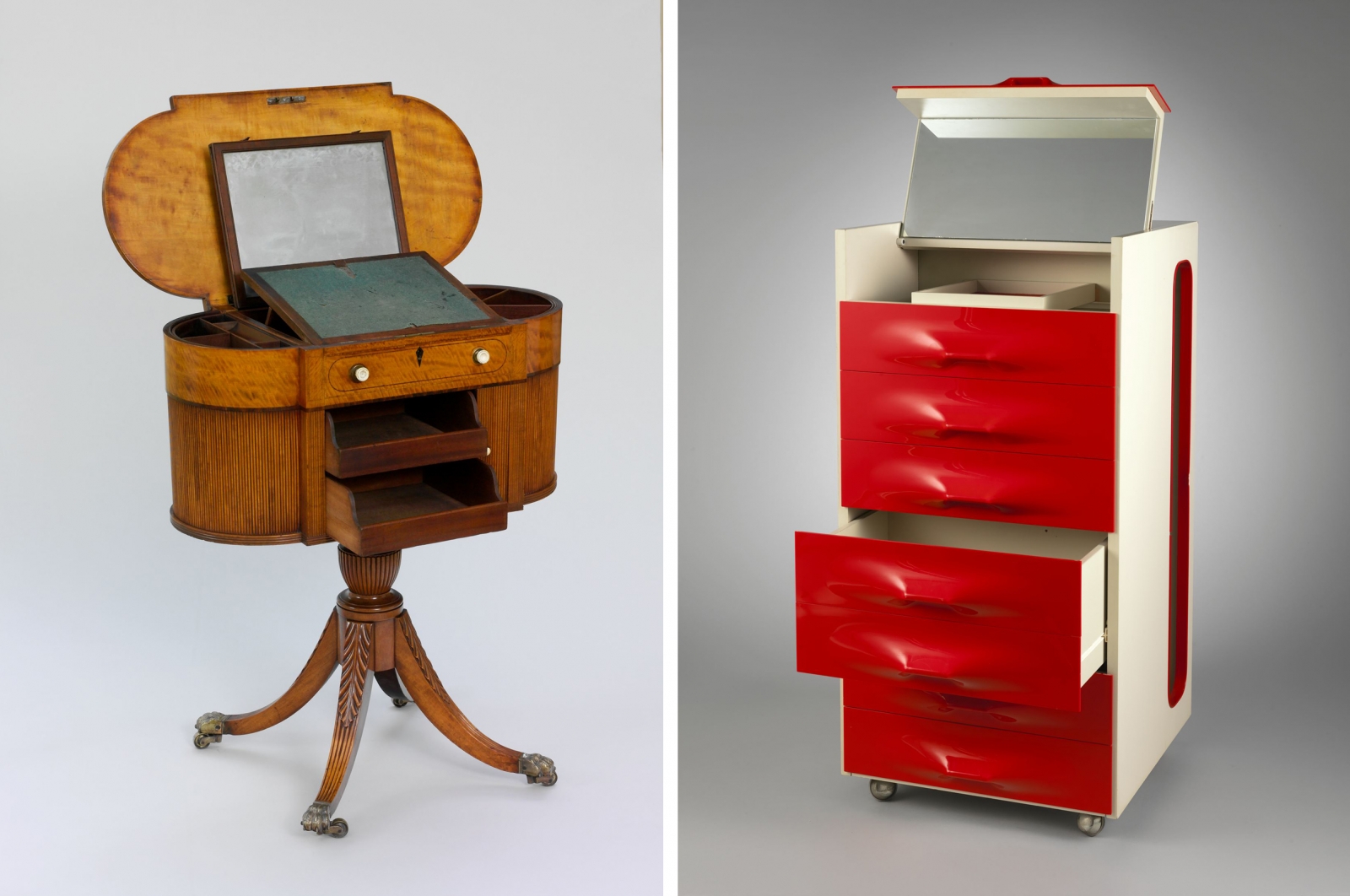 (l) A 19th-century “worktable” (1805-15) and (r) a 1969 dressing cabinet designed by Raymond Loewy—just two in a long line of vanities spanning from ancient Egypt to the present, showcased at the Metropolitan Museum of Art in New York.

Not every artifact in Metropolitan Vanities is voluptuary, though. There are a number of objects that delight in the innovative use of mechanical invention or new materials, including a 1790s Seddon, Sons and Shackleton mahogany-and-ivory table designed with room for a basin to accommodate that era’s growing trend of shaving at home, and Raymond Loewy’s red-and-white, plastic-fronted Valet 2000/50 Dressing Cabinet from 1969, which looks like a visitor from another planet in the midst of the gallery’s largely wooden furniture.

While leaping from baroque to Barbarella in the space of a few feet may cover all the curatorial bases, more recent work does seem to get short shrift. The inclusion of a mysteriously shaped 1991 scent bottle by David Taylor and an unconvincing monolith of a vanity by Byung Hoon Choi from 2013 seem like a scattershot representation of an age marked, after all, by vanity writ large.