The Manufacturer’s Hanover Trust Company building at 510 Fifth Avenue, New York. The lower levels are being renovated.The ancient Egyptians were the ur-preservationists, but I have always thought that there was something perverse about their method of immortalizing dead kings. The first part of the process, carried out by skilled professionals, was to extract all […]

The ancient Egyptians were the ur-preservationists, but I have always thought that there was something perverse about their method of immortalizing dead kings. The first part of the process, carried out by skilled professionals, was to extract all the internal organs of the Pharoah’s body—all the parts that we call “vital” for good reason, that enabled the man to walk, talk, eat, and think. These the embalmers put away in sealed jars. They then went to great lengths to swathe the hollow shell of a body so we can go stare at it in the Egyptian wing of the Metropolitan Museum of Art.

Much like the Egyptian mummifiers, the Landmarks Preservation Commission (LPC) of New York gave the Manufaturer’s Hanover Trust Company building landmark status in 1997, but protected only its exterior. Designed by SOM’s Gordon Bunshaft in 1953-54, the startlingly transparent exterior of the building is certainly beautiful in its own right. But its particular appeal was that it revealed an equally open interior, with famously visible vault doors, and a shimmering sculptural screen by Harry Bertoia. 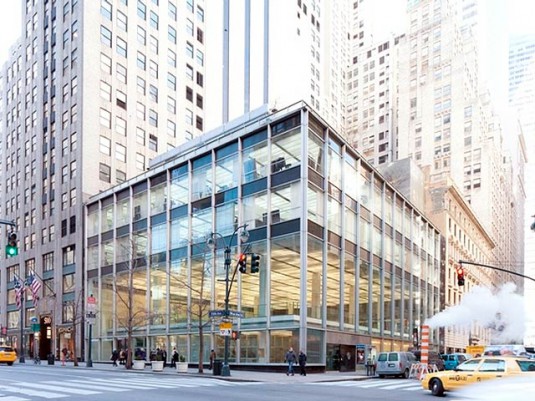 As the building changed hands over the years, Bertoia’s screen, like the Pharoah’s heart, was consigned to storage. After the inimitable Ada Louise Huxtable kicked up a fuss about this, the LPC and the building’s present owners, Vornado Realty Trust, worked to have the interior designated as a landmark as well, in February this year. That should have settled things to satisfy everyone, only Vornado announced that they wanted to convert the building into retail space, engaging SOM to figure out the details of the adaptive re-use. After two failed presentations to the LPC, SOM and Vornado finally received approval in April this year for a plan that included new entrances, new elevators, and ripping out the iconic vault, while leaving its door behind as a reminder of what once was.

At the center of the preservation battles for most modernist buildings is the critical question: Why do we preserve? And by extension, what in a building deserves to be preserved? New Orleans’s Phyllis Wheatley Elementary School is being bulldozed as you read this, because the people who wanted a functioning school and the people who wanted to save the building couldn’t find common ground. With Bertrand Goldberg’s Prentice Women’s Hospital, the preservationists seem willing to sacrifice the insides of the building to save its distinctive form – their petition to landmark the building says, “Its column-free floor plates makes this building especially adaptable for reuse.” But it was the floor plan, based on Goldberg’s new ideas of healthcare, which necessitated the form of the building, not the other way around.

There is a case to be made for preserving the envelope of a building as the marker of a period in architectural history, but in most cases a building’s aesthetics are intimately linked to its interior life. The issue becomes especially tricky in the case of the Manufacturer’s Hanover Trust Company building: where the aesthetics, the function, the interior and exterior were so intricately woven together by Gordon Bunshaft that it is nigh impossible to separate those strands. To truly preserve the spirit of the building would be to freeze it in its entirety. 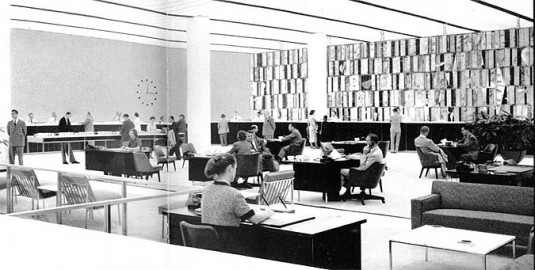 The interior of the building in 1955; Harry Bertoia’s screen is in the background. Courtesy the Municipal Art Society.

The ancient Egyptians were lucky that they were never called upon to actually bring a Pharaoh back to life. Unfortunately, we can’t afford to preserve modernist buildings in toto, for they must earn their keep by contributing to the urban economy. Neither does it make sense to save the shells of buildings while gutting their interiors entirely. The Manufacturer’s Hanover Trust Company building will carefully tread middle ground—the LPC and SOM have finagled endlessly over what stays and what goes in the interiors. Even while granting its approval, the LPC suggested that it wasn’t enough to just retain the vault door, but that the volume of the vault must be suggested in some way on the floor and walls of the new space. And the Bertoia screen might eventually come back. 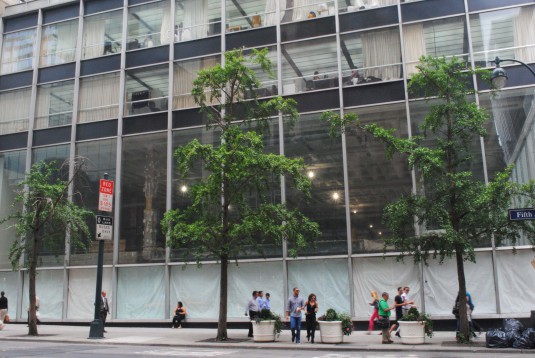 It is still a bit of a shock to walk past the familiar landmark on Fifth Avenue and see the glass on the lower level papered up to conceal the construction inside. It is even more heart-wrenching to step back a little, and catch a glimpse of the wrecked interiors through the dusty glass on the upper levels. And we might look back to rue this moment in history when a dapper banker of a building begins selling Joe French skirts. This will be one of those compromises that will satisfy no one entirely, but it does set a standard for other preservation battles. It is disingenuous to claim to fight for architectural history, and then wish to mummify empty shells of buildings. It will make for even tougher battles in places where the authorities are not quite as enlightened as New York’s LPC, but if modernism is worth preserving, it is worth fighting for in spirit.