Mr. Glass: The Met Presents the Glassworks of Carlo Scarpa

Thought Carlo Scarpa was all about marble and concrete? A new review of the architect-designer’s glassware begs to differ.

The Italian architect Carlo Scarpa was a master of history—exposing it, layering it, and fusing it with modern forms to create some of the most exquisitely detailed post-World War II architecture in Venice and its environs. His work has found new relevance in recent years, as historical renovation and adaptive reuse have assumed larger roles in architectural practice. But a piece of Scarpa’s own history—a significant portion of his work before and during World War II—had long been missing.

Now on view at the Metropolitan Museum of Art, New York, Venetian Glass by Carlo Scarpa: The Venini Company, 1932-1947 showcases some 300 pieces that Scarpa designed in Murano in the 1930s and 40s. All the drawings, photographs and other documentation for these multi-hued and brilliantly textured vases, bowls, urns, and platters were thought to have been lost in a 1971 fire. They were found two years ago, completely by chance, in a little-visited section of Venini’s glassworks and were first shown at the Venice Biennale last year, before traveling to New York.

In offering further insight into Scarpa’s methods, his meticulous handling of materials, and his wide-ranging inspirations, the current exhibition is a revelation. But in terms of placing these pieces in any sort of broader context—Venetian glass production, the fierce battles fought over aesthetics, the rise of fascism in Italy—this beautiful showcase is strangely reticent. 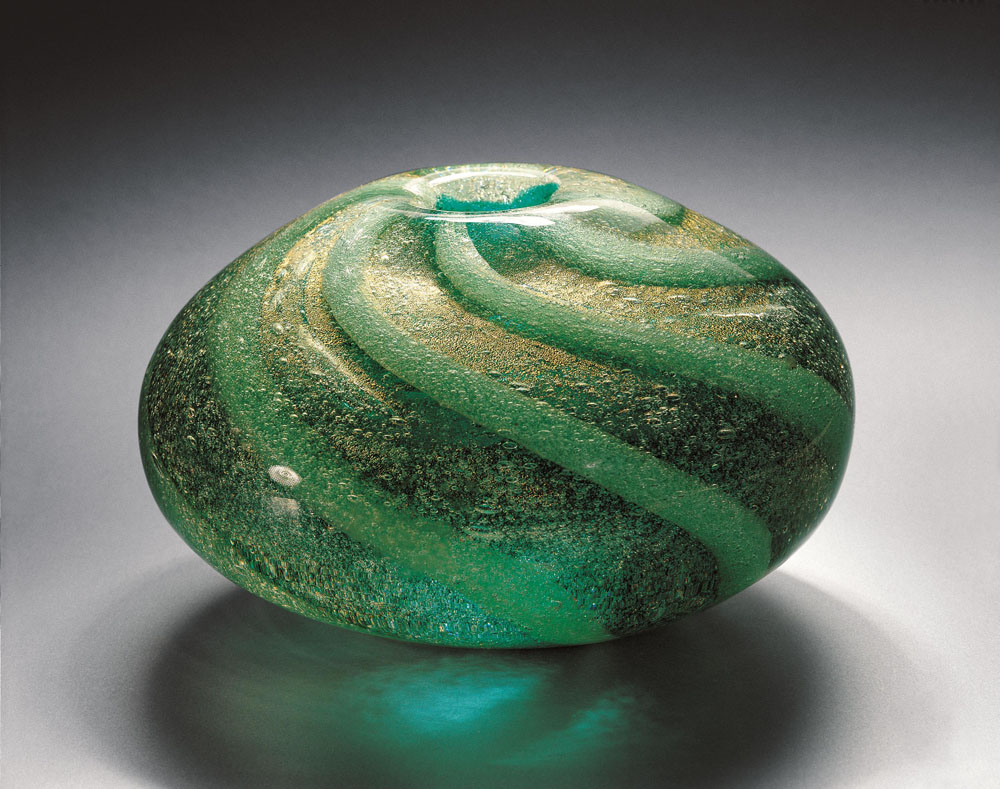 Green ovoid sommerso glass vase with gold-leaf inclusions and twisted ribbing on the interior, ca. 1934. Lent by The Steinberg Foundation, Courtesy of The Corning Museum of Glass *Part of the Sommersi series, ca. 1934-36

Every single piece of glass on display is breathtaking. The exhibition is organized by manufacturing technique, a strategy that works well because it is how Scarpa himself worked, pushing the master craftsmen at Venini’s furnaces to reinvent old methods, year after year. The show begins with thick, cloudy pieces that look like they were carved from jade, but are actually made with a method called a bollicine, where potassium nitrate is added to hot molten glass. This produces millions of tiny bubbles and that prized translucence. But before you get the idea that Scarpa’s preference in glass was monolithic and weighty, there, two years later, is the Mezza Filligrina series of paper-thin bowls with impossibly fine stripes. There is no use looking for any kind of progression here, as the young Scarpa circles through one technique after another, revolutionizing and modernizing Venetian glassmaking traditions.

Every technique gets its own vitrine, designed by Annabelle Seldorf. The labels all contain a little thumbnail of Scarpa’s production drawings, a testament to how extensive the recently discovered archive is. His full-scale sketches are framed on the walls, some of them with very excited notes in a big hand—one irregular bowl with gloopy petals on its base bears the instruction, Fuso!!! Fuso!!! (“Melted!!! Melted!!!”) 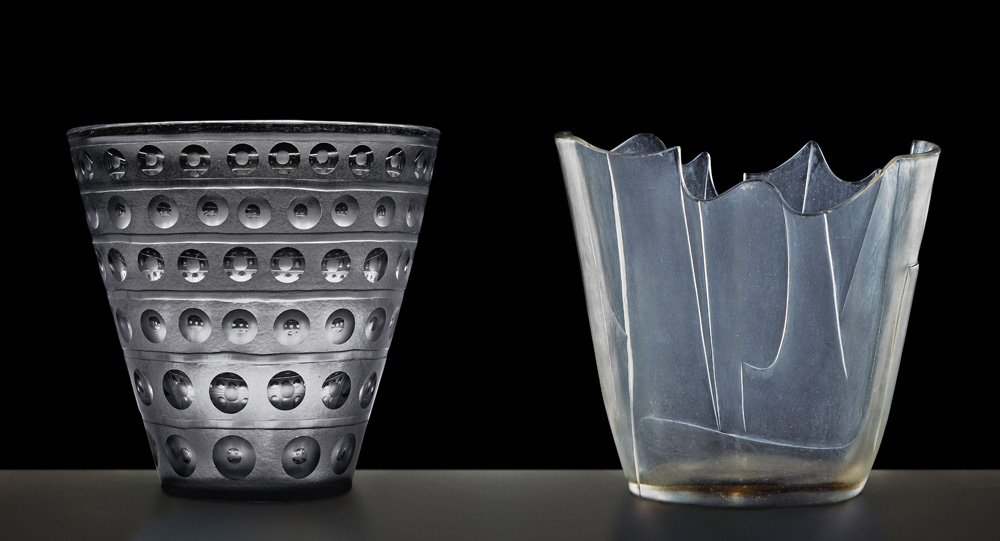 Given that the exhibition is at one of the largest museums in the world, curator Nicholas Cullinan has been able to add layers that the previous edition at the Venice Bienniale lacked. Next to the case that shows Scarpa’s revival of an old Murano mosaic technique, is another case with actual seventeenth-century Venetian glass made with the same method. The Cinesi series, Scarpa’s attempt at channeling the proportions of Chinese celadon ware in his glass designs, is accompanied by Chinese objects from the museum’s collection, some of them in identical shapes.

In fact, Scarpa was influenced by East Asian craft and architecture all his life. Visitors may draw this connection for themselves, from the fact that the earliest pieces in the show were imitations of old jade, or by perusing the catalog essay, which, it should be said, rather uncritically designates Scarpa a well-known expert in “oriental” art without going into how or why he came upon such expertise. 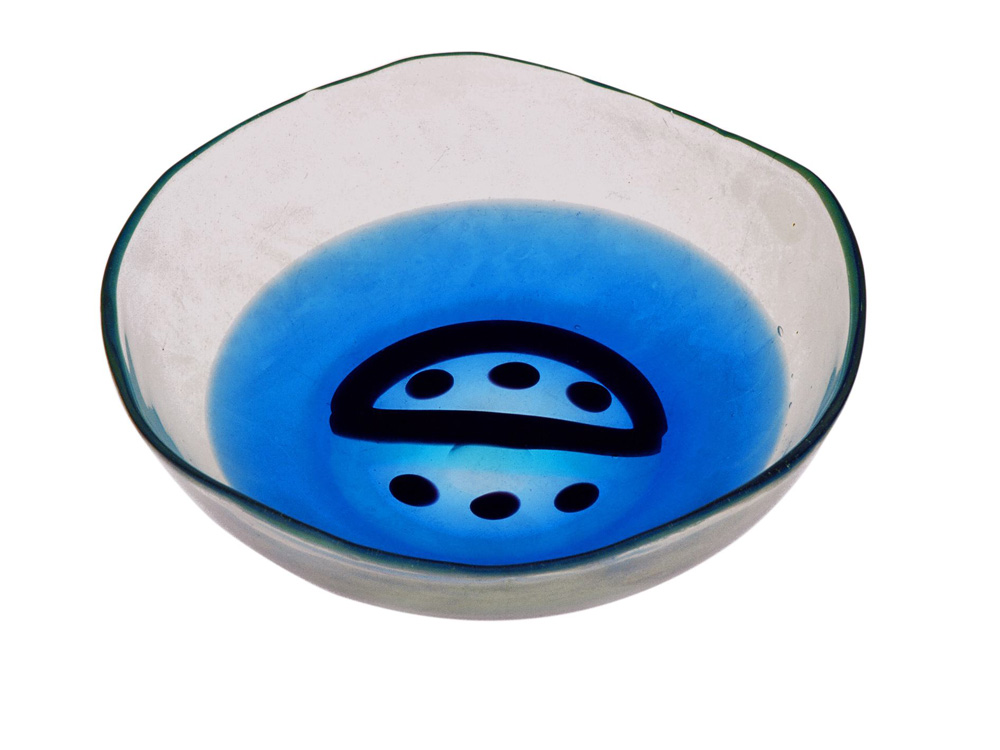 There are more serious omissions in this show. The exhibition is named for the tumultuous years it covers, but there is nary a mention, in either captions or wall texts, of Italy’s fascist history, or even the outbreak of World War II. (Scouring the catalog for mentions of Mussolini, I found one sentence, stating that Scarpa did not have the patronage of the government.) Surely the war and the oppressive regime affected both how and what Venini was able to produce and sell.

The architect’s own relationship with Fascism was conflicted. One of his early defenses of his work, and of his contemporaries who called themselves the Venetian Rationalists, was published in Il Lavoro Fascista (literally, Fascist Labor) as a letter in May 1931:  “It is unhistorical to draw on a past which we know is inadequate and unusable. History is followed and created by struggling with the present toward the future, not with nostalgic memories.” Such an attitude was surely problematic with a regime whose very name, Fascism, was drawn from a Roman imperial symbol. 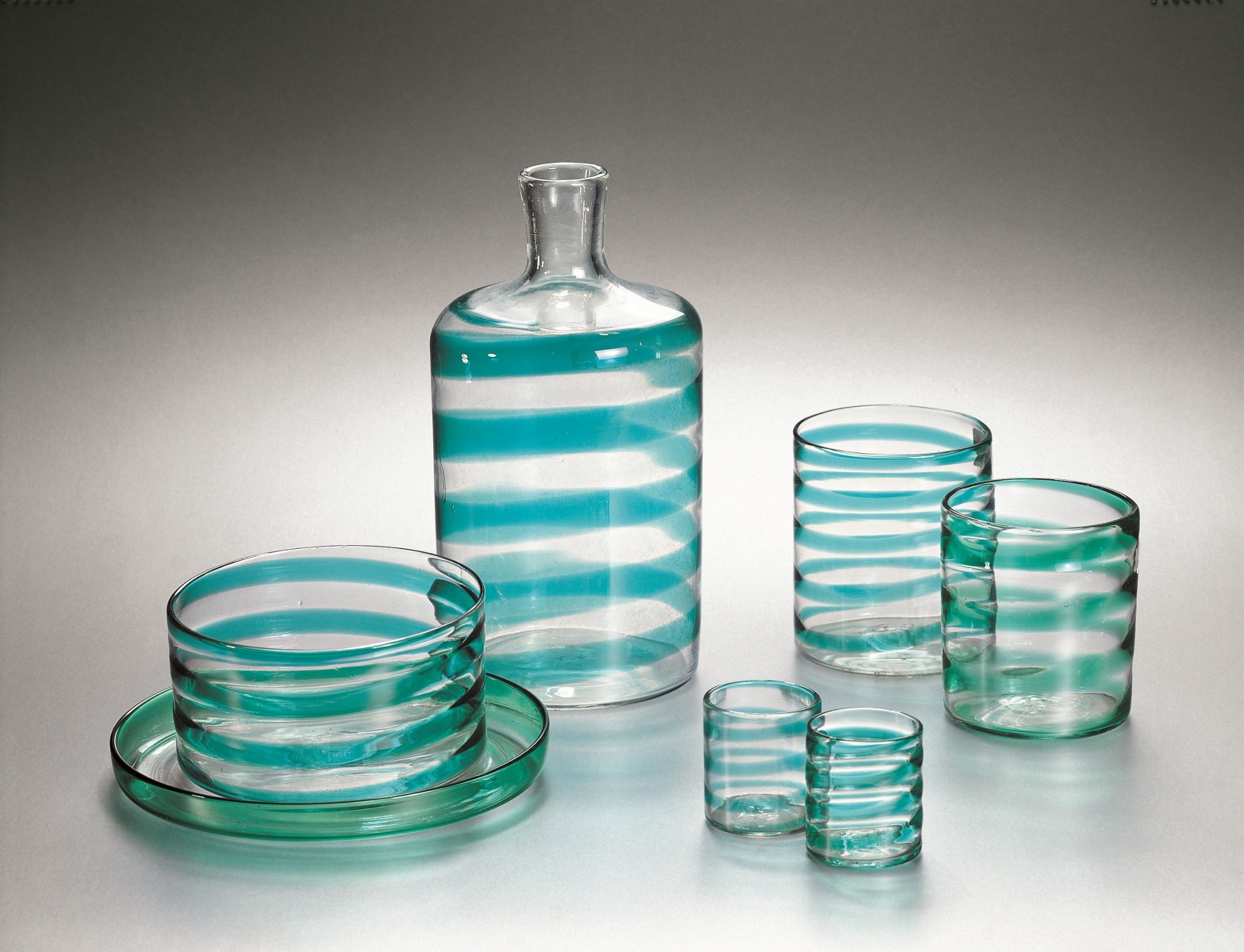 Bottle, glasses, tray, and small bowl in clear uncolored a spirale glass with aquamarine (acquamare) decoration, ca. 1936.
Lent by The Steinberg Foundation, Courtesy of The Corning Museum of Glass.
*Part of the A Cerchi, A Fasce, A Spirale Series, ca. 1936-1938

In 1957, when Scarpa was engaged in renovating the museum at Castelvecchio, he consciously undid the fascist-friendly efforts of previous architects. This would be one of the most important projects of his life. That he spent the war years designing posh living rooms and glass vases must mean something, but we must wait for less star-struck historians to give us their conclusions.

Venetian Glass by Carlo Scarpa is another design exhibition in the old art historical mode, that focuses on the material qualities of beautiful objects at the expense of their political and social dimensions. This is unsatisfying, not least because Scarpa’s own understanding of the past was so perceptive and nuanced.

Venetian Glass by Carlo Scarpa runs through March 2, 2014. The catalog, produced for the Venice Biennale, is available on Amazon

Carlo Scarpa: The Complete Works (Rizzoli, 1984), is an excellent reference, and contains pieces of his writing quoted above. 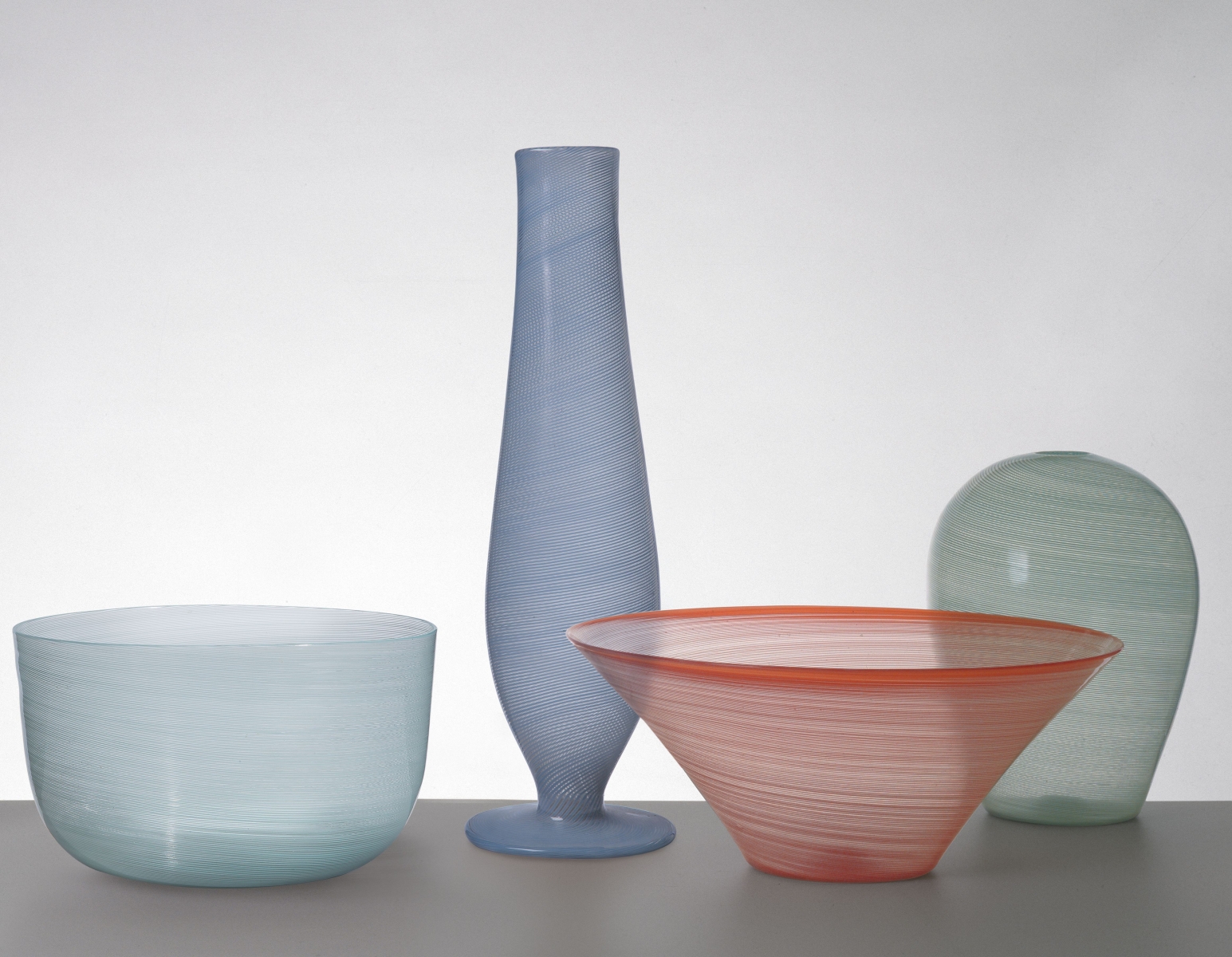 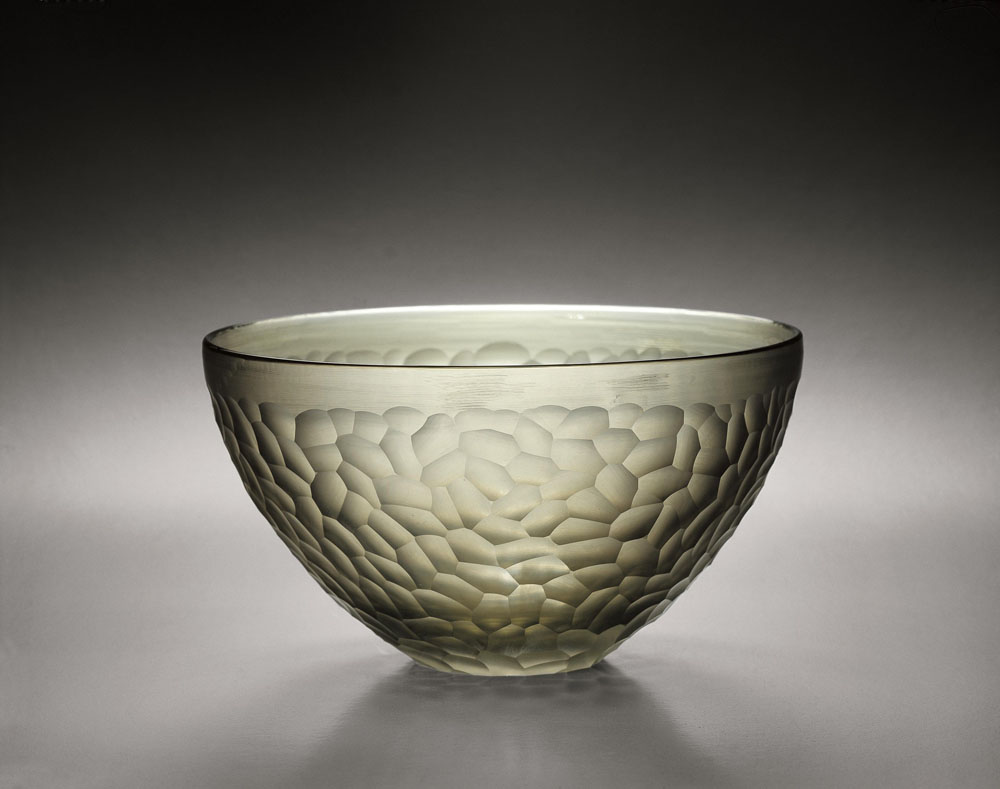 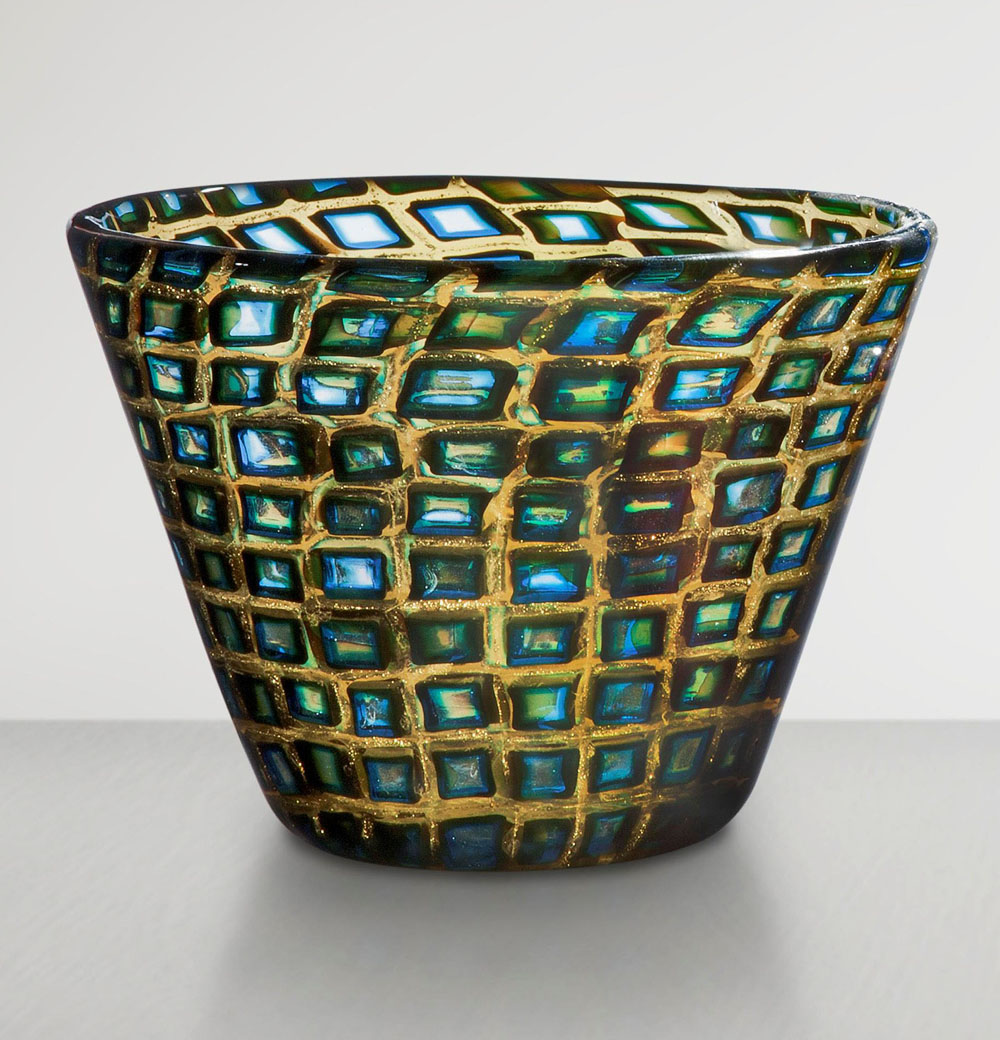 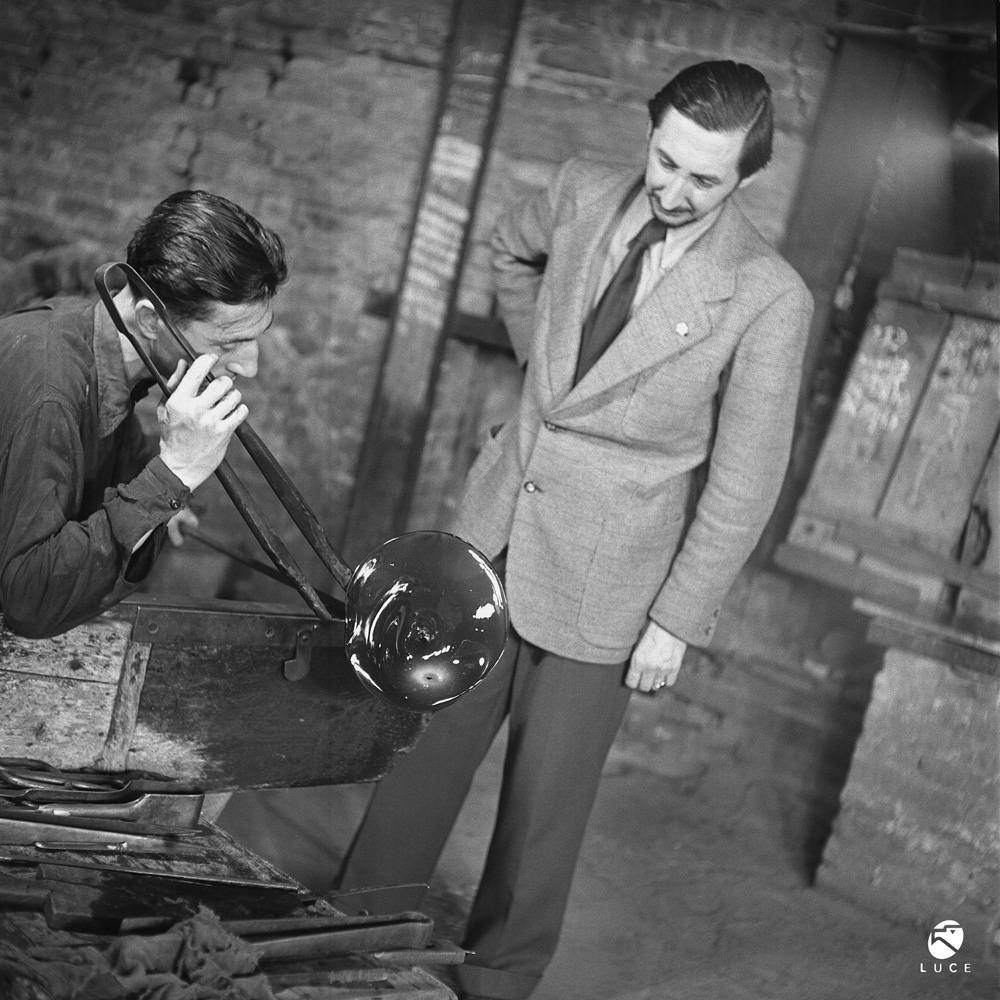