I live on St. Charles Avenue, home to the famous New Orleans streetcar line. It’s home also (in addition to some insanely impressive houses) to one of the most unique urban spaces in America. The St. Charles Avenue streetcars run on a tree-lined strip known locally as “the neutral ground.” This is simply a “median” […]

I live on St. Charles Avenue, home to the famous New Orleans streetcar line. It’s home also (in addition to some insanely impressive houses) to one of the most unique urban spaces in America. The St. Charles Avenue streetcars run on a tree-lined strip known locally as “the neutral ground.” This is simply a “median” in other cities, but in New Orleans there is—inevitably—a more colorful name, with a whole bunch of history attached. The neutral ground is no exception. As Ann Nungesser writes on About.com:
“The big neutral ground in the middle of Canal Street in downtown New Orleans is apparently the reason all medians are called neutral grounds. . . . The French Creoles were living in the French Quarter and the new Americans were living on the other side of Canal St. . . . around the turn of the nineteenth century. There were tensions between the two groups who had different lifestyles, manners, and values, but Canal St was literally the neutral ground where they met. Even the streets that didn’t exist until long after those ethnic tensions [eased] have neutral grounds, never medians in New Orleans.”

The Canal Street and St. Charles Avenue streetcars travel on neutral grounds. But it’s the leafy ribbon (sorry) along St. Charles that’s really interesting.  Planners and architects love to attach labels to space. There’s public space, contested space, hybrid space, flexible space, etc. The neutral ground on St. Charles is the ultimate in shared space. There are people walking (and people walking their dogs). There are people jogging (and people jogging with their dogs). Baby strollers are not uncommon. There is the occasional stray cat. Cars cut through at one-block intervals, making left turns from the one-way streets that flank each side of the neutral ground. On weekends, there are even people on horseback. And, of course, every few blocks a streetcar stop is somehow sandwiched in. Remember, all this activity takes place on what is essentially a pair of train tracks, as streetcars rumble back and forth (very intermittently, locals might point out) in both directions for about 20 hours a day.

This arrangement shouldn’t really work—especially at eight o’clock in the morning or five-thirty in the afternoon—but somehow it does. There must be accidents, but I’ve yet to see one. The first time I observed the neutral ground at rush hour, I thought of Hans Monderman, the late Dutch engineer, who, in the 1980s, pioneered traffic calming strategies using the idea of shared, unregulated space. Made famous by Tom Vanderbilt’s bestselling book, Monderman eliminated traffic lights and signs in a counterintuitive move that forced everyone to be hyper-aware of everyone else.

New Orleanians have been engaged in a similar dance with streetcars for even longer. The neutral ground has an uncanny flow that is easy to navigate. Even my dog, a native New Yorker and newcomer to the city, understands the protocol. Annie and I run in the opposite direction of the streetcar. When one approaches, we wait until it’s about a hundred yards away, check to see if the coast is clear in the other direction, and then switch tracks. After the streetcar passes, we reclaim our previous position. This is brilliant urban design, so clear and basic that even a dog (albeit a very smart one) can understand. 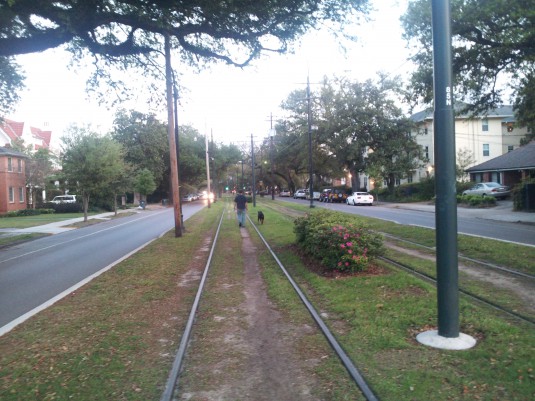