The New Barnes Foundation Building Is a “Rarefied Experience” 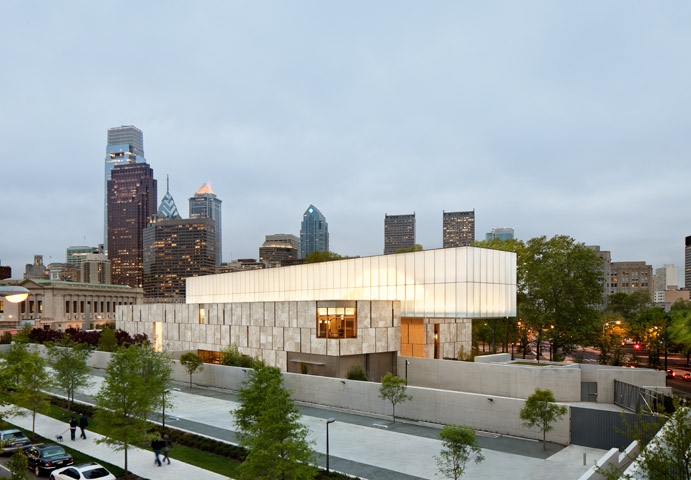 New York City’s Le Bernadin restaurant was the chic, Michelin-starred venue for a recent press luncheon held to announce the opening of the new Barnes Art Museum in Philadelphia. A narrow stairway off West 51st Street led up to a not very large room. Circular tables ringed with top-flight design journalists and editors were packed in like proverbial sardines. “I’d rather be working on a building,” said Tod Williams, partner in Tod Williams Billie Tsien Architects (TWBTA), smiling under his breath (try it sometime) as he approached his table dressed in the requisite black.

Tall, amiable, and given to occasionally salty language, Williams’s presence was in distinct counterpoint to the diminutive, serene, and more colorfully attired refinement of his wife and partner, the architect Billie Tsien. For a long time their complementary balance of sensibilities and skills have spelled success.

Williams, direct and unpretentious, sat down and took in the room. “This is a new level for us,” he said of the press event. You would think he was an old hand at this sort of thing, with international building projects clicking along and an esteemed reputation shared with Tsien.

A screened presentation for the press, coordinated with delivery of excellent food, commenced. The brief film that the architects themselves had not previewed was followed by still images of museum construction in progress. Taking turns at the mic, Williams and Tsien were introduced by the chipper Barnes executive director and president Derek Gillman. Laurie Olin, world-renowned landscape architect who worked on the new Barnes, and who decked out in jacket, tie, and blue canvas sneakers, also chimed in. (Did you think you had to be dressed to the nines to dine at Le Bernadin?) 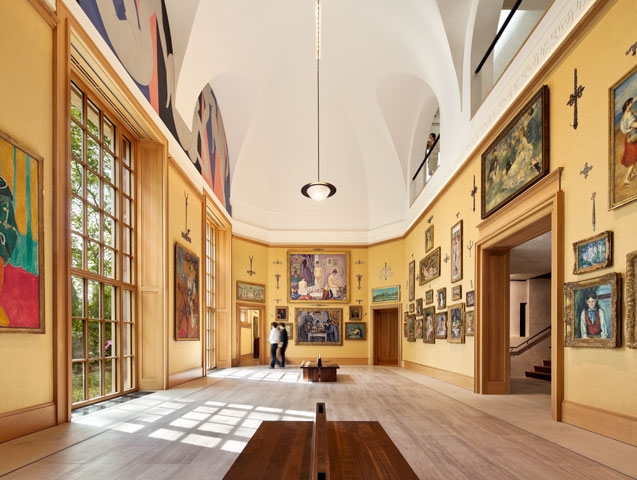 A bit about the institution whose new building we had convened around lunch for. Dr. Albert C. Barnes was the cantankerous, quirky, and prescient physician who had the smarts and the modest means (by current standards) in the 1920s, to sweep up Impressionist paintings still wet on their easels from upstarts like Paul Cezanne and Henri Matisse. He installed them in his own art museum in the suburbs of Philadelphia where they were to be viewed on his own, strictly defined terms, in perpetuity.

Critics of the new museum may say that “in perpetuity” was translated into “whatever!” As was contested in court recently, a backroom cabal formed to break the 1922 trust indenture, ship the paintings across town, house them in a new structure and cash in. (See the not-exactly-balanced but worthwhile The Art of the Steal documentary for more.) Some Philadelphians still feel they’re on a “seesaw” of emotions regarding the whole thing. They’ve watched the crisply detailed, modern Barnes rise up from the Beaux Arts–planned Benjamin Franklin Parkway. They continue to weigh moral ambiguities in the breaking of the Barnes trust indenture vs. undeniably greater access of the art to a much broader public.

But back to the aforementioned luncheon. Perhaps you imagined it was a Washington-style press briefing where journalists hone in on their prey with “tough,” often rhetorical, questions. “Did you, sir, have any qualms about accepting an architectural commission fraught with legal and moral controversy?” This didn’t happen at Le Bernadin.

“Salmon is medium rare today. Is that okay with you?” asked the waiter of each guest. “Yes,” Tod Williams answered. “We’ll see,” he added, dubious that they could pull it off as the waiter spun away. For an architect details matter, greatly.

A full-scale mockup of a new Barnes gallery room was erected offsite in an “undisclosed location” in North Philadelphia to work out myriad fine-points of lighting, materials, and form. Speaking of such details, Williams said he had made his peace with the stipulated matching of the original, floor-to-ceiling placement of paintings at the Barnes down to the fraction of an inch. “I’m fine with it.” 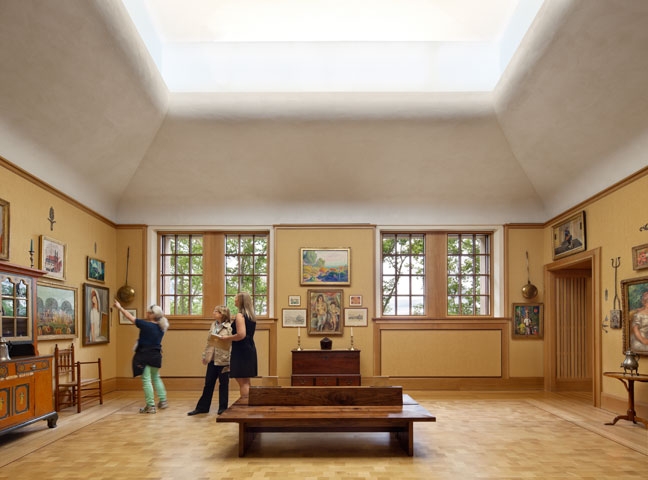 The architect was chagrined that he had not visited the old Barnes until they were contacted by the foundation as prospects for the new museum. Cézanne and Matisse might forgive him. In any case, it didn’t hamper Williams and Tsien in their creative process—they trumped the competition, winning the day with their truly brilliant concept, a distillation of the original setting for the Barnes collection in Merion. The ideas was for a gallery in a garden, and a garden in a gallery.

Williams seemed to toss the word “robust” into the lunch conversation often but context was lost in the din. It’s not necessarily the word that comes to mind with their work, yet you certainly wouldn’t invoke “tepid” or “timid” either. If anything, Williams and Tsien are reaching for “timeless.” “Robust?” Call it a leitmotif or a mantra. Most architects have one.

Weeks later, onn May 16th, the tall wood and glass doors of the new Barnes Art Museum in Philadelphia finally swung open for the press. The chatter was predictable.

Stepping inside the main gallery on the first floor is an eerily deja-vu experience, if you had ever been to the old Barnes. In size and picture placement it is an exacting replica of the old gallery space. At the behest of their client, the architects had gone through a design exercise of enlarging gallery spaces but found that Dr. Barnes’s conception began to fall apart, the scale was off, so they remained faithful to the original proportions.

There are some modifications. Painted metal mullions instead are now a warmer, more agreeable (and energy-efficient) wood. Flooring is more elegant. But most notable is the light. Translucent clerestory windows bathe the formerly confined spaces of the Barnes in an expansive, subtle light. Even at 14% of available daylight the paintings glow in a new way. I thought I detected a slight greenish cast to the light emanating from the clerestory glass into the galleries that wouldn’t be desirable but the building is still being fine-tuned.

A small model of the building installed on the roof acts as a monitor to adjust screening of the actual building according to light fluctuations. Drawings that are especially fugitive are allotted only so many hours of light per day so controls have to meet very high conservation standards.

The gallery wing is wrapped and supported by ancillary auditorium, office, garden, cafe, bathroom and conservation spaces that Williams and Tsien are no less proud of. The brilliant Barnes holdings, set within a decidedly muted materials palette, rightly play the starring role. Now housed in this glowing treasure chest, the collections burn with an artistic intensity almost beyond belief and description. Matisse, Picasso, Renoir, Roualt, de Chirico, Modigliani …paintings, sketches, sculptures, furniture. Unlike other museum galleries, though, you will always return to the same exhibit. Paintings become old friends. 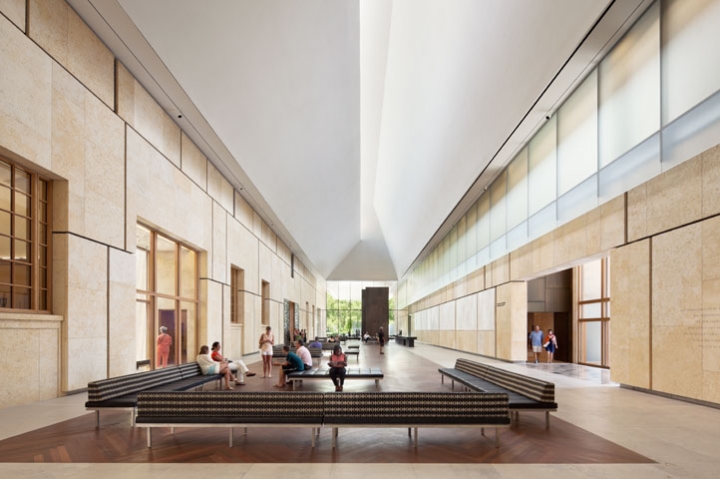 The new Barnes has been criticized for being “removed from the city,” yet that was the intention, unsettling as it may be. Indeed, it represents a curiously authentic, almost perverse tribute to the experience of the old Barnes. You had to travel away from the city to reach it, which is why so many Philadelphians never made it there. So now it’s folded directly into the city. To enter its grounds and traverse the path along reflecting pools filled with round stones, you are transported.

“Never heard of him,” Williams joked after someone suggested that the building was reminiscent of Louis Kahn’s Kimball Art Museum. Of course, the architects had made a pilgrimage to the Kimball and have deep admiration for the famed Philadelphian’s work. “We are in the shadow of Kahn,” he said deferentially to the home crowd, though this solid, new building stands on its own merits.

If architecture is “rarefied experience,” as once expressed by architectural historian William J. R. Curtis, then this is it. Billie Tsien points out on a walking tour that suddenly you begin to hear the birds sing as the cityscape fades into a walled, green estate of sorts. As Tsien describes it, they were constantly mediating between the site’s civic scale and the residential, personal scale of the old Barnes. Laurie Olin, landscape architect, “borrowed” the greenery of the Parkway itself to visually extend the garden grounds of the Barnes.

The main hall and light court to the outdoors provide the kind of tranquil refuge one hopes for in a city. The courtyard of the Boston Public Library by McKim, Mead and White confers an equivalent, cloistered urban serenity. Williams says they wanted to create a “more ancient place, time slowing down, something that endures.”

As the press circled the architects, someone brought up the inevitable question of the Barnes relocation controversy and the heat Williams and Tsien sustained from some fellow architects for accepting the commission. Tod Williams responded that it was a fait accompli “well before” they came along. Billie Tsien understood the swirl of public emotion but discouraged everyone from looking backward. “You need to be in the present.”

Nothing is forever. After all, how many of us haven’t seen King Tut or other glass-encased riches and ruins of ancient civilizations on display? Were those things not considered inviolate by those long ago peoples? In the case of Dr. Barnes, the legacy of his artistic holdings is absolutely extraordinary. As to his inspired, personally configured, Paul Cret designed, original art museum? “Forever” just wasn’t in the cards.