A New Building Typology for Johannesburg

The crumbling high rises of central Johannesburg’s Hillbrow neighborhood may be the most visible symbol of the multiple stresses of daily life in post-apartheid South Africa. Built in a spasm of speculative development in the twilight of the apartheid era, Hillbrow was conceived as a high-density, cosmopolitan, residential enclave for white professionals in the1970s.

Later in that decade Hillbrow would become a flourishing neighborhood of unique racial diversity, referred to admiringly as the “Manhattan of Johannesburg.” But in the final years of the apartheid state, whites began to flee the inner city and by 1994, when democratic elections were held, the neighborhood had become an overcrowded slum – a condition that’s persisted unabated.

When our Columbia GSAPP studio arrived in Hillbrow last March we fond that the neighborhood lives up to its reputation as fundamentally stressed by a neglected physical environment and lack of opportunity for those who live there. Its density today is similar to Manhattan’s—about 100,000 residents living in 1.5 square kilometers of central Joburg. Civic infrastructures including water supply, trash collection, and municipal sewers are broken and overwhelmed. Residents live in overcrowded, uncomfortable, dark, and unsafe housing blocks of 10 to 20 stories, many with broken facades and without functional elevators or fire safety systems. Hillbrow has become a magnet for immigrants seeking better lives. Few seem to realize their aspirations.

My visit to Johannesburg resulted in a proposal for a new building typology, one that could begin to address the pervasive disrepair, lack of adequate housing, and employment crisis of Hillbrow. In the context of low-value real estate and lack of private or public funding, the traditional approaches of European-influenced architecture seemed misplaced and fundamentally alien to South Africa. A native building here should be somewhat rough, very tough, mostly open-air and largely open-ended. 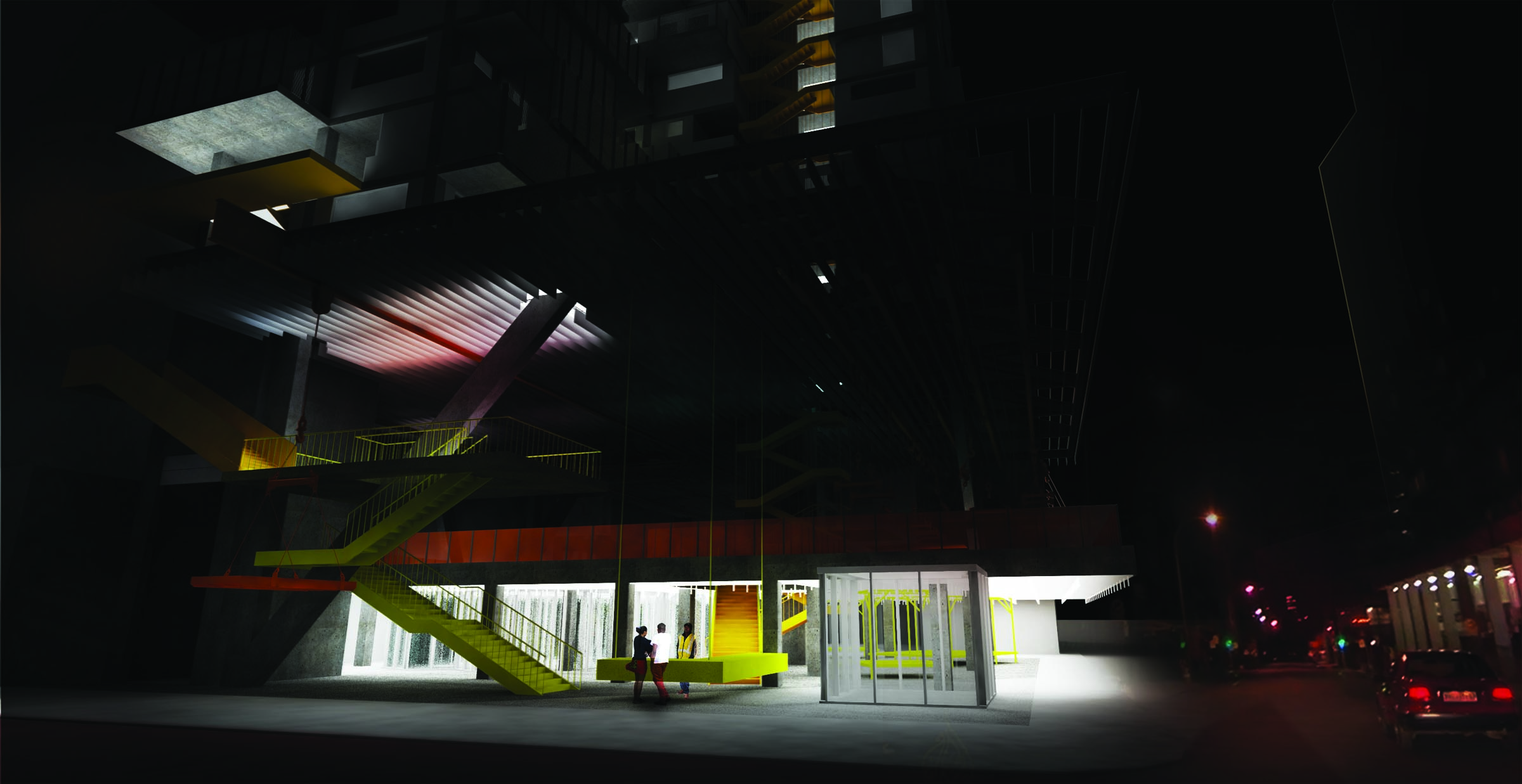 The Building Repair Yard and the Building Repair Guild were our responses to the conditions of Hillbrow and Joburg. We proposed a new typology that would combine transitional housing and job training for immigrants while providing an engine for the material repair of its neighborhood.

The notion of guild suggests the historic practice of experienced professionals passing knowledge to new generations. In the Building Repair Guild immigrant apprentices would live beside mentors to learn new productive trades in a construction and materials facility – the Building Repair Yard. Architecturally, the project becomes a conceptual and literal platform for training and construction floating above an open public ground level dedicated to community programming. 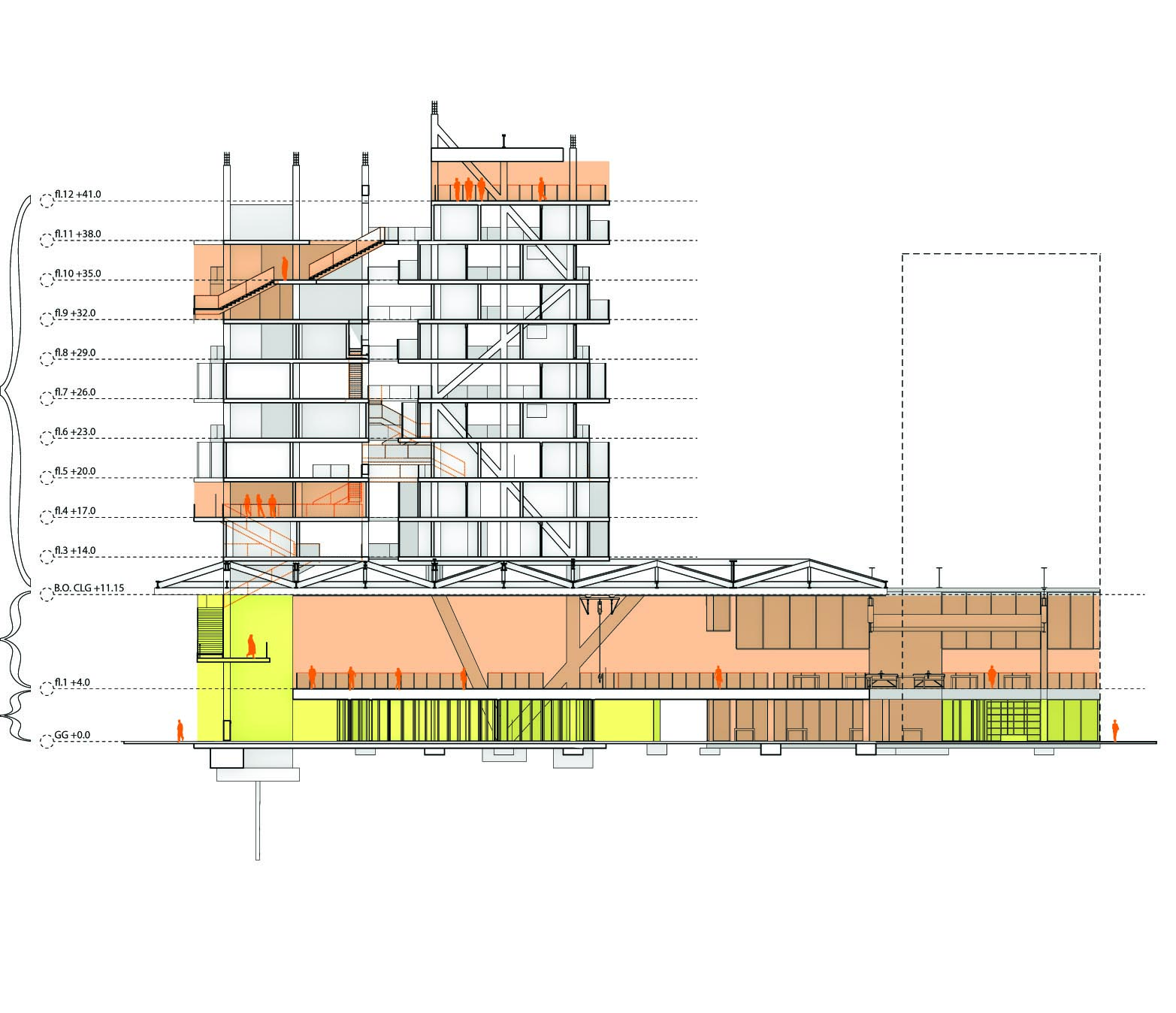 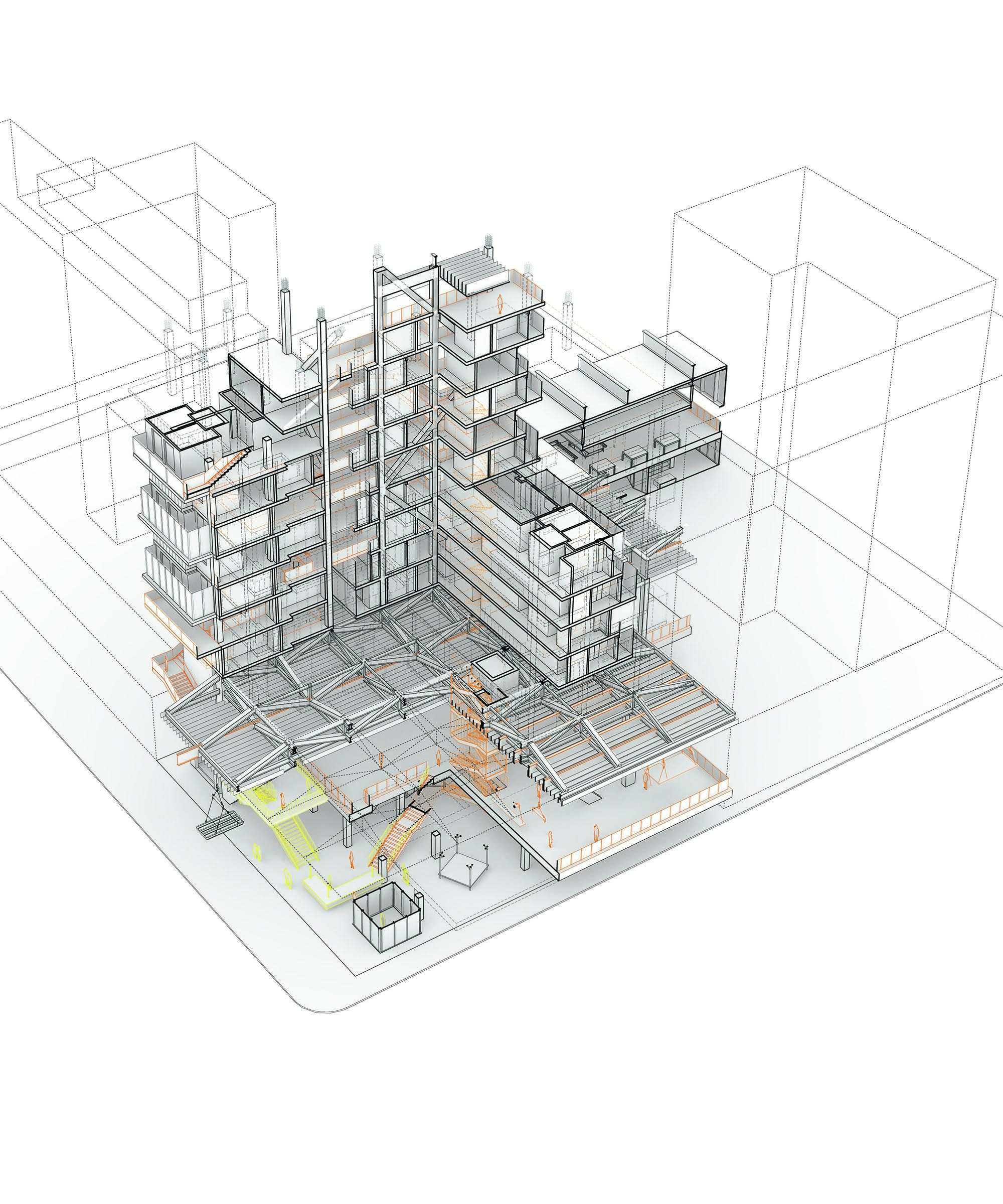 Inside the Building Repair Yard, new and reclaimed building materials could be reprocessed into new replacement building components. The virtually open span of the yard’s 2,100-square-meter floor plate would allow the facility to function as a proxy construction site for nearby projects that are too spatially constrained for adequate construction operations. The housing portion of the guild would be conceived as open-ended construction which could grow over time as the guild expands – each successive generation building new additions slightly different than previous versions. The dwelling areas would be suspended above the urban environment and the yard and would combine short term, incubator housing for transient populations with permanent housing to provide both vibrancy and safety to each group.

The project attempts to facilitate a layered form of social life where variously scaled ‘living room’ spaces are shared (or not shared) with neighbors. Social networks are strengthened through a collection of private, semi-public and public spaces where domestic life is lived largely in the open-air.

John Barrett, LEED AP is a design associate at SHoP Architects in New York where he works on large-scale master planning and development projects. This semester he is a visiting critic for the seminar Man, Machine and the Industrial Landscape taught by Sean Gallagher at GSAPP.