New Practices Sao Paulo is part of a biennial juried portfolio competition and exhibit organized by New Practices Committee of the AIA New York Chapter to promote new and emerging young architectural firms both in the US and abroad. Denise Hochbaum, Brazilian born member of the New Practices committee, was the liaison to Sao Paulo for the New Practices exchange.

A thread among the projects is a certain connection to some of the ideas that made Brazilian architecture so relevant in the past, like the design sensibility that makes seductive use of light, shape and space, and the inviting relationship of inside and out. But another common denominator is that this sensibility is very much fueled by an awareness of the new design concerns that spans the globe, in a deeper and broader way than previous European or American influences. These architects intend to express their original voice rather than let it be diluted under trendy “trends”.

Adding to the models in the show, the Center hosted a panel discussion with the selected architects giving a brief overview of their work following a discussion on issues revolving around the practice of architecture in Sao Paulo and Brazil in general. The panel, moderated by Joze Armenio de Brito Cruz, Brazilian architect, and Toshiko Mori, member of the World Economic Forum’s Global Agenda Council on Design, was informative about the process of establishing a design office down south and very telling of the creativity and professionalism that these individuals had as they approached such challenges. 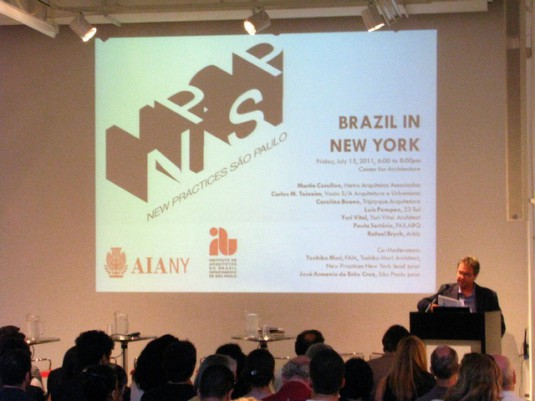 One of the highlights of the show is “Harmonia 57”, a project by French-Brazilian office Triptyque that uses water as one of its main elements. Both ground and rain water go through a complex reuse system, with the simplest element of it, the pipes, being used as a design element to cover the exterior walls. Small cavings on this wall were then planted creating a veritable garden wall. According to the architect’s blog, the design “breathes, sweats, ages and regenerates”. Originally intended as a multi-residential building, it ended up being rented by the upscale Brazilian lifestyle retailers, FARM, to be their Sao Paulo outpost. This project encapsulates so much of what is happening in Sao Paulo and in Brazil today: creative and new ways to use natural resources, a dual-nationality practice that shows the country’s global presence and a booming economy that enables high-end retail to take over dwelling spaces. 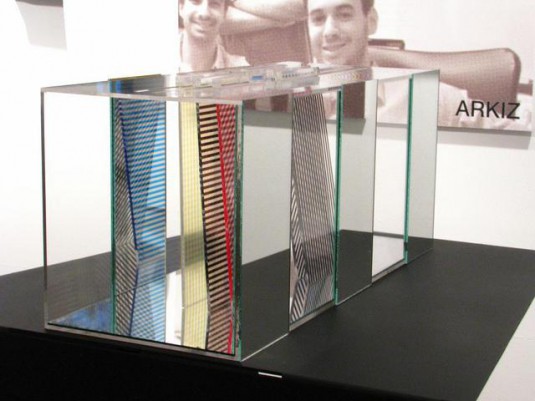 “The exhibit in New York is an important window in this creative and thriving momentum that our country and professionals are immersed in,” says Roberto Cocenza, organizer/curator of BoomSPdesign, the yearly design and art international forum happening in Sao Paulo late Summer. Cocenza knows that momentum very well and one could say he is a part of it, since his event has become an important connector between that city’s zeitgeist and the global one. His keen eye has selected MGMF, already an award winning young practice, to be among the talented new architects the conference will showcase this year.

These architects seemed to have figured how to negotiate this new creative moment quite well. Victor Paixao, one of the architects at PAX.ARQ, comments on how Sao Paulo has grown faster than it could adapt to the growth and how enriching, in more than one way, this has made the metropolis. “We know how to live with the worldly cultural differences, and inspirations the city offers, and we try to make each project to be its own entity, but with respect to the very mixed influences we are subject to.”

Known for its sophisticated, suave sensibility, both in music, art, design and architecture, Brazil’s creations are once again experiencing a boom that is well know and seen widespread in fashion, music and furniture design. This exhibit shows us that architecture is also a strong factor of this creative moment and that these architects talents and determination will have lasting effects, creating the Sao Paulo (and possibly London, Barcelona, Tokyo and beyond) of tomorrow.

Paul Clemence is an award-winning photographer http://paulclemence.com who specializes in capturing the expressive side of architecture, creating through his unique angles iconic images of contemporary and modern buildings all over the world. He exhibits both in the U.S. and international fine art circuits and is a published author. Over 6,000 people follow his Architecture Photography Facebook page http://www.facebook.com/archi.photo .