Looking for the essence of what matters

I’m a writer, so naturally I love words. I love the way they look, sound, are strung together. I love learning about their origins and watching their evolutions.

Words on a page can be a painting, spoken words a symphony.

Simplicity … a landscape of a lake, a meditative solo on piano.

Complexity … the spikes and spires of a Manhattan skyline, the frenzy of a jazz jam session.

As words, and as concepts, simplicity and complexity are opposites. But they are not necessarily opposed; their duality provides balance. Even within most things perceived as “the epitome of simplicity”—an iPhone, say, or a cobweb—is complexity; it’s just hidden from view, or seen only on close examination. The simple beauty, the elegance, is in the design, and in the execution. This perfect balance is abundant in nature but scarce in man-made products.

There is another kind of complexity that is ugly and awkward and, unfortunately, ubiquitous. It is an evil alter ego—masquerading, sashaying, trying to be more than is really needed. It is jargon and legalese and acronyms. It is an avalanche of instructions accompanying the remote control. It is a litany of laws and labels and mandates and healthcare websites. It is a barrage of codes and passwords and tweets and apps and … well … crap.

Simplicity expert Irene Etzkorn says this kind of complexity is a “thief,” and that we as citizens and consumers, must be vigilant.

I had the pleasure of hearing Irene speak at a recent event put on by a client of mine, Configura.

“We live in an increasingly complicated world, filled with more choices than we can consider, with gadgets we can’t use, instructions we can’t follow, documents we can’t decipher, signs we can’t understand,” she said to an audience of more than 250 interior designers and office furniture manufacturers who had gathered for Configura’s annual user conference in Grand Rapids, Michichgan, Oct. 9-10.

Irene is chief clarity strategist for SiegelVision, a consulting firm based in Manhattan. A native New Yorker, Irene knows complexity, but she can see the city through the skyscrapers.

In her 30-year career, she has focused on simplifying customer “touch points” for companies, governments, and health care, and educational institutions. She helped to create the 1040-EZ tax form and the first insurance policy that you could actually read cover to cover. Most recently, she and colleague Alan Siegel co-authored the book Simple: Conquering the Crisis of Complexity.

So, what is simplicity? The irony is, its definition is complex. Another irony: the word itself is a compound—complex—word.

Here is how Irene defines simplicity:

“At first glance, simplicity is a design aesthetic—minimalism, absence of color, clean lines. A second pass suggests that clarity makes for simplicity—something with a clear intent that quickly conveys its purpose or use. With even greater magnification, you find that it’s about essence—cutting to what matters, delivering substantive content that seems to speak just to you. Lastly, it’s not about what is there but what you take away—a feeling of confidence, of trust, of satisfaction. So, for me, simplicity has no synonym –it’s not just convenience, clarity, usability, timeliness or beauty. It’s the sum of all of those, and that’s why it is so rare.”

John Maeda, president of the Rhode Island School of Design, offers 10 laws of simplicity. An overview of his book by the same name says, “Finally, we are learning that simplicity equals sanity. We’re rebelling against technology that’s too complicated … But sometimes we find ourselves caught up in the simplicity paradox: we want something that’s simple and easy to use, but also does all the complex things we might ever want it to do.”

Across the Atlantic, Sune Rydqvist dealt with this paradox, his experience leading to the founding of Configura in 1990. The Swede, who owned an office furniture company at the time, dreaded selling his products using computer-aided-design tools. Now, CAD’s great, but it requires a lot of training to be proficient—and just maybe there were people like Sune who didn’t need all of that up-front complexity. Sune sought a solution that simplified the selling of complex, configurable products—a calculation tool, more than anything.

For help, he turned to his son, Göran, then a programming student at Linköping University, Sweden’s leading technology school, about two hours southwest of Stockholm.

I met Göran in 2008 when Configura sent me to headquarters (in Linköping) to learn more about the company so I could help them to tell their story here in the United States. Well, every story has characters. To me, Göran is the Swedish equivalent of the California surfer dude who aced his ACTs. Maybe it’s the blonde ponytail. Or the Frisbee golf thing. Or the souped-up Toyota. Or the “side hobby” designing sound systems that start at $50,000. Göran is one of those geniuses who makes everything, even being a geek, seem cool. 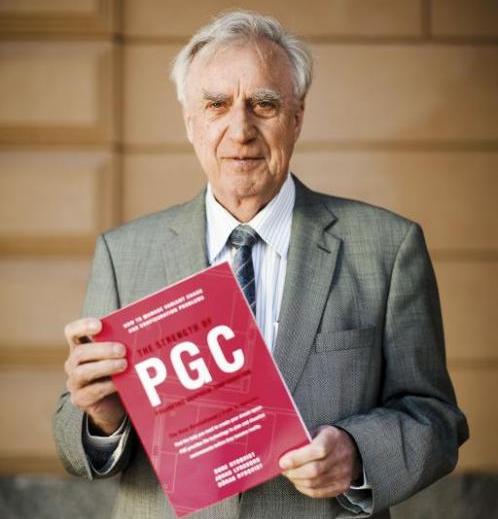 He said to his dad way back when, “It’s not you. It’s the tool. CAD is wrong for what you need to do.”

Göran saw the solution through the software, because he empathized with the user.

He set about creating a solution—which he calls Parametric Graphical Configuration, or PGC—that “puts data in its proper place”—behind the scenes, where it is handled solely by the software, not the user. What the user sees—instead of the usual 2D line drawing and myriad menus—is a much more visual 3D interface, a virtual reality where icons represent multitudes of products. Not only that, the icons are smart—with product information (parts numbers, prices, etc.) embedded in them. More than just being visual, the software is intuitive—it helps the user to learn the product.

Working with Göran was his best friend Johan Lyreborn (also then a student at Linköping). Johan—another character, but that’s another story—would eventually become CEO of Configura.

If the CAD-based software that Sune had been using was like planning a trip with a paper map and a calculator, then Göran and Johan’s software was the equivalent of using Google Earth and Expedia. Technology simplified and empowered the experience.

Sune and employees at his office furniture company were the first to use the software, which eventually evolved into CET Designer—CET stands for Configura Extension Technology.

A Finnish company, Martela, signed on in 1993 for the solution. Then, in 1996, Sweden’s largest producer of office furniture, Kinnarps, became a client.

The company entered the North American office furniture market in the 2000s, signing Steelcase, Haworth, Teknion, KI, Inscape and others as clients.

Globally, more than 10,000 people—primarily dealerships’ interior designers and, to some extent, salespeople and even designers at A&D firms—now use the company’s software.

Despite these major customers and strong user numbers, it hasn’t been an overnight success story—and that may very well be because people have a hard time changing, even if the present situation is difficult and the potential situation promises ease.

“It’s a complicated ‘sell’ when you explain how CET Designer is different than CAD-based products. And because it’s different, it means you have to change how you work,” Lyreborn said. “Well, ‘change’ is a scary word for some. But what’s scarier is being left behind. Staying stuck in neutral won’t win you more work—others will fly past you.”

Indeed, Irene Etzkorn says many people don’t even realize they’re in a crisis of complexity, so complacent we’ve become in accepting the status quo.

And, Irene says, we’ve done it to ourselves by demanding myriad choices.

“People say they want choices … they don’t like the idea of giving up choices … but then when they actually experience all of the choices … the reality is they’re overwhelmed,” she said.

“We are drowning in information, while starving for wisdom,” Pulitzer Prize-winning entomologist and biologist Edward O. Wilson said. “The world henceforth will be run by synthesizers, people able to put together the right information at the right time, think critically about it, and make important choices wisely.”

And that’s why clarity strategists like Irene, and products like Configura’s, are absolutely needed and will prevail. They help us to cut through the clutter and put complexity’s evil alter ego in its place.

“Simplify, simplify,” wrote writer, transcendentalist and philosopher Henry David Thoreau all the way back in 1854.

I wonder if he was gazing across that famous lake called Walden Pond.

Another great presentation on simplicity, this one by John Maeda, president of the Rhode Island School of Design:

Molly Klimas is a writer, photographer, and owner of a boutique public relations firm, IntentPR, in Grand Rapids, Michigan, USA.