A cartographer and a photographer capture the secret life of power lines.

There’s been much debate over the placement of wind farms, like the well publicized NIMBY’s in Cape Cod fearful of turbines marring their coastal views. The aesthetic controversy becomes all the more interesting when considered against our current relationship with existing energy infrastructure.  We’ve learned to ignore the high-tension power line, that great and undulating beast on our landscape. Photographers Brian Rosa and Adam Ryder hope to change that.

The duo won a grant from the Rhode Island Arts Council to examine the topography around power lines in that state. Using aerial photographs, land use maps, and handheld GPS systems, they identified power line systems and then set out on foot to see what they would find. They captured the experience in photographs and the result is On the Grid, an exhibition now on display at the Stairwell Gallery in Providence, RI.

Rosa and Ryder found an entire exosystem, a hidden world within the shadows of these mammoth, buzzing structures. In some areas, wildlife thrived. In others, the relative seclusion and isolation created by the manmade structures encouraged various groups to use the land. They saw people walking their dogs or riding ATVs. They found evidence of bonfires. Most compelling, perhaps, was putting the system as a whole into perspective. In an interview with NPR’s program Living on Earth, Ryder explained it this way: “What’s really awesome about seeing this parade of power lines through the landscape, especially in rural areas, is that we’re kind of seeing these tendrils connecting humanity as one large organism and it’s a cool way of looking at us.” 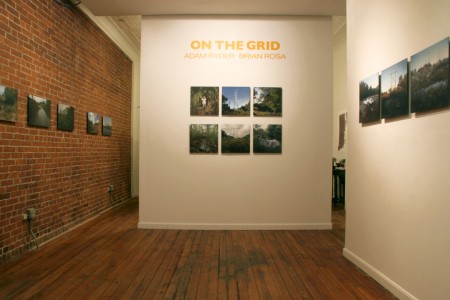 On the Grid will be exhibited at the Stairwell Gallery through February 1.