On the Road with the Rudy Bruner Award: Louisville Waterfront Park

After our visit to Inspiration Kitchens – Garfield Park in Chicago, our Bruner Foundation team headed south to Kentucky to Louisville Waterfront Park. Submitted by Waterfront Development Corporation Inc. (WDC), the 85-acre riverfront park, which was developed over more than two decades, reconnects the city of Louisville with the Ohio River.

We arrived in Louisville to spring-like weather in time to join the city in cheering on the University of Louisville Cardinals men’s and women’s basketball teams in their national championship games. Louisville Waterfront Park is the largest and most established project among the 2013 Rudy Bruner Award for Urban Excellence finalists we’ve visited to date, including Congo Street Initiative, Via Verde and Inspiration Kitchens. We spent two and a half days on site, touring the park and meeting with WDC staff, board members, and consultants, as well as event sponsors and representatives from the design community and mayor’s office. 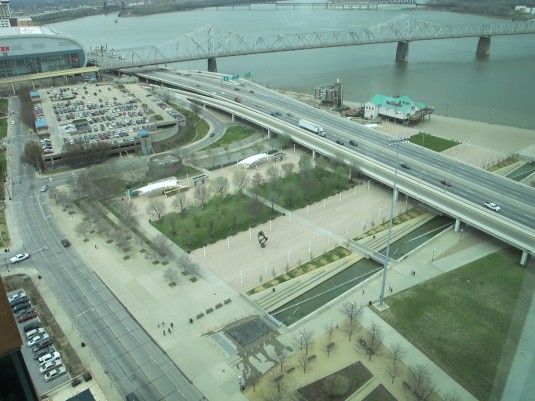 Festival Plaza and the Great Lawn offer spaces for large events and connect downtown Louisville with the river.

Louisville Waterfront Park has transformed industrial land along the Ohio River occupied by an elevated highway, sand and gravel companies, and scrap yards into a new riverside park and gateway to the city. Planning for the park began in 1986 with the creation of the WDC, a quasi-public agency that was incorporated to oversee the development of Louisville’s riverfront. WDC held a series of ten public meetings soliciting input on proposed development of the site that yielded a strong desire for green space. Subsequently, they initiated an international search for a design firm beginning with a Request for Qualifications to which 85 firms responded. Hargreaves Associates, one of four firms invited to Louisville to meet with WDC and city representatives to present its ideas, was ultimately selected to create the master plan and design for the $95 million park.

This park plan illustrates its features.

The park provides much-desired green space for the city as well as visual and physical connections to the river. Its linear configuration stretches east to west along the Ohio’s southern shore in a series of linked spaces that include trails, landscaped areas for active and passive activities, children’s play areas, and public art. At its center, the Great Lawn and adjoining water feature draw people from downtown to the river’s edge. The lawn is tilted from the higher city elevation toward the water, opening river views from downtown under the elevated highway while still protecting the city from periodic floods. A memorial to Kentucky native and our 16th president, Abraham Lincoln, includes interpretive panels that highlight his life and how his visits to Louisville influenced his views on slavery. Two privately operated restaurants provide riverside dining; a boathouse and marina offer access for rowers and motorboats. 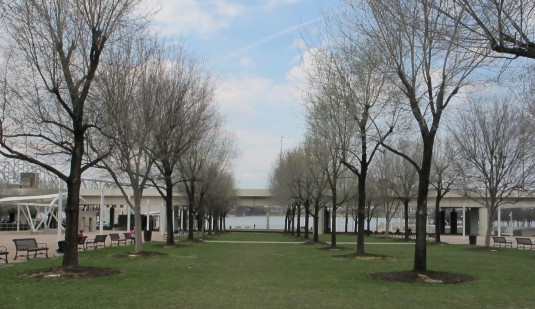 The grade of Festival Plaza is tilted to provide views from downtown to the river.

The park was constructed in three phases. The first phase focused on the western area immediately adjacent to downtown, the second on the eastern end, and the third on the remaining center section. The Big Four Bridge is the most recent addition to the park, rehabilitating a former railroad structure into a pedestrian and bicycle-bridge that spans the river and will eventually connect Kentucky with Indiana when the northern landing is complete. 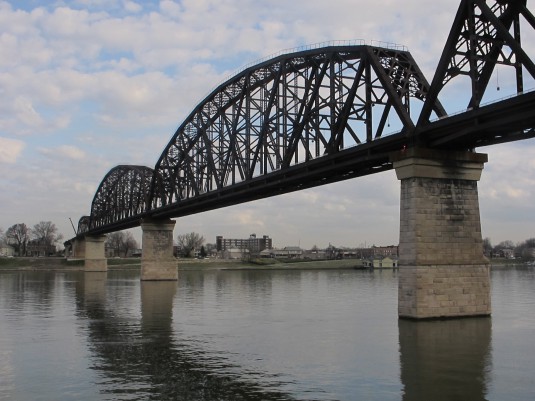 Two thirds of funding for the park’s development was provided by the city, county, and state, with the remainder coming from corporations, foundations, and individuals. Today, the county and state continue to provide the majority of its funding, and it generates income from event rentals and business leases.

More than 120 events are held at the park every year. These include concerts, walks for charities, and sports events. Large special events like the Fourth of July Independence Festival and fireworks and the Kentucky Derby Festival’s Thunder Over Louisville draw thousands. The park is also home to the Belle of Louisville, a historic paddle wheeler operated by WDC that offers educational programming for children and adults. 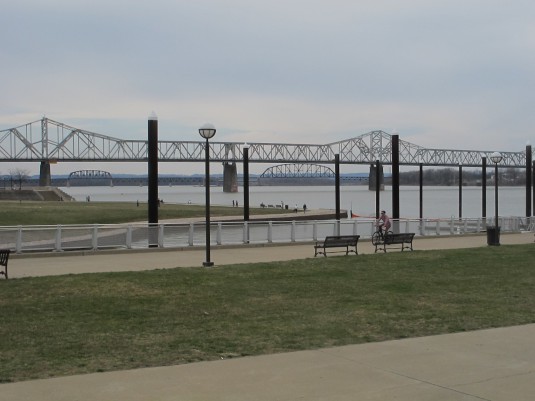 A waterfront trail provides views of and access to the Ohio River. 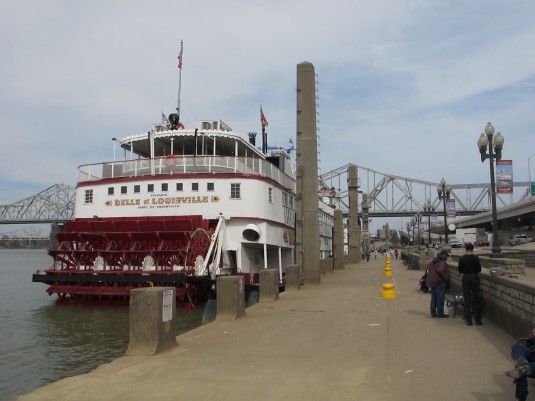 Since its inception over 25 years ago, Louisville Waterfront Park has become a new town commons for the city, attracting over 1.5 million visitors a year. It has sparked an estimated $1.3 billion investment in the Waterfront District including residential apartments and condominiums, Louisville Slugger Field, and the Yum! Center sports and concert arena. The park has garnered attention from other waterfront cities and is one of five from around the world featured in the current Reclaiming the Edge: Urban Waterways and Civic Engagement exhibit at the Smithsonian Anacostia Community Museum in Washington, DC. 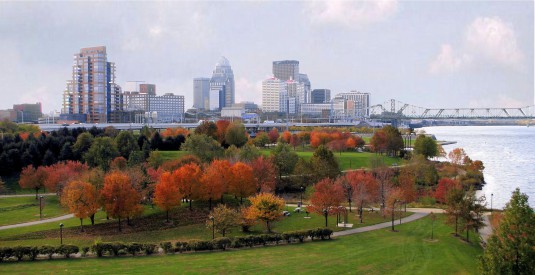 A fall view of the park toward downtown Louisville.

After enjoying the warm weather in Kentucky, we head back north next to Providence, Rhode Island, for our final stop, The Steel Yard.