As Philadelphia Revitalizes, “Hidden City” Spotlights the City’s Past

Visit Hidden City Philadelphia 2013 this weekend, before it closes

The post-industrial decline of American cities has long been a source of handwringing for planners and politicians, but for a less vocal constituency, it has also created a vast playground. From ravers to punks, the abandoned buildings that litter the urban landscape have long been the source of cheap, impromptu venues. For graffiti artists, the neglected city became a nearly endless canvas. The less boisterous and merely curious, meanwhile, have coalesced under the heading of “urban explorers” who poke around rusting infrastructure, climb into open manhole covers, and follow their noses onto closed-off properties. Some groups, like Paris’ mysterious UX, are legendary for their exploits.

In Philadelphia, a poster child for post-war decline now on the rebound, that impulse has led to the second quadrennial iteration of Hidden City, a six-week festival that attempts, according to Peter Woodall, community relations director and himself a connoisseur of Philly’s abandoned buildings since his teenage years, to “introduce the city to people who already live here.”

In 2009, that meant staging performances in extravagant but derelict spaces that were hiding in plain sight tantalizingly close to bustling Center City, like the Metropolitan Opera House. The spotlight generated enough interest to catalyze the slow process of preservation, restoration, and reuse for some of the sites. Four years later, the focus has changed on the one hand to promote socially engaged artistic installations and on the other hand to expand its geographic scope.

In just a short time, the ongoing revitalization of downtown Philadelphia has shrunk the inventory of abandoned buildings that no one knows about, but also became an opportunity to shine a light on the diverse neighborhoods where the conditions of urban disinvestment are depressingly pervasive. Still the country’s fifth largest city, but also a quarter smaller than its peak population of around two million, Philly’s colonial vintage and Industrial Revolution growth spurt provided it with a wealth of architectural styles and historical sites that few of its peers can match. The result is an impressive and balanced mixture that draws as much on occupied buildings, from the monumental to the vernacular, as it does on Hidden City’s stock in trade of vacant spaces. With nine locations spread out across the city, there is, as the cliché goes, something for everyone, from preservationists to architects to amateur field naturalists to history buffs.

The newcomers to the Hidden City leitmotif are indeed some major Philly landmarks, if lesser known than the Liberty Bell, presented with a twist. The Athenaeum, housed in a handsome Italianate-Revival brownstone, is a member-supported library founded in 1814 with a focus on American architectural history. Its collection is not open to the public – hidden, in its own way – and it took some serendipitous archival research to uncover both Edgar Allen Poe’s signature in the register from 1838 as well as the Athenaeum’s book on the one-time Philadelphian (1837-1844), whose only surviving home in the city is a National Historic Site. For artist Ruth Scott Blackson to make the cognitive leap from the book’s black-and-white description of Poe’s house to extrapolating actual hues from the Munsell color system recreation is marvelous but also pragmatic, suggesting a tool for preservationists working hand in hand with architects on restoration projects.

Across downtown on the banks of the Schuylkill River, Hidden City gained access to a disused swimming pool in the otherwise very active Fairmount Water Works Interpretive Center, a popular destination for school groups in the magnificent early 19th century complex of Palladian façades now on the National Register of Historic Places. Inspired by an era when municipal waterworks were worthy of architectural distinction, artist collective Camp Little Hope has turned the former natatorium into a bibotorium (“drinking space”), and set up a bar made of salvaged wood in the empty pool in order to serve homemade iced tea. The situation highlights the limits of Hidden City’s ambitions: 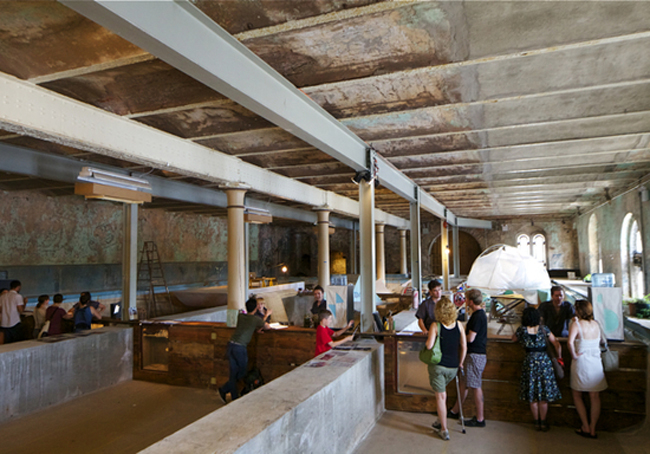 Plans to refill the pool were nixed because it’s no longer watertight, while brewing beer with Schuylkill water was also off limits. But the resulting installation takes an innocuous concept and turns it dystopian, with the concrete bowl serving as an ongoing boat-building workshop for speculative futures in which climate change has flooded the streets, the water supply privatized and sold to Coca-Cola, or fracking for natural gas has poisoned the groundwater. As artist Isabella Martin pointed out to me, the latter two are not merely futuristic. The existence of the Water Works is a testament to a 19th century decision not to privatize water, and the Schuylkill suffered the intense impact of coal mining in the early 20th century. Drifting lazily outside the window and just below the gazebo that is a classic Philadelphia wedding photo-op, the river water makes a turn from picturesque to sinister.

Reminding urbanites of the nature in their midst is another strength of this year’s Hidden City. Indeed, the Bibotorium sits just a few yards off the Schuylkill River Trail, the region’s most popular spot for joggers and cyclists, and it continues to inch its way downriver, piece by piece, into the industrial maw of oil refineries and scrap yards that characterize the waterway as it dumps into the Delaware River. Ambitious trail advocates hope for an eventual extension all the way to Revolutionary War-era Fort Mifflin at the Schuylkill’s mouth, tucked behind the Philadelphia International Airport. Yet despite the engineered landscape – the porous riverside, dotted with islands, was drained and filled over the 19th and 20th centuries – a remarkable oasis of wetlands and wildlife remains on the grounds outside the fort’s walls, also on the National Register.

The marshy trails, dotted by the ruins of an aborted gun emplacement, became Ben Neiditz and Zach Webber’s setting for a motley collection of tree-houses, teepees, and shacks cobbled together from the detritus and driftwood that washes up on the riverfront beach. The installation feels hidden even from the site itself. I ultimately had to ask a colonial re-enactor, who was more interested in firing muskets to the delight of elementary schoolers, to point me toward the sea wall that led off into the woods. Once there, my incertitude about whether a given lean-to was part of the exhibit or somebody’s temporary shelter (homeless encampments crop up under bridges, why not behind the airport) was apparently intentional. As Neiditz explained in an e-mail interview, “It is this unsettling or destabilizing effect of not knowing and the subsequent creation of multiple narratives that we wanted to maintain in our current installation.” 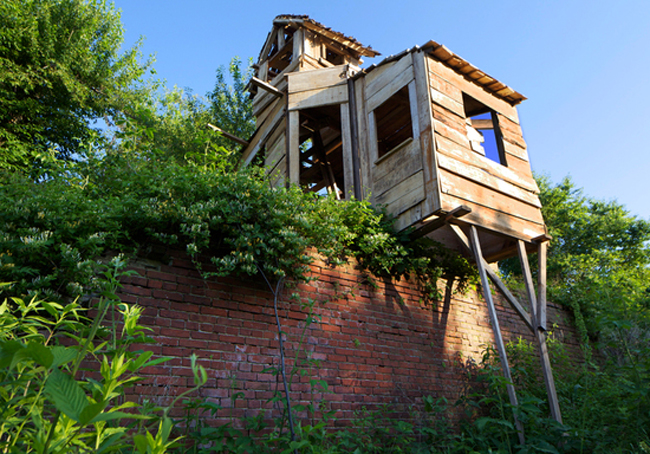 Conjuring up both the innocence of backyard tree forts and the hard realities of tropical shantytowns, Neiditz continued, “It became clear that we were applying our own fantasies to the landscape: [. . .] 1800’s marsh settlements, post-apocalyptic sci-fi, environmental crisis, and fairy-tale evil.” The high-minded conceptualism may not resonate with all visitors, but the payoff at the end of the trail, an elaborate structure whose ladder-accessible top window has a unique postcard view over the skyline, certainly will.

Back in the heart of the city, Hidden City draws on an eclectic selection of places where installations will hopefully catalyze reuse. Germantown Town Hall, an ornate, rotunda-capped Beaux Arts treasure, was built in 1915. It towers over a proud neighborhood, nearly as old as Philadelphia and an independent municipality until 1854, that has been enamored of the opportunity simply to walk inside, as the doors have been shuttered since 1998. By making visits free for neighborhood residents, Hidden City is stimulating a community conversation about the building’s future. Shivtei Yeshuron-Ezras Israel, aka “The Little Shul,” is the last testament to Jewish row-house life, a synagogue crammed into the first floor immediately past the iconic marble stoop. While hardly abandoned, the possibility for Hidden City’s building-scale knitting project to inject new blood into the older congregation – plenty of young Jews have moved to gentrifying South Philly without knowing about the neighborhood’s pre-war demographics – could very well translate into a packed sanctuary come Rosh Hashanah.

Last and most promising, according to festival organizer Woodall, is Hawthorne Hall along Lancaster Avenue, the country’s first private turnpike, in a part of West Philadelphia revitalizing under the watchful eye of Drexel University and the University of Pennsylvania.  Once a fraternal lodge, the decaying interior has been magically transformed by artist collective Rabid Hands into an imagined secret society.  An incredible attention to detail reveals hallways, a sanctuary, a dining room, secret doors, and seemingly endless rooms to explore, decorated with curio cabinets and ephemera that evoke the mythical Society of Pythagoras through the eerie recurrence of a geometric symbol. 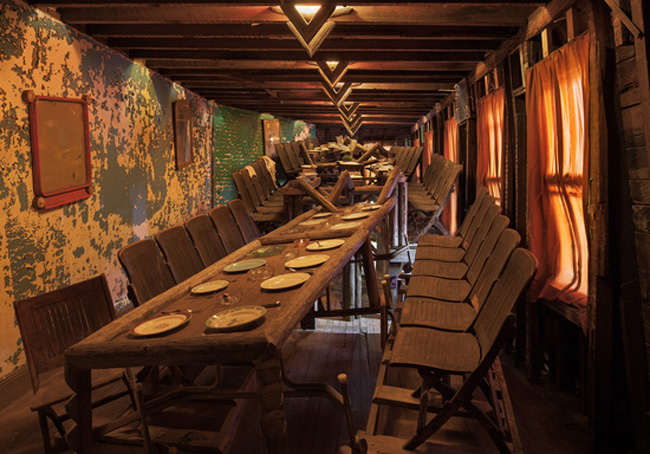 The imaginative interior decoration, largely accomplished with recycled or repurposed materials, is easily the festival’s most immersive experience, reminiscent of The Pier Group’s derelict Spanish galleon at last year’s Burning Man art festival, replete with a page-turner of a captain’s log.  Disappointingly, the Pythagoras artists decamped to Paris for another commission, unable to deliver on their interactive promise of initiation rites and mysterious ceremonies for festivalgoers. But the richness of Hawthorne Hall, the open windows peering over a neighborhood in transition, is a clear reminder of how potent a canvas the city can be as not just a tabula rasa like the Black Rock Desert, but a social organism where art and design have tangible consequences.

Greg Scruggs is a freelance writer about cities and culture. He lives in Philadelphia.