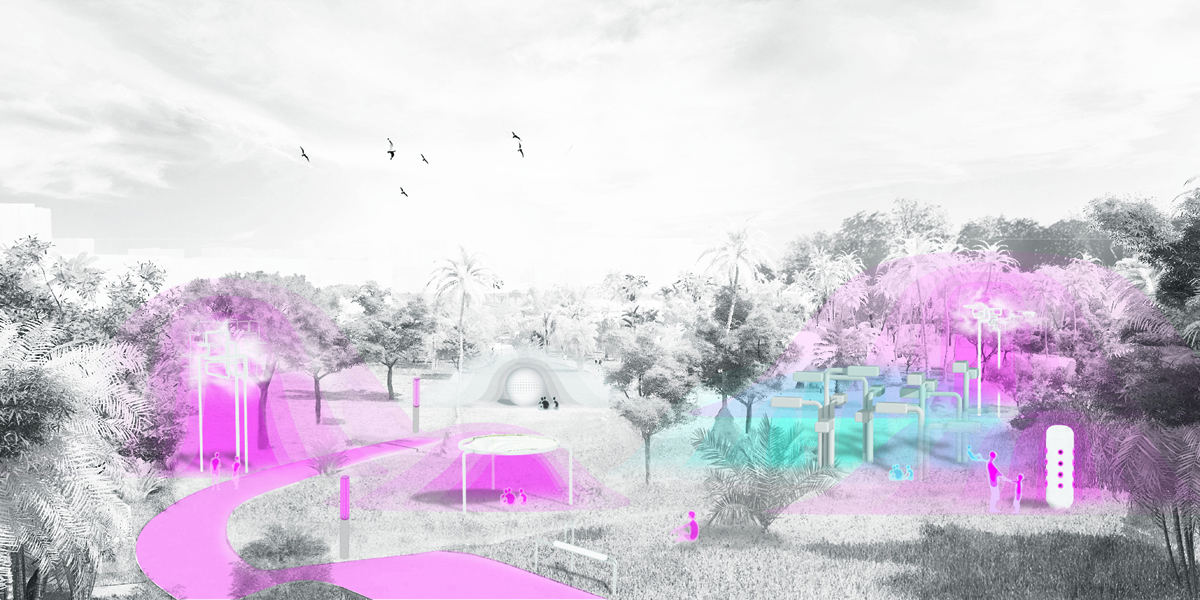 Jade Eco Park
Composed of diverse weather zones, the soon-to-be completed park in Taichung, Taiwan, is Rahm’s biggest exercise in meteorological design. The park has 11 “Climatic Lands,” each with different characteristics—coolness for leisure, dryness for sports, and clean air for family activities.

Can Philippe Rahm actually build what he claims? It’s a question that has been insinuated or asked of the 47-year-old Swiss architect throughout his career. His credo is so abstract it seems far-fetched. “There’s a kind of misunderstanding of what architecture is,” Rahm says. “It’s not to design solid shape and form, it’s to design climate.” His biggest proof of concept to date, however, is now under construction in Taichung, Taiwan. After its completion next year, visitors to the 70-hectare Jade Eco Park can, on any given day, choose to sit in a space where they can swelter in tropic humidity or walk through one where they feel the wind in their hair. It sounds like an amusement park of climatic zones.

This is not Rahm’s first foray into meteorological architecture. He lit the Swiss Pavilion at the Venice Architecture Biennale in 2002 with blinding fluorescent lights and pumped in air with higher nitrogen content to make visitors feel like they were at the top of a mountain. “We used precise lines of light and air composition, because we understand that the space has a physiological relationship with the body,” Rahm says. At the 2008 biennale, he built a replica of the Gulf Stream. The warm current of air that transforms the climate of the Atlantic seaboard was reproduced by the movement of air between two metal plates of different temperatures. To demonstrate its effect on human beings, the installation featured male and female models who stayed comfortably naked even in the slightly chilly evenings. In a review for Icon magazine, the critic Justin McGuirk called Rahm a pervert—not for the nudity, but “because his project is to undo the greatest perversion that we humans have unleashed on nature: modernity.”

No architect would dispute that buildings exist to create sensory conditions of heat, light, and air movement to suit human activities, to shield us from the elements, harness them for our purposes. But the argument that manipulating these elements, rather than configuring brick, mortar, glass, and steel, is the primary purpose of architecture has only dim echoes in architectural history —in pre-Modern vernacular buildings perhaps, or in the writings of great landscape designers. 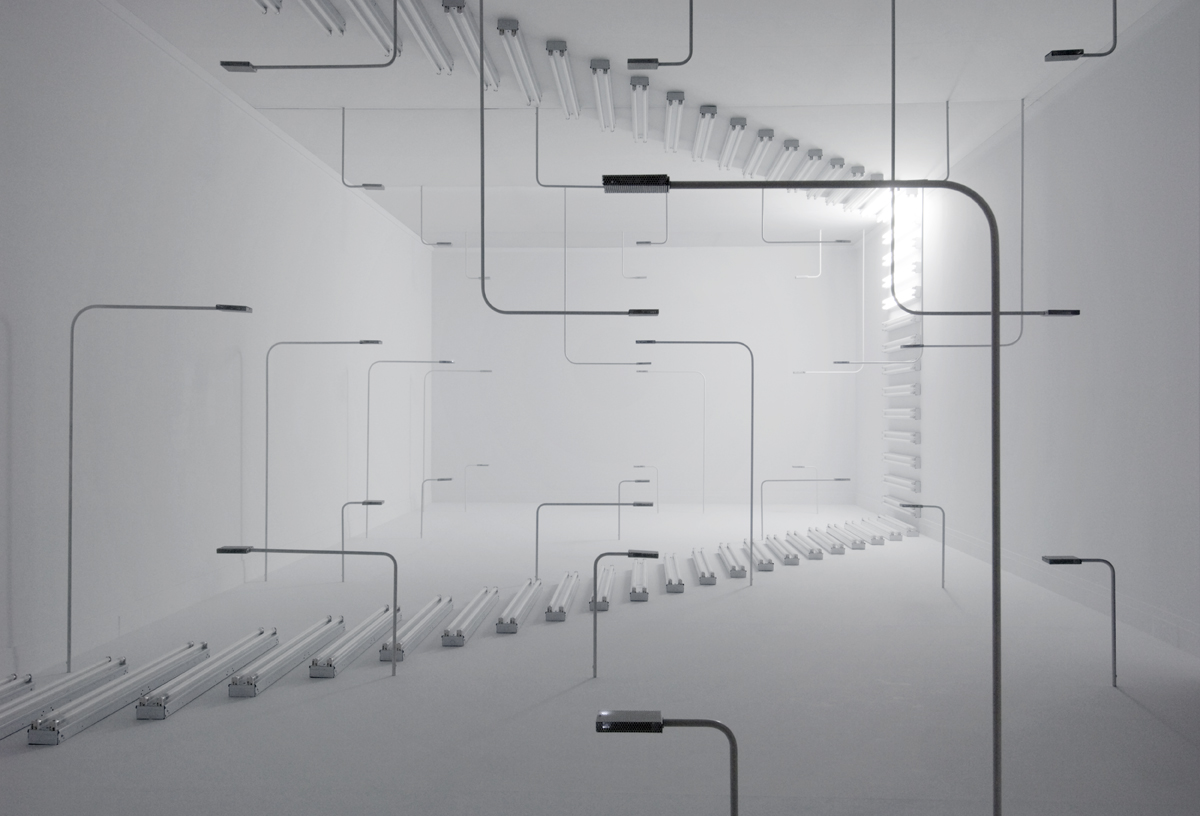 Interior Weather
An installation at the Canadian Centre for Architecture in 2006, the project changed the climate of a room using just three components: temperature, light intensity, and relative humidity.

Rahm points out that the notion of a park as a sort of climatic filter for its surroundings was prevalent in the eighteenth century. “Olmsted created Central Park in New York as a green land that has to clean the air, for the health of New Yorkers,” he says. “When you read Pierre L’Enfant in French, he proposed two of the parks in Paris and the trees in its boulevards. It was not a romantic idea of greening the city—the tree was a machine to create shadows and to cool the street during the summer.”

Rahm’s initial concerns with Jade Eco Park—the warm, humid weather and the city’s polluted air—were much the same. “We started to analyze [the existing conditions of the site] with a dynamic computer model to see where it would be cooler, where it would be dryer, and where it would be less polluted,” Rahm says. The next step was to introduce trees to enhance these characteristics —ones with heavy foliage to encourage evaporation and cool the air in some areas, some with floating roots to absorb humidity and dry the air in other places, and those that can absorb pollutants elsewhere. Interspersed among them were oversized mechanical devices that would perform similar functions: cooling, drying, and cleaning the air in an artificial, precise manner. 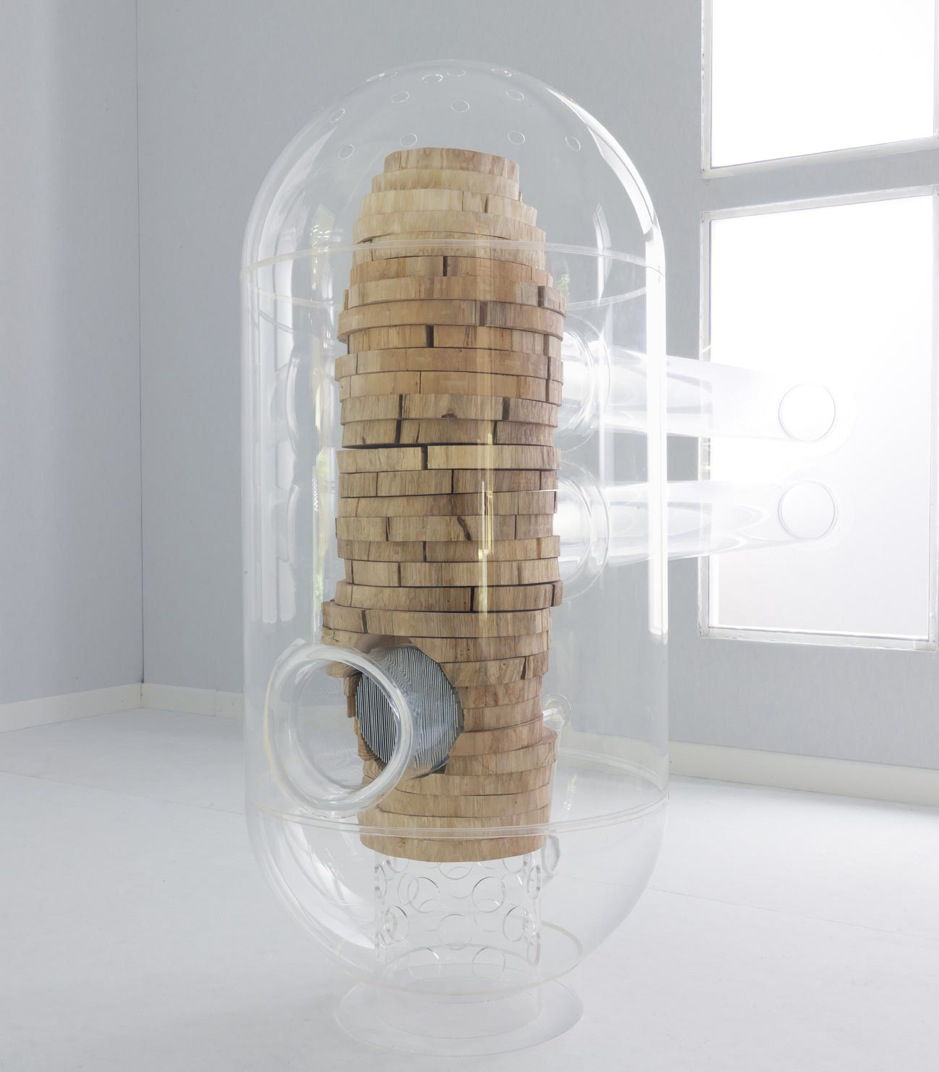 De-territorialized soils
At the Milan Furniture Fair in 2009, Rahm showed a double-flow air exchanger that was a precursor to the climatic devices used in the Jade Eco Park.

Above and below courtesy Philippe Rahm Architectes

The devices, which are being constructed at the time of writing, are a result of a long process of analysis and testing—modeled first at Rahm’s office with data-analysis software, then tested by a German team of consulting climatic engineers. The results had to be independently verified by a Taiwanese team, and by the contractors, before Rahm got the go-ahead to build.

Visually and spatially, Jade Eco Park is a composition of plantings and architectural follies, much like the grand old urban landscapes that inspired Rahm. But it will feel very different. “It creates some random situations,” he says, “which means that sometimes here it’ll be cold, dry, and clean, but there it could be cold, dry, and polluted, or cold, humid, and polluted. Everyone is free to go where they want.” 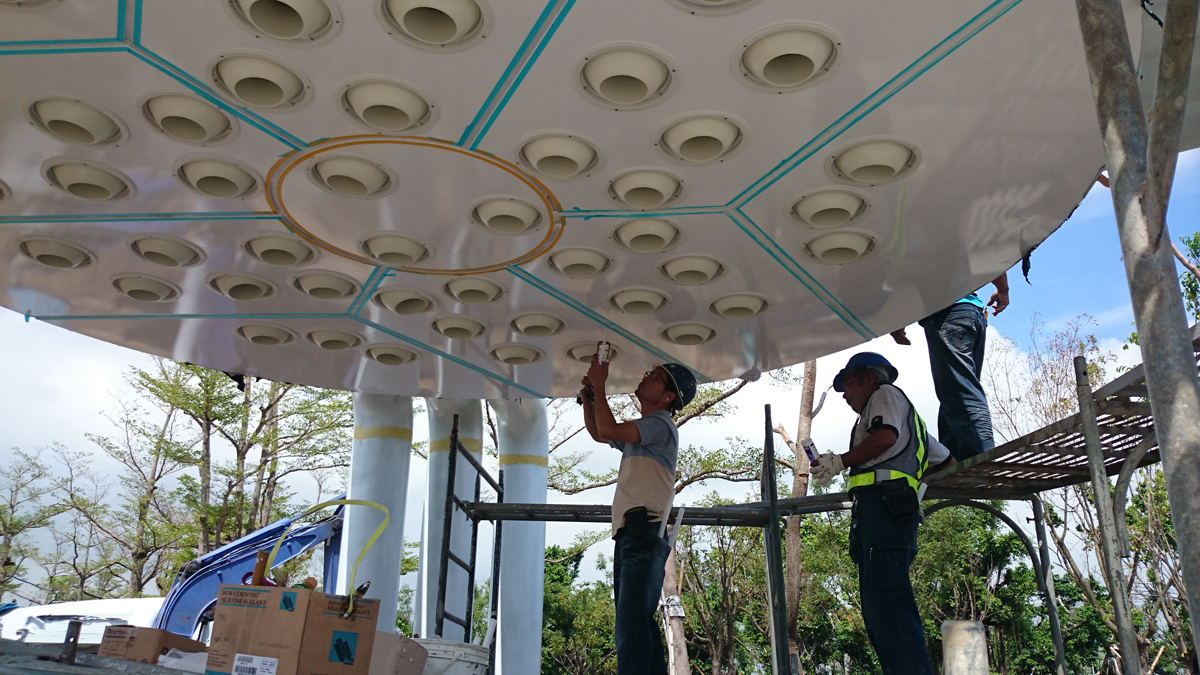 Antycyclone
The construction of the Antycyclone, which blows out naturally cooled air. The design underwent rigorous testing and simulations for climatic conditions to quantify the speed of the air. The device is is being built after an intensive testing process.

All of this is done as sustainably as possible. Air is cooled through heat exchange with the city’s water or with lower temperatures underground, via geothermal ducts. A 75,300-square-foot stretch of photovoltaics provides all the electricity the park needs, and more. Not only are the lights controlled automatically, but sensors placed about every 50 feet provide real-time data on temperature and humidity, so the climatic devices can be turned on or off as necessary. The ability to so finely modulate energy use and climatic conditions has huge implications for the field of sustainable design. “I’m trying to invent a new style of architecture that takes the climate and energy [into consideration] at the beginning of the project and not at the end,” Rahm says.

His architectural mission is broader still. After Rahm presented the Jade Eco Park concept last November at a lecture at the Harvard GSD (where he is now leading a studio), Dean Mohsen Mostafavi protested that he couldn’t see the totality of a park in the design, which seemed to be preoccupied with the discrete climatic zones. The response that Rahm didn’t give, but very well could have, is that his is an invisible architecture. The things that can be seen—the trees and the devices—are merely structural elements. The edifice is the multisensory experience. The response that Rahm did give took exception to the word “totality,” the idea of the architect as master builder that was kept alive by the Modernists and their starchitect successors. “I have no image of the design at the beginning,” he said. “We are trying to use the climate as an element in designing. But not in the Modernist way, determining function and place. We want to create a multiplicity and diversity of [atmospheric] qualities.”