“The Lure + The Perch” Jason Austin, Jack Fanning, Sneha Patel, and Sally Reynolds/Philly Works 2012 “Philly Works is collaborative of artists, designers, and makers all working towards the goal of bettering Philadelphia. It’s a tool for empowering creative individuals in Philadelphia.” That’s the elevator pitch that Will McHale, Katie Winkler, and Alexandra Schmidt-Ullrich use […]

“Philly Works is collaborative of artists, designers, and makers all working towards the goal of bettering Philadelphia. It’s a tool for empowering creative individuals in Philadelphia.”

That’s the elevator pitch that Will McHale, Katie Winkler, and Alexandra Schmidt-Ullrich use when someone asks. “We know what it is but we don’t know where it’s going,” says Schmidt-Ullrich, trained as an architect. That’s not an admission of confusion or drift. It’s more a protective notion that what they have is bursting with ideas, potential, and momentum. To fix it in space and time might, somehow, ruin or limit it. 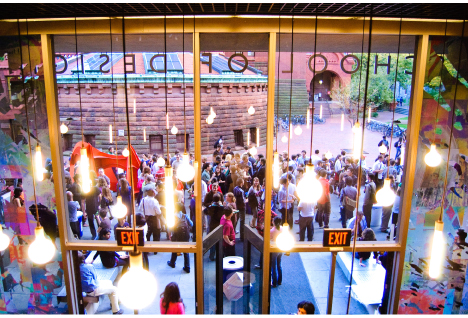 Philly Works emerged from a 2009 Design Philadelphia exhibit put on by people connected with the University of the Arts industrial design department. It’s evolved into a kind of think tank on urban futures–one that celebrates and leverages the powerful legacies of the past–be they buildings, wealth, industrial heritage, stories, or land.

The collaborative’s latest project was the exhibit, “Qualities of Life in Philadelphia,” at the Art Alliance. The exhibition catalog itself was handsomely produced on a tight budget of contributed and out of pocket funds. It is a cornucopia of intriguing ideas and projects that are re-envisioning and revitalizing contemporary Philadelphia. Among them are the relatively established ViaductGreene’s vision for a submerged park along the City Branch railroad connected to the Reading Viaduct and others even more speculative, like Andrew Dahlgren Machine Knitting, which combines old and new technologies to re-invent the city’s once rich textile and knitting industries, and the Philly Fuel Co., a group of planners, artists, and designers who promote microalgae as a viable alternative energy source. 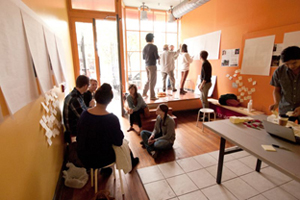 It is telling that the catalog opens with a passage from “The Good Life: How to Live Simply and Sanely in a Troubled World,” by Helen and Scott Nearing. I had the privilege of hearing Scott Nearing speak as a hearty man well into his nineties (he lived to 100). He exemplified someone living his entire life by principles, both personal and political, committed to the healthy, self-sufficient integration of work, life and land.

“Qualities of Life,” too, is about living life well. Life and work intertwined. “Are you happy day in and day out? How do you not get caught in the rat race?” asks Schmidt-Ullrich, rhetorically, about achieving a successful balance.

Consistent with the philosophy of Helen and Scott Nearing, Nic Esposito, founder of Philly Works, member The Head & The Hand Press, describes that the ethos typical of Philly Works participants goes beyond the money or racking up social media contacts. “The most important value to be found in their labor is the quality of life found in their work.”

This year Philly Works sought out makers and other creative sorts to include in the Art Alliance show. “What we’re great at is meeting people, helping them to feel comfortable sharing and collaborating,” notes Katie Winkler. The show’s range of ideas and potential new industries was both impressive and daunting but imparts nothing short of great hope for a city that is such an uneven mix of urban triumph and despair. 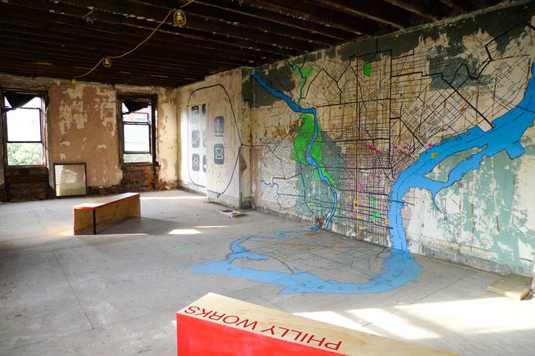 You can pick and choose what interests you from the catalog of projects and written contributions. I was perhaps most struck by the essay “In a state far from equilibrium” (the think tank that has yet to be named: Jeremy Beaudry, Meredith Warner, and Katie Hargrave) that takes an inspired leap from the concept of forest succession (catastrophe, recovery, and regeneration) to “urban succession.”

The analogy of natural processes of decay and rebirth plays out so felicitously that you can instantly convert (in your mind) blight into promise. When you consider, for example, that this city has 40,000 vacant lots, an intellectual framework is essential before you can make a dent. Urban succession, as a concept, could become a tremendous tool for change because it stimulates a less judgment-driven approach to neighborhood development than the usual policy paradigm. 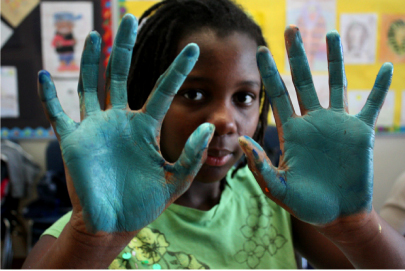 Philly Works founders are well aware they walk a tightrope between idea creation vs. realization, fluid collaborations vs. bricks and mortar. They work hard showcasing products, processes, and services, in effect turning industries inside out. But, cautions Schmidt-Ullrich, “as soon as you develop a mission statement, a space, a type of work, you automatically lose people who were with you from the get-go.”

What they do have now is a growing database of creative individuals and enterprises throughout the city. It’s largely voluntary and some entrepreneurs are wary of having their intellectual property exposed and the location of their project known. The plan, ultimately, is to make the database more user friendly, expanding almost in real time as creative networks proliferate. 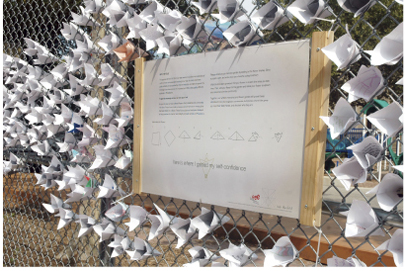 The city, as Philly Works’ living laboratory, provides an endless supply of raw material and social challenges. As designers, their most important discovery and contribution so far is that “Qualities of Life” is for everyone.

Please note: “Ideas Emerge from The Endless Experiment was written for and originally posted on Hidden City Philadelphia on October 25, 2012 (Brin has a regular column –“Walk the Walk”)