The Prudential Center: A Bright Exception to a Dark Age of Urban Planning

An overly co-dependent couple, as any dinner party guest knows all too well, can cast an alienating pall over nearly a whole table. In the world of postwar urban planning this noxiously self-absorbed pairing was played, more often than not, by the conjoined duo of the highway engineer and the forward-thinking corporation. Whether their plans […]

An overly co-dependent couple, as any dinner party guest knows all too well, can cast an alienating pall over nearly a whole table. In the world of postwar urban planning this noxiously self-absorbed pairing was played, more often than not, by the conjoined duo of the highway engineer and the forward-thinking corporation. Whether their plans involved mass destruction or not, they would invariably leave the urban fabric poorer than when they found it. The only available dream remaining for residents, as for bored diners, was to get in the car and flee. Examples of the harm done to cities are legion:  garages next to off-ramps, flyovers, skywalks, elevated plazas, and 30-story heights. Yet sometimes this approach produced somewhat brighter results. This is the story told in Elihu Rubin’s intriguing Insuring the City: The Prudential Center and the Postwar Urban Landscape, published this spring.

The location is Boston.  The time is the mid-1950s. The protagonist is Prudential, one of the largest private corporations in the world. Older American cities had been filling for some time with ornate insurance headquarters, symbols of power and stability. Think Metropolitan Life on Madison Square in New York, Aetna in Hartford, the New England and Liberty Mutual Buildings in Boston, and the original Prudential buildings in Newark.  A second wave was yet to come.

Prudential, pursuing a course of corporate decentralization in the 1950s, settled on Boston as the location for its New England Regional headquarters, with plans for a signature tower.  This was a bolder move than you’d expect, as Rubin’s engrossing account of the political and business climate in mid-20th-century Boston illustrates. At the time the tallest building in New England was in Hartford.  And the tallest in New England was the Customs House, perfectly symbolizing the consanguinary impact of a tentative business elite and a property-tax mad 40-year populist kleptocrat-mayoralty of James Curley.  Given this account, the rise of suburban business parks is not a great surprise. 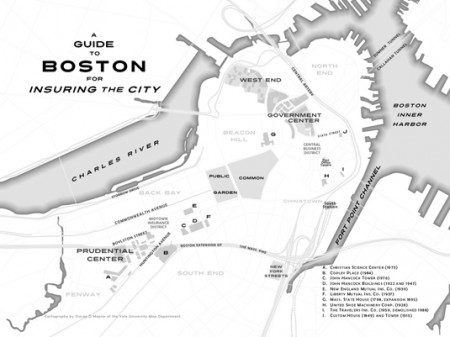 When Curley’s corrupt reign came to a close in 1951 it brought a measure of honesty in the new mayoralty of John B. Hynes, and yielded the declaration that the Boston and Albany railroad intended to sell its Back Bay rail yard. These 28 acres occupied a vital role in the city’s history, as Rubin notes,  “At first, the Shawmut Peninsula – the site of the first European settlement –was only tenuously connected to the mainland by a narrow neck, navigated by what would come to be called Washington Street, which served as the organizing spine of the colonial village. The situation changed little until the 1830s, when two railroad viaducts traversed the Back Bay and the ‘neck’ was thickened and filled to support these transport connections to the west.” This project pioneered the infill that would lead to the creation of the adjacent Back Bay neighborhood, and surround what was once a water-bound viaduct with urban neighborhoods.

The site provided an opportunity to develop a new “midtown” business district on clean lines, away from the perceived age and congestion of the traditional downtown, yet still connected easily and simply to the city’s streetcar and subway network. Here was the fresh start regarded as essential to urban futures across the U.S., and unlike other contemporary development projects in Boston – the West End, the New York Streets, the Scollay Square government center – it didn’t require mass demolition. The city of Boston was determined to develop the site en masse. 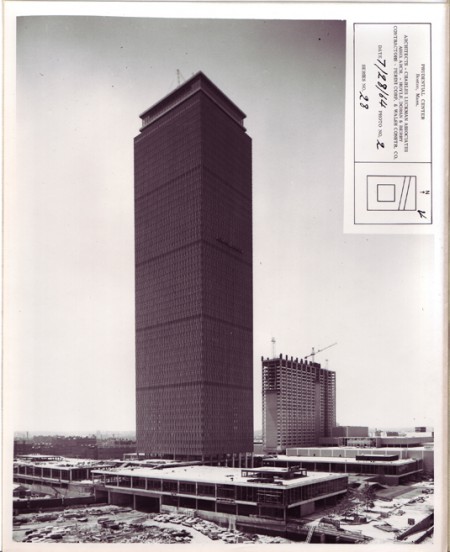 Prudential was seeking the canvas for a large project. Circumstances looked accommodating, save for two things. First, Prudential balked at the property tax environment in Boston. Though the capricious tax variations of the Curley years seemed to have ended, the tax environment was still viewed as broadly forbidding. Second, another powerhouse had its designs on the rail yards – the Massachusetts Turnpike Authority saw the site as vital to its plans to connect the Turnpike from the Route 128 to downtown Boston.

William Callahan–a sort of Hibernian Robert Moses–chairman of the Massachusetts Turnpike Authority and inspiration behind the Route 128 circumferential highway, was determined to run the Turnpike extension along the Boston and Albany Rail corridor, and squarely through the rail yard site. Prudential indicated that if the Pike was to run through the site as originally conceived, as an elevated highway with interchange, that it would abandon its purchase agreement. The city government rapidly scrambled to produce harmony.

Agreement was not particularly difficult to achieve. An easement was provided for a tunneled highway segment, and all agreed to locate an interchange adjacent to the property. Significantly, each party saw much to gain from the other. Prudential perceived an ultra-modern means of easy access to their new building; the Turnpike welcomed the convenient association of their project with a considerable job infusion – all the better to quash objections about land-takings along the rest of the route. Yet most importantly, and this should come as no surprise, the two entities found their financial fates rapidly intertwined, in a sequence of wrangling that Rubin narrates in fascinating detail.

Amid early negotiations surrounding the site, Prudential advanced a series of proposals that they pay only an income-based tax in lieu of property taxes, most of which were, unsurprisingly, of dubious constitutionality.  This triggered an almost farcical sequence of government efforts to grant Prudential’s wishes. First, Callahan suggested that the Turnpike Authority simply seize the rail yard through eminent domain and lease the property to Prudential. Then-governor Furcolo proposed an even more ambitious feat of financial legerdemain, in a 1960 “Emergency Act” which would have exempted Prudential from taxes on the thin grounds that its projected garage was essential to the smooth functioning of the Turnpike. Not surprisingly, the Massachusetts Supreme Judicial Court issued an advisory opinion that this was likely unconstitutional. 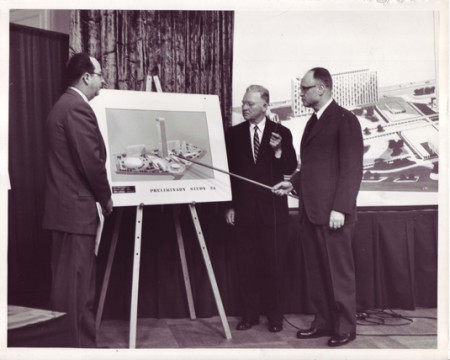 Tax evasion, like bicycling, is a talent never forgotten.  And so Prudential continued to seek some express route around conventional property taxes. A possible loophole was soon found. In 1945 Massachusetts had passed a slum clearance and redevelopment bill, providing tax exemptions to “primarily residential” projects. The Massachusetts Attorney General sought to bend this statute to current use. As Rubin notes: “This required two feats of creative legal rhetoric: extending the definition of ‘blight’ to cover the Boston and Albany rail yard site, and expanding the spectrum of allowable redevelopment projects to include commercial or other uses outside of the ‘primarily residential’ clause.”

The resulting redevelopment law, to avoid giving away the full portrait of its tangles, redefined, among other items, the definition of “decadent” areas to partially include “irregular lot sizes or obsolete street patterns.”  Any resemblance between the final bill and Prudential’s initial proposal was surely coincidental. The Supreme Court assented to this modification, locating the public interest in the elimination of blight and not in the nature of its replacement.

The project was launched. Prudential set aside an earlier site proposal generated by a number of Boston-based architects, including Walter Gropius, and turned to Charles Luckman Associates, avatars of the midcentury mediocre, who also designed Madison Square Garden, the 1962 U.S. World’s Fair Pavillion, and Broadway Plaza in Los Angeles.

The resulting design was not, to put it mildly, well received. Ada Louise Huxtable dubbed it “textbook urban character assassination” in the New York Times. Regard for the tower does not seem to have grown since. In the ensuing years, the project accommodated a variety of uses, from a hotel to a convention center to shopping center. It emerged a relative success, with some predictable glaring missteps of retail planning. The plot did not prize the pedestrian, scattering retail around four awkward plazas bisected by pools, and turned its back on its surroundings, prioritizing a ring road to provide rapid access from the Turnpike.

And yet, as modifications over time have demonstrated, the Prudential Center has demonstrated an unusual degree of flexibility.  “The Pru was not by anyone’s lights an unqualified triumph,” Rubin notes. “As time went on, they were eventually addressed by an extensive reexamination and refurbishment of the project; indeed, these revisions have continued into the 21st century. One indicator of the Pru’s success over the long run, however, has been its demonstrated malleability. Designed as an enclave, with its ring road holding back the surrounding city and its podium resting on three layers of parking garages, recent alterations and additions have transformed the Prudential Center from an urban island into what is intended to be a piece of connective urban tissue.”

A crucial difference between the Prudential Center and similar projects was that its tears in the urban fabric were exceeded by its connective qualities. The early determination to bury the Turnpike and rail tracks provided for a physical connection between the Back Bay and the South End that had never existed before – a step of prudent urbanism that preceded the Big Dig by decades. The site, perhaps in a triumph of Boston’s traditional urbanism and stable neighborhoods nearby, did not radiate the suburban but succumbed over time to the pedestrian, with its own alterations and nearby construction growing steadily more walkable.

Is all this a justification for transparent manipulations of the tax code and state statute?  Probably not, but nothing will spare cities the challenges of difficult sites that must accommodate varied uses.  And so Boston deserves more sympathy than most other cities in this realm for devising a reasonably elegant balancing of competing urban uses. This is a story of 1950 highway mania and of sweetheart corporate preferment, but it’s emerged with a fairly happy ending. How often has that ever happened?

Anthony Paletta is a writer living in Brooklyn. He has written for The Wall Street Journal, Bookforum, City Journal, and The Millions on urban policy, cinema, historic preservation, and literature, and Metropolis on fallout shelter design and Socialist automobility.