Michael Kors and his team arrange stencil lettering on their banner. “I need an O!” Kors said to a friend. “It’s like having a personal Vanna White.” More from Metropolis Last night, a lively crowd of architects and designers descended on the Louis D. Brandeis High School in New York City for the the 8th […]

Michael Kors and his team arrange stencil lettering on their banner. “I need an O!” Kors said to a friend. “It’s like having a personal Vanna White.”

Last night, a lively crowd of architects and designers descended on the Louis D. Brandeis High School in New York City for the the 8th annual Stir, Splatter + Roll benefit. Hosted by Publicolor, a non-profit that uses color and design to inspire at-risk youth in their pursuit of education, the evening included painting, cocktails, dinner, dancing, and an award ceremony honoring Christo and Jeanne-Claude and NYC Councilman and Education Chair Robert Jackson.

It was evident that each team had its own unique approach to painting their banners, which had to be completed during the hour and a half cocktail portion of the evening. The Ecko table splattered and splashed the canvas with Pollack-like vigor before overlaying a graffiti-inspired graphic: 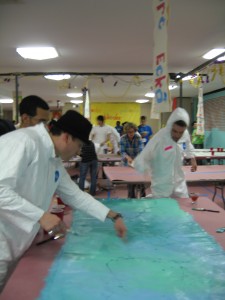 Marc Ecko (in the hat) demonstrates his splattering technique. 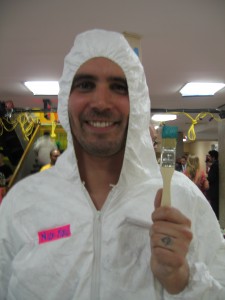 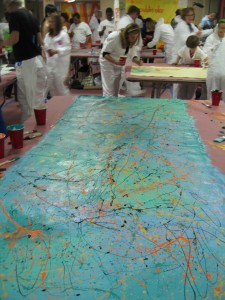 Doug Wilson and Paige Davis of the popular show Trading Spaces employed stencils and sponges for their first-ever Publicolor event: 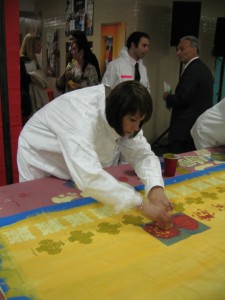 Paige Davis sponges on the stencil. 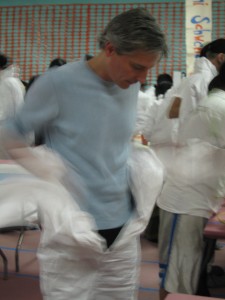 Doug Wilson steps into his overalls.

Michele Oka Doner took her lead from Lella Vignelli. “She saw something from the plane window as she returned from Milan,” Doner said. “She had a vision of the horizon and that’s what you’ve got here.” There was a brief flurry of discussion around paint color. “She wants gray, which is decidedly not a ‘publicolor’ color,” Donor laughed, referring to the vibrant hues available for use. “I am a minimalist,” Vignelli responded. 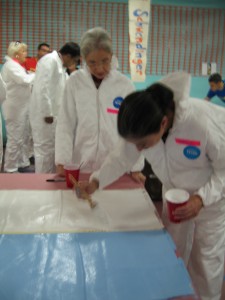 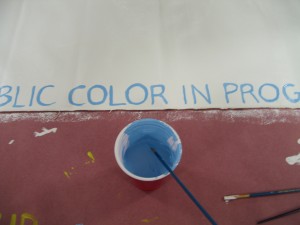 Some teams had a loose approach, letting students and volunteers play on the canvas. Architect Wendy Evans Joseph told kids to paint a fictional city and decorate individual houses to their liking: 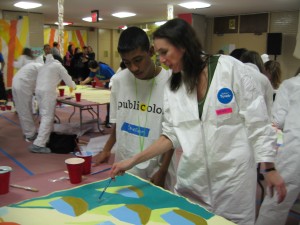 Joseph chats with a student about their collaborative painting.

Other teams took a more formalized approach. In true Martha Stewart fashion, Gael Towey, founding art director of Martha Stewart Living, and Julie Sanderson, design director for Martha Stewart Everyday, mapped out their banner in advance and employed an organized color-by-number approach. “We’ve done this event since the beginning and we’ve learned over the years that you need a plan,” Towey said. “The first year we didn’t finish.” 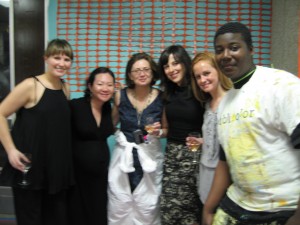 The Gael Towey Team: Towey is in the center in the overalls, with Julie Sanders to her right. 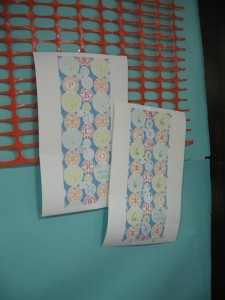 The team used this road map to help direct the painting. 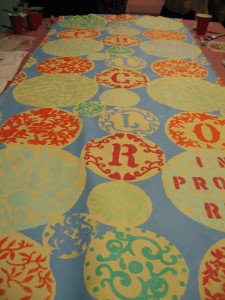 Architect Tom Krizmanic also used a paint-by-numbers approach for his team. He has been contributing to the event for four years running. “This is a not-for-profit that uses design and color to engage kids, so as an architect, I really appreciate that,” he said. 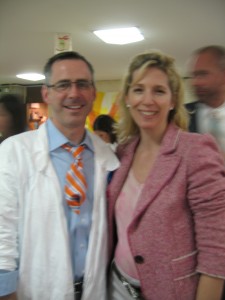 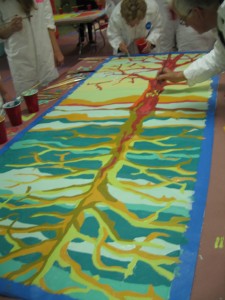 “Since today is Earth Day, I had this concept of a tree against a sky,” Krizmanic said.

Publicolor founder and president Ruth Lande Shuman interrupted the festivities to honor Christo and Jeanne-Claude for their collaborative spirit and their colorful contributions to New York and the world. “When you talked about our use of color, I thought you were talking about my hair,” Jeanne-Claude quipped. 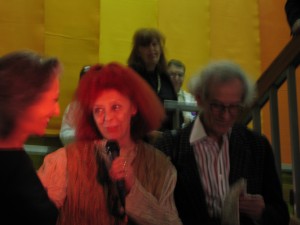 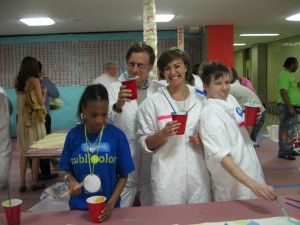 “The kids are awesome!” Charles Renfro shouted over the music. “It’s hard to draw a straight line when you’re dancing, but I’m perfecting my butt wiggle.” 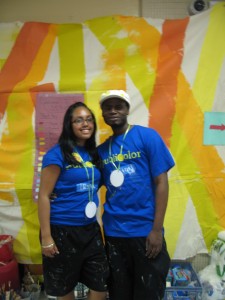 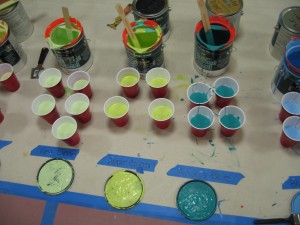 Michael Kors summed up the night this way: “I know the effect that fashion has on me and I believe that if you can bring color and exuberance into people’s lives, it really does change how they feel.”

You can read more about the Publicolor program online at Metropolismag.com.