The architect discusses how his foray into products has redefined his understanding of design.

When you talk to Daniel Libeskind, no single question has a simple answer. From his days as a young musical prodigy (he played the accordion) to his directorship at Cranbrook Academy, not to mention his voracious passion for literature, the fascinating episodes of his life all come together, informing his approach to design and architecture. His career path is an unusual one. And while that is true for many architects, his is particularly interesting, where each twist and turn, no matter how ostensibly disconnected, seem to have always prepared him for his next step. Take his two highest profile jobs, the Jewish Museum in Berlin and the master plan for Ground Zero. The two are intrinsically linked—the museum’s official opening to the public in 2001 was originally scheduled on September 11. The project had taken 13 years of political maneuvering to realize. Similarly, Libeskind’s World Trade Center site master plan was marred by a decade of delays and alterations, which threatened to blot out his original design intentions. One monumental task after the other, eerily similar in challenging circumstances, both offering the architect a rare opportunity to helm projects richly entrenched in emotion, symbolism, and historical significance.

Now as his career moves beyond these two important projects, the architect’s connection to Italy is beginning to play a pivotal role in his work. He moved there after his time at Cranbrook, when he was looking for new career challenges. Libeskind has been back in America since he was commissioned the Ground Zero project, but he recently opened up a studio in Milan, where he, his wife, and son oversee the firm’s forays in product design.

I caught up with Libeskind at his Lower Manhattan office overlooking Ground Zero to talk about Italy and his involvement in upcoming design fairs there, Milan Design Week and the Venice Architecture Biennale.

Paul Clemence: You had a privileged position at Cranbrook in the 80s, as director of the architecture school there. Why, then, the decision move to Italy?

Daniel Libeskind: I had been appointed a Lifetime Artist Residency, a very prestigious position where teaching was just part of the job. It was meant as an opportunity to develop your own work. It was a lifetime in paradise, but was too pleasant a life. I decided it was too early too retire. So we [Libeskind’s wife and family] went on this adventure, spur of a moment, not speaking the language, no job, and no connections in Italy other than Aldo Rossi, who was a close friend.

PC: Milan is certainly rich in culture and history, but in ways that aren’t immediately evident. How was it like getting to know the city?

DL: Milan is a secret city. You have to have a key, you can’t just find it in guide books. But if you have a key in, you can find treasures of Renaissance, of Baroque, of Modernism. I love Milan, it’s a fantastic city. 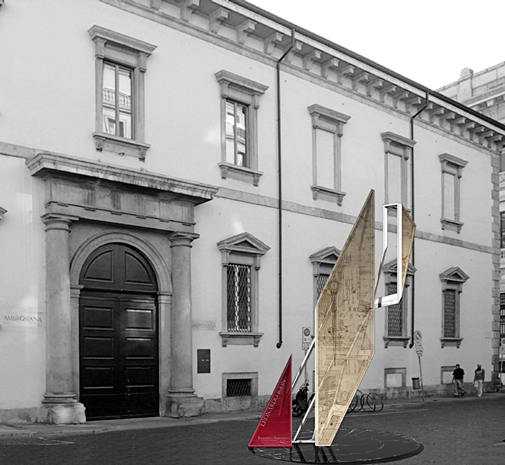 In 2012, Libeskind designed a scultpure dedicated to Leonardo da Vinci at the entrance of the Biblioteca Ambrosiana Art Gallery, known locally as the Pinacoteca Ambrosiana. The gallery holds thousands of drawings, including the largest collection of da Vinci sketches.

PC: What is one of your favorite places to visit there, one that you can always  go back to?

DL: I would have to say the Biblioteca Ambrosiana (Ambrosiana Library) is the greatest secret of Milan. It’s a true gem tucked away in the center of the city. The library houses the largest collection of Leonardo da Vinci’s in the world, including the Codex Atlanticus. You can intimately view other master works by Titian, Caravaggio, and Botticelli, just to name a few. The library recently unearthed the ancient ruins of the Roman city in their sub-basement—it’s fascinating! It will open to the public next year.

PC: How has your time in Milan and Italy affected your work?

DL: Italy is connected to the whole humanistic culture, from Alberti to Vitruvius. Italy is really a school, for any artist. Being there is an education. I used to torture the kids, taking them to see these obscure churches in small Italian towns, and the small piazzas that are at the basis of history of architecture. Like Vigevano, which is reputed to have had the first public space ever created, the first time people thought to create a place to just sit around. 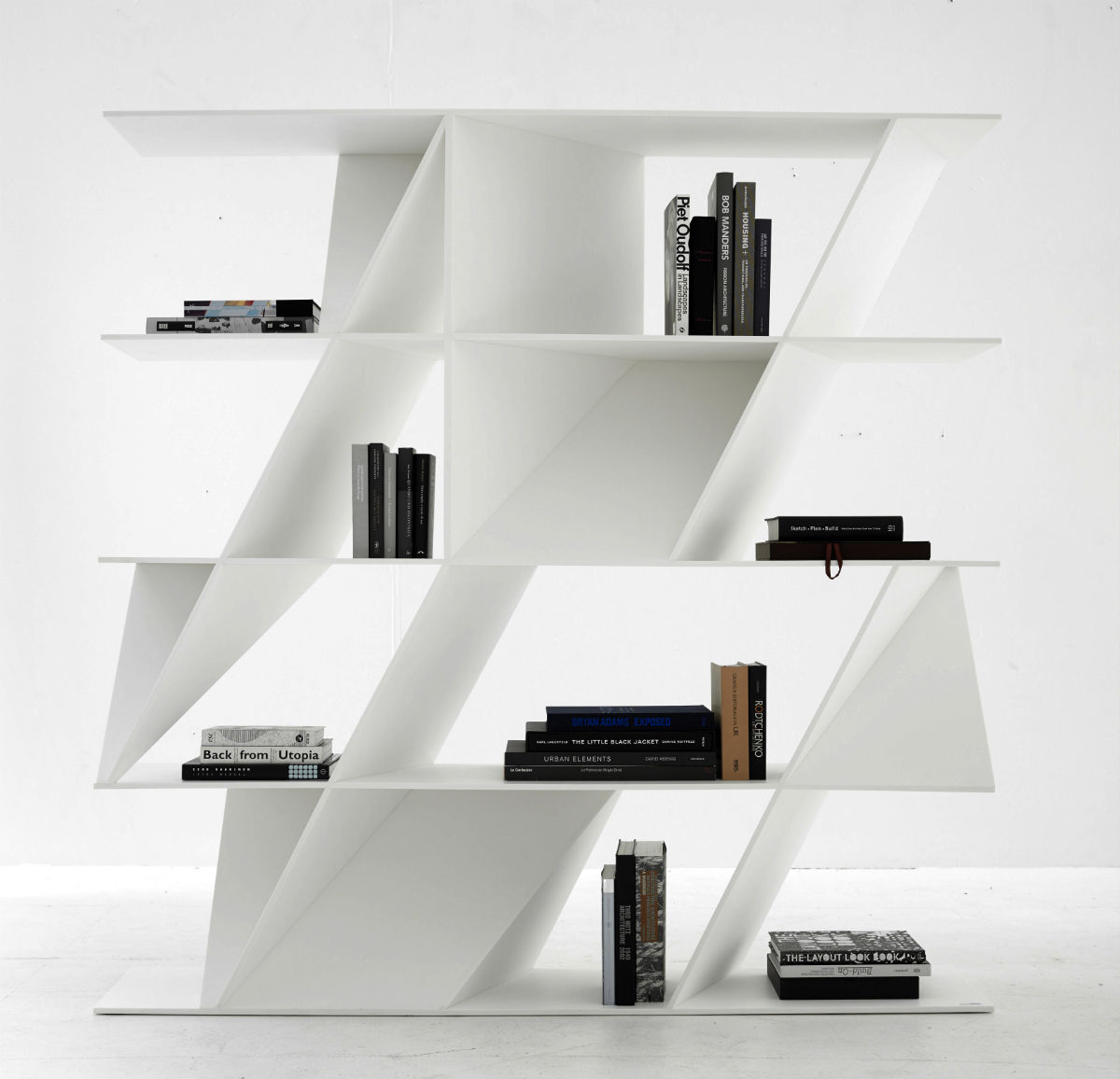 A bookshelf designed by Daniel Libeksind for Poliform. In recent years, the architect has veered towards product design. The Milan branch of his studio is headed up by his son Lev, who looks over the development of Libeskind’s product designs.

All product images courtesy Studio Daniel Libeskind and the manufacturers

PC: Now you’ve opened a satellite office there in Milan, which will be developing your industrial and product designs. Your son Lev is the CEO there, joining you and your wife Nina in the company. How is it to work with the whole family?

DL: It is the best. And another Italian tradition—so many of the companies we are working with, whether is Cassina, Artemide or Guzzini, all are family companies. And that’s what makes them so good. It’s not mass production, there’s a  degree of pride involved. I love the idea of the family working together. It was my wife that suggested Lev come and help us in Milan, and he left his own career to join us.

PC: What was the first object you were ever asked to design? And how did you feel about doing that, having been so deeply involved in architectural thinking?

DL: This is the honest truth. People used to say, “Why don’t you design products also,” and I would say, “I am designing buildings, big projects.” Then one day a company asked me to design a door handle, and I started laughing because it is the smallest object. But I kept thinking about it and suddenly I had a revelation—why not? I mean, it is something that is part of everyday life. So I said, “Sure I’ll design the door handle.” And I did, and I thought that was it. Then months later I was asked to design a door. And I had this other revelation—first I had the door handle, then a door, then you have to open the door. Then suddenly I realized what an incredible thing I had come across, something that I had never thought about. And that’s how I began designing all type of objects. Large or small, all the things that have to do with design are things we have to use everyday. From there grows the whole idea of the environment. I was lucky to come across these opportunities. And like Frank Lloyd Wright said, “To design a chair it is as difficult as to design a city.” 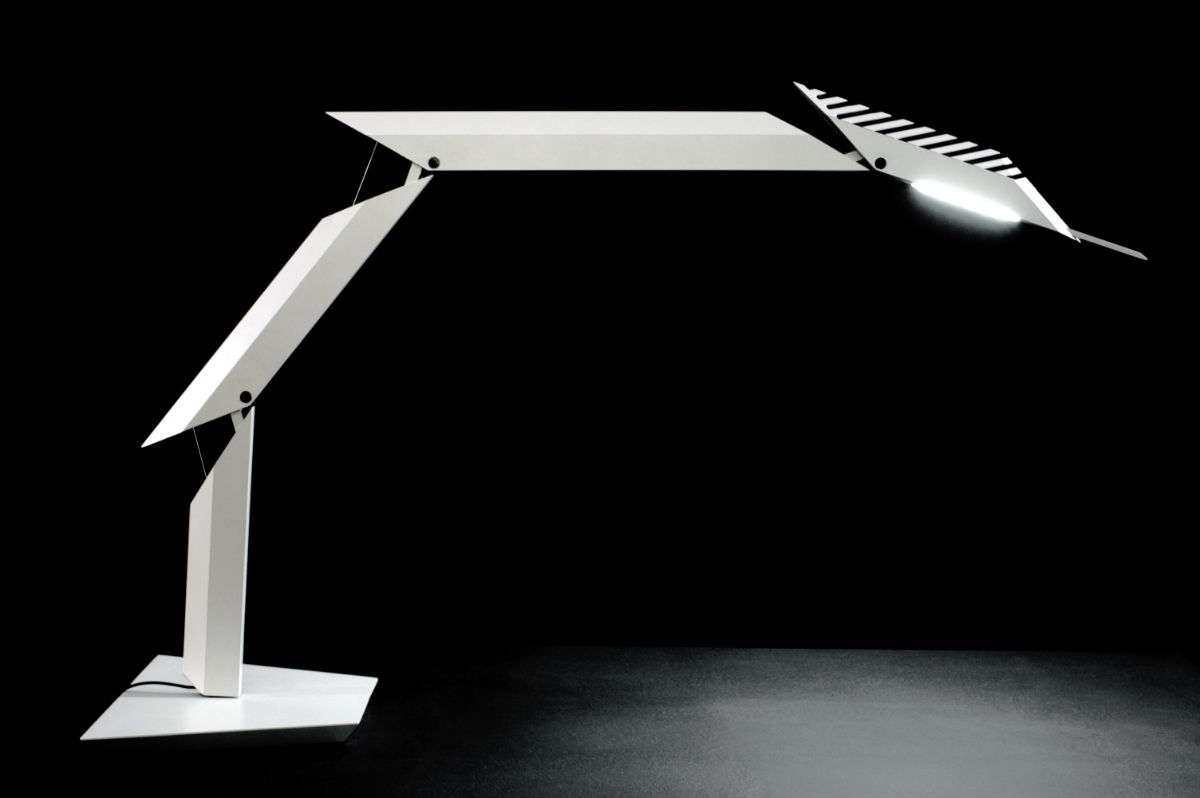 Libeskind’s Paragon lamp design for Artemide. He will be showing a second iteration of the design at this year’s Salone del Mobile.

PC: On that note, you’re launching several new products at Salone that will cover a wide range of designs, from a chandelier to a bookshelf. Tell me about the new lamp for Artemide? It resembles a building model of a skyscraper.

DL: Yes, that is the Paragon 2. The premise was how to make a very effective light with a very minimal gesture, but very expressive. It’s about the light, the expression. But also is very affordable. I learned this very quickly—it’s pretty easy to design something extravagant, but the true challenge is to do it at reasonable cost. 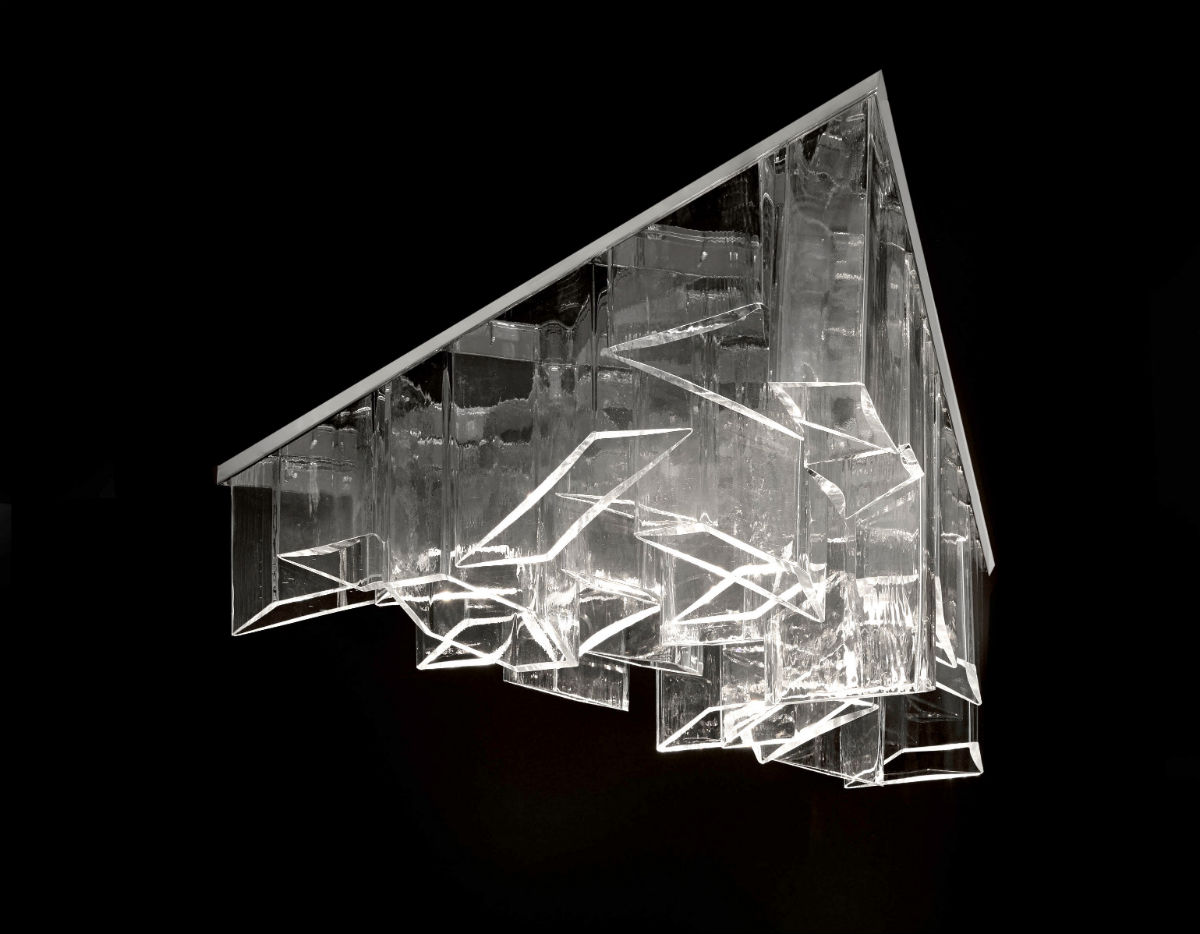 The ICE chandelier by Lasvit

DL: The chandelier is by Lasvit, a manufacturer from the Czech Republic and is really very interesting. So many chandeliers are really just clusters of light, but how do you really amplify the light and make it something really beautiful? That was the challenge.

PC: What about your titanium ceramic tile designs for Casalgrande Padana? The collection was launched at the Cersaie Ceramic fair last year, and I understand it has an interesting technical and environmental feature.

DL: The tile breathes—it has titanium in it, which reacts with sunlight, releasing oxygen into the atmosphere. It’s also self-cleaning due to the way its surface molecules interact with rain and humidity. We are using it on the upcoming CHAU residential building in Berlin and the Vanke Pavilion at the Milan Expo 2015. 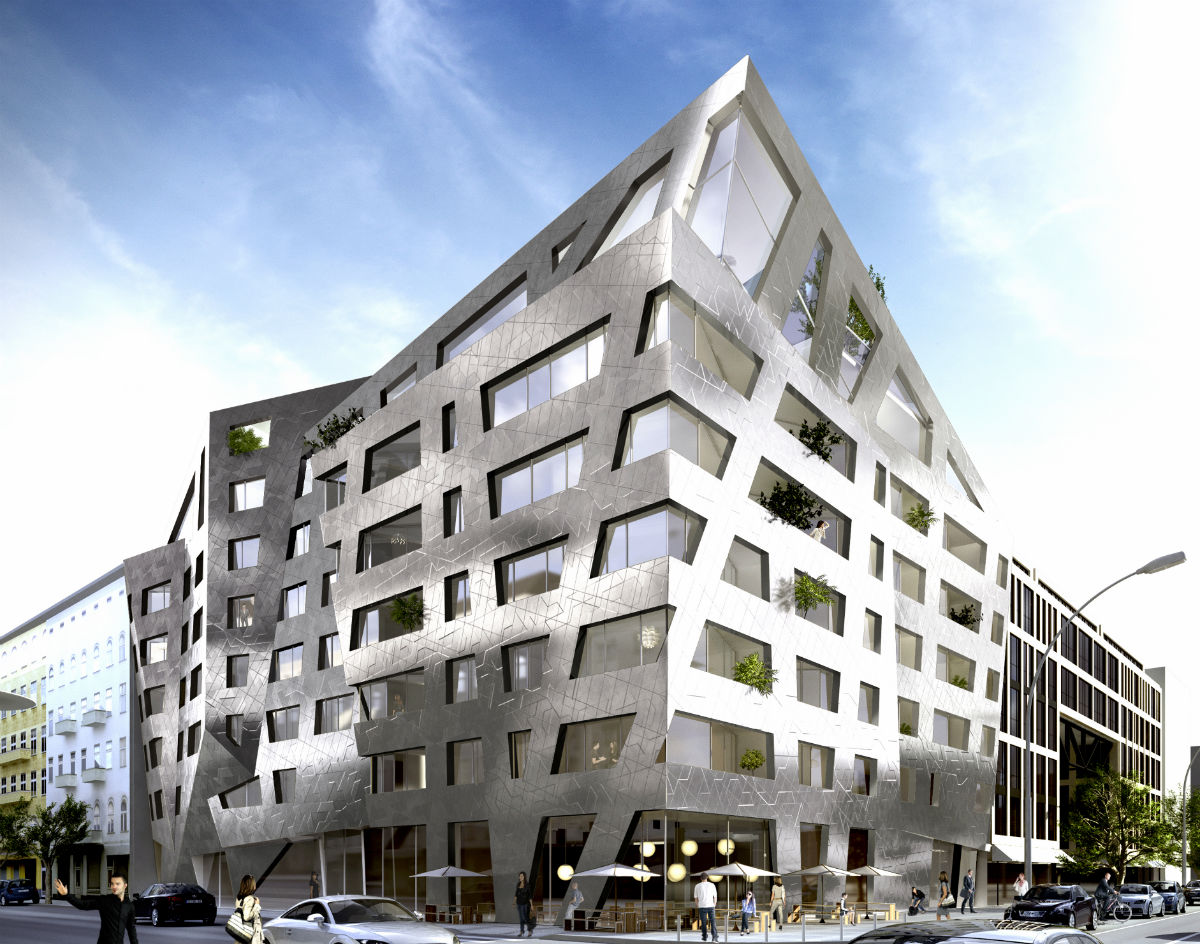 Rendering of the CHAU 43 residential project in Berlin, whose facade will be clad in Libeskind’s titanium ceramic porcelain tile.

PC: From Milan’s Salone to Venice Biennale—you have been invited to design the Venitian pavilion for the upcoming Architecture Biennale. Can you talk about that commission?

DL: This was truly an honor, a wonderful opportunity. The original pavilion is a Mussollini-era building from the 30’s I believe, a neo-classical pavilion, and we are designing the installation inside. Our project is a continuation, 30 years later, of the three “machines” known collectivelyThree Lessons in Architecture that I presented at the Venice Architecture Biennale in 1985. This one will be “Sonnets in Babylon—the Fourth Lesson in Architecture.”

PC: And what will the installation consist of?

DL: It will be a series of one hundred hand-drawings, silk-screen printed on glass. They will be displayed in an architectural composition divided into chapters along the concave wall of the pavilion. The drawings depict a space in frozen flux, a metamorphic city of the future. 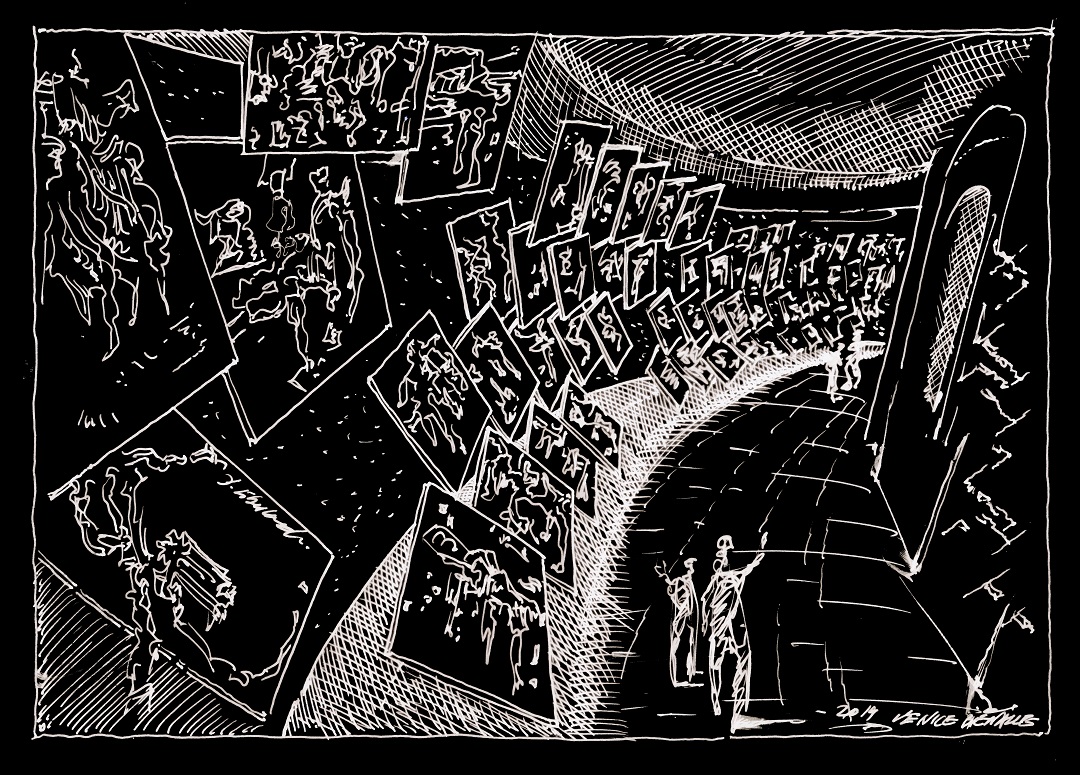 Libeskind’s sketch for ‘Sonnets in Babylon, the Fourth Lesson in Architecture,’ his installation at the Venice Pavilion for the 2014 Architecture Biennale.

PC: How would you describe the concept? How does it fit in the “Fundamentals” theme of this year’s biennial?

DL: It’s a meditation on the origins and future of form in architecture. It relates to the tensions between architecture and drawing, materiality and poetry, the city and the imagination; form, space, light, and technology. It explores the fundamental relationship between architectural thought and drawing, and raises the question whether form is disappearing into techne, or if it is a product of the permanent expression of the human being.

PC: On that note, in what ways do you see technology changing architecture? Are these positive developments?

I think architecture has changed in a positive way. I always say we are living a renaissance in architecture, a re-birth, a rediscovery. For many years architecture was considered a means to an end, something technical. But people are discovering all the other aspects of architecture, whether it’s sustainability, the cities of the future, or of energy and urbanism. It has become more open, now everyone gets involved in the discussion. There’s a wider range, and I like that diversity.

Paul Clemence is an artist, architect, author, and award-winning photographer inspired by the cross sections of design, art and architecture. His work is part of many collections, including the Vasari Project /Miami , Escola de Belas Artes/Sao Paulo, and The Mies van der Rohe Archives housed by MoMA, New York.  His “Mies van der Rohe’s Farnsworth House book,” is to date, the most comprehensive photographic documentation of that iconic modern house. Besides curating Facebook’s photography page “ARCHI-PHOTO”, with over 400k daily followers, his photography appears regularly  in major publications like  Departures, ArchDaily, World of Architecture News, Metropolis,  Aishti, and  Casa Vogue / Brazil. American born, but raised and educated in Rio de Janeiro, Brazil, Clemence currently is based in Brooklyn, New York.