For James Polshek, “Every Building Has Consequences”

The architect talks about his new book, his decades-long career and practice, and what’s next.

Although it contains aspects of both, James Stewart Polshek’s new book, Build, Memory (The Monacelli Press) is neither monograph nor memoir. It is instead a kind of quiet, hands-on polemic on the meaning and making of architecture. Polshek looks at 16 of his seminal projects—including among others, the Rose Center for Earth and Space, American Museum of Natural History and the William J. Clinton Presidential Center—tracing their journeys from inception to completion. I recently spoke with the 84-year old architect about the birth of the book, its unique approach, and his latest project, a memorial competition in India.

Martin C. Pedersen: How did the book evolve? What’s the origin story?

James Stewart Polshek: I left the firm in 2005, and did so for a variety of reasons. Some were personal; others involved the size of the office. The firm had grown very large. You reach a point where you can’t control size. Younger architects are always saying, “Oh wow! I just want to reach thirty people and that’s it.” Actually, you can’t do that. It keeps growing. It’s the nature of the free enterprise system. We’d reached about 180, with seven or eight partners, and decision-making was becoming diffused. The work was getting larger because it had to, to sustain that many people. I was not particularly interested, in fact not at all interested, in doing developer work or even working overseas. I was 75-years old and thought it was a good time to pull back.

At that point, for a year or two, I continued working on projects that were under construction. There’s still one—the Vietnam Veterans Memorial Visitors Center—waiting to break ground. But I wanted time to take on other public responsibilities and serve a purpose larger than that of an ever-expanding universe. This enabled me to accept an appointment with the Art Commission of the City of New York, now called the Public Design Commission. I also began working on Four Freedoms Park, Kahn’s memorial to Roosevelt on Roosevelt Island. That was important because of my history with Louis Kahn. At the same time, I began thinking that we had done some interesting commissions, and that taken together they defined an attitude toward the practice of architecture, which is not a mainstream one, and I thought, maybe its time to write a book. So almost four years ago, I selected sixteen buildings that I thought represented the length and breadth of the practice, starting in 1961. 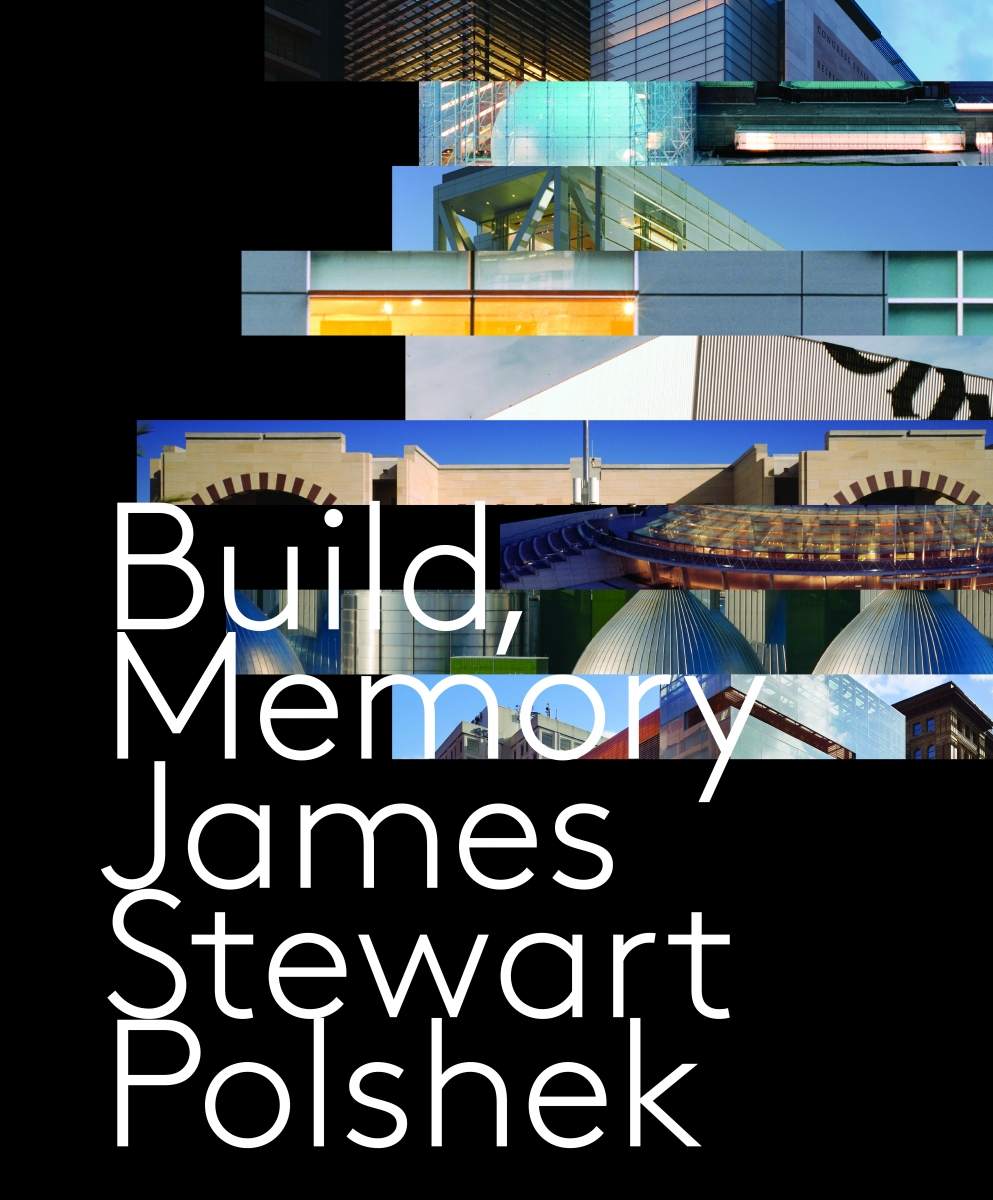 MCP: Why those 16 projects?

JSP: With just a few exceptions, the buildings all served public purposes. In the preface I make reference to healing. That’s always been a kind of driving rationale for my entering the profession, and it is one that becomes translatable almost in a literal form in grafting new buildings to older ones. Or completely new buildings in a delicate environmental circumstance. For me, politics and the social construct have always been indivisible from the practice of architecture, and that’s part and parcel of the reasons for the selections. 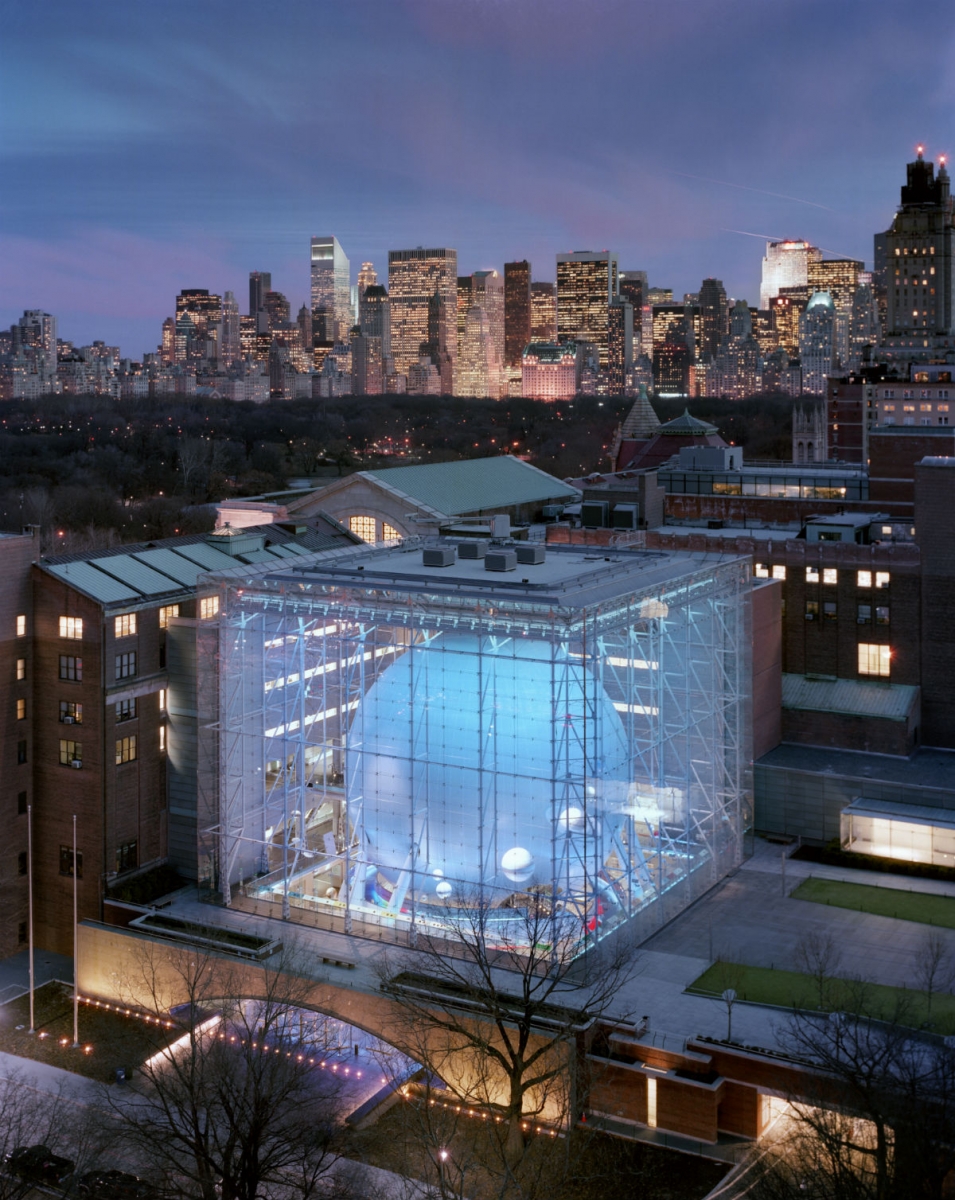 MCP: The book uses an interesting approach. For each project, you start with the historical and cultural context, then bring in the clients, the program, the design challenges. So the book is a real hybrid: part memoir, part monograph, part case study. Talk about how you landed on that approach.

JSP: Well, that’s the way I practice architecture, so the approach was simply a mirror of that. You’ll notice that in these anecdotal presentations, even going all the way back to Japan, there is emphasis on the beginnings and the endings, more than the middle. The technological issues I barely touch on, because that has never been a strength or interest of mine, and it would have made this book not 500, but 1500 pages.

MCP: And would have made for some pretty dense reading.

JSP: Very. I wrote this for an audience beyond the architecture and design audience I know it will have. I have many friends in different professions, who are interested in the field, but have been so misled by well-intentioned architectural historians who overly romanticize the making of buildings, so they’re confused. I’m also interested in reaching people in foundations and businesses, who are faced with the prospect of selecting an architect, as well as young people considering a future profession. By the way, the graphic design of the book, which Paula Scher was responsible for, uses large images with almost scrapbook-like pictures appended to them to reinforce the diversity of projects and approaches. 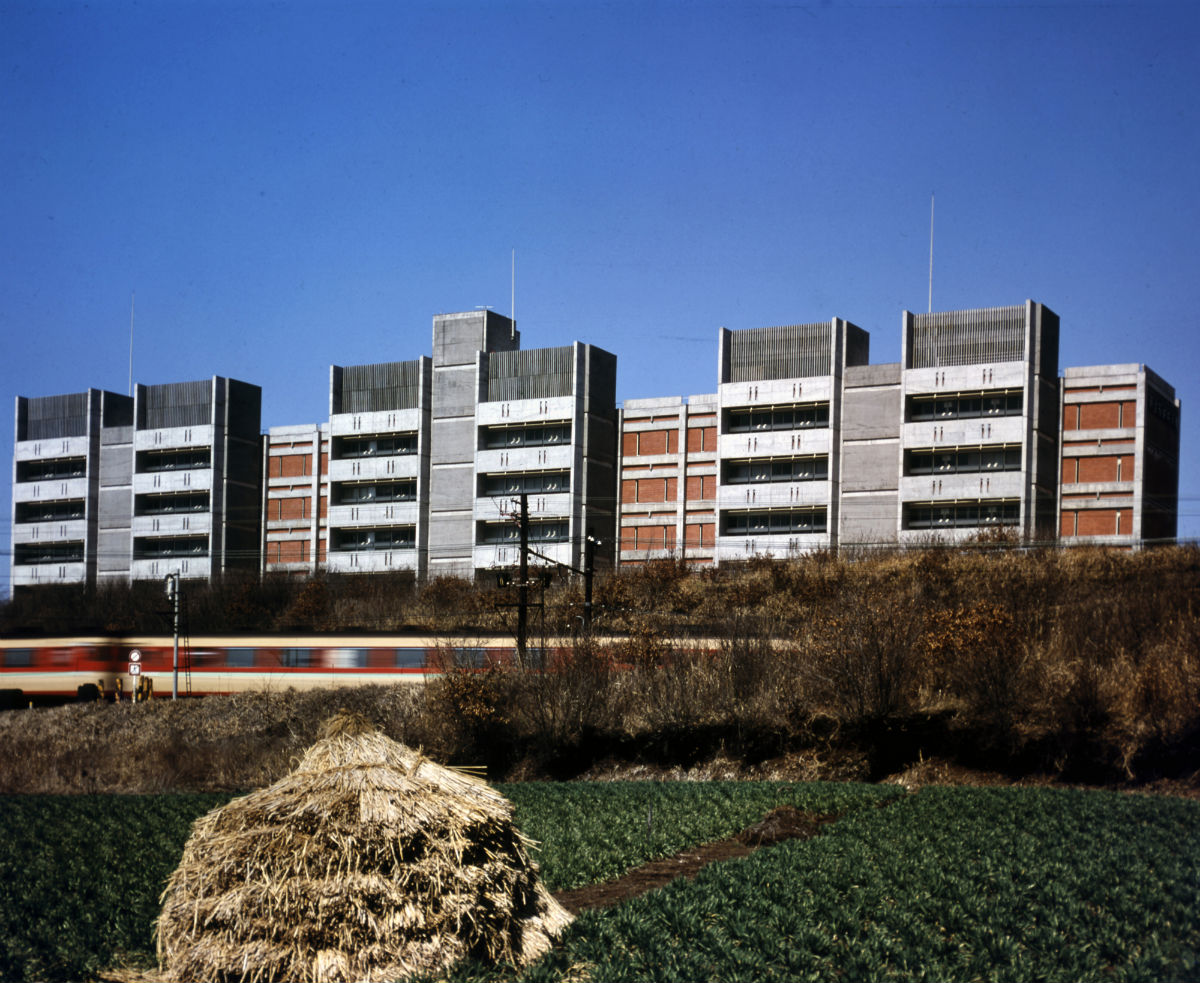 Over his long career, Polshek resisted any overriding styles, as his design for the Teijin Institute for Biomedical Research or the US Embassy in Oman (below) show. 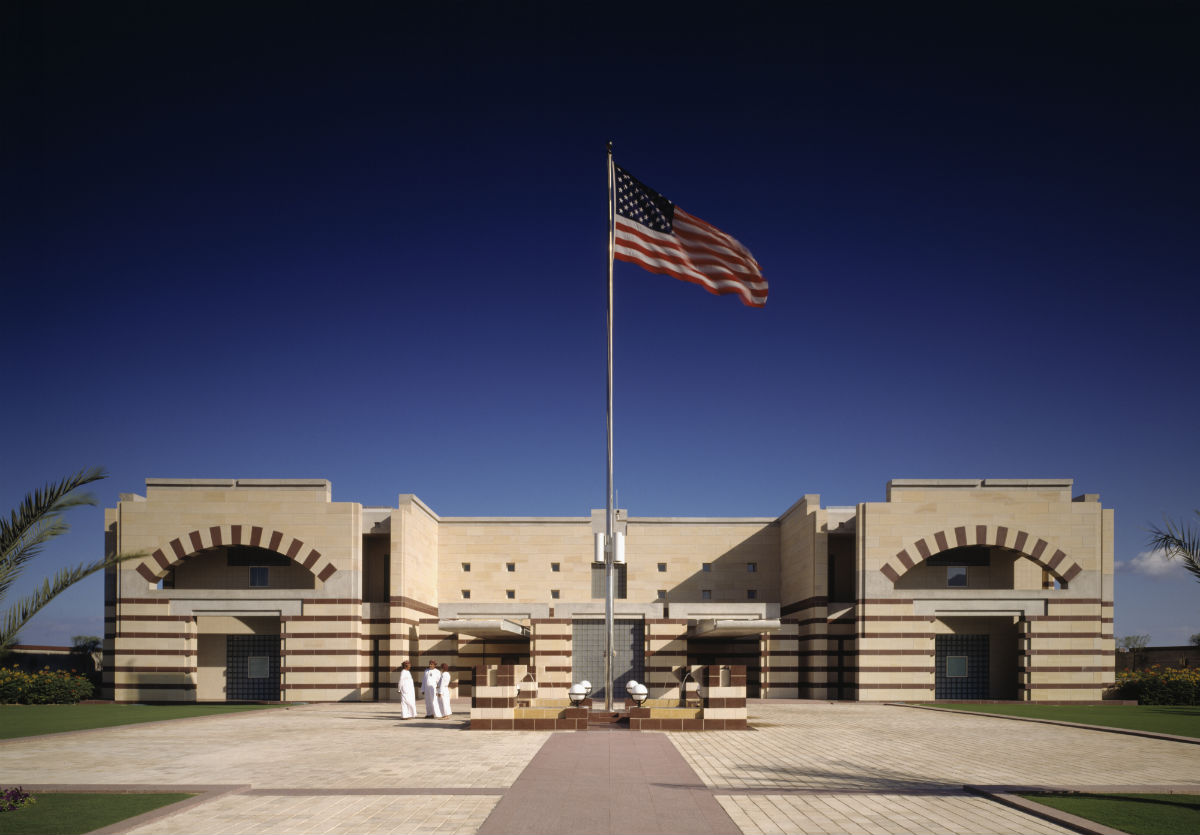 MCP: The book illustrates how you avoided a signature style, which seems to be a big part of architecture today. Was that a philosophical or ethical choice?

JSP: At the risk of appearing holier than thou, I do think that one of the victims of personal creation, no matter how rigorous, is often a certain generosity. Recently there was a piece in the New York Times about the Guggenheim Abu Dabi and a Zaha Hadid building. I believe Holland Cotter wrote it and it was kind of confusing, because he seemed nervous about making his point strongly. But having a complicated program and large budgets, and then choosing to ignore the political and social consequences of the project was something I could never do. I became an architect because I understood even at the age of 19 or 20 years old, that every building had consequences. Every building was inherently a social critique. I’ve had arguments with other architects about the indivisibility of politics and architecture, but that’s something that I grew up with and it has never left me. The book’s introduction describes the genesis of this belief. 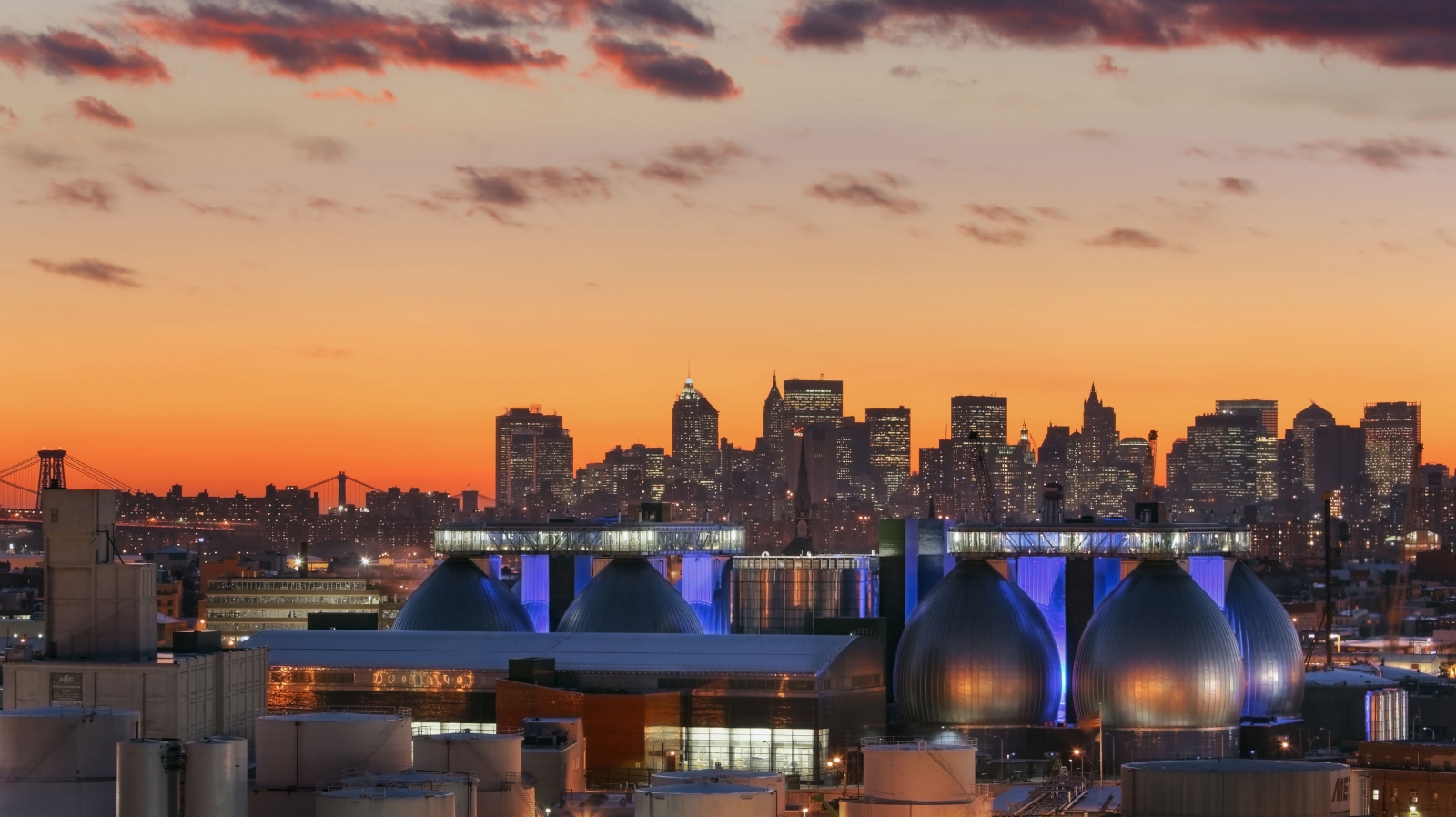 Ennead developed a $4.5 billion masterplan for Newtown Creek in Brooklyn, New York. The egg-like forms of the wastewater treatment plant have become a contemporary landmark in the borough.

MCP: How often do you go into Ennead [the legacy firm formed after Polshek’s departure from Polshek Partnership and the latter’s subsequent restructuring]?

JSP: I go every week. I have an assistant, Andrea Whitfill, who brilliantly worked with me on the book from the beginning. And I had a lot of resources there, the archives, help with all the computer technology, and I have a lot of friends there.

MCP: Do you weigh in on the things that are on the board?

JSP: No. I specifically and judiciously stay away from that. Sometimes I sit in and observe. They have a nice system. Some of the younger people who’ve worked on a project periodically present it to the whole office. They’re called Stim sessions, to stimulate, and they’re very good, but I don’t really speak up. 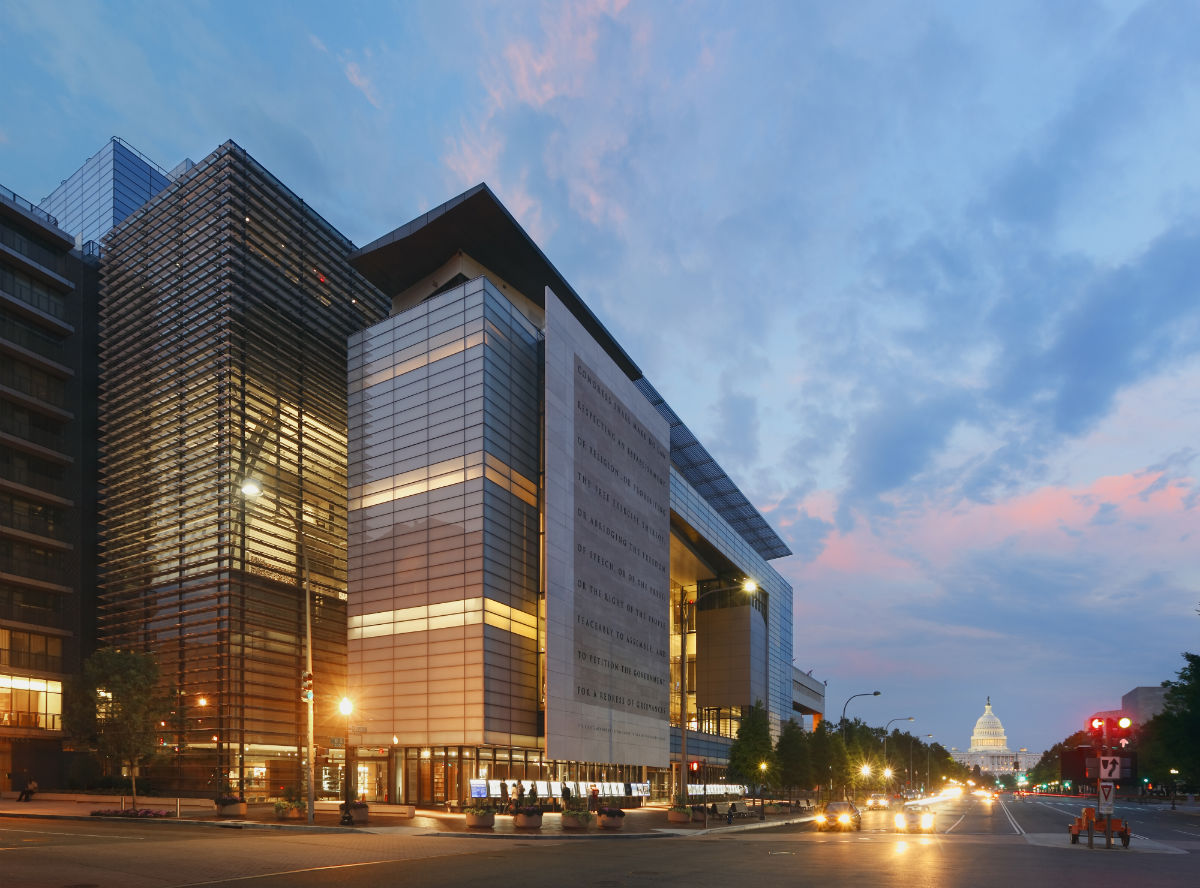 “With just a few exceptions, the buildings all served public purposes,” Polshek says. The Newseum (2008), an interactive museum devoted to news media, is prominently sited in Washington, just a few blocks down from the Capitol building.

MCP: What are you working on now? It’s clear you didn’t retire.

JSP: That’s correct. I’m not retired. I recently did a competition with an Indian firm in Mumbai, for a memorial, because I was so fascinated by the person being memorialized, B.R. Ambedkar, an Indian jurist who was the architect of India’s constitution and embedded the freeing of the untouchables. Ambedkar took a non-spiritual position rather opposed to Gandhi. He was a great national figure. The competition involves 12-acre piece of land right on the Bay of Bengal. This experience took me back to my days in Japan, where I worked totally alone. I sat at my table here and sketched, then made more detailed drawings but always free hand, then pulled out my iPhone, scanned it, wrote a narrative note with it, scanned that and sent it off to India. A drawing would come back less than 24 hours later, very precisely detailed, and I would mark it up in red and send it back again.

MCP: How did that happen?

JSP: A friend told me that a mutual friend of ours, Brinda Somaya, wanted to enter a competition and needed someone who could be a conceptual driver. We were trying to think of people, and I was just about done with the book, so I said, “I’ll do it.” And she was like, “Oh, my god, really?” I said, “Yes. I’m open to opportunities.” We’ll find out soon. We’re one of ten.