Q&A: Laurie Olin on Using Landscape as a Security Measure

What role do landscape architects play in national security?

To understand how landscape architecture can address our society’s rising security concerns, we naturally turned to the eminent architect Laurie Olin in our November issue. His Philadelphia- and Los Angeles-based studio has long engaged with the thorny task of designing the public realm, from New York’s Bryant Park, to the grounds of the Washington Monument. I met with Olin in his sun-drenched office overlooking Independence Hall in the heart of historic Philadelphia. Some of our long conversation about designing for security was published in the article “The Trouble with Washington.” The conversation continues below:

Avinash Rajagopal: How did designers get left out of the conversation on security?

Laurie Olin: Why do designers get left out of so many conversations in our environment? It’s partly because people don’t realize what we can do and how we can help, and partly because people panicked. A few years ago, after 9/11, when the federal government insisted on closing Chestnut street here in Philadelphia—basically paralyzing this end of our city with their notion of defending Independence Hall from some sort of attack—it took us three years to unwrap that, and to get the street open, and to get the barriers down. I personally had to go down to Washington to talk to two senators one day, to get them to reopen one of the main arteries of our city, which passes in front of Independence Hall. Now the truth is that any teenager could figure out how to blow up Independence Hall if they wanted to. You could do it from any of these offices around here; it’d be so easy. Probably no one will. Even if they did, it is a building that, thanks to the American Building Survey, has been documented to death, and it could be rebuilt. If Dresden has been rebuilt after the fire bombing of WWII, surely we could rebuild this hall. It’s been rebuilt two or three times already, those aren’t the real towers anymore. It’s like those old shrines in Japan that are rebuilt every 25 years. They’re 800 years old, but they’re really only 25 years old. Yes, Independence Hall was built in 1759, but its been rebuilt many times since. There’s a lack of perspective on the part of the current administrators. 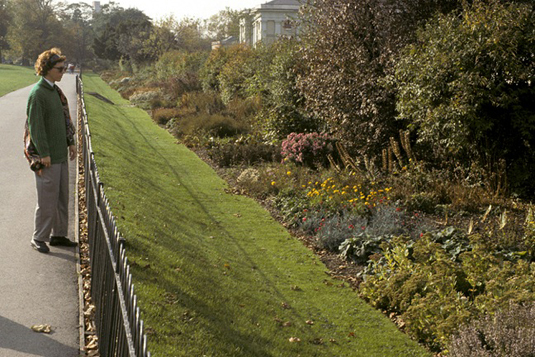 A sunken wall and bank were used as security measures in 17th and 18th-century parks in France and England. Some of these, like this one in Greenwich, near London, have been modified into embellishments.

AR: Surely security is not a new concern for landscape architects, though?

LO: Landscape architects have been working with security devices since the Bronze Age, as long as people have been designing landscapes. You can look at the Iron Age hill forts across Northern Europe and Central Asia, and you will see moats, banks, berms, barriers, hedges, that led to castles, that led to other things. The historians James Ackerman and Henry Russell Hitchcock wrote about the brilliant engineering, design, and artistic solutions to military problems. We’ve actually been designing security things for a long time. And actually, many of them are very handsome, and we consider them a part of our design legacy. But they weren’t for tanks or for people who strap bombs on themselves. So this is a new level of problem. 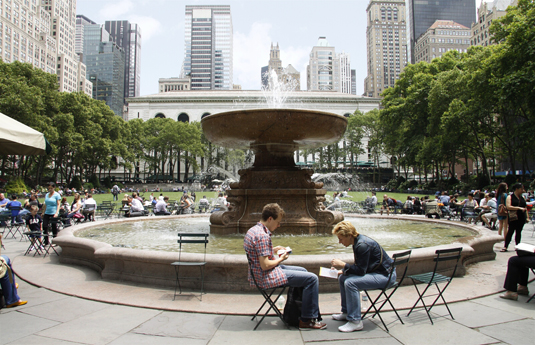 In 1991, Olin transformed New York’s Bryant Park from a haven for criminals into one of the city’s most gracious public spaces by dramatically increasing visibility in all directions.

AR: Among those historical ideas about defense, what still works and what doesn’t?

LO: Our trouble has been—how do you take these things that are negatives, because they are about prevention, and leverage them, turn them into something that will help enhance a civic realm or a public environment, and be an improvement? Well, it turns out that water is a pretty good one. Pools and basins are useful, because it’s harder to drive through them if they have depth. And fountains are useful, because they tend to have stone parapets, and there’s a lot of apparatus, and it’s hard to get past them and around them. Old trees, mature trees are hard to drive through, but it’s hard to get instant old trees with the spacing you want. The embassies were the ones where we really got into what was at stake. Working on the Berlin embassy, looking at the embassy in London, working on a federal reserve bank, and on a couple of courthouses, one of the things we learnt was the different safe distances for explosives. We learnt about the speeds at which vehicles move, and what their impact will be, and what will or won’t stop them. But we also realized that there wasn’t a lot we could do about certain urban conditions. If buildings were close to streets, there wasn’t too much we could do about vehicles. And that’s just the way it is. You have to believe that it’s important to keep a public realm that is accessible, open, and welcoming. If something bad happens, you will rebuild and replace, rather than making it so that you’re trying to defend against everything. Because that is a place no one wants to be. It’s inhumane. 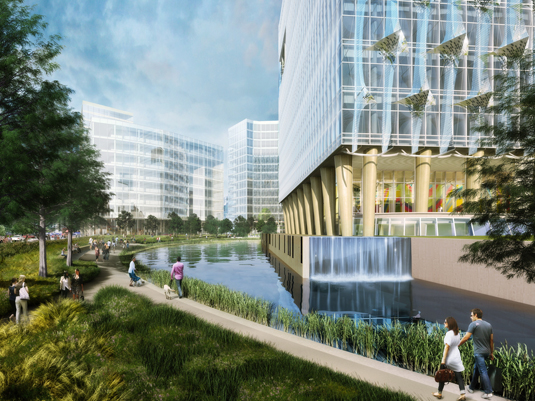 Olin is the landscape architect of the as-yet-unbuilt United States embassy in London, designed by Kieran Timberlake.

AR: It seems like a difficult, contradictory goal—designing security measures that are almost enjoyable.

LO: Conflicts are fundamental to our society, to life. If we had perfect balance, there would be stasis, and life would stop. That is called death. There is a certain imbalance to the universe. You don’t have to be an oriental philosopher to know that. If you take a street, there is a built-in conflict in the street. It is built to allow movement through, to connect one place to another. But it also, by its very nature, produces addresses for you to stop at. So wanting to stop versus wanting to move is built into every street in the world. That conflict bedevils us, forever. The security problems of today are, in a funny way, tied to those old conflicts about access versus defensiveness. The new embassy in London has a kit-of-parts of all these fundamental ideas. There’s a plaza with a nice wall, a bench against the wall, a meadow beyond, a public garden and a pond. The pond has got ducks and water plants, but it’s a device to keep people away. And the wall, on which we’re hoping to get a nice piece of art, is a non-climbable wall. This big mural on a wall, reflected in a pond, is a protective device, but it’s also handsome as hell. Or should be. You can look at it as a security device, or you can sit around the park, look at the art, feed the ducks, and not think about it.