When we published a Metropolis issue on Access in 1992, we were optimistic about the positive changes the Americans with Disabilities Act would bring to the designed environment. Signed into law by president Bush the elder two years earlier, the ADA was a hopeful expansion of civil rights, promising to include citizens with disabilities, in all […]

When we published a Metropolis issue on Access in 1992, we were optimistic about the positive changes the Americans with Disabilities Act would bring to the designed environment. Signed into law by president Bush the elder two years earlier, the ADA was a hopeful expansion of civil rights, promising to include citizens with disabilities, in all that America offers. Considerate design was to be at the heart of this momentous social change. Well, it didn’t quite turn out to be that momentous. Compliance to the law seemed to wipe out the possibilities for design thinking about real people’s real needs. Five years earlier we told the story of Patricia Moore, an industrial designer and gerontologist, who as a young woman took aging seriously and set out to experience the built environment—from street crossings to shopping—as an eighty-something. With the aid of a professional makeup artist, she navigated the world as an elder whose mobility and reflexes had been compromised by the natural process of growing old. In addition to her own research, Moore was also instrumental in helping craft the ADA. Through the years, her abiding commitment to inclusive design has never flagged (though it has been often frustrated by an uncaring marketplace).

As we developed our 9th Annual Next Generation Competition, focused this year on inclusive design, we asked Moore to serve on our Advisory Board and as a member of our jury. In between one of her trips to China and some other far-flung stop, we caught up with Patricia A. Moore, president of MooreDesign Associates, LLC. Her stellar credentials include communication design, research, product development and design, package design for such clients as AT&T, Bell Communications, Citibank, Maytag, 3M, Sunbeam, and scores of others. As February 18, 2013, the deadline for Next Gen entries nears, I decided to ask my friend Pattie to talk about design in the service of human needs, give some advice to practicing designers, as well as those just stating out. Here is what she told me:

Susan S. Szenasy: Your game changing work came into my consciousness when we, at Metropolis, ran an article on you at age 26 navigating the built environment as an eighty-something. This was 26 years ago, when I came on board as the editor of the magazine; your story has informed my thinking about design responsibility ever since. For those few who might not know your story, can recap the reasons for your so-called “cross dressing” adventure?

Patricia A. Moore: In 1979, when I undertook my “Elder Empathic Experience,” the focus on ageing was primarily a medical model for treatment of illnesses and the chronic conditions related to growing older, and being an elder. The architecture, design, and engineering communities were essentially ignoring older people, with the very erroneous assumption that elders were not “consumers,” but rather “patients,” and therefore, not their concern. My personal tipping point was the moment I was chastised by a superior at Raymond Loewy International. I was the youngest and only female industrial designer in the New York Office. We were gathered in a meeting room, discussing the design a refrigerator, when I asked if we couldn’t consider some door handle solutions that would be easier for elders and people with grasp and strength limitations to use.  The response was a dismissive, “Pattie, we don’t design for those people!” Those people? If the Raymond Lowey organization wasn’t designing for consumers of all needs, then who was? I realized that observation and surveying, while important tools, would not be adequate to communicate the findings I so passionately knew to be true. As a child, watching my grand parents and their friends struggle with the activities of daily living, I instinctively knew the failure wasn’t theirs, but the result of poor and inadequate design solutions. When I met the television and film make-up artists who helped to create the various elder personas I utilized, from the first day my foot touched a sidewalk in New York City (May 1979) until my last sojourn in October of 1982, I realized the means to provide a proper “wake-up” call for action. By becoming woman in her eighties, I was able to immerse myself into the daily reality of life as elders living in a youth-oriented society. 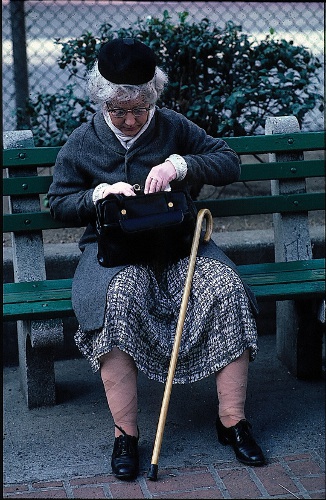 SSS:  As an 80+ you traveled to cities in the U.S. and Canada. This shift from a young, able-bodied woman to someone with decreased mobility, eyesight, and hearing was clearly an eye opener for you. Can you talk, in a very personal way about what every 26-year-old designer should know about what’s coming when they reach their eighth decade (it will be here in a blink of an eye)?

PAM: I always encourage students and young practitioners to remember and think of their grand parents, as they imagine and develop concepts and solutions.  A broader perspective of considering consumers of all ages and abilities will result in what I call “lifespan design,” something that is not only the ethical thing to do, but the best business consideration. I am adamant that no person can be called “disabled” or “handicapped,” but rather we all have some level of ability and capacity and by design, our needs and wants are met. As the global struggle to eliminate bias and prejudice in gender, race, and religion continue, so does the effort for equality and inclusivity in the arenas of “age and ability.” There is still a great deal of work to be done before we can or should rest.

SSS: Your work with elders and their special needs is about to become “fashionable” as the massive baby boom generation (75 or 78 million, depending on who’s counting) turns 60-plus. How will the boomers’ needs change our built environment, including the products we use?

PAM: 2012 marked my 60th birthday and I delighted in celebrating the benchmark with a year of parties and visits with friends across the globe.  I like to insist, with a wink and a smile, that I am being a good citizen and helping international economies, with all of the merry making and gift giving!  My enthusiasm for birthdays has converted numerous friends to look upon ageing with far more enthusiasm than is evidenced in the majority of current media and pop culture. Women, in particular, are made to fear growing older, with the constant barrage of what is considered “appropriate and desirable” acceptability and beauty. But white-collar males are also joining the ranks of people willing to nip, tuck, and lipo-suck their bodies, in an anxious fear that younger men will replace them as relevant and vital members of the corporate world.  I have always found this willingness to reshape one’s body as a tragic Hitlerian response to natural ageing. I often refer to the “Betty White” effect, or a recent embrace of elders as the new “cool”.  Ms. White’s impact on the much-needed cultural conversion of age-phobia has been remarkable.  She has emerged as the “grandmother” everyone wishes they could have and adore. The more we identify role models for graceful and happy ageing, the less of an affect ageism will have on us all. With the leading edge of the boomer cohort reaching their 65th year in 2012, there has been a significant recognition of the importance of design in supporting our basic desire to achieve and maintain the life we wish, and live where and how we each determine as ideal. The phrase “ageing in place” has been assigned to this focus (Let’s find something a bit more appealing and consumer-driven people!) and interior designers are embracing the challenge to create “lifespan homes” in a very positive way. Product design continues to lag in both scope and deliberateness for inclusion. In the eighties, I was delighted to serve as a member of the design team that assisted Sam & Betsey Farber to create OXO Good Grips.  I had hoped that the success of that product line would have encouraged much more universal design, but, sadly, that hasn’t been the case. Now, I am watching my parents struggle with their home and the products that they once commanded with ease. My Father cannot seem to master the remote control for his new cable television service. He was a professional electrician. My mother has reached the point where the rigors of maintaining their home cause her frustration and pain. History is repeating itself and I couldn’t be more disappointed in the failure of the design community to be proactive and responsive.

SSS:  In the 22 years that has passed since president George H.W. Bush signed the Americans with Disabilities Act (ADA) into law on July 26, 1990, the design community learned to comply, which does not mean they learned to design a new way. In fact, it’s been disappointing to watch how little design thinking has been applied to serving broad human needs, beautifully. How can designers re-enter the civil rights conversation started by the ADA as creative problem solvers?

PAM: I am not sure we can and I am even less certain that we should. We should be reminded that the Americans With Disabilities Act is primarily an equal rights law, for access to public spaces and employment. I was a member of the multi-disciplinary team that labored to create the ADA Design Guidelines. The effort was as difficult as the negotiations to avoid the “fiscal cliff”!  And I don’t doubt that any of us felt regulations and standards would provide for design excellence.  In fact, just the opposite has resulted. Simply meeting the ADA mandates merely means that a design has achieved a “passing grade.” Design exemplars are the result of eager enthusiasm for solutions that delight and serve all ages, all abilities; all people, as equal.

SSS: What can the “New Normal,” born out of the current economic crisis, do to revitalize Universal Design, in other words design for the full arc of human life, not just the healthy and the young? Where do you see the best new opportunities for designers? What do they need to learn, urgently, about the complex creatures they’re designing for?

PAM: The fundamental thing every architect, designer, and engineer needs to realize is that we remain very much the same person, the same consumer, for every day of our adult lives. The activities and environments you enjoyed in your youth will remain the things you desire and rely on until your final breath.  It is only when we can no longer manage the places and products we experience, not because of age, but rather because of changes in our level of mental and physical ability, that the quality of our life is in jeopardy. What we create today must serve us tomorrow.