The reporter behind a new investigative documentary discusses the health of New York’s water towers.

Two weeks ago, the New York Times reported that the city’s 17,000 water towers—for many New Yorkers, their primary source of water—were largely unregulated. Tests conducted at the water towers of 12 buildings in Manhattan, Brooklyn, and Queens found that eight of the tanks to be contaminated with bacteria. Among the contaminants was E. coli, where squirrel or pigeon excrement had seeped through an improperly sealed tank. In another, dead mice and pigeon bones were founded wasting away in the water supply. Needless to say, many of the water samples were unfit for human consumption.

The findings were compiled after an exhaustive investigation jointly led by reporter Frank G. Runyeon and former Times staff reporter Ray Rivera. The story, however, was months in the making prior to the Times involvement. Runyeon, a graduate of Columbia University Journalism school, had initiated the project while still a student, when he began filming and reporting on the state of New York’s water towers. The 6-minute film that accompanied the Times‘ coverage is a brief snippet cut from a longer documentary Runyeon is currently preparing for release. He has launched a Kickstarter campaign to raise funds for post-production costs. What follows is my conversation with Runyeon on the film, the Times piece, and, of course, the city’s water towers.

Samuel Medina: When did you become interested in New York’s water towers? What made you pursue them as an investigative subject?

Frank Runyeon: When I first moved back to the city in 2011, I stayed with friends in SoHo who had an incredible view of this water tower skyscape. I was curious about what was inside those wooden tanks and started asking questions. I was stunned to find out that we still use them for drinking water. And just by looking at them, I was a little skeptical that these tanks—some of them over fifty years old—were being properly maintained by the city’s landlords. So, we started consulting experts and climbing onto rooftops to find out for ourselves.

SM: When were water towers introduced on a vast scale as a means to deliver drinking water to the city’s population?

FR: The wood tanks first appeared in New York City in the late 1800s to provide water pressure to the upper floors of growing tenements and skyscrapers. The city’s aqueduct system can deliver enough pressure to push water up 5 or 6 stories, but as buildings grew taller they put pumps in the basements and tanks on the roofs to supply water to the upper floors. From the rooftop water tanks, water simply drains into a pipe that feeds showers, toilets, and taps.

Barrel makers were the earliest tank builders in New York and the tanks haven’t changed much in a century. They’re still essentially barrels of water on stilts. 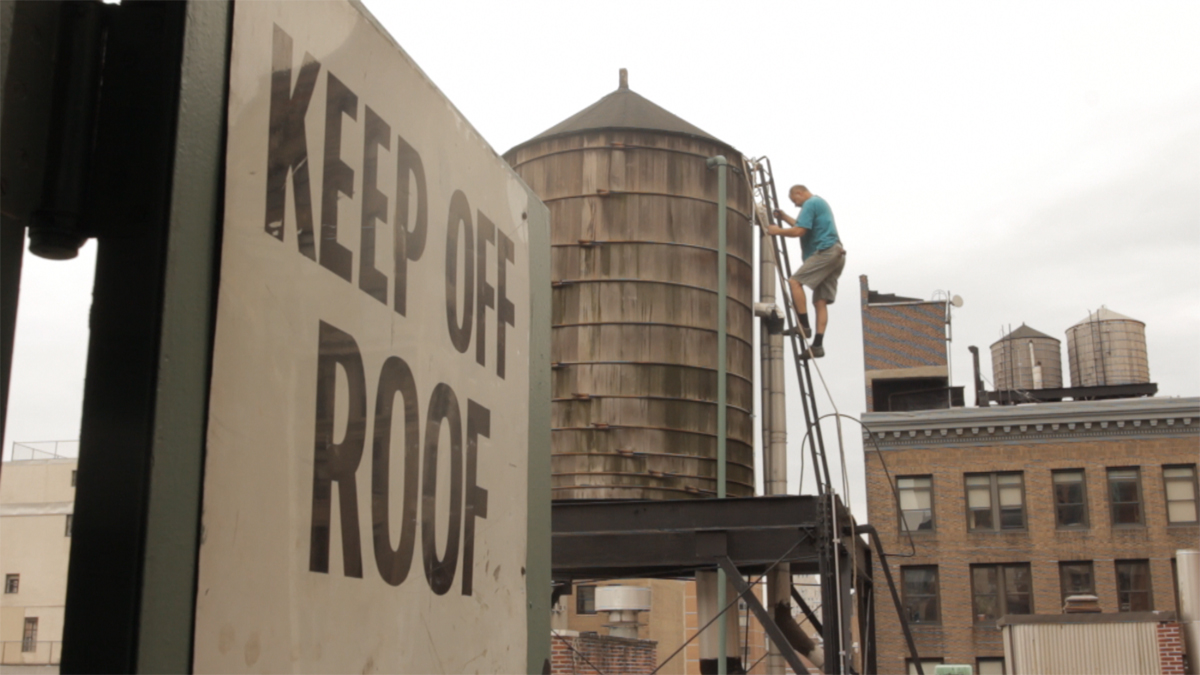 A veteran maintanence worker on his way down from cleaning an old water tank.

SM: At what point in the project did you take the story to the Times? What did their involvement bring to the project?

FR: We took the story to the New York Times once we had hard statistics showing that most landlords were not following water tank regulations and after we discovered evidence of E. coli contamination. Before we partnered with the Times, the city’s Department of Health and Mental Hygiene refused to talk to us. Only after we had the support of the Times did they agreed to talk. And of course, we had amazing support from editors and great reporting brought to the project by my fellow reporter Ray Rivera. Ray really delved into the city’s data and also found that incredible story about the super who discovered a pigeon bone in a tenant’s kitchen faucet strainer.

SM: What were the most common problems among the water towers you visited that led to water contamination?

FR: The experts we spoke with were pretty adamant that E. coli comes exclusively from animal or human waste. Water tank maintenance crews have a catalog of stories about finding pigeons and rodents inside these tanks. I’ve seen evidence of animal intrusion in these tanks as well. Animals clearly get into water tanks through poorly sealed tank covers and when that happens, they can contaminate the water.

I’d be very interested to see the result of a scientific study where investigators roll up their sleeves, climb up to the tanks, and get inside to take several samples. The city doesn’t do that. They do an annual paper audit of about 100 landlords’ records and generally rely on complaints from tenants to track water quality in the 10,000 to 20,000 tanks. That’s another thing—the city doesn’t even know how many water tanks there are.

SM: How has the coverage been received, both by the city and the public?

FR: Many people were disgusted and worried. Very few even knew we use the wood tanks for drinking water, much less that their landlords were likely jeopardizing their water quality. The National Resources Defense Council was pretty upset as well and demanded that the health department, EPA, and city council take immediate action. The city has been pretty quiet, with the exception of a letter to the editor from the health department downplaying the risk to public health.

SM: How does the film expand on the reporting and narrative introduced by the Times coverage?

FR: The documentary is really an adventure story that takes you along with us, as we go from rooftop to rooftop to uncover the contamination and neglect of the city’s water tanks. There are unbelievable discoveries and incredible footage we just couldn’t include in the 6-minute piece we cut for the Times. The documentary will also carry you through the Times’ story publication and could include any future hearings or city actions. Maybe it’s easiest to say it this way: The Times story introduced the basic facts, but the documentary takes you on our journey, diving inside these tanks, confronting city officials, and discovering firsthand what’s in your water.