Metropolis sits down with this year’s Pritzker winner.

Yesterday afternoon, the world discovered the identity of this year’s Pritzker winner, the 56-year-old Japanese architect Shigeru Ban. Metropolis sat down with Mr. Ban last week, when his selection was still embargoed information. The architect spoke about his influences, his beginnings, and his social work with Voluntary Architects’ Network, the organization Ban set up in 1995 to develop architectural models and solutions to post-disaster aid. In the nearly two decades since, Ban has constructed temporary shelters, housing, and community centers in emergency regions from Rwanda to the Philippines, using recyclable, sustainable materials like the cardboard tubes that have become his trademark. What follows is our edited conversation with him.

Samuel Medina: So when did you get the news?

Shigeru Ban: Sometime at the end of January. Martha Thorne [Executive Director of the Pritzker Architecture Prize] called me one day and told me.

Paul Makovsky: Were you surprised?

Yes! I thought she was just kidding me because I know her very well and I used to be on the Pritzker jury. I never expected it.

PM: What was your reaction?

SB: Well, I said, “Are you kidding me?” And I couldn’t express my feelings because I was in the car with my staff. And I had to keep it a secret.

PM: So you didn’t even tell your staff? How long did you keep it a secret?

SB: Of course not. Even now. They still don’t know. It’s been so difficult to keep a secret, even to my business partner. 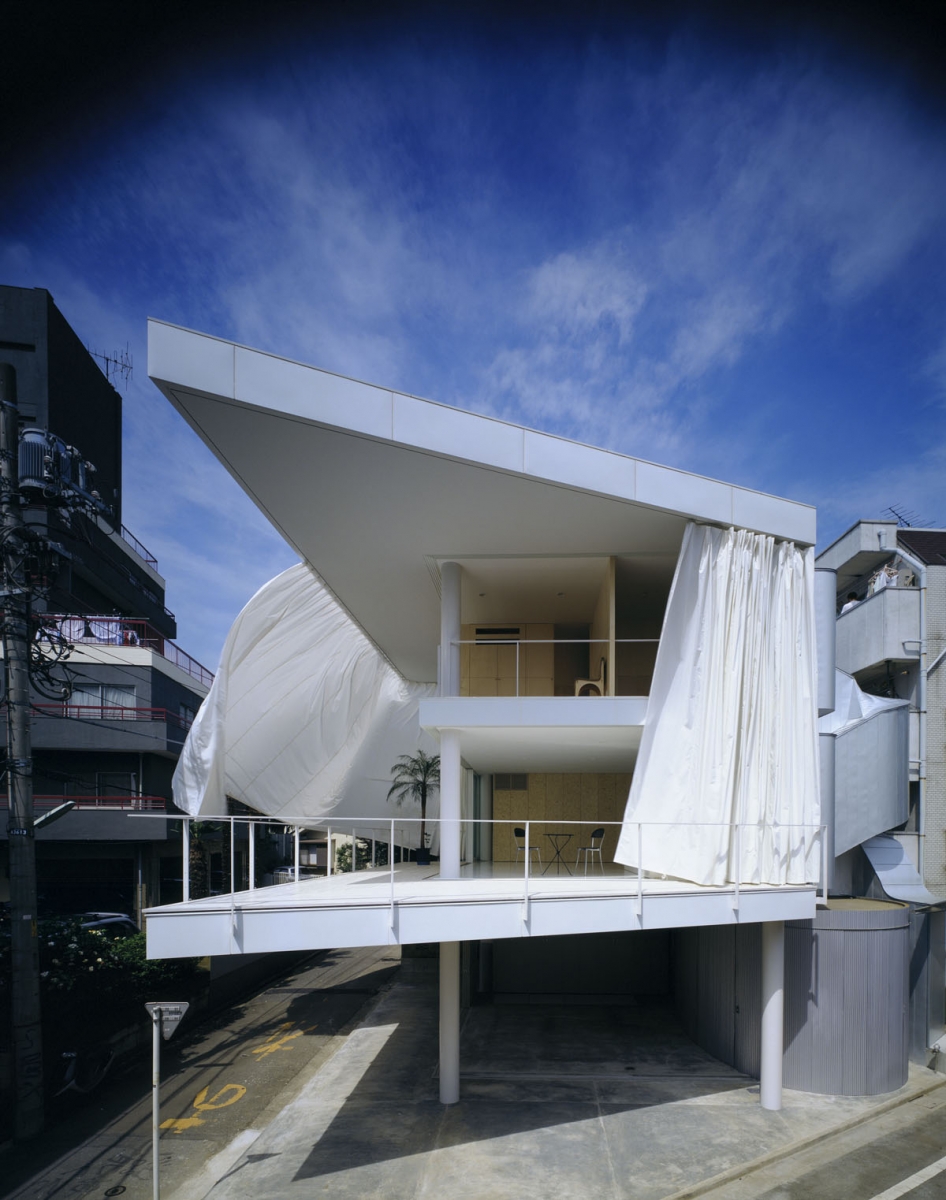 Ban opened his practice in 1985. He began with exhibition work before soon moving onto designing single-family homes and villas. These combined minimalist Japanese ambiance with a concern with tectonic detail. The Curtain Wall House (1995) in Tokyo added whimsy to the mix, using curtains as wall barriers.

PM: When you look back on your work, who are the big influences for you?

The architecture of Mies van der Rohe, Alvar Aalto, and Frei Otto, the German architect who did the space structures.

PM: You also went to the Cooper Union, which I think at that time was a very important and interesting place to be.

PM: But when I look at your work and their work, you clearly took a different path.

SB: I had a difficult time at Cooper Union. The attitude was quite different. 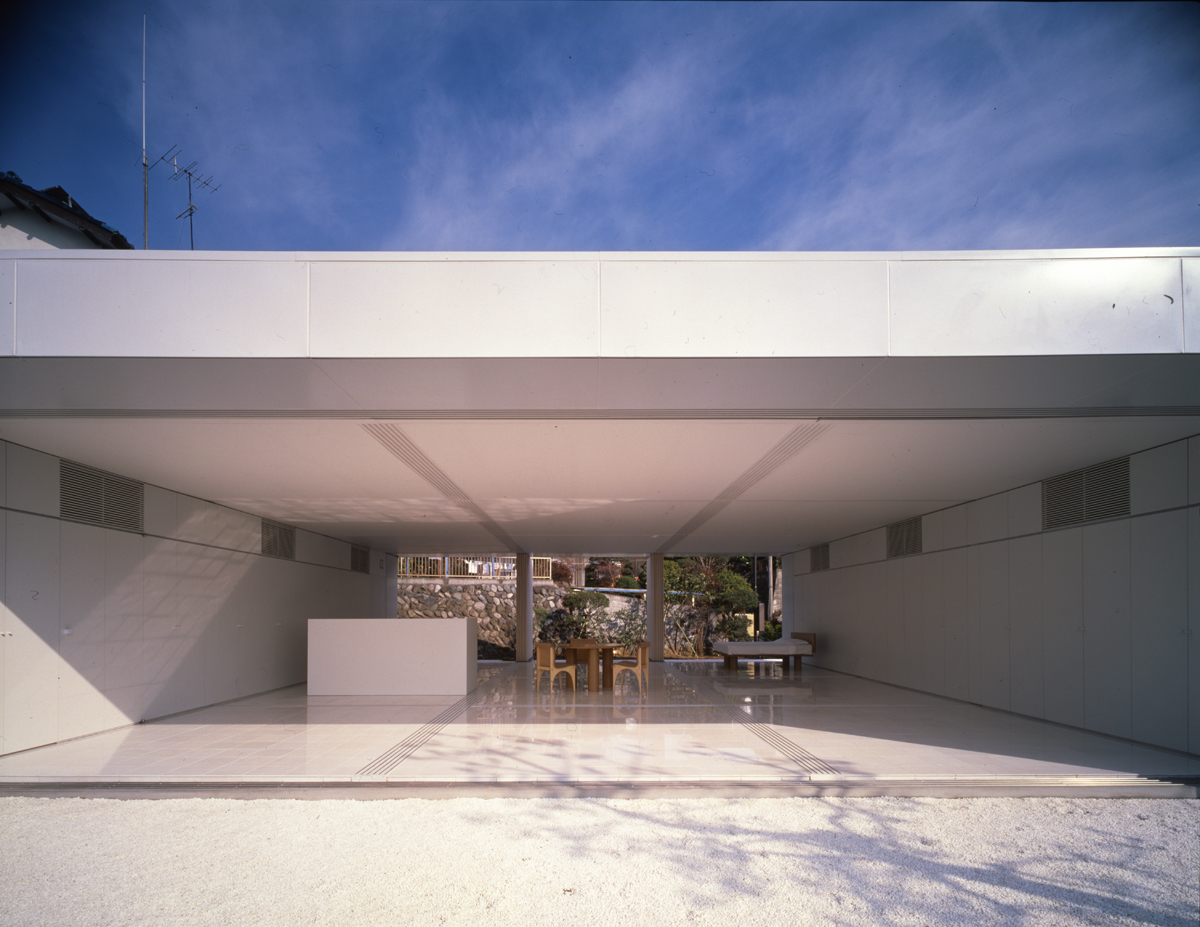 The Nine-Square Grid House (1997) recalls John Hedjuk’s eponymous project, which became a fixture at Cooper Union under the his tenure there.

SM: And how did you deal with that?

SB: I couldn’t. I had a big fight with Peter Eisenman and other professors. And they didn’t let me graduate. I had to postpone it. I had to do a few more months to do my thesis, and I then I presented it only to John Hejduk, not Peter [Eisenman], so then it was okay. [laughs]

SB: Actually John was very interested in structure and we had to take classes in tectonics, to really study the idea of a structure.

PM: The social element is a huge part of your process, of why you’re doing architecture, and I could see that in someone like Alvar Aalto. Was there someone who influenced you to go in that direction? What made you turn away from pure formalism and theoretical issues in the 70s and 80s, when that was where everyone was heading?

SB: Simply, I was not interested in that kind of movement.

SM: So why you were interested in this social kind of architecture?

SB: I’ve been asked by many people what was my influence in doing this. I have no idea actually. You know that the British TV program, Thunderbirds? This is an international rescue team hidden in an island, with special training and technology to rescue people in danger. I say that as a joke because I cannot think of anything that influenced me to do this social work.

PM: But then from a structural point of view, why were you interested in using cardboard, in a way your main focus.

Since I was a student, I didn’t like to be influenced by others but only [the] few architects who were not influenced by the fashion. Anytime there was a big movement—Modernism or Constructivistism, even Baroque—architects like Otto invented their own structural systems or materials. They made their own style. I wanted to make my own structural system. So when I started using paper tubes, I thought it can also be an interesting material. 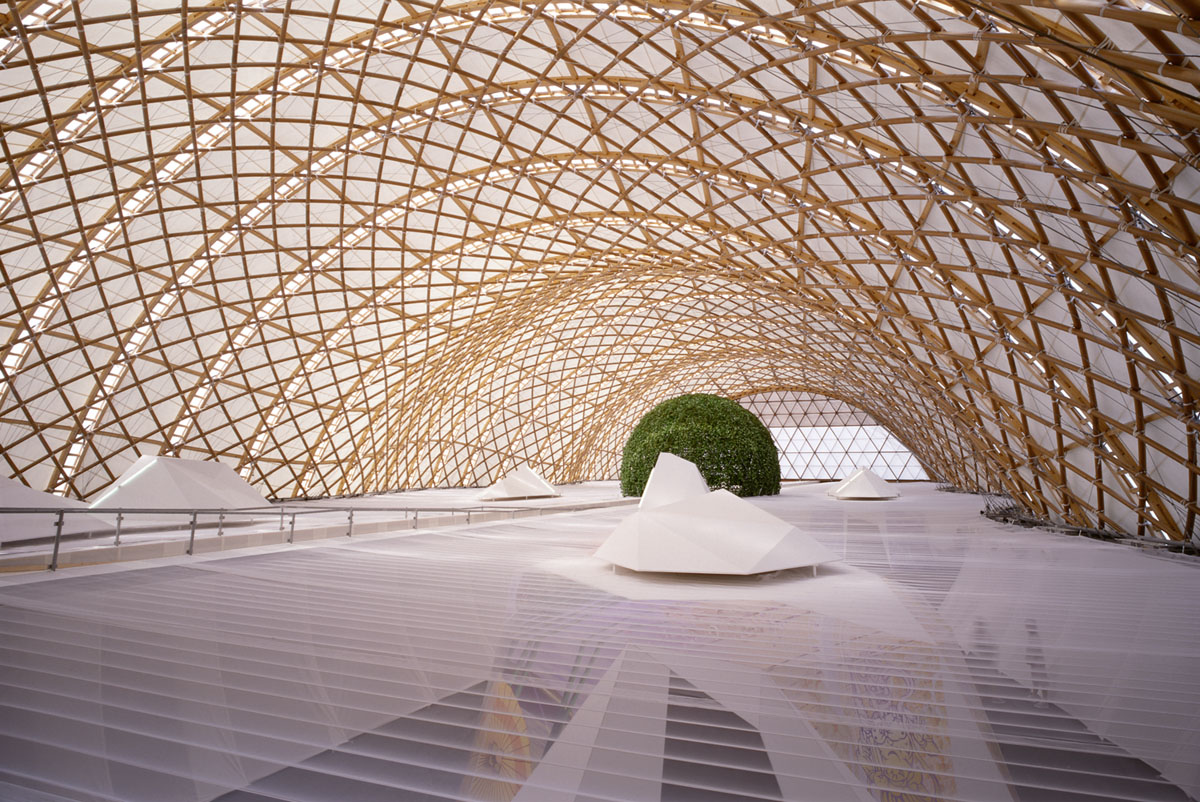 Ban collaborated with his mentor Frei Otto on the Japan Pavilion at the Expo 2000 in Hannover. The structure consisted of cardboard and paper bent into a gridshell form.

SM: For me the social aspect comes from the structure and material because cardboard is so readily available. It’s cheap, everyone can use it.

SB: Yes, but it’s combined together. Structure and the social. But still I don’t know why I started using it. I was really disappointed by the profession a lot, because we’re mainly working for privileged people who have money and power, who need architects to visualize that power. I was a little bit tired of working with those kind of clients. Architecture is such a lucky or easy profession, you’re always working with people who are happy to make a house. But a medical doctor or lawyer is always working with someone who has a problem. So I think we, as architects, can use our experience and knowledge more for society.

PM: Your projects for the tsunami victims in Japan must have been very important for you. What are you doing there? Is that project continuing?

SB: They are not only in Japan, they are everywhere. Now, I’m working in Phillipines, they had an earthquake last October and heavy typhoon in November.

SM: And you finished the church in New Zealand, in Christchurch. 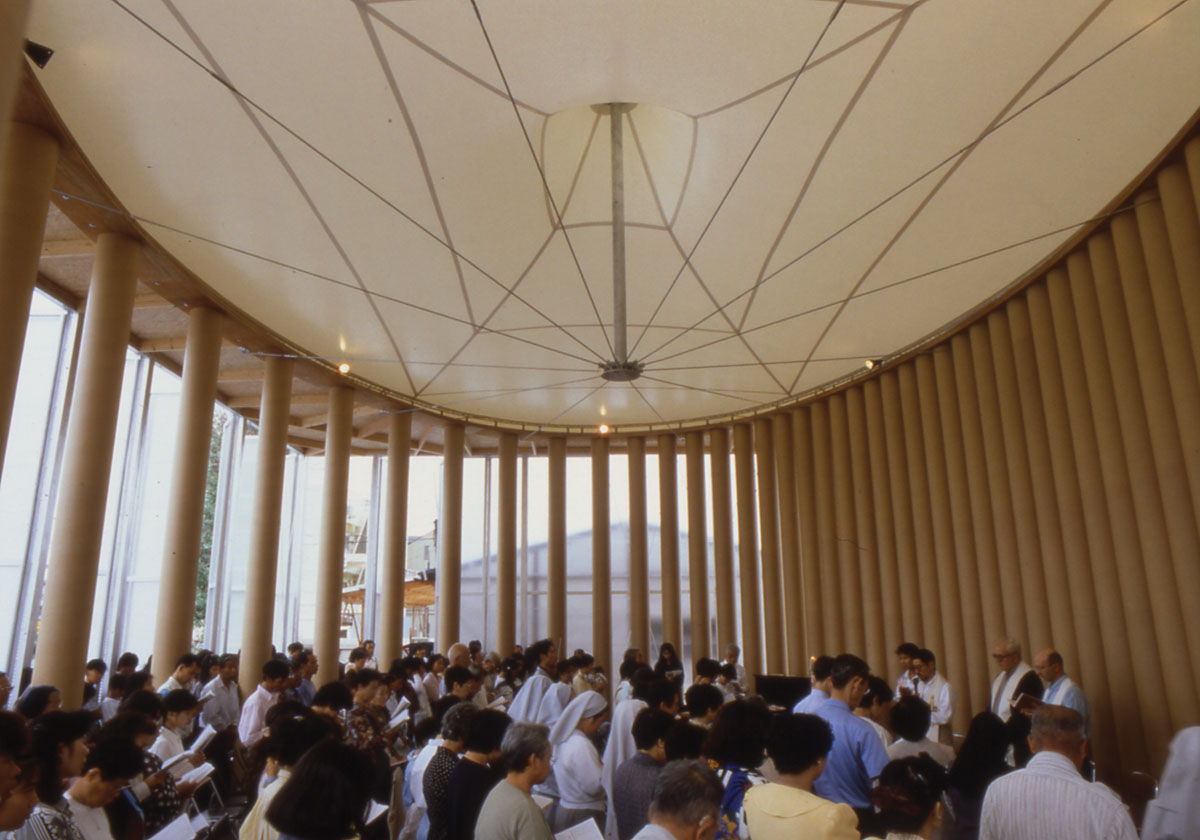 The Paper Church Kobe gave Ban a chance to further test out his ideas for structural cardboard, which he first used in a 1986 exhibition on the work of Alvar Aalto. The project, which doubled as a community center, replaced a local church destroyed by the 1995 Kobe earthquake. It stood for 10 years until it was dismantled and reassembled in Taiwan. 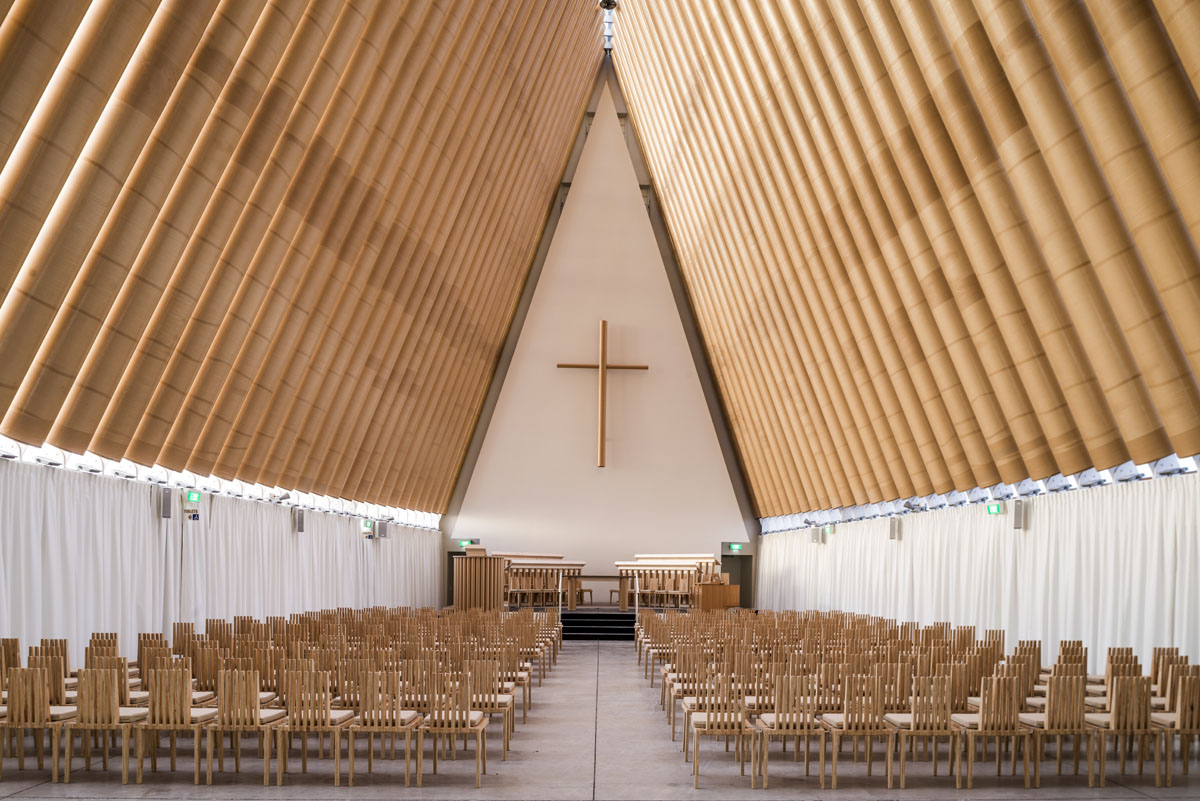 The Cardboard Cathedral in Christchurch, completed last year, saw Ban returning to ecclesiastical architecture. The church’s massive cardboard tubes are splayed in an A-shape, while the triangulated facade is filled in with stained glass. It serves as a beacon to the ongoing recovery of Christchurch, nearly three years after the city was racked by a devastating earthquake.

PM: In a way, there are so many disasters that happen everyday. Some people say it’s because of climate change, because of the way we live and the way we consume. How do you decide to take on an emergency location?

SB: It’s really true that today we have more natural disasters. They’re increasing, but also because of globalization, we are so related with other people and countries. If you’re looking for only happiness for your own country, it’s impossible, we are too related with each other. So in order to be happy, we have to make other countries also peaceful or happy.

PM: How are you continuing the project in Onagawa and elsewhere in Japan. Are you still involved with those communities? Because my understanding is they’re still issues at hand in places like Fukushima.

SB: Fukushima is only one of the area affected by nuclear plant. The problem is much wider, in the north because of heavy tsunami, the government decided to reclaim the  whole land. The recovery effect is something we never experienced before. It’s a very complicated problem. 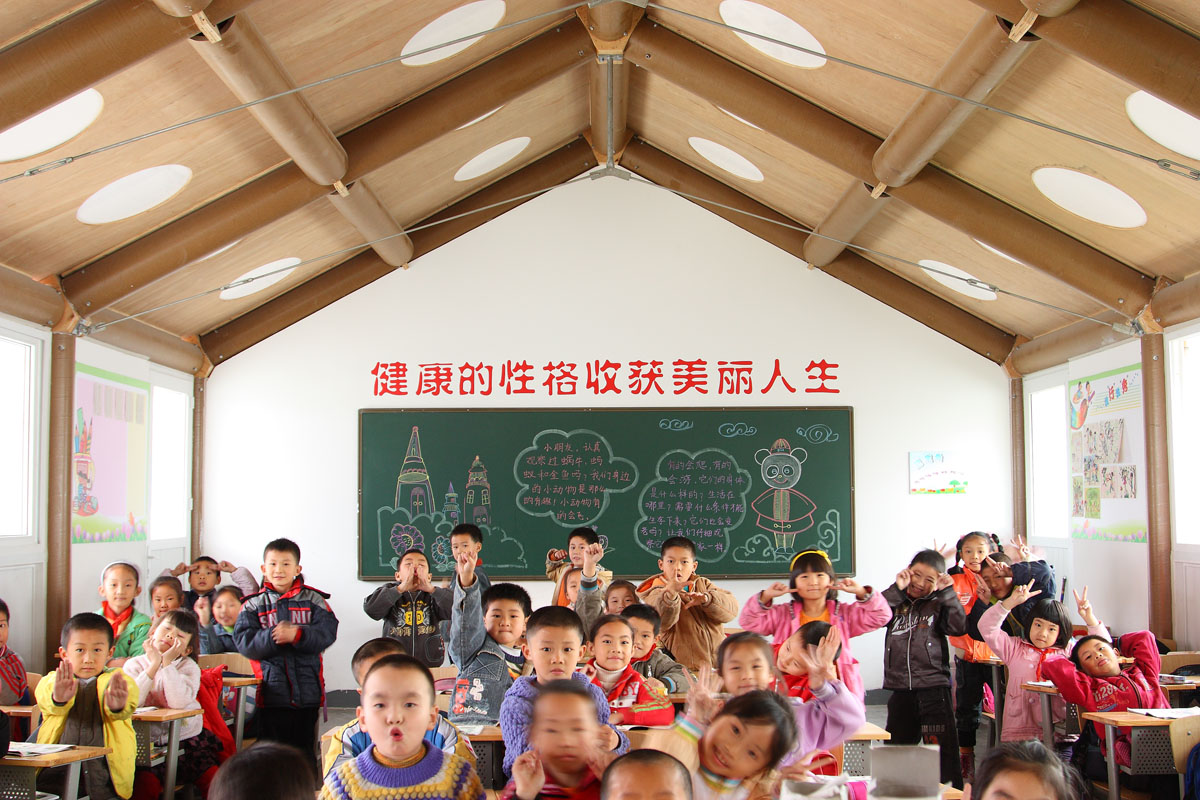 Following the 2008 Sichuan earthquake, a Chinese-and-Japanese partnership was established to build several temporary classrooms to serve the local youth. Ban designed the Hualin Temporary Elementary School (a series of three buildings with nine classrooms) using paper tubes. The school buildings, the first structures of their kind in China, were the first educational facilities rebuilt in the affected area. 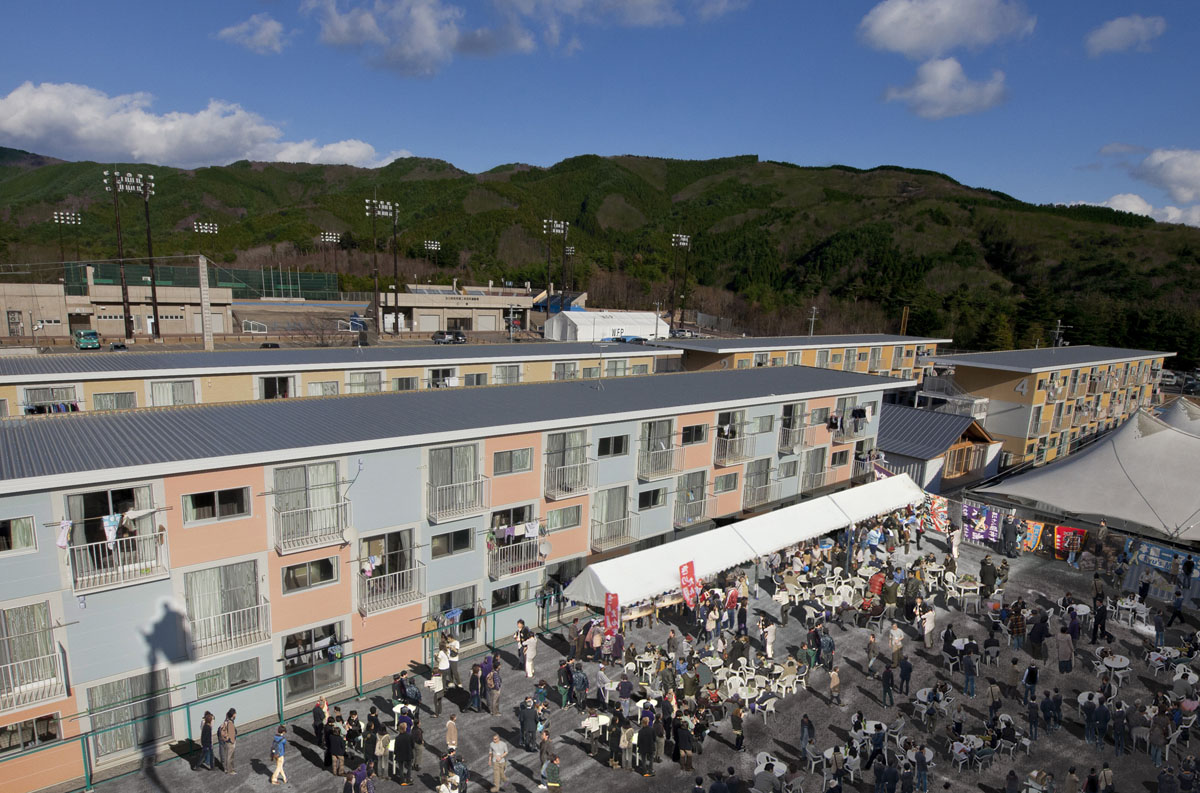 In 2011, after Japan was hit by an earthquake and tsunami, Ban traveled to Onagawa, Miyagi to assist victims there. He used shipping containers to construct rows of three-story housing. The resultant units were bright and smartly furnished, giving locals the space and privacy they needed in a time of grief and shock.

SM: How do you, as an architect, use your skills and knowledge to address these problems?

PM: What have you learned from each emergency that you can bring to the next project?

SB: Each situation is very different. The solution must be different depending on the climate, the economic revenue, the religion. There are no standard solutions, that’s why I have to go there myself to find out what exactly is the problem, what materials are available locally, what kind of team can I put together locally. So I cannot just bring my former experiences to a project. It’s just like building. We have to visit the site and have to understand the site. We just have to listen to the people.

PM: You have been on previous juries for the Pritzker prize. Many architects that have won haven’t been expressedly interested in social architecture. Was it frustrating for you on these juries?

SB: I think it’s actually good because each jury has a different interest. The Pritzker needs diversity.

SM: What’s next for you?

I just want to continue. It’s not a next step, it’s a continuous process.

PM: How does education fit into that process?

SB: Education is very important. I had such a great education in the U.S. with great professors and architects. I cannot give them back anything, the only thing I can do is to teach the next generation. I always bring my students to disaster areas. It’s a part of their education to pass on that knowledge. That is a part of my practice and activity that I want to continue. Many architects who have become very famous with many big projects are too busy to teach. I have to control the number of projects I have so that I can continue.