The Viability and Vision of Oyster-tecture

The vision for oyster-tecture is to create a network of oyster reefs that interlink from Texas to Maine. When implemented at that scale, it would be larger than the Great Barrier Reef off the coast of Australia and would create an underwater wilderness without comparison. It would serve as a nursery, grocery store, and backbone for all marine life native to the eastern waters of North America. Such a network would mimic the conditions that existed before the shellfish populations collapsed. It would also kick-start the magic of large-scale ecological services that are aligned with continental conservation.

Along with the biological benefits, an oyster-tecture shellfish ecosystem would make up a continental-scale storm water management system that would spur tourism growth, public health, and a biologically rich living laboratory. With all of the benefits, you might think launching an oyster-tecture project would be easy. It’s anything but easy.

Oyster restoration is governed by individual states; so when you cross borders, the policies allowing restoration projects change. As you travel north, regulations get tougher. New York and New Jersey, for example, have all but outlawed oyster restoration – even academic projects are suspect. New York has actually loosened some of its grip in the last few years, but New Jersey is still hostile toward the idea of oysters for anything but purchase.

Oyster-tecture wouldn’t be developed for consumption. Their sole purpose is to filter contaminants from the water column and normalize ecological functions. New York and New Jersey have thriving oyster farming industries worth hundreds of millions of dollars, and restoring oysters could endanger them. Wild populations could damage these farmers’ livelihoods, and that’s a losing situation. It should be noted that if people didn’t love eating oysters so much and these farms had not been developed, we could have lost all oysters everywhere. And so for oyster-tecture to be successful, it has to integrate the needs of oyster farmers with the needs of infrastructural solutions.

Having been actively involved with an oyster restoration project since 2007, I contest that oyster-tecture is the most cost-effective measure for managing polluted estuaries and storm water runoff in urban areas. It is a unique, on-the-ground methodology that brings together scientists, community leaders, governmental agencies, business owners, residents, volunteer groups, and designers for one common goal. If done correctly, oyster restoration can outperform the more technologically advanced options, such as filtration facilities, at a fraction of the cost. 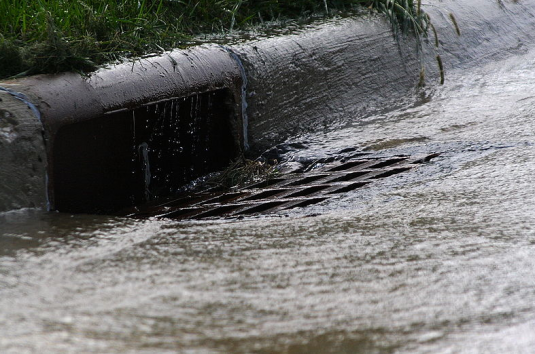 Many cities throughout the coastal regions of the US are struggling with the exponentially worsening problems of runoff, water pollution, fish stocks, and beach closures. Along with hypoxia, contaminated runoff causes beach closures due to unhealthy fecal bacteria counts. No one wants to swim with fecal bacteria, and closing the beach damages tourism revenue. Many beach communities depend on tourism for economic stability. A century ago, most crowded coastal towns were small and could manage rainwater runoff within localized estuaries. Today, 50% of the US population (a whopping 150 million people) lives within 100 miles of the coast. The increase of density has increased the amount of impervious surfaces due to new housing, roads, and parking lots. Municipal governments have been unable to keep up with septic system improvements.

From small metro areas like Myrtle Beach, SC  (population 200,000) to megacities like New York (population 16 million), out of date storm water infrastructures are causing havoc on human and ecological communities every time it rains. In NYC, the city deals with storm water via a combined sewer system (CSS). Runoff is routed into the sewer system and excess is dumped into the Hudson and East Rivers as raw sewage. In Myrtle Beach, runoff is routed through a network of estuaries that local residents call swashes. The swashes drop into the Atlantic Ocean by crossing the beaches that 8 million visitors come to each year. Periodic beach closures are common because of fecal bacteria as a result to old infrastructure and storm water practices.

The actual cost of reestablishing the reefs is very low. Recycling programs can be coupled with the effort to remove oyster shells from the waste stream produced by restaurants. Recycled oyster shells are bagged and used to build the reefs eliminating the need for other materials. Spats (juvenile oysters) are attracted to the shell making the seeding of new reefs easier. Volunteers and community organizations can offset the cost for small-scale projects. Larger projects would require additional labor costs.

Oyster-tecture would have to influence more than just reef restoration, though. Added costs would be incurred. Testing is needed to determine the best locations for new projects, riparian areas will need to be reestablished and old conduits, piping, and channeling will need to be removed. The drainage systems that route water to estuaries cause salinity levels to crash and water temperatures spike, making mortality rates for oysters too high to sustain a new population.  In essence, civic infrastructure would need to be engineered to provide a strong environment for oysters to thrive.

Urban oyster-tecture infrastructure would take up more land than standard techniques, but the end result is beneficial for everyone and everything. It is nearly self-sustaining and creates value-added urban landscapes.  Many impaired estuaries in coastal areas are an unsightly blight. Redesigning them to be a hub for oyster-tecture could bring them back to life as new park space, preserves, and wild lands. They also provide a charming example for cities trying to differentiate themselves by showing their commitment to sustainability and the future.