Recently I had a full day layover in Paris on my way back to New York. I knew  exactly what I was going to do with that day: Check in on a favorite building and see how it has kept up with time. The Centre Georges Pompidou’s (opened in 1977) iconoclastic design by the team of Renzo Piano and Richard Rogers has had a strong appeal to me, ever since I first saw a picture of it. I’ve been there a couple times before, but a lot has happened in architecture  (and in the world) since then. I was curious to see if its appeal has held up since my last visit.

I arrived in the Pompidou area as the overcast, wet day was getting on its way; the cafes still mostly closed, chairs up and locked to the table. I was making my way through the streets, not too sure of the directions to go when I caught sight of the tubular structure. Right away I knew this was going to be an exciting architectural experience all over again!  Apparently I was not as alone in thinking this. A long line was forming outside the building, as people waited for the museum to open (even though it was still about an hour from that happening).

When I reached Place Georges Pompidou, the open plaza that functions as the fore-court to the building, my first thought was that it’s still the same as it was the first time I was there – how welcoming that unusual structure is even amidst the mostly classic, traditional “Parisian” architecture.  Whether it is the scale, it’s structural openness  and transparency  or just  the breathing  space  allowed by the plaza (that  gently slopes  downwards towards the building) ,  the industrial-  looking  building  invites you to come in and explore it, rather than projecting  a feeling of threatening menace. Even the back elevation, with all its colored  pipes and service shafts and elevators, sparks interest and feeds the curiosity of how all the parts  fit together and what other surprises might await us inside. 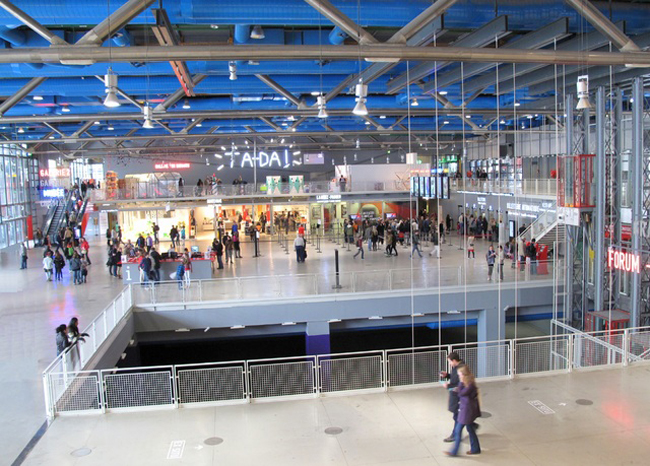 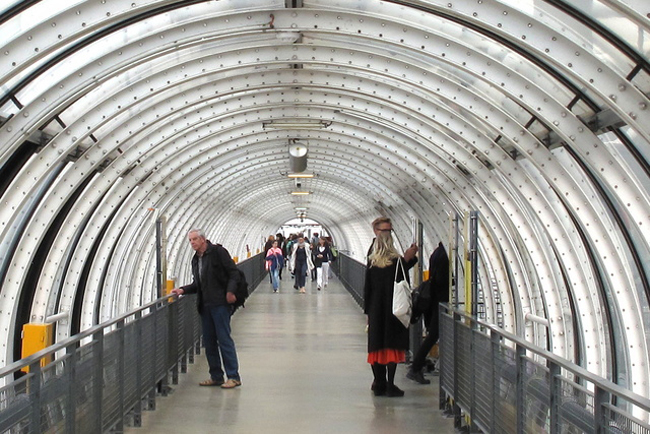 When the doors finally opened, the sky above seemed to be attempting to do the same: The drizzle stopped and clouds were breaking here and there. I hoped that I’d able to get a few shots with good sunlight! Once inside, I was taken by the spaciousness of the main lobby and how organized and natural the flow is. I did not recall it being such a generous and clear open space, contrasting with what one would expect from the building’s intricate external appearance. The well- organized set up gives visitors a chance to either visit all galleries, shop or dine, or simply enjoy the architecture, riding the external escalator all the way to the top for fantastic views of Paris. The ultra-flexible galleries, spread throughout the open floors are in keeping with more traditional museums. These spaces, designed in an efficient and neutral white box style, have been re-organized a few years ago by Gae Aulenti to bring them up to date in the latest museum conservation standards. 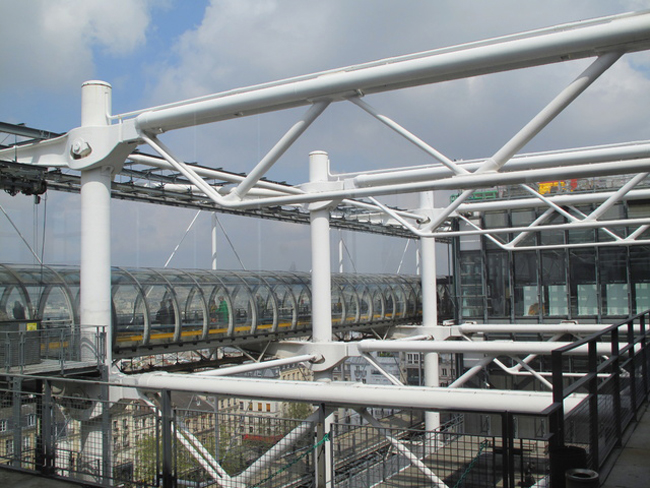 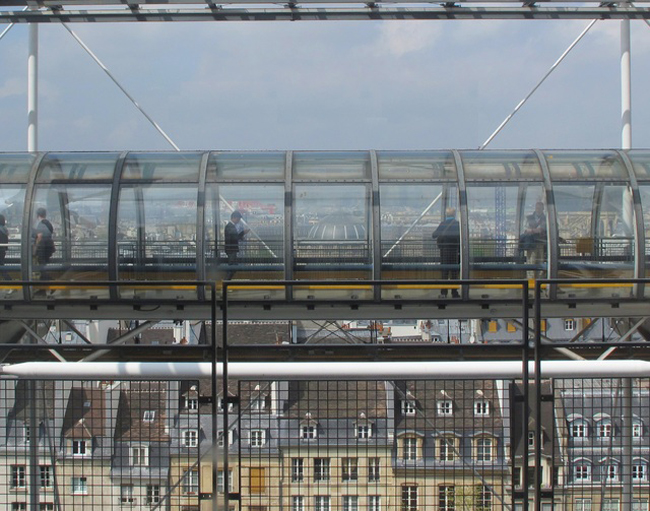 At the top floor terrace, the structure frames open views of the city, adding an interesting perspective and connection to Paris. Up there also the open air café with its reflective pool and the exclusive  “George” restaurant with its primitive space age design (by architects Dominique Jacob and Brendan MacFarlane) create a feeling of a contemporary oasis,  giving the whole building  yet another reading. 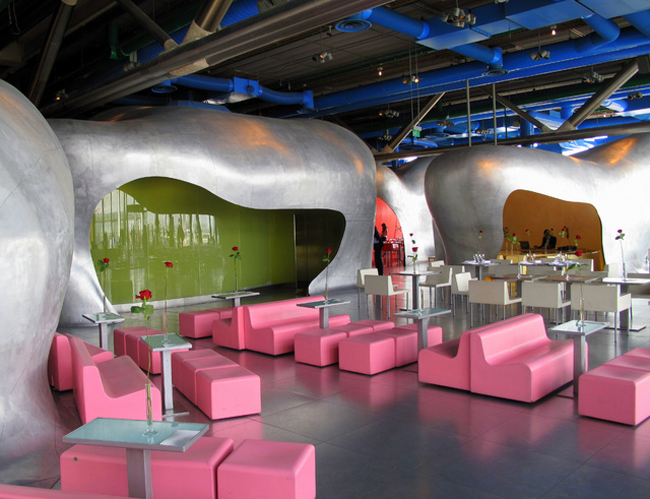 As I make my way out and back to the Place Georges Pompidou the area is fully awake: Cafes are open and busy with patrons, street performers are busy at their craft, kids play soccer (while the more art- inclined draw), tour groups congregate before starting their visit (or regrouping afterwards), and the library housed in the building is brimming with students. I take a break and go across the plaza for a brief visit to the recently opened Atelier Brancusi.  Discreetly nestled in the northern side of the plaza, this new addition to the Pompidou complex, a simple, square structure designed by the omnipresent Renzo Piano, houses a replica of Brancusi studio as it was just before the artist passed away, leaving its contents to the French government.  An exercise in architectural restraint, the pavilion neither adds or takes away from the balance of the main building and the plaza, yet it quietly expands the museum. 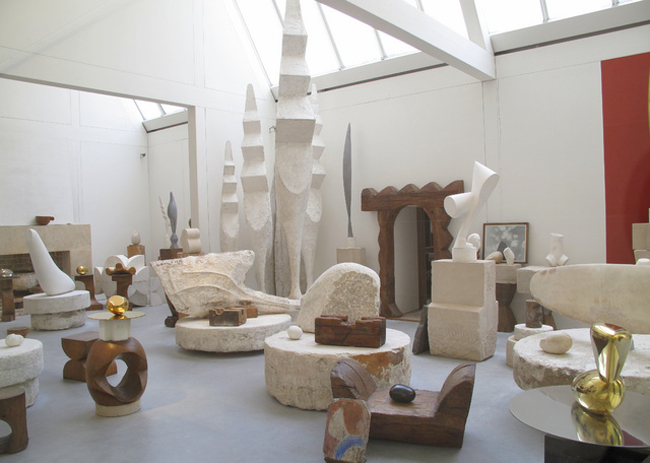 The whole area is alive and there’s no denying the role of the building, of the museum, of the design, on feeding the excitement and energy around it. The museum’s location makes it an active and important part of Parisian life, easily accessible; the design facilitates and stimulates that integration further, helping achieve  the ambitious  civic  goals of the institution.

Designed over 40 years ago, the architecture still feels as fresh and exciting as ever. It still has that “NEW” quality that inspires visitors to get into a different state of mind as they enter the building and explore its many possibilities and options.

Today museums have become a hot architectural topic, with debate about their daredevil designs being merely a branding strategy by their corporate powers that be. Although envisioned prior to this trend, the Beaubourg (as the Pompidou is known locally) has indeed become iconic, truly a watershed moment in architectural design. But its strength goes deeper than that. This is evident in its successful assimilation into the context, in how it has served the complex purpose it was designed for, and in its ability to capture our imagination again and again.

It was in Paris for only a day. A day well spent, as if visiting with a “friend” I haven’t seen in a long while and unsure if we were still relevant. Happily, the  “frisson” was still there and inspired moments abounded. I left with these images that I now share with you.