The first of a two-part series, the authors behind “Icon or Eyesore?” explore the Brutalist architecture of the city’s strange island town.

In our last post, we questioned the ongoing conversation about concrete buildings in our cities. Now, we zero in on a microcosm of this debate, New York’s Roosevelt Island. With its sprawling complexes of concrete housing clusters, the push-pull tension of preserving history and creeping speculative development is palpable.

To date, Roosevelt Island’s courageous concrete structures have continually escaped the wrecking ball. Is this luck the good grace of architectural achievement or a perennial oversight? Perhaps neither. As the island prepares for a major new master plan, urbanists should take a critical look at the modern mecca next door. What has saved its Brutalist townscape from the fate of its concrete kin elsewhere? And will it remain unscathed? 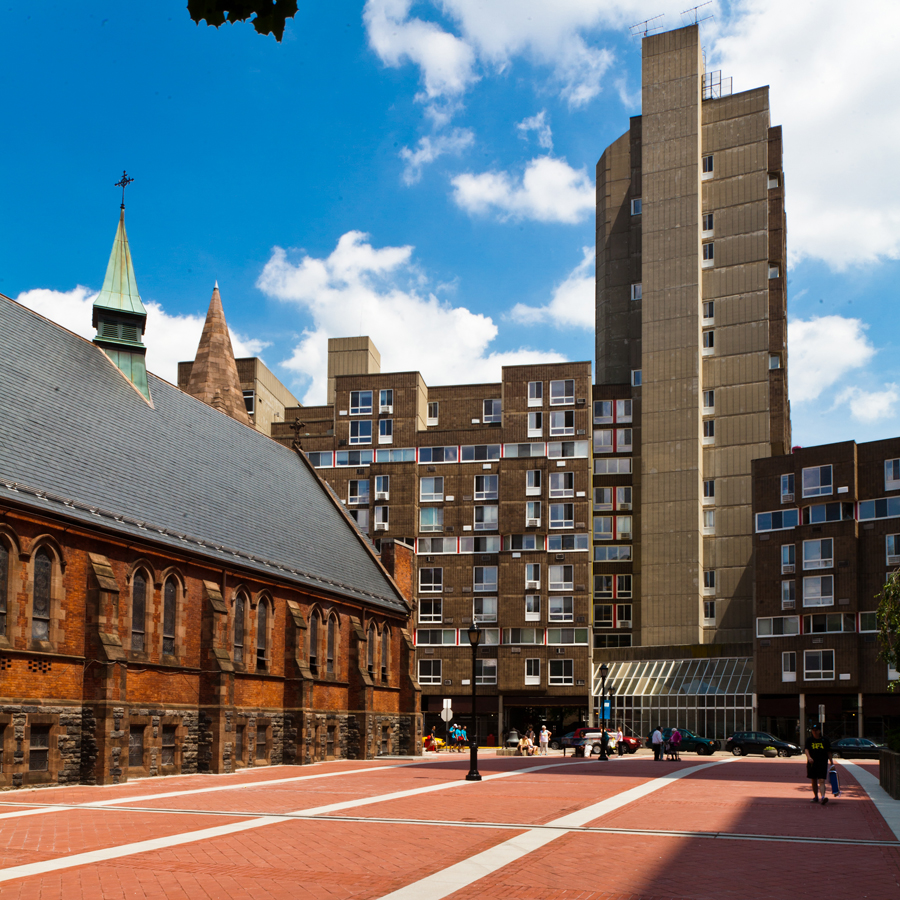 Among the housing towers lurk the relics of an older settlement. The island’s network of landmarks could have been forgotten or discarded by planners Philip Johnson and John Burgee—whose 1969 master plan for “The Island Nobody Knows” was partially realized—but the architects thought better. Instead, a handful of the island’s existing structures were preserved and subsequently absorbed in the 1970s haven of concrete that would follow. The new Roosevelt Island appeared at a moment when public housing and the modern city were being reconsidered. The usual monotony of towers in a park was tempered by unconventional diversity. The soaring housing designed by Sert, Jackson & Associates, and Johansen & Bhavnani was planted amid the saved sites: James Renwick Jr.’s  Smallpox Hospital (1856), the oldest house (1785), the chapel (1889), and an octagonal asylum tower (1839), to name a few.

When a new face for the island began to surface in the 1970s, architects were becoming less interested in bold monoliths, instead pursuing the material subtleties of precast construction. This can be seen in Josep Lluis Sert’s so-called micro-city, the Harvard Science Center (1973), which includes an innovative combination of purple precast concrete with in-situ structural and non-structural elements. On Roosevelt Island, Sert’s Eastwood housing is raised off the ground by a series of smooth poured concrete columns, forming a pedestrian friendly arcade.[i] Above, the skeleton is shrouded by precast units with striated tiling, resembling Paul Rudolph’s embattled Orange County Government Center (1967). This is quite different from Johansen’s two buildings just across the street. They expose rough board-form concrete near the ground, but then conceal the structure with smooth precast panels above. At first glance, the comparison between Sert and Johansen’s towers yields only a sea of cement. But a more careful look reveals opposite approaches: a smooth base and coarse cladding for Sert; a rough base and smooth skin for Johansen. More than just concrete, this is a conversation between thoughtful companions. 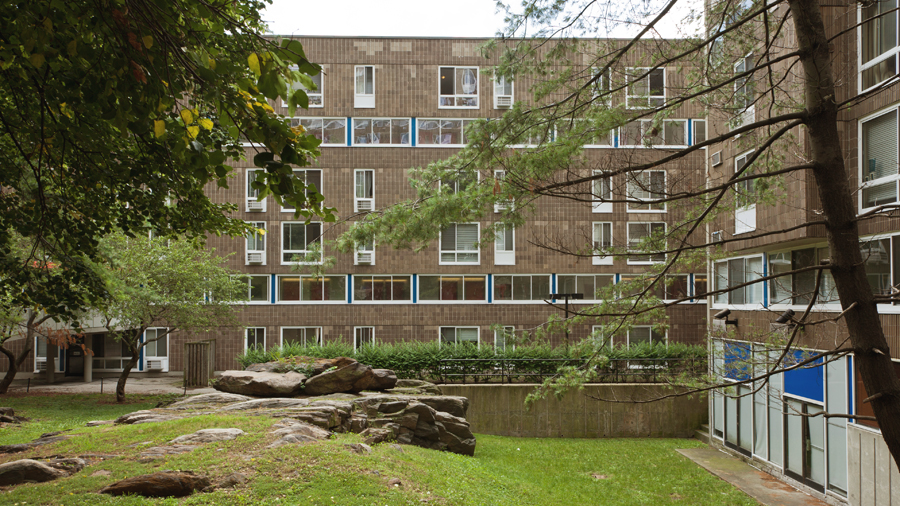 The interior courtyard of Eastwood Housing 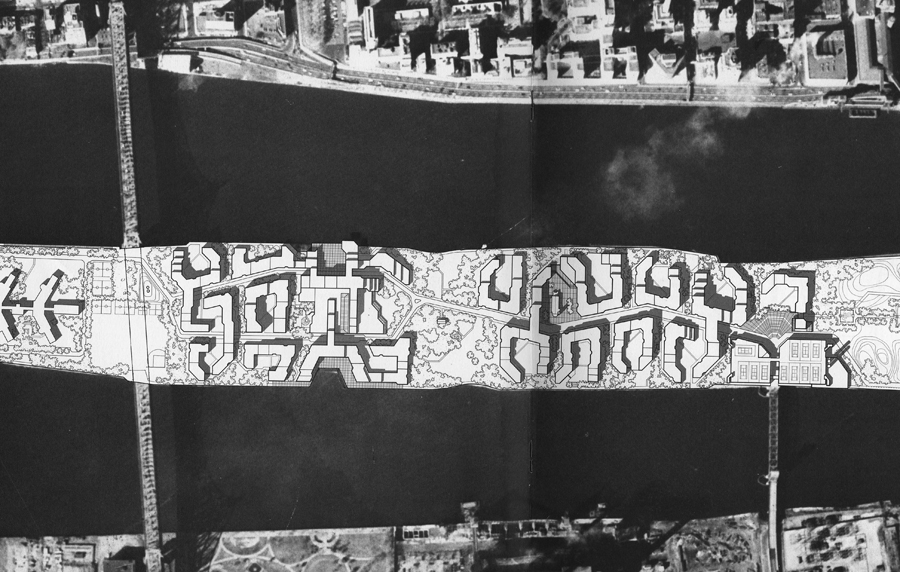 Beyond these two voices, the re-imagination of Roosevelt Island, at the time, manifested an awakening of activist-architect-urbanists. New York’s new island town became a symbol of the nascent urban design (UD) movement, led by Sert himself. He established the first UD program at Harvard while GSD dean there in 1960. Along with Sert, UD members Wilhelm Von Moltke and Jacqueline Tyrwhitt described the program as trans-disciplinary interactions between architecture, landscape architecture, and urban planning. The UD program also highlighted engagement and community. Influenced by speakers like Jane Jacobs and Lewis Mumford, it’s no surprise that Sert’s students designed the clenched fist graphic for the student uprisings that overshadowed his final days as dean. So Roosevelt Island was the perfect test site. In a city shaken by the civil rights movement, white flight, and an unpopular war, the site’s master planners Johnson and Burgee reached outside the box to build real change. They reconciled diverse concrete structures with historic landmarks to help create a real, vibrantly modern place. The result was striking and collaborative: refined, interwoven, and cumulative—a cross-disciplinary exemplar of urban design.[ii]

Today, while the island’s towers stand for uncompromising concrete, they are also icons of dialogue, activism, and engagement. Does a narrative about concrete outweigh this broader conversation? Time will tell. In our next post, we’ll look at the future of Roosevelt Island.

Icon or Eyesore? is a Metropolis blog series by Bruner/Cott & Associates, a Cambridge, MA, architecture and planning firm for which the adaptive reuse of 20th century modern buildings is a core area of expertise. This series offers an insider’s look at the push-pull of saving historic buildings when public and professional sentiments are mixed. Drawing on the firm’s long-term experience in giving modern buildings new life, the series includes observations—both technical and experiential—about news-making structures as they reach and exceed the fifty-year “tipping point” at which historic value is re-assessed.  Follow Bruner/Cott on Twitter: @BrunerCott.