Small projects can have big impact. For instance, take the two Silver Medalists in the 2013 Rudy Bruner Award for Urban Excellence (RBA)—The Steel Yard in Providence and the Congo Street Initiative in Dallas. Each is inspiring people to think differently about development in their neighborhoods and cities by promoting the value of collaboration, taking risks, and pursuing an organic, locally driven approach to rebuilding urban spaces and communities…one project at a time.

Last month, Simeon Bruner and I traveled to Rhode Island and Texas to present these awards. The two ceremonies reflected each winner’s deep roots in their communities as founders, staff, residents, and friends gathered at the sites to celebrate, along with representatives from past RBA winners 1997 Silver Medalist Providence River Relocation Project and 2011 Gold Medalist The Bridge Homeless Assistance Center (Dallas). Attendees at both ceremonies reflected a shift toward creative, “do-it-yourself” young people that are anchoring development in both locales as they put down roots, invest in careers and homes, and start families. 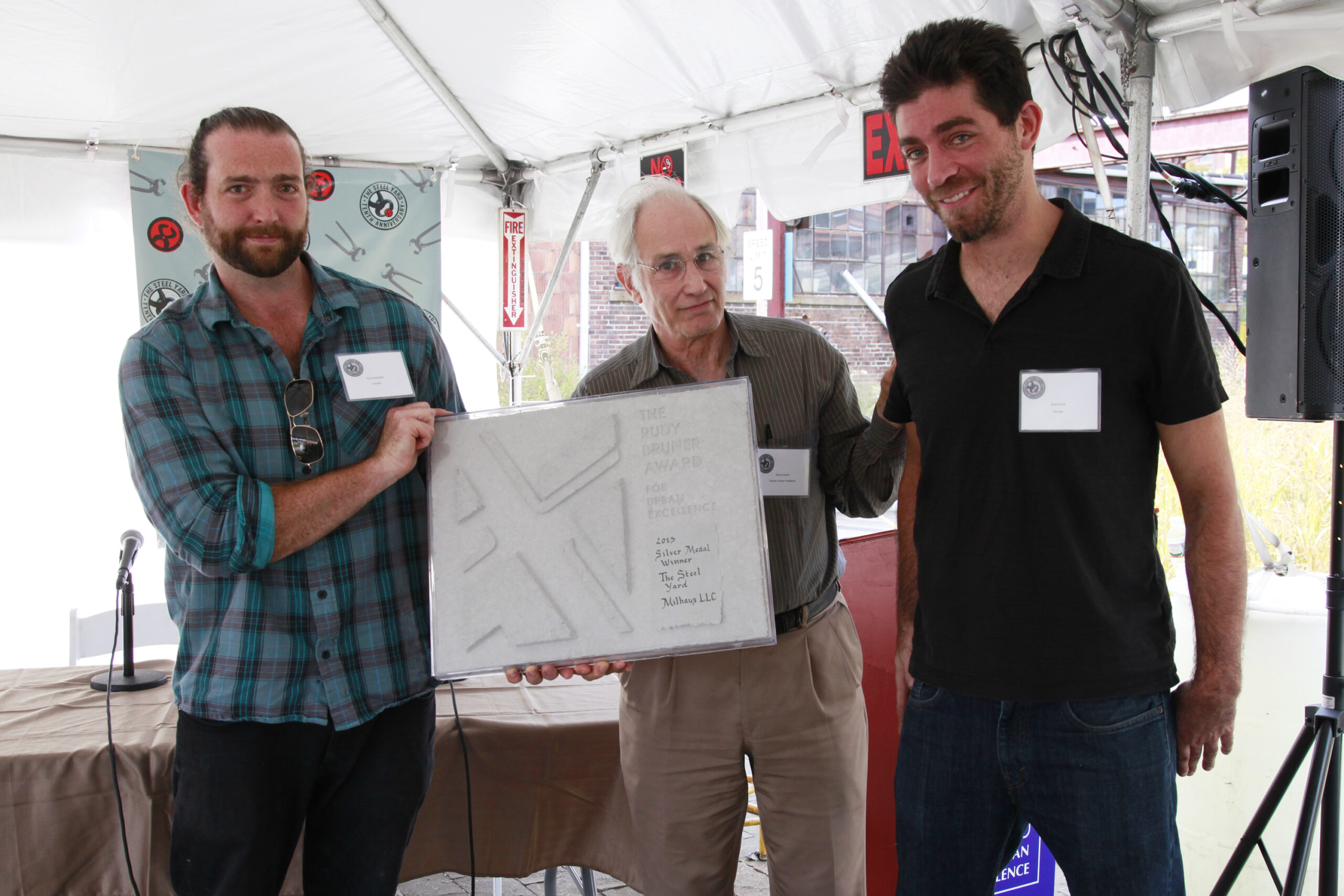 The role of artists as developers was showcased as staff, neighbors, and supporters of The Steel Yard gathered in the project’s courtyard on October 3 for remarks by Governor Lincoln Chafee and a panel discussion moderated by Metropolis editor in chief Susan Szenasy. Panelists including founders Clay Rockefeller and Nick Bauta, Lynn McCormack from the City of Providence, Frank Shea from Olneyville Housing Corporation, Kaki Martin from Klopfer Martin Design Group, artist Lee Corley, Craig Pickell from Bullard Abrasives, and Simeon discussed the project’s origins and its impact on its neighborhood as well as on Providence. 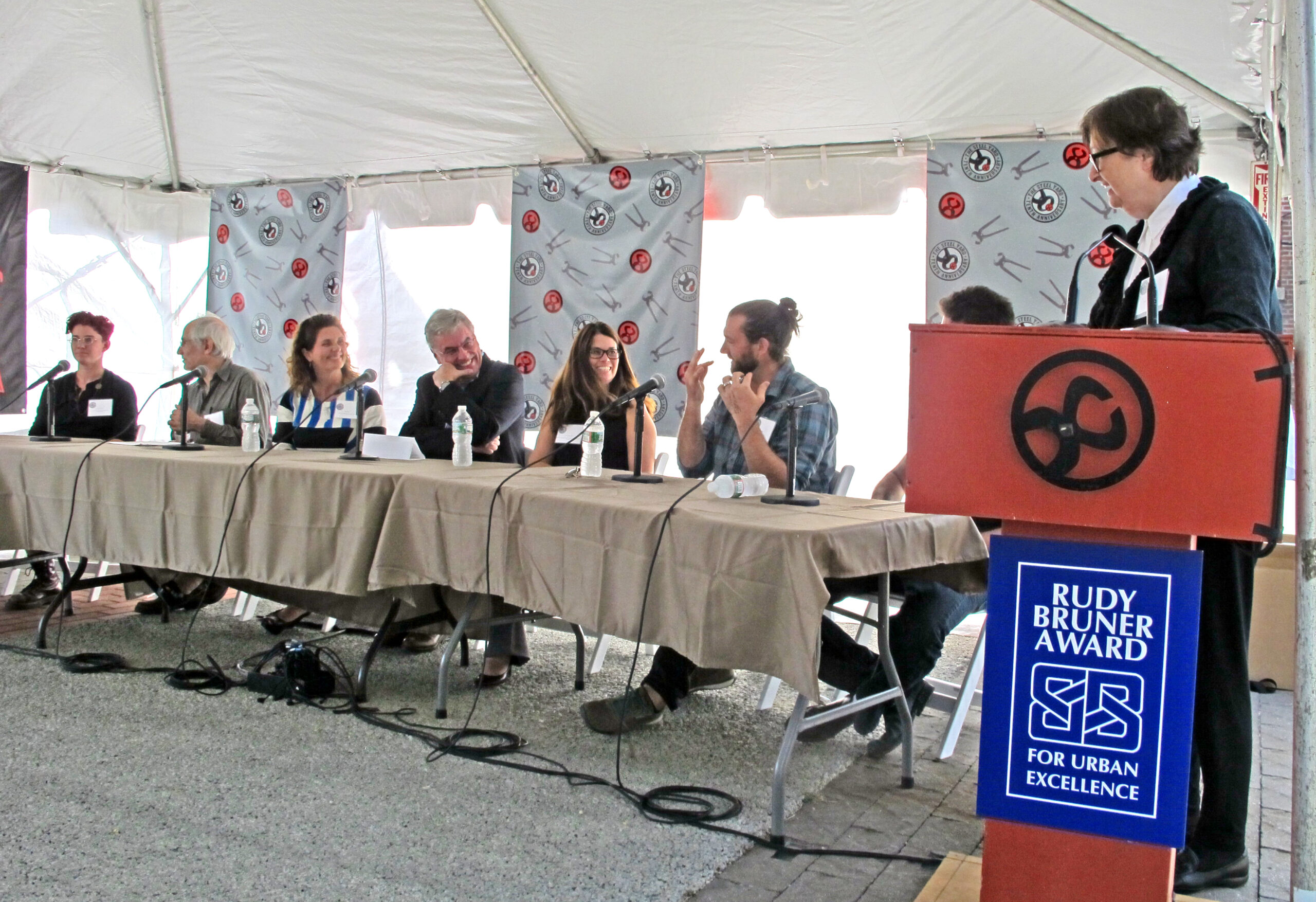 Reflecting on The Steel Yard’s success, Rockefeller acknowledged the value of taking a “slow growth” approach to development that permitted the project to evolve organically over time, allowing for learning by doing, taking risks, and not being “afraid of what you don’t know.” Through this approach as well as help from the community, the project generated a groundswell of support from local people and businesses as well as city hall. Martin noted that being open to risk taking provided freedom to experiment with the project’s design, such as pursuing an unusual “urban wild” approach to landscape and using permeable concrete, recycled steel, and locally fabricated materials. Summing up its impact, McCormack observed how The Steel Yard showcases Providence as the “Creative Capital”—a place where art and people with creative skills “can move an agenda” and rebuild a community. 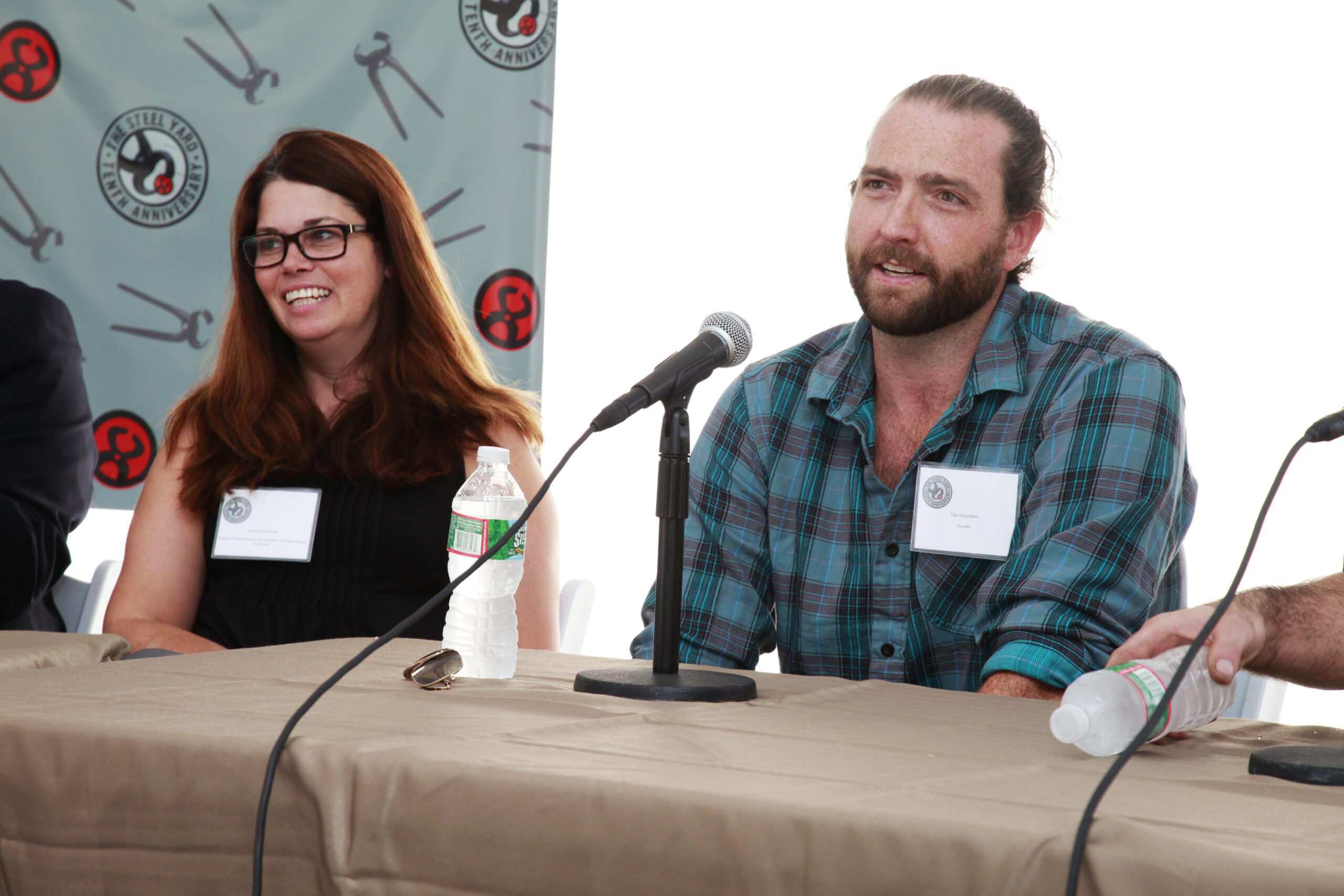 Clay Rockefeller discusses lessons learned from the development of The Steel Yard as Lynn McCormack looks on.

The spirit of community was also strong in Dallas on October 18. A presentation at the Dallas Center for Architecture kicked off a daylong celebration for the Congo Street Initiative. Benje Freehan from buildingcommunityWORKSKHOP, Michael Faenza from Metro Dallas Homeless Alliance, and Erin McFaye from The Bridge Homeless Assistance Center joined me for a discussion about how the project is changing perceptions about community development. We talked about the RBA as well as their award-winning projects’ impact on the city. All three participants underscored the value of receiving a national award that endorsed their work, which aided their missions of addressing vital issues such as homelessness, affordable housing, and sustainable development, thereby putting them on the city’s ongoing agenda.

That evening, homeowners and staff, alumni and volunteers from bcWORKSHOP gathered on Congo Street to celebrate. The group’s camaraderie reflected the collaboration that made the project possible as everyone enjoyed a Texas barbecue dinner, music, and dancing in the street. The energy and enthusiasm of bcWORKSHOP’s staff and alumni demonstrated the organization’s success in attracting emerging design professionals nationwide to work in their community-engaged practice. As darkness fell and fireworks from the nearby Texas State Fairgrounds lit up the sky, bcWORKSHOP founding director/president Brent Brown gathered everyone around the porch of the project’s Holding House for the award presentation and a group photograph to mark the occasion. 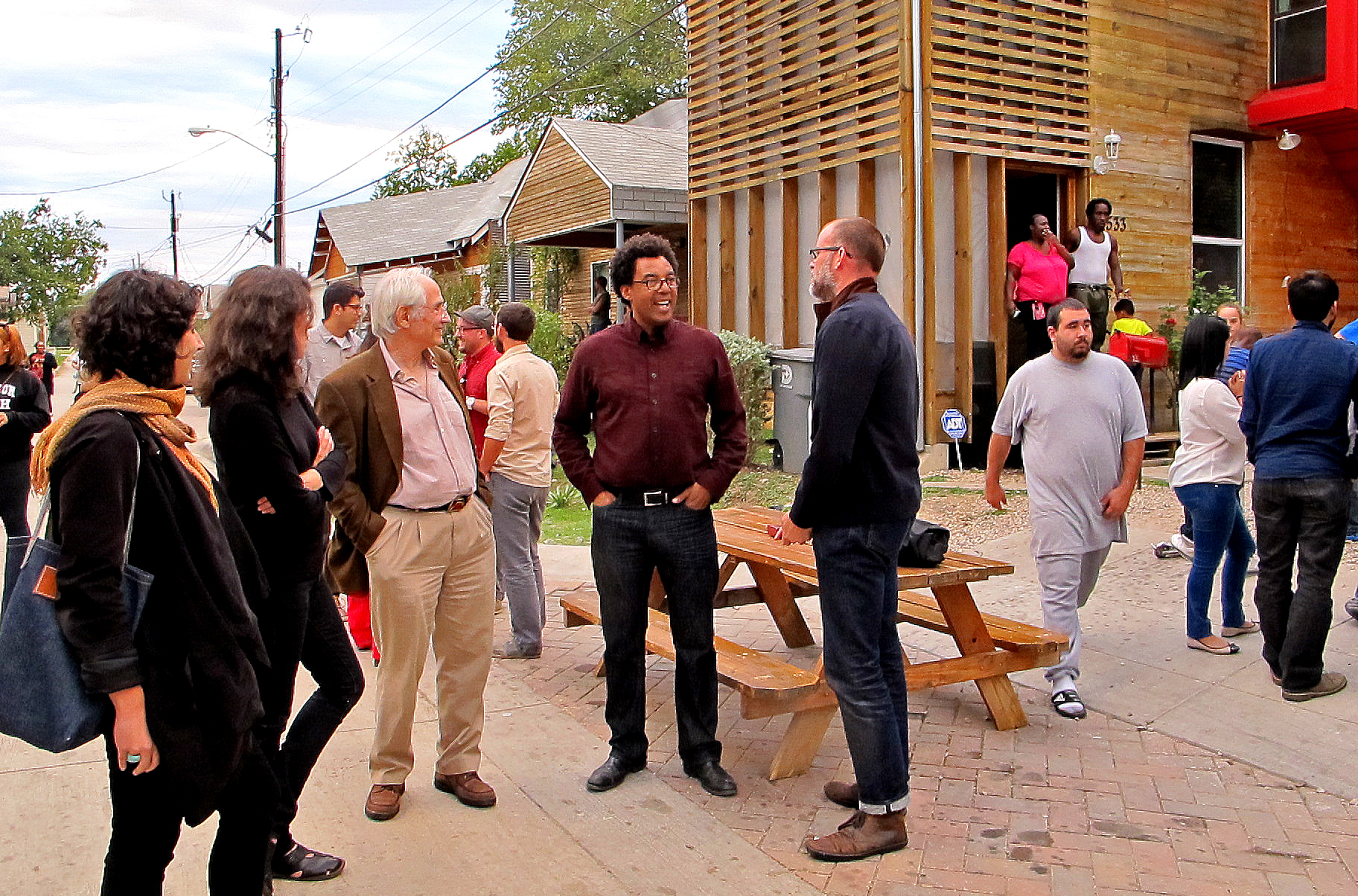 The celebrations in Providence and Dallas also marked milestone anniversaries for the projects’ sponsors; it was the tenth anniversary for The Steel Yard and the fifth anniversary of bcWORKSHOP. Each of these benchmarks provided an opportunity for those involved in the projects to reflect on what made their initiatives possible, the importance of working together, and the value of learning from the process. During The Steel Yard event, Simeon observed: “The best projects are those that look at what’s available locally and how those resources can be used in a creative way.” Clay concurred, asking us to “consider the DNA of the city and what makes it exciting.” 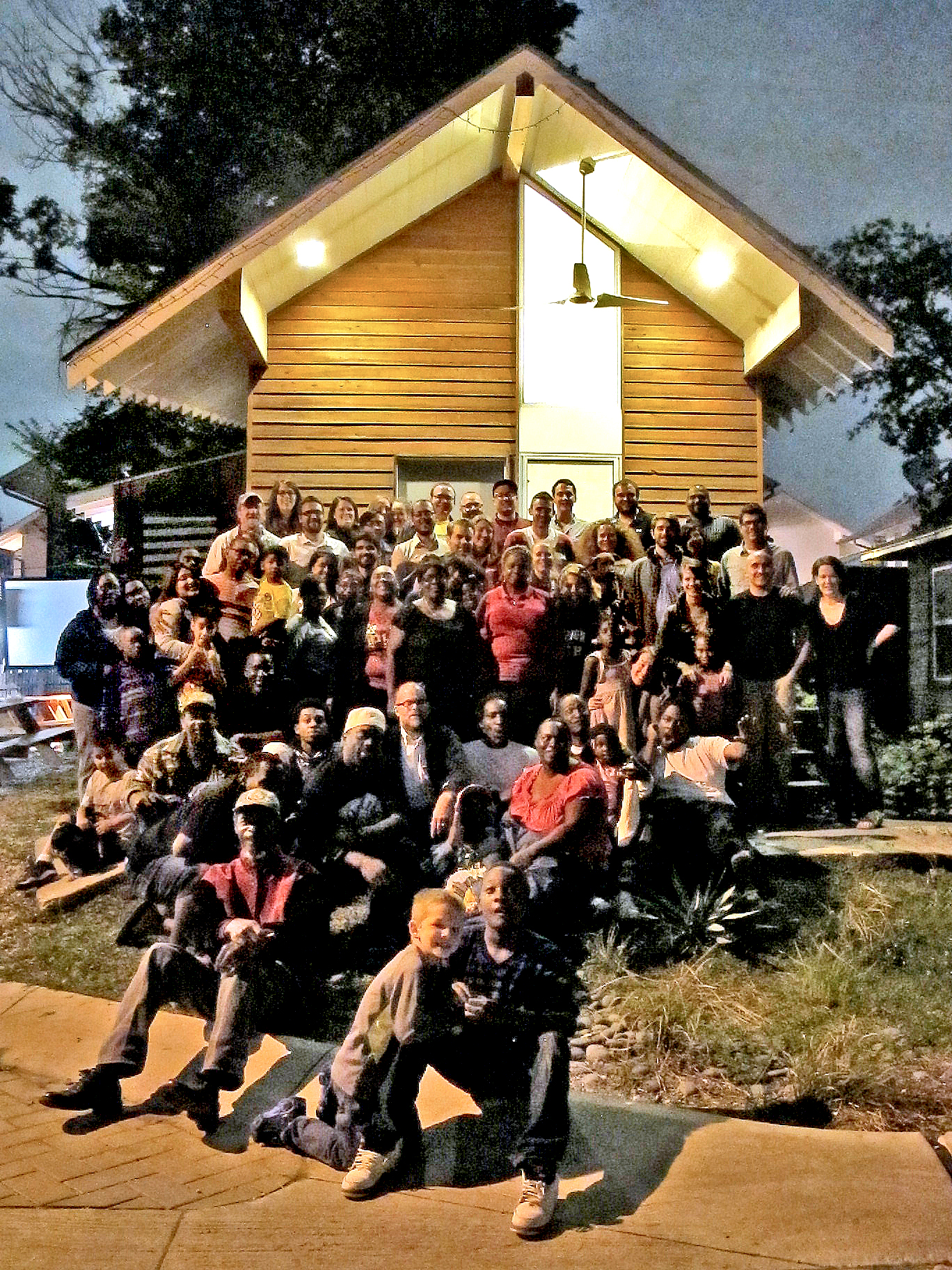 Congo Street residents and volunteers join buildingcommunityWORKSHOP staff and alumni for a group photo on the porch of the Holding House.

Currently, we’re busy wrapping up our 2013 RBA award ceremonies with events for Silver Medalists Via Verde in the Bronx and Louisville Waterfront Park in Kentucky, which I’ll report on in our next post. Later this month, I’ll discuss the 2013 RBA winners at a presentation on Creating Great Urban Places at ABX in Boston (November 21) and also during an AIA Housing Knowledge Community webinar on Advancing Conversation about Placemaking and Practice (November 25). Do join us for one or both of these sessions if you can. In the meantime, we invite you to give us your feedback and thoughts on Twitter: @RudyBrunerAward. We look forward to hearing from you!

This post is part of a series written and curated by RBA that focuses on placemaking in American cities. The blogs seek to advance the conversation on urban placemaking excellence, offering a detailed look at the 2013 award selection process and site visits, case studies from past award winners, and highlights from relevant conclaves, programs, and events such as the Bruner-Loeb Forum.