In both its form and function, the Southwest Fisheries Science Center is intimately tied to the water. 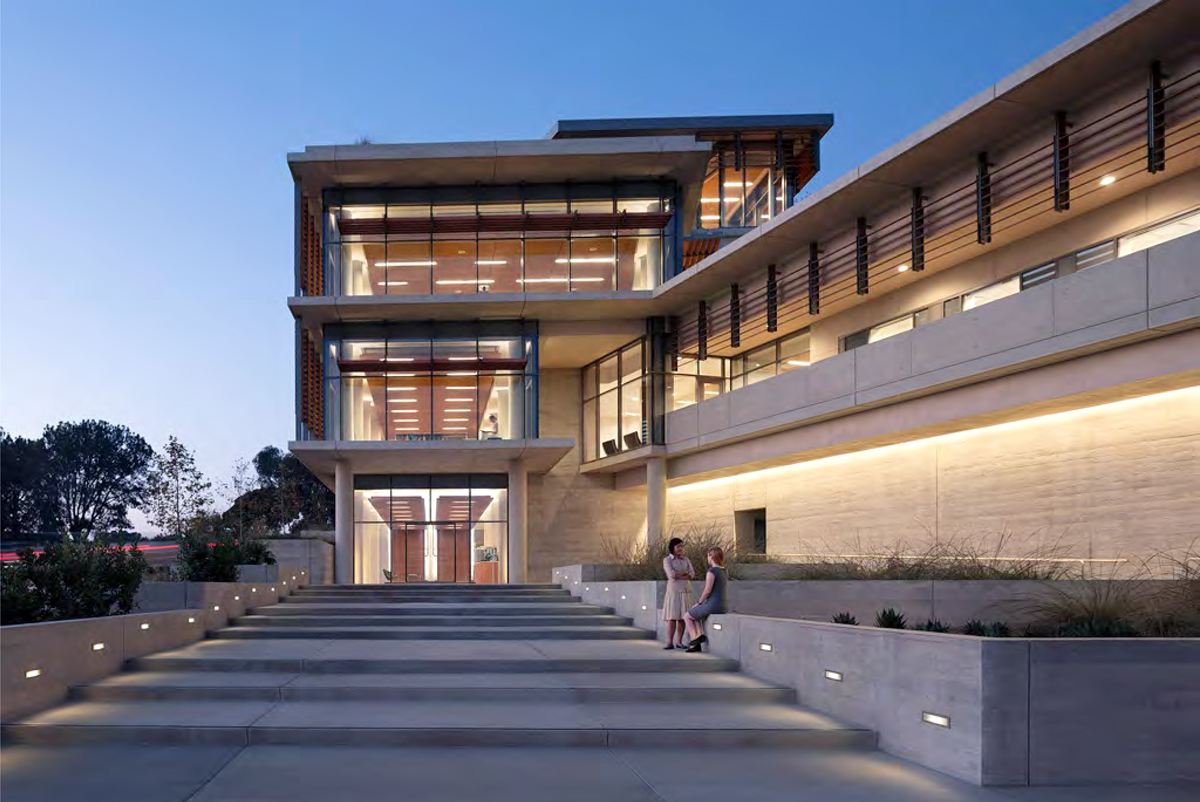 The main entry to the SWFSC reveals its full height. The 124,000-square-foot building is otherwise quite unobtrusive, blending into its hillside site.

If you are ever fortunate enough to find yourself off the rugged coast of La Jolla, California, you will see what appears to be a cross between landscape and building, twisting like the topography of the hillsides that emerge from the Pacific Ocean. This is the National Oceanic and Atmospheric Administration’s (NOAA) new Southwest Fisheries Science Center (SWFSC), designed by Gould Evans Architecture on the campus of UC San Diego’s Scripps Institution of Oceanography. It’s NOAA’s Pacific base for conducting research on ocean ecosystems, fisheries ecology, sea mammals, and turtles.

“It’s a once-in-a-career site,” says Robert Riccardi, lead designer on the project. “In fact, even though it’s finished, I still look for excuses to fly out for a visit!” From looking at the building, you might assume the architects are locals, but they are actually based in one of the farthest possible places from the ocean: Kansas City, Missouri. Nonetheless, they have done more than 120 facilities for NOAA, stretching back to the eighties.

The new SWFSC came about because the old 1960s facility, perched on an eroding bit of shoreline, is literally falling into the sea. As Riccardi tells it, the researchers didn’t want to leave their home and nobody in the surrounding area wanted a building that could ruin the view and destroy more of the natural landscape. There was no question that the old building had to be abandoned.

Representing different generations of thinking about landscapes, there is a sharp contrast between Gould Evans’s approach and the way the old center sat upon a flattened site as if it landed there from outer space. 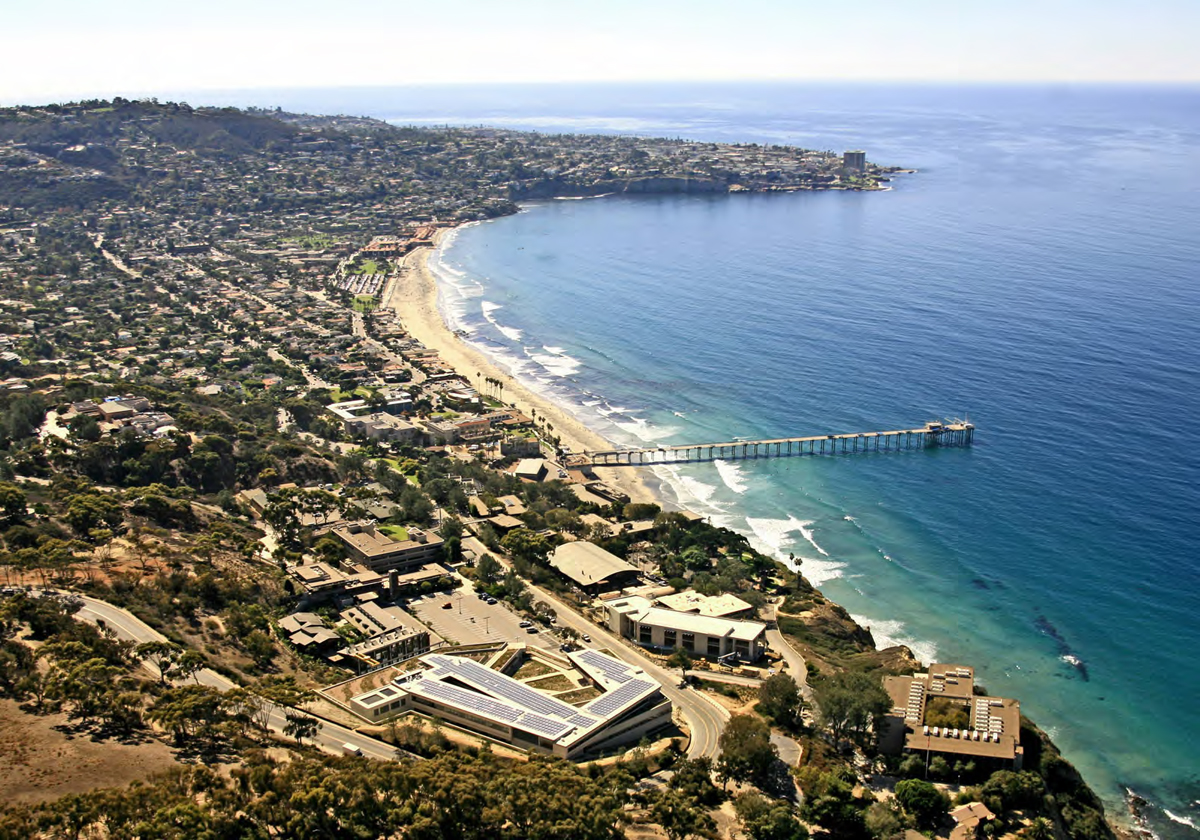 The new facility, perched at the edge of the ocean in La Jolla, California, replaces a 1960s laboratory whose foundation had eroded and consequently was sinking into the water.

One way to engage the site was to conceive the potentially massive building as a series of interrelated “villages.” Gould Evans created a sequence of stacked bars that are bent around a large courtyard and open out to embrace the center’s object of exploration—the sea. “We saw the site as the land-side terminus of the La Jolla Canyon, an underwater trench formation that reaches far out from the beach,” says Riccardi. “Nobody wanted to build up and then have this massive thing dominate the shore.”

The 100-foot drop in elevation on the site posed a challenge that the architects tackled by burrowing in as much as possible—15,000 truckloads’ worth of soil, it turns out. The result is a five-story building that has the low profile of a three-story one. It seems to slide out of the landscape like a series of drawers.

There are lots of things in the LEED Gold–certified SWFSC to geek out about, especially the world’s only 528,000-gallon acoustical testing tank for sonar technologies. About the size of a three-story building, this sophisticated piece of equipment is camouflaged in the landscape that was restored after all those dump trucks came and went.

When asked if they did anything to the building that went beyond what was required by NOAA, Riccardi says, “The federal government is very disciplined about projects like this, but I am proud that we were able to add, at no additional cost, a surfboard storage area in the basement for when the scientists want to hit the waves.” 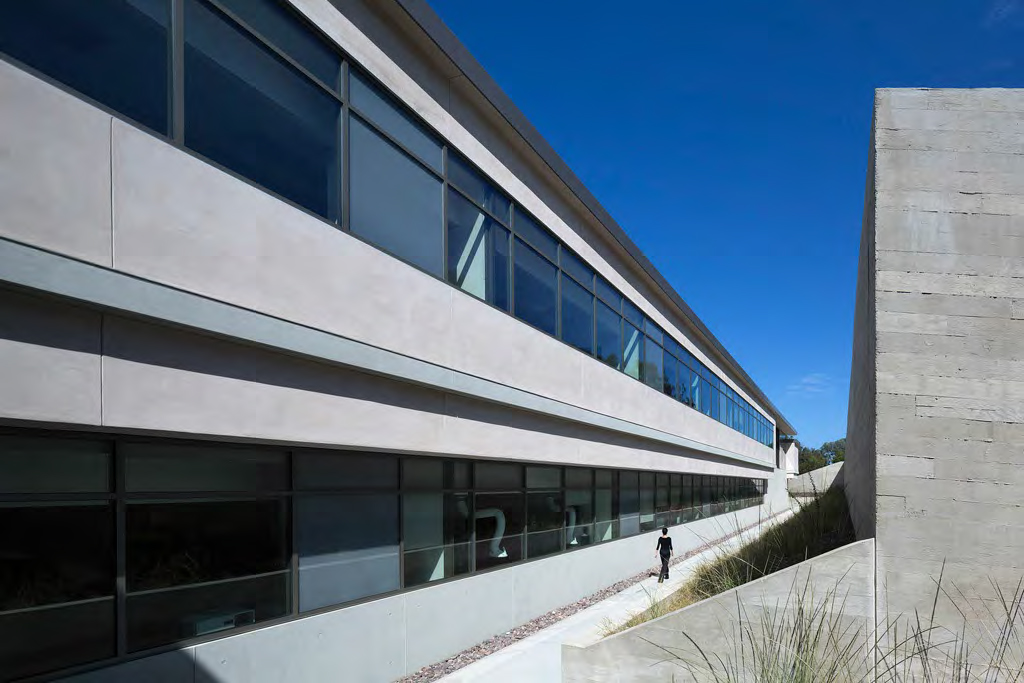 The architects removed 15,000 truckloads’ worth of dirt to lay the building’s foundation. The effect is that of making a five-story building have the profile of a three-story building. 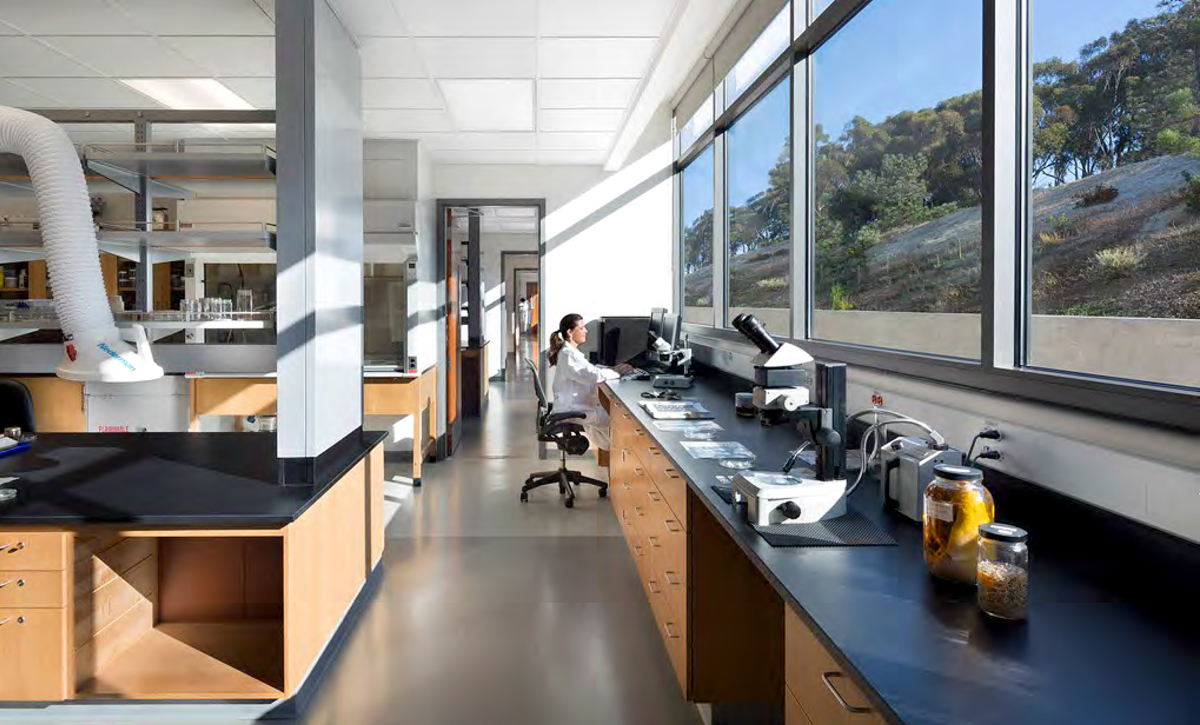 Laboratories usually consume about five times more energy per square foot than a typical office building. The SWFSC uses several strategies to address this, including natural ventilation, and narrow floorplates that allow the labs to be flooded with daylight. 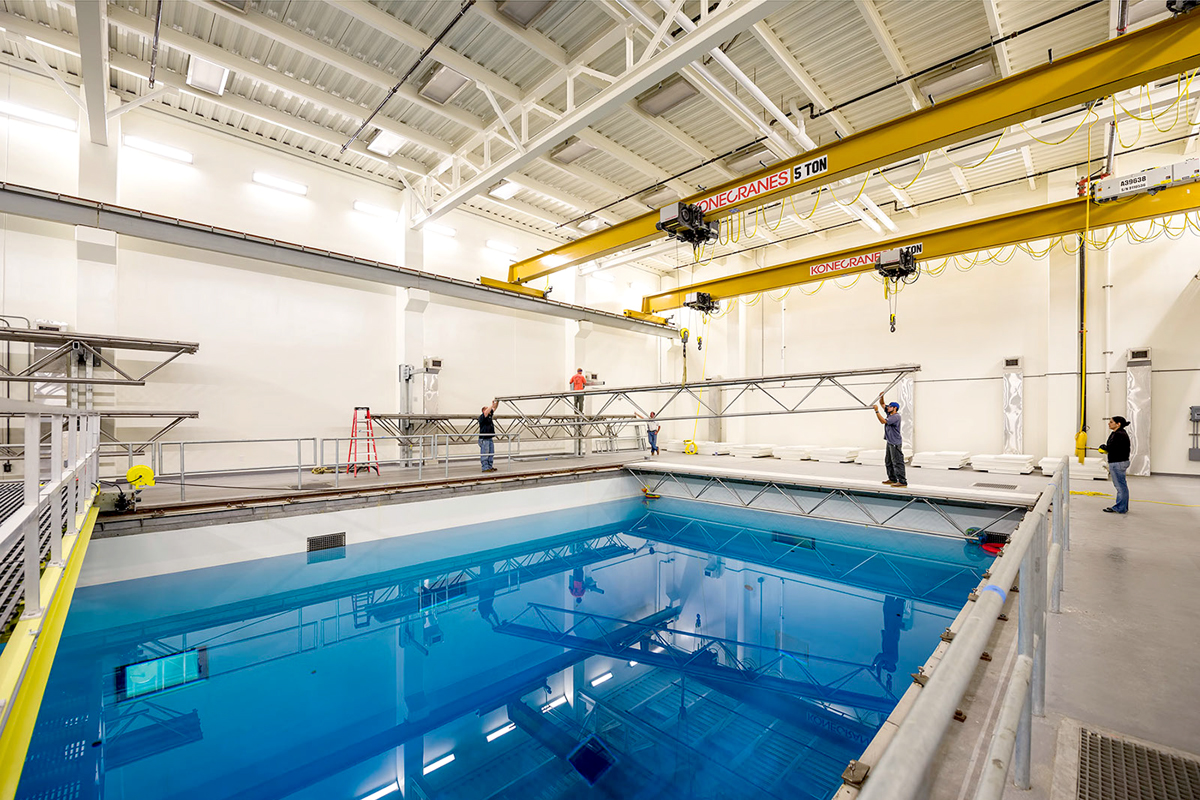