The LEED Platinum office building
in Masdar City, UAE, is the product
of a ruthless design process. 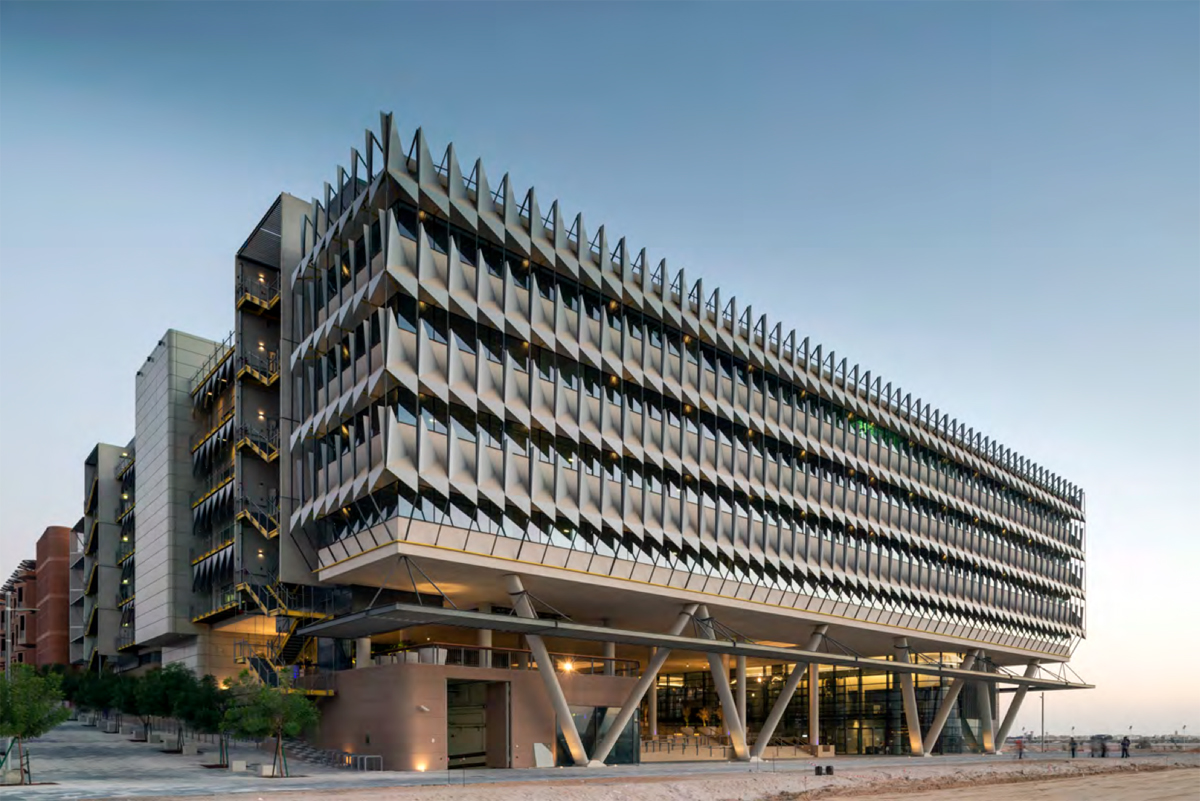 Not only is the new Siemens headquarters in line with the original super-sustainable goals of Masdar City, it also helps create a richer urban experience with a generous public plaza.

With its pale geometric fins, suspended spiral staircases, and long facades, Siemens’s new Middle East headquarters in Masdar City is an ode to the architecture of efficiency. It is also a sign that Masdar, billed as the world’s first carbon neutral city in 2006, might finally be becoming more than just a visionary idea.

Originally conceived by Foster + Partners to stand on a podium above a network of driverless cars, Masdar had to revise its plans after the financial crash of 2008. Post recession, the city has dropped its zero carbon and waste taglines, and is a leaner and more pragmatic beast. Siemens’s building, designed by U.K. architects Sheppard Robson, is the first LEED Platinum–certified office building in the emirate. An eloquent expression of Masdar’s pared-down but pioneering ambitions, the structure offers an impressive 46 percent in energy savings (as per the Ashrae benchmark), a 50 percent reduction in water demand, and a 65 percent reduction in energy demand—all for the cost of a high-quality office building in Abu Dhabi.

The architects’ approach was inspired by evolutionary processes in nature. “If you look at animals, they are very highly tuned to their environment but they do it in a way that has no waste,” explains David Ardill, a partner at Sheppard Robson and lead architect on the project. “Efficiency became the fundamental baseline.” Parametric analysis allowed the designers to find the best-performing solutions to such vital questions as what the best u-values for the brief were, how the floorplates should be laid out, the best orientation of the building, and the ideal ratio of windows to wall. 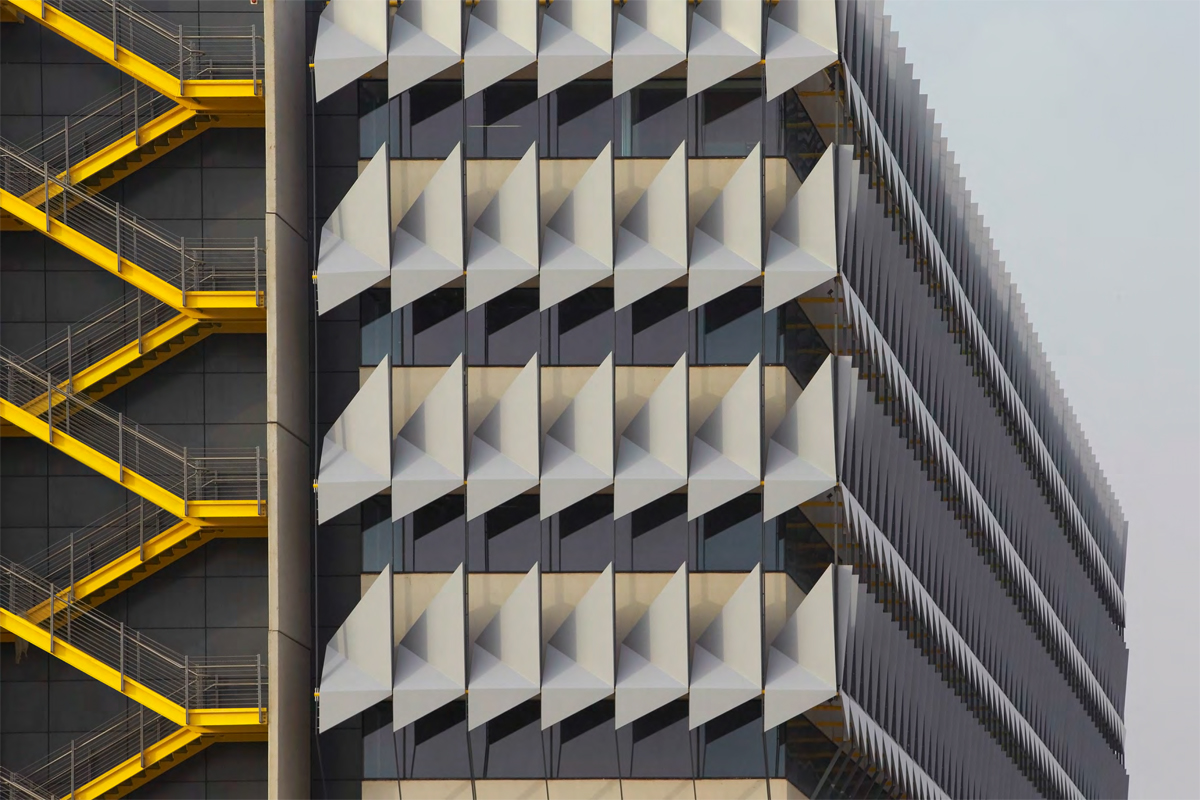 The facade of four-millimeter-thick aluminum fins is tailored to the solar orientation. The shading on the inside shifts with the movement of the sun.

In practice this meant that of 144 different floorplates analyzed, the architects picked the best for even distribution of daylight, flexibility (the building can be reconfigured to hold up to 32 tenants), and optimal wall-to-floor ratios. The post-tensioned flat slabs used something called void-forming technology—the addition of polystyrene blocks reduced the concrete by 60 percent. Each 48,400-square-foot floorplate was punctured by nine atria and serviced by six cores. This allowed the floorplates to be column free and achieve a staggering 92 percent in efficiency in terms of usable area. “The best we have got in the U.K. is about 86 percent; the best I have seen in the Middle East is 83 percent,” says Ardill, with evident pride. Because the architects had saved money by using materials smartly, they were able to add a public plaza under the building. “Foster’s master plan didn’t allow for a public space, and it wasn’t budgeted for either,” explains Ardill. “We made the building so efficient that we gave the city back a public space for free.” 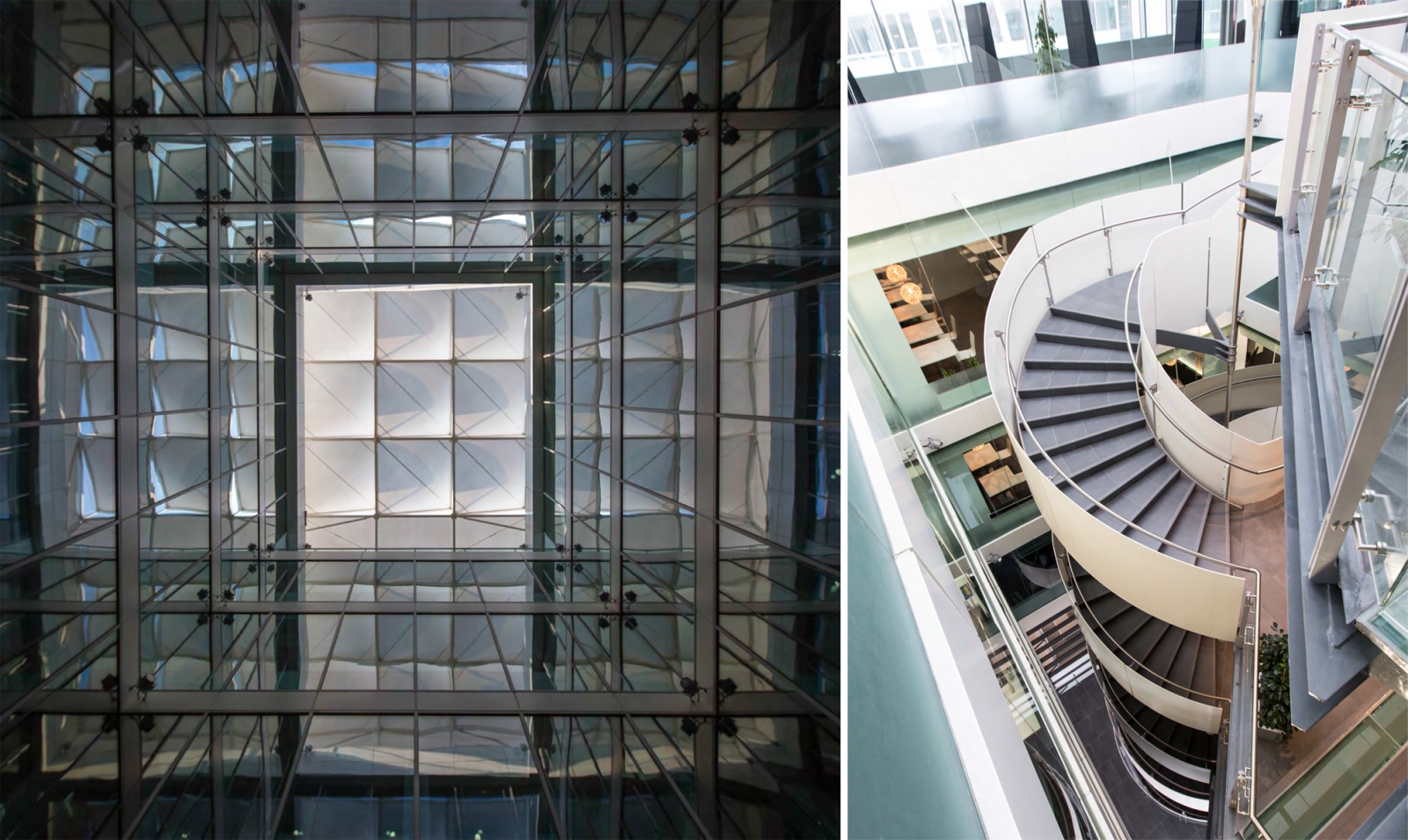 Perhaps the most visible, and emblematic, expression of this project is the framed shading system of ultra lightweight four-millimeter-thick aluminum fins that hangs off the building’s facades and works in tandem with a performance coating on the glass. The software’s optimized solution, to maximize daylight but minimize solar gain, gave a different design to every facade. Ardill felt that making the design any more complicated would be counter to the building’s core philosophy. “Variation is waste, so we couldn’t put it in,” he says. “What’s more, this was the answer to the question we asked; we couldn’t cheat to make it more elaborate.” This inexorable rationale makes the new Siemens HQ exciting and groundbreaking. It expresses its sustainability through leanness and functionality—in every facade detail, window, and joint.