Thanks to an enriching sideline, SOFTlab started its career with highly conceptual commissions. 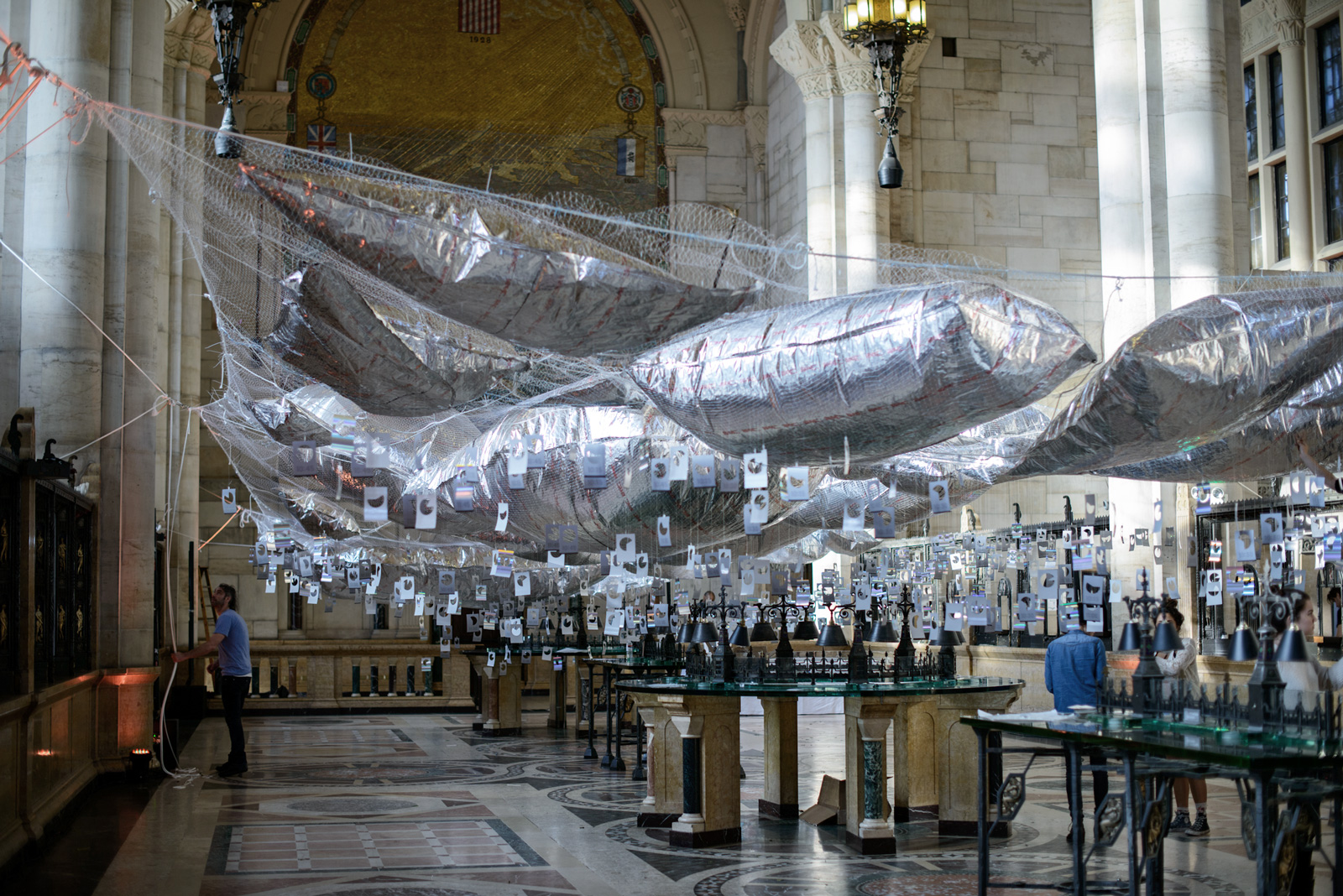 When the crowd at this fall’s benefit for the Architectural League of New York entered the ornate art deco lobby of the Williamsburgh Savings Bank tower in Brooklyn, they were confronted with an unusual spectacle. From a canopy of inflated plastic-and-Mylar cushions 14 feet in the air dangled hundreds of wires, each ending in a small swatch of reflective paper. The mass of tags created a shimmering cloud under which (and sometimes into which) partygoers wandered, drinks in hand.

Plucking any one of the cards from its wire, the guest discovered that the back sported a clock face showing a particular time: these were tickets, and at the specified hour the visitor was to present them to a uniformed guard in the building’s basement to gain access to a special party-within-the-party. There, in the eerie half-light of the defunct bank’s erstwhile vault, attendees took in a specially commissioned sound installation while lounging on a massive, newspaper-thatched settee.

The idea—canopy, tags, and all—was the work of a young, polymath Manhattan design office called SOFTlab, founded by Michael Szivos, a 35-year-old native of Baton Rouge, Louisiana, who started the practice shortly after taking his MS in advanced architectural design at Columbia University in 2004. With a growing reputation for vigor and ingenuity, the firm had to draw on both qualities to pull off the Architectural League commission. “We made the whole thing happen in about three weeks,” says Szivos, who partnered with the sound designer David Rife on the belowground grotto.

In addition to the firm’s can-do ethic, the bank bash also highlighted something of SOFTlab’s conceptual and aesthetic preoccupations. In a 2010 exhibition design for Brooklyn’s Pratt Institute, student presentations were displayed in a lattice of hyperboloid nets; a decorative “gateway” for New York City’s Feast of San Gennaro festival in 2011 featured countless colorful panels held in suspension by a system of cables, making a giant funnel in midair. Again and again, SOFTlab’s designs spring from a certain fascination with the theory of emergence—the appearance of form out of a vast series of particulate bits and bobs. 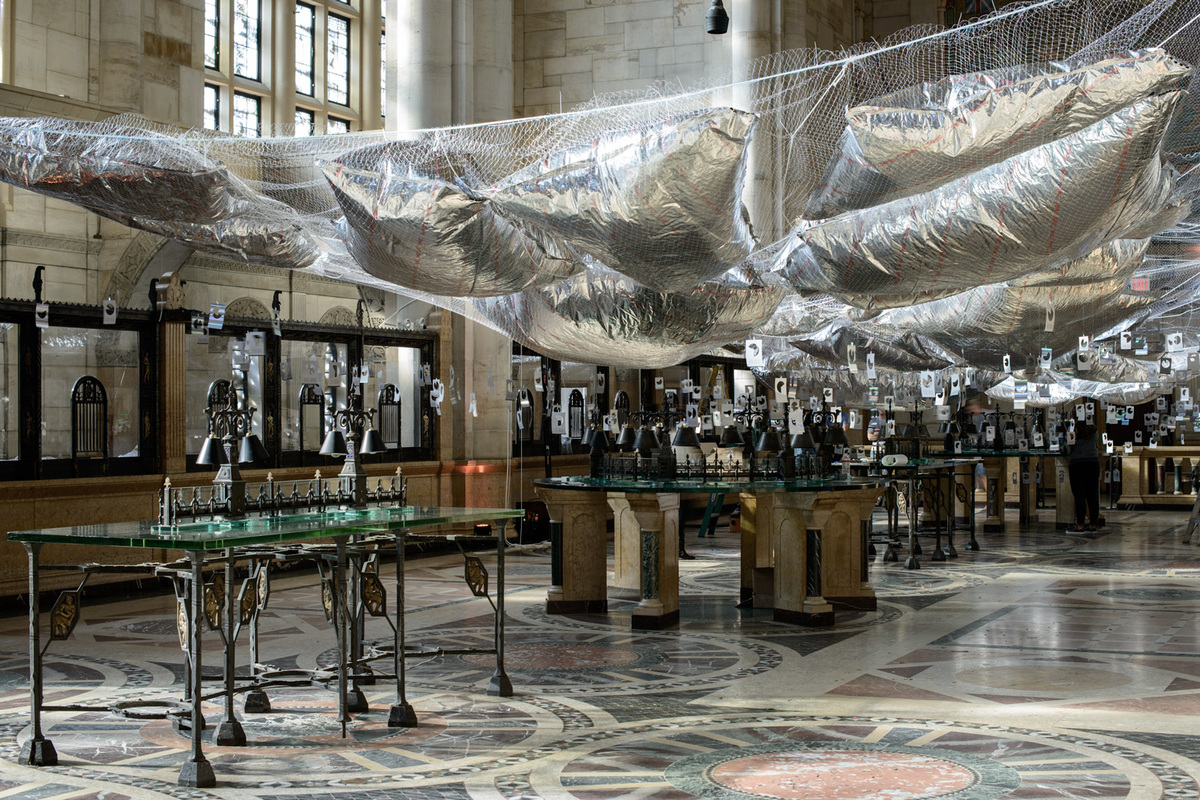 The team’s enthusiasm for complex emergent systems is more about spirited invention than computer-driven niftiness. “We’re not interested in generative design, in the sense of ‘hit a button and the computer spits out a design,’” Szivos says. SOFTlab relies on computers to help engineer its elaborate displays, but the designers put software at the service of open-ended experiments—refusing, as the designer says, to be “limited by our infatuation with digital techniques.” Adds Szivos, smiling mischievously, “The computer is a very dumb thing.”

Experimentation for its own sake has always been the priority at SOFTlab. Most new firms, Szivos notes, follow a fairly common progression, one that his has flipped on its head. “Typically you might do a kitchen or a small project, then you slowly build out,” he says. “But we sort of got started right away doing experimental work.” The prime reason the office has been able to indulge its taste for structural innovation is due to a highly remunerative sideline: SOFTlab has a thriving parallel business as a Web-design outfit. “It’s better than a lot of our [peers], who can’t count on a $15,000 Web site commission between projects,” says Szivos. With the Web work keeping the lights on, SOFTlab has been able to ease itself into the architectural marketplace, moving from low-budget installations to more substantial built work.

That, Szivos claims, has always been the objective. “The brief history of the firm is that we were doing Web stuff,” he explains, “yet we always talked about doing these other things.” The firm’s online projects have never been outright distractions, but Szivos is pretty frank in distinguishing between SOFTlab’s “boring” work and “interesting” projects. The firm’s October exhibition design for the New York Hall of Science was the latter; a massive digitally prefabricated modular system whose installation has proven a huge—albeit hugely rewarding—challenge.

Needless to say, making everything interesting won’t always be easy. The firm’s biggest challenge will be suturing together its practical and experimental impulses, and Szivos knows it. He gestures at a cardboard assemblage hanging from the ceiling. “If I told someone I wanted a kitchen to look like that,” he says, “they’d say it’s impossible.” 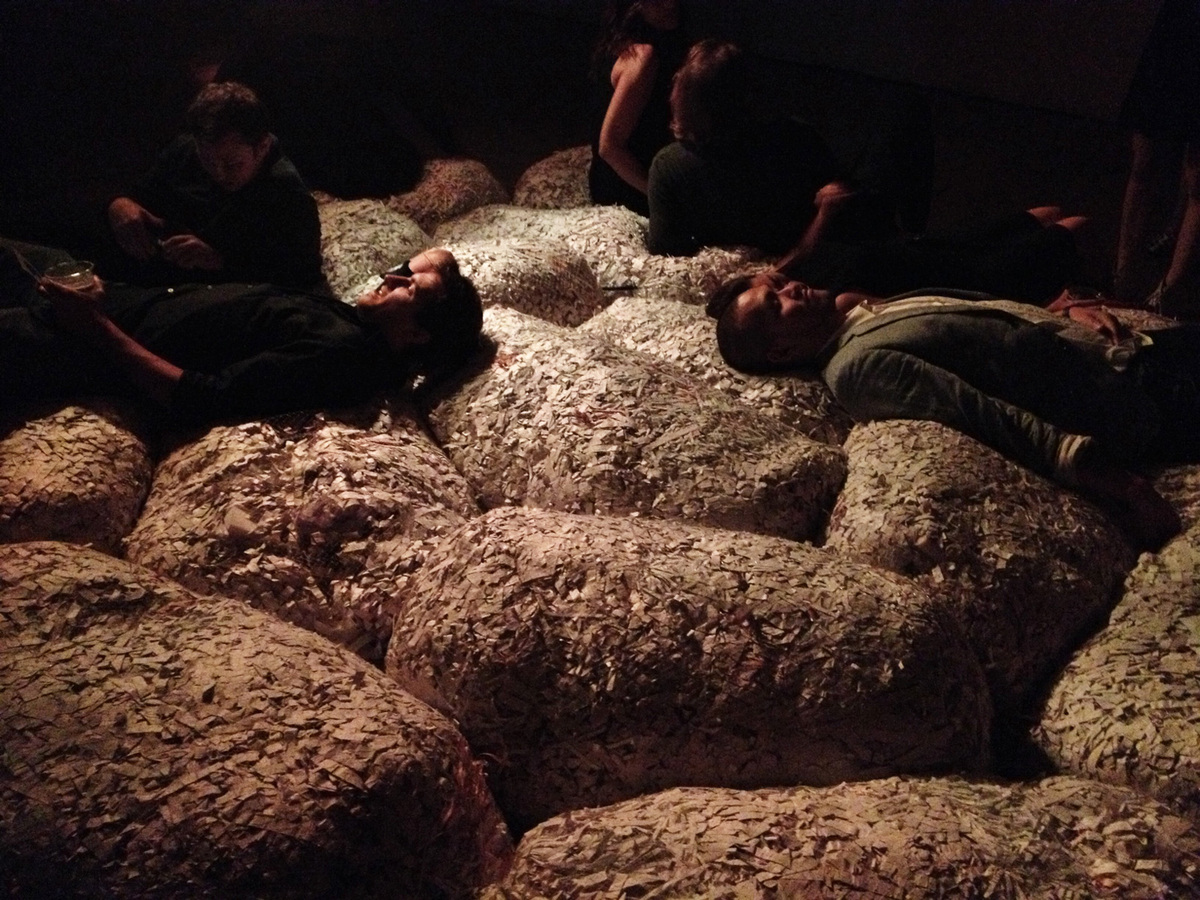