Explore the impressive EUR Convention Center, designed by Massimiliano and Doriana Fuksas nineteen years ago, with our first ever 360 video tour.

Despite its evocatively fluffy name, “The Cloud” (Nuvola in Italian) has been one of the most seriously discussed and debated architectural projects in Italy in the last decade. Even after its opening in October 2016, the building continues to generate controversy over its cost (an estimated €353 million, or $390 million) and the delays its construction incurred.

The EUR Convention Center, as it’s officially known, is the largest new building to be built in Rome in more than 50 years—a flicker in time for the Eternal City, perhaps, but not an inconsiderable span either. The design was hatched by Massimiliano and Doriana Fuksas in 1998, but it languished on the drawing boards for nearly two decades after that. In that time the city elected five different mayors and had three temporary commissioners. It also weathered a number of corruption scandals.

Meanwhile, the EUR remains as pristine as ever. The neighborhood, constructed in the late ’30s to host the planned (but canceled) 1942 World’s Fair, is home to buildings by some of the greatest Italian architects of the 20th century, including Adalberto Libera and Marcello Piacentini. It is here that you can find the Pigorini Ethnographic Museum, the Colosseo Quadrato (Square Colosseum)—today Fendi’s headquarters—and a number of public agencies and private companies. The orthogonal streets and the ruthlessly geometric buildings with their double-height porticoes create a landscape of alternating voids and masses, light and shadows.

The Cloud reinterprets these characters, proportions, and simple geometries—but using glass and steel instead of the ubiquitous marble and masonry. The complex sits on the southern edge of the EUR, on the former site of an abandoned parking lot that Federico Fellini used as a movie set in the ’60s. The massive convention center comprises three main architectural elements: a glass box known as the Theca, measuring 230 feet by 570 feet; the Cloud istelf, a steel-and-fiberglass structure inside the Theca; and the Blade, a narrow jet-black prism (and soon-to-be hotel) that runs along the south side of the glass box. 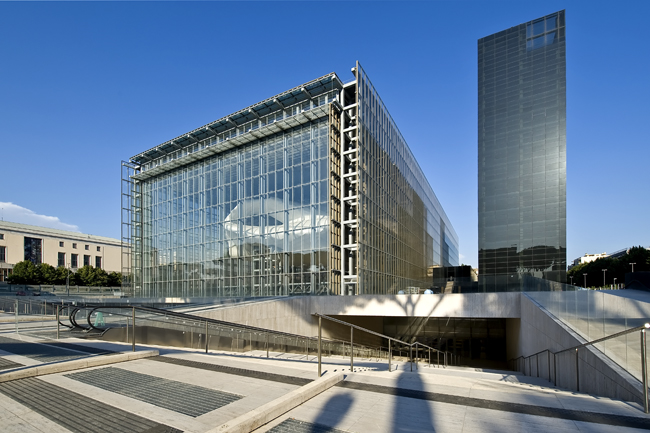 The northwest approach to the building on Via Cristoforo Colombo is utterly spectacular and illustrates one of the building’s greatest strengths—its grasp of the architectural promenade. A set of travertine stairs drop down below the street level and empty into the entrance hall, a 48-meter-tall open space flooded with light. The ghostly structure of the shape-defying titular Cloud, covered with translucent fiberglass panels, looms overhead.

From the entrance hall visitors can reach the two main functional spaces of the Theca. The first spans almost the entire floor plan of the building. This completely black, hangarlike room, made more inviting by its wooden floors, has space for up to 6,000 and can be subdivided to accommodate smaller groups. 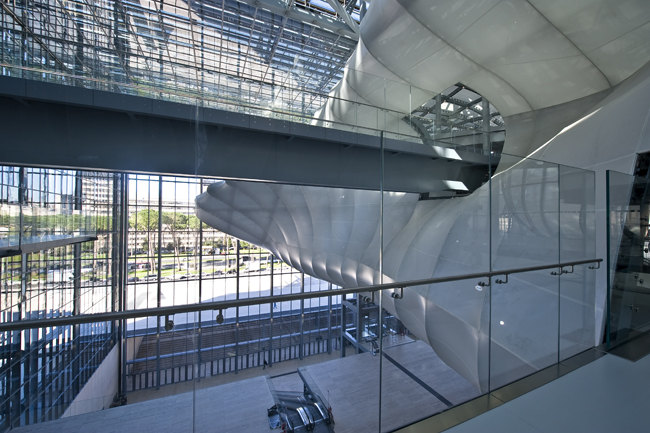 A second route, takes visitors up to the Cloud itself. Starting from the entrance hall, two steep escalators lead to a mezzanine level; a smaller escalator up ahead disappears into the Cloud, like the ramp of an old Hollywood spaceship. Once inside, the riblike supports of the structure—previously only glimpsed through the Cloud’s milky skin—are finally exposed; walking through it is like being inside the belly of a large beast. A set of black doors lead to the main auditorium, entirely clad with American cherry wood panels. The architects use these varied materials—stony travertine, shimmering glass, glowing fiberglass, warm woods—in very direct (perhaps even blunt) ways to distinguish the zones within the building. 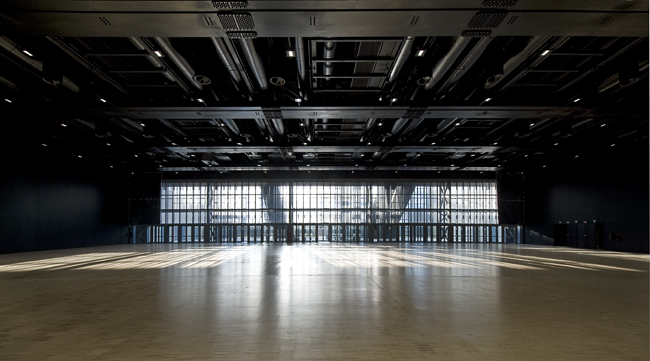 The Fuksases based the entire concept of the project on the dichotomy between free and more regimented forms. “The problem,” Massimiliano says, “was to solve the confrontation between a shape that is completely free like a sculpture [the Cloud] and its more regular envelope [the glass box].” This challenge is not new—precomputer architects worked hard to reconcile the rectilinear with the free-form—but here it takes on an urban analogue. According to Massimiliano, the convention center reunites the spirits of different architectural Romes, from the baroque to the modern. “The building has two sets of inspirations: the rigid geometry of the EUR on one side and then the baroque Rome, the organic Rome, the Rome of Borromini. I wanted to put all these Romes close together and see what happens.” 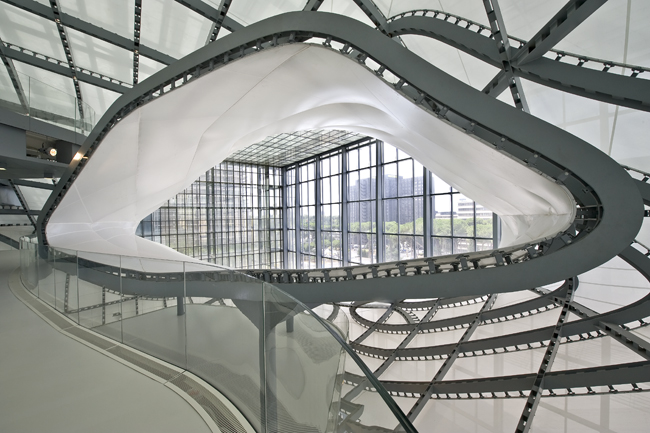 Critics say that the complex was unnecessary—another similar venue, designed by Libera, stands just a few hundred feet away—and simply cost too much. Studio Fuksas claims the final price was below initial estimates, and the public company that owns and manages the center said it expects to generate  €300 million to €400 million a year through congresses, events, and tourism. Yet no hotel developer has shown an interest in taking up residence in the Blade, and legitimate doubts have arisen as to whether the center will deliver the numbers of visitors it promises. Architecturally, there is a problem, too: The building was conceptualized almost 20 years ago, and it responds to needs that might have been appropriate at the time but are less so today. (Massimiliano Fuksas, for his part, takes pride in having kept the original design unchanged.)

Even so, it must be said that this is quite an impressive modern building, one that brings a touch of the contemporary baroque to Rome’s iconically rationalist EUR neighborhood. What’s more, it is in a way a perfect metaphor for Rome today: beautiful, contradictory, a bit messy. It’s a bold reflection of the city itself. 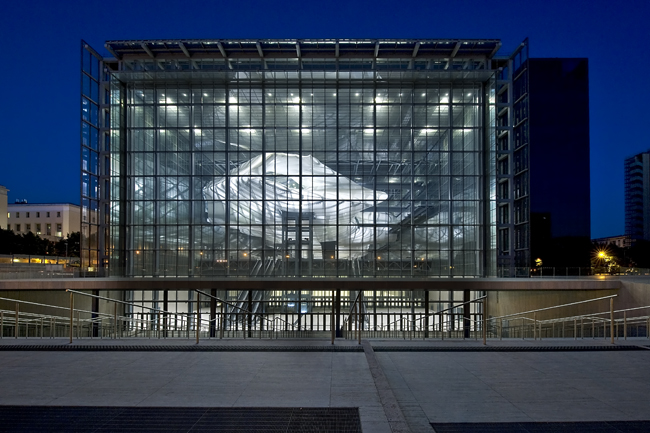 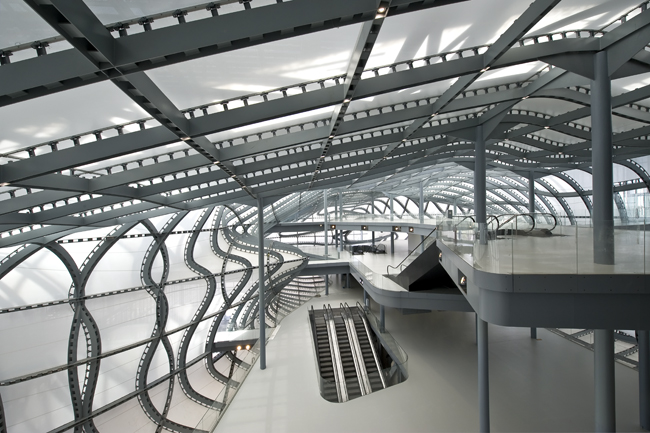 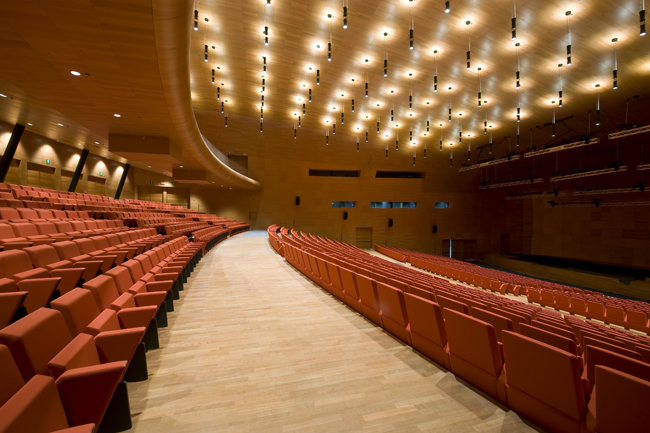 The main auditorium inside the Cloud. 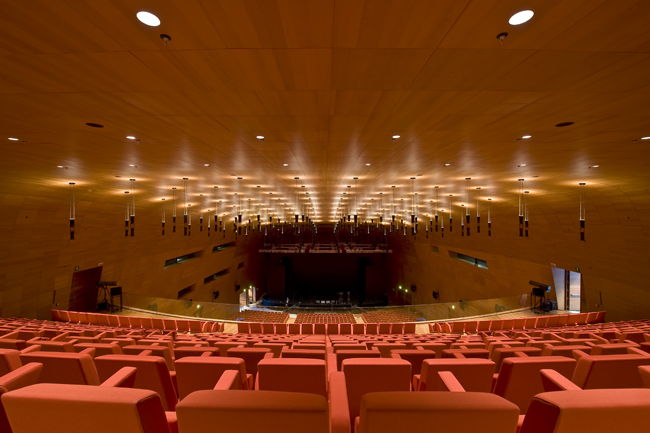 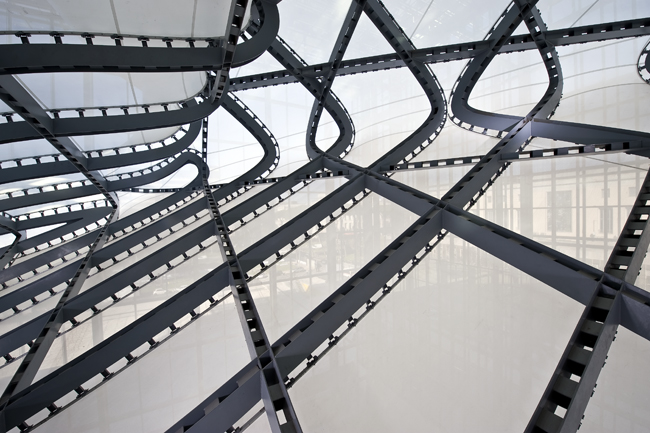 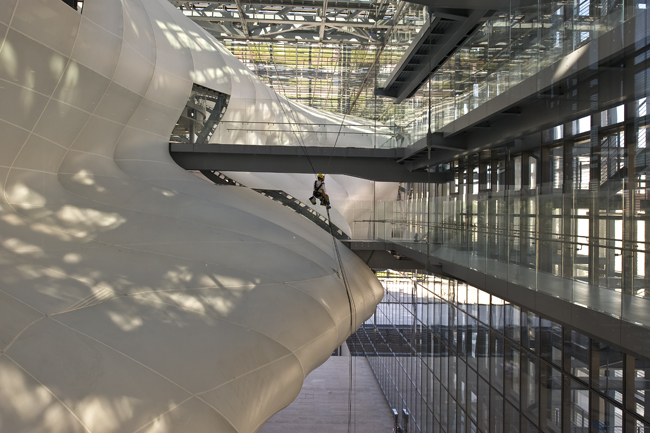 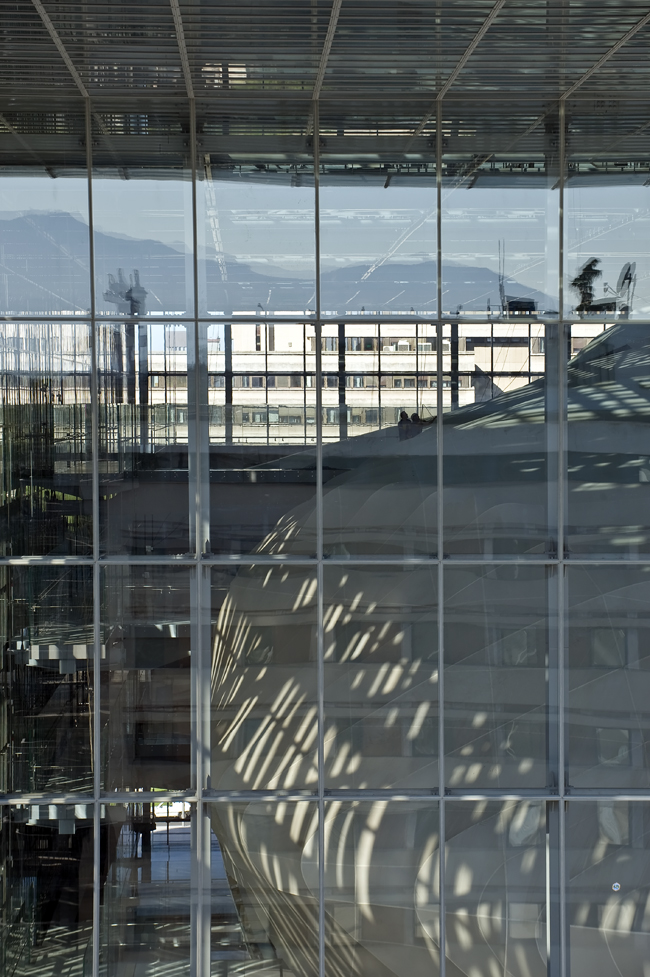 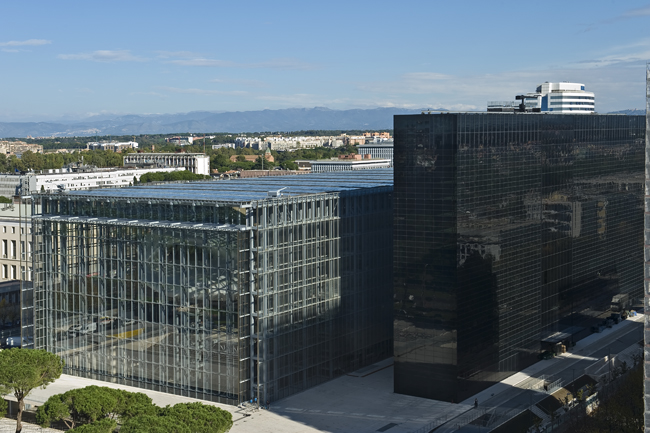 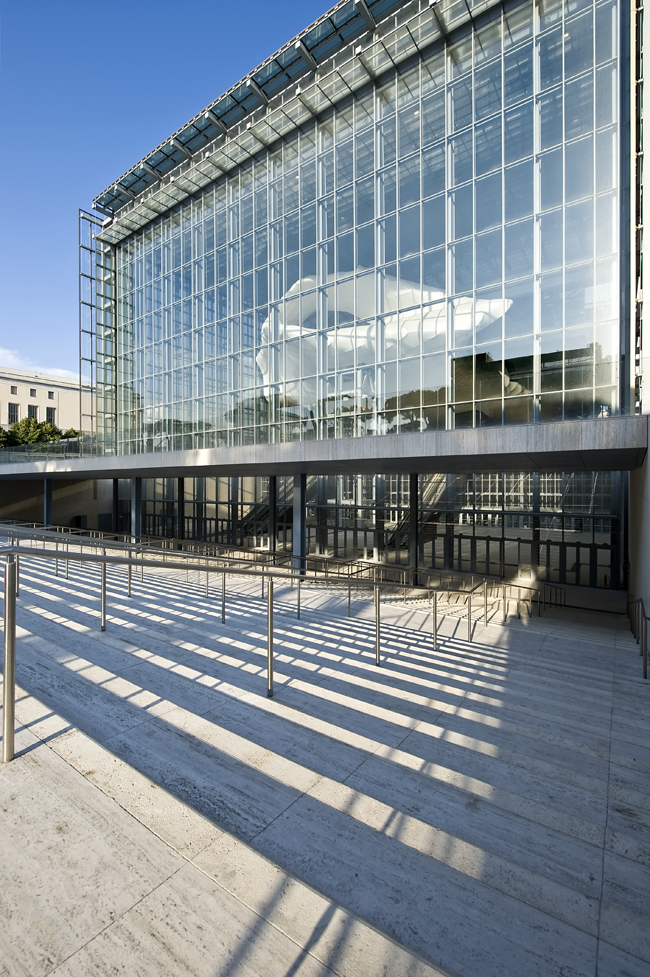