Suzanne Tick’s Luum Is a Fresh Force in U.S. Textiles

The newest entrant into the American contract textiles industry, Luum is based on artisanal approaches, material exploration, and a keen sense of how commercial spaces are evolving. 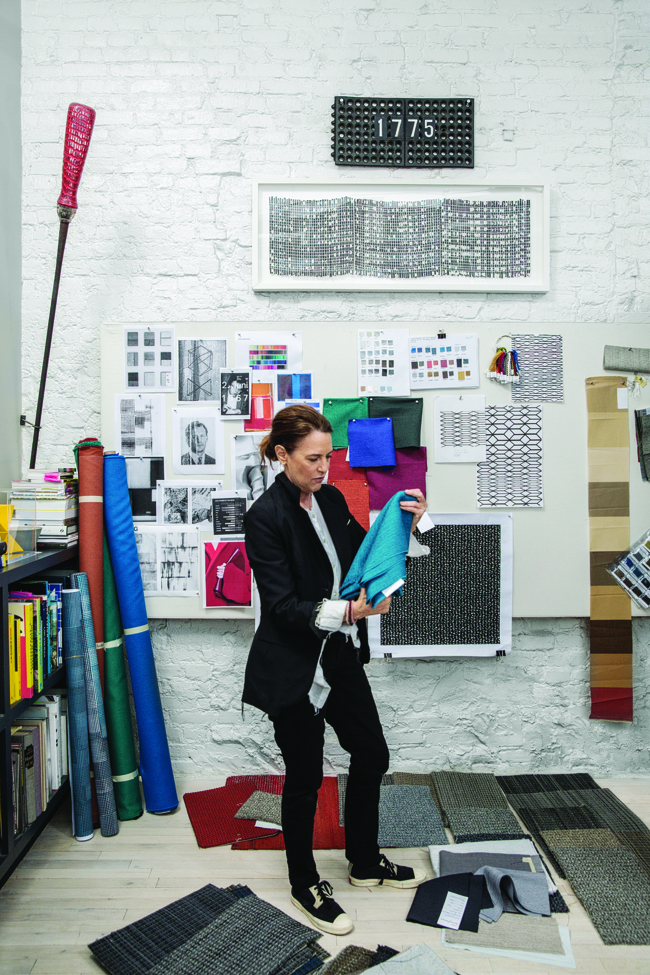 Textile designer Suzanne Tick examines one of her fabrics for Luum, which unveils its inaugural collection this year at NeoCon.

Teknion Textiles had a branding problem. The three-year-old business had a catalog of more than 60 fabrics, but potential customers perceived it as an arm of Teknion Furniture, its Toronto–based parent company, rather than as a textile supplier for any surface, whether it came from Teknion or not. “If someone saw the Teknion Textiles binder out in a showroom, they’d put it back over by the Teknion Furniture binders,” says Dave White, Teknion Textiles’ general manager. The brand didn’t have a stand-alone identity—a major stumbling block for a company aiming to edge out industry competition from the likes of Carnegie, Designtex, Knoll Textiles, and Maharam.

But that’s about to change. Teknion Textiles is relaunching at NeoCon this month as Luum, whose name references where each of its products gets its start: on a loom in the East Village studio of weaver Suzanne Tick, in New York. A fiber artist and former consultant to Knoll Textiles, Tick has been the driving force behind the brand’s distinctive aesthetic, deliberate design process, and extensive color palette. The fabrics’ artisanal starting point sets Luum apart, Tick says, as does its disavowal of decorative patterns, allowing the textiles to be combined in interior vignettes that outlast passing trends. “Everything fits together,” Tick says. “Some of the first things we did are still being pulled in with new products.”

Luum’s inaugural collection features nine fabrics primarily for the corporate market: two large-scale upholstery fabrics for use on collaborative seating as well as two smaller-scale performance patterns, three vertical fabrics for walls and panels, and two multipurpose fabrics. Throughout its catalogue, Luum offers a range of shades for each color—what Tick calls an analogous palette—which can be layered to create visual dimensions in today’s sprawling, open-plan offices. “You never go to the forest and see one shade of green—you see 50 or 100,” she says. “For us, we’ll probably be coming out with fewer products but broader palettes, because this is the right way to be looking at color right now.”

Expressed through a hand-drawn logo, Luum’s brand isn’t as much a philosophical overhaul of Teknion Textiles as a refinement of the business’s commitment to blending craft, design, and performance in every piece of utilitarian fabric. The mark, by the San Francisco–based creative agency Tolleson, balances technical efficiency, evinced by generous kerning between the sans-serif letters, and the organic, with gentle curves on the L and M. “It’s very Muji,” Tick says of the understated graphic identity. “We wanted the mark to be quiet and timeless, to let the product be the hero,” says Jamie Calderon, Tolleson’s creative director.

White, who is now the vice president of Luum, thinks the relaunch comes at an opportune time, as many of the brand’s industry rivals are undergoing changes in leadership. “There’s a big generational shift,” he says. In 2013, for instance, Herman Miller bought Maharam, a family-owned textile maker and a shining light in the industry, for $156 million. Also, “Arc-Com is in a transition period, and Architex is in the same spot.” In order to take advantage of the opening, Luum needed to not only rebrand but hire a separate sales force from Teknion’s, which has historically focused on selling expensive furniture sets over moderately priced upholstery. “As a percentage of the total dollars spent within a project, fabric might be 4 percent, so if furniture is $100,000, fabric is going to be $3,000 to $4,000,” he says. “But designers are really passionate about textiles, because dollar for dollar, they make the biggest impact on a space.” 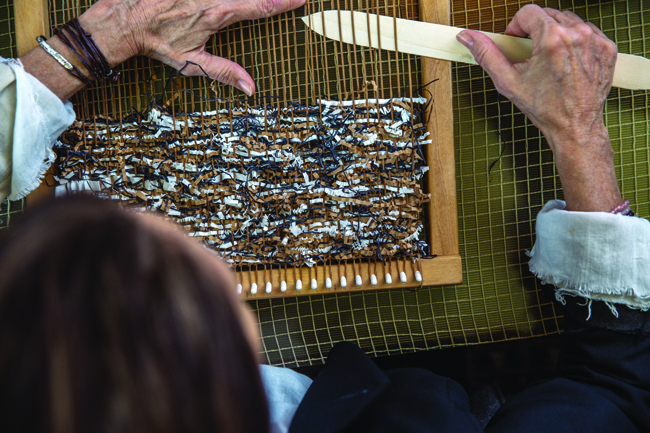 Luum, White says, also has a size advantage: It’s small enough to customize solutions for designers’ needs and large enough to create enough volume to keep prices affordable. “The beauty of having a more boutique, crafted approach is that we don’t have to ship something out the door because we have to get ‘X’ number of styles out this year,” he says. “We can take the time to get it right.”

More often than not, Tick gets it right. Recently, the Cooper Hewitt, Smithsonian Design Museum acquired two of her upholstery fabrics for Teknion: Bonded (a polyurethane-coated acrylic-cotton mix in a basket weave with lightly metallic tones) and Line Language (a polyester and nylon upholstery fabric featuring a linear pattern reminiscent of sumi ink, charcoal, and graphite). The designer focuses on architectural patterns, which, she asserts, can ease an age-old tension between architects and interior designers. “Architects and decorative designers never really worked well together,” Tick says. “Our collection allows designers to pick an architectural material that they can marry with the building.”

Tick insists that her fabrics not only have aesthetic value but can withstand the wear and tear of commercial interiors. All the textiles in the new collection meet or exceed heavy-duty contract requirements—four of the patterns are bleach cleanable—and are highly durable, with three patterns able to resist 100,000 double rubs, the industry standard in abrasion testing. “People wouldn’t even realize that some of our work has bleach-cleaning capabilities because they look like they’re a $200 [per yard] product, and yet they’re more like $60. Our products and price points are phenomenal for what we’re giving to the market, because we don’t have a huge infrastructure—it’s a small, tight little company that invests in materials.” The brand is largely PVC free, although Tick, to her chagrin, grandfathered two vinyls into the collection. Other sustainable practices include using postconsumer and postindustrial recycled content, chrome-free leathers, and chemical-free finishes.

Part of Tick’s success lies in her long career of collaborating with textile mills; she got her start in the early 1980s working under midcentury weaver and designer Boris Kroll, who mentored a whole generation of textile industry leaders. As a result, the mills sometimes give her dibs on never-before-used yarns. During a studio visit in April, her loom was filled with different weavings of a new material that she hopes to fashion into a scrubbable wall-covering. “We have a reputation for developing new structures,” Tick said while inspecting the weavings. “And a lot of the products we have developed over the years stay in the line for 20 years, so it’s not a gamble for the mills.”

She is herself a solid bet for designers with whom she has an estimable rapport. “We host designers at the studio to show them our process and listen to theirs,” says Lynne Willis, Tick’s textile design director. “We listen to what their challenges are, what they’re trying to understand, and how we can help with that. Clearly, it works well.” Tick also consults for Skyline Design, a glass producer, and two flooring companies, Tarkett and Tandus Centiva.

The studio’s experience with flooring is a unique asset, White says, because flooring is a designer’s starting point for many interior projects. That was true of Apple’s new Norman Foster–designed headquarters in Cupertino, California, where designers on the project initially invited Tick to consult through Tandus Centiva on the office’s flooring. In the process, she also sold them on wall coverings from Teknion Textiles, whose Altos architectural wall system will also be used in the space. “Had we not been there, they would have gone somewhere else to get the textile made,” she says, as if to underscore that, whether her designs are branded under Teknion Textiles or Luum, their success, at least in the short run, rests on Tick’s talent for building relationships with her design compatriots. “That’s the beauty of what we have to offer—this hands-on approach to understanding the needs of the customer.” 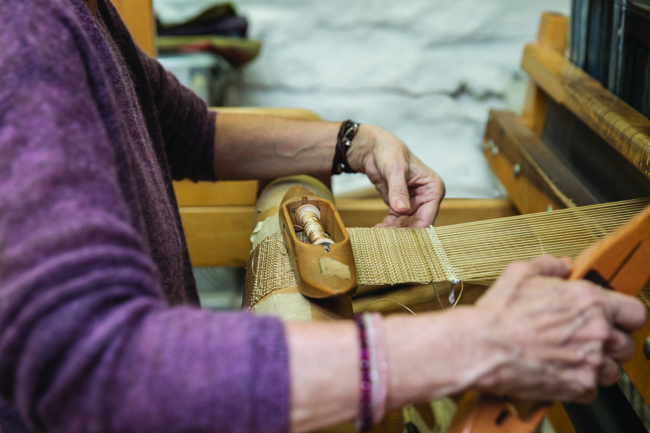 Tick began her career in the early 1980s working under midcentury weaver and designer Boris Kroll. She has a long history of working with mills to weave constructions from new types of fiber, which she often experiments with at her own loom in her studio. 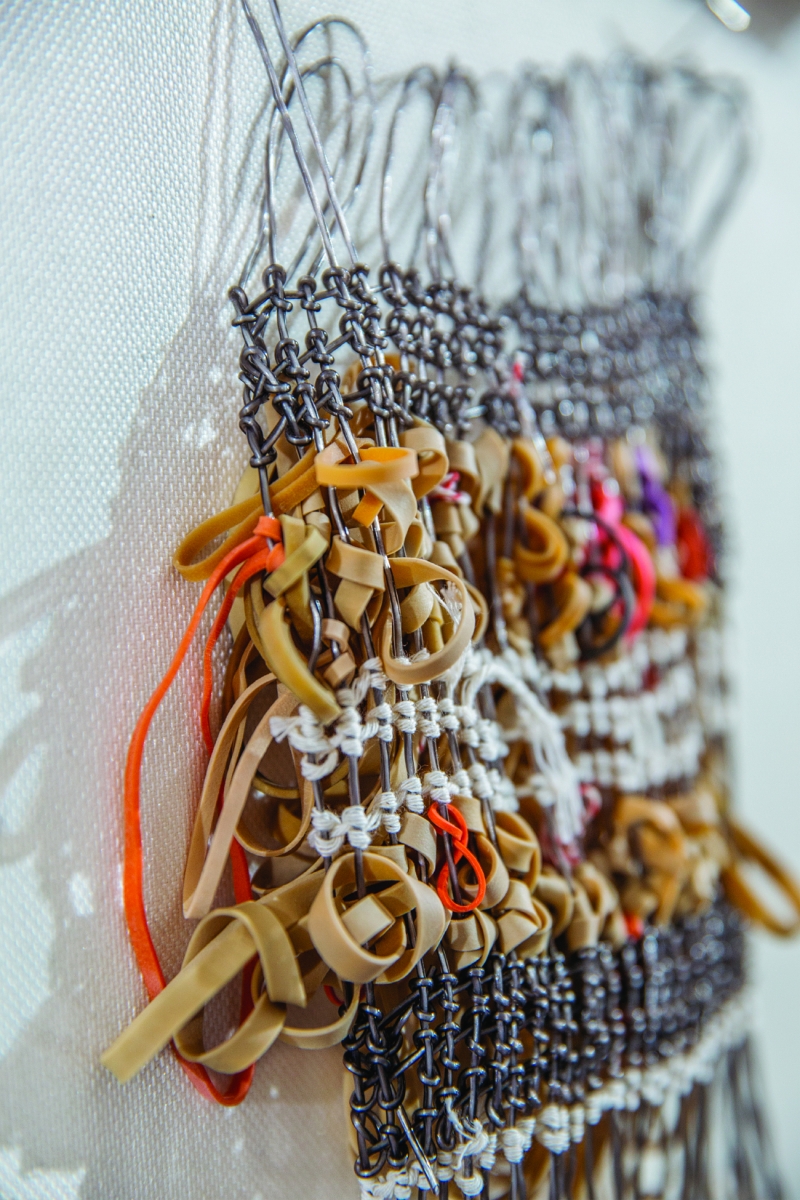 During a recent visit, she was working on different weavings of a never-before-used thread that she hopes to fashion into a scrubbable wall-covering. 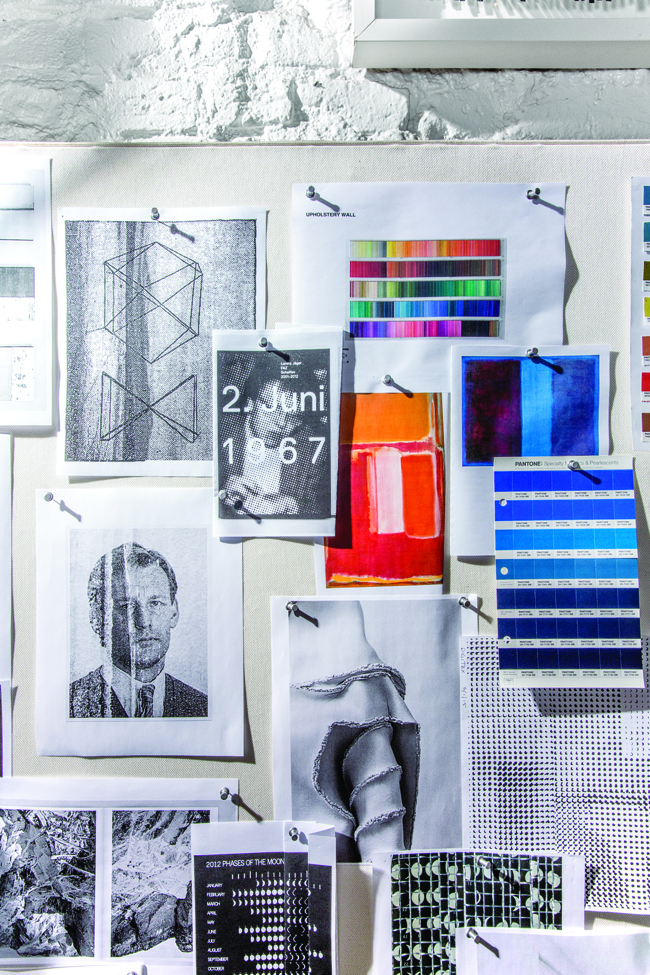 Inspired by architectural structures, Tick eschews decorative patterns in favor of creating analogous palettes—various shades of each color that can be layered to create visual dimensions in open-plan offices (below). 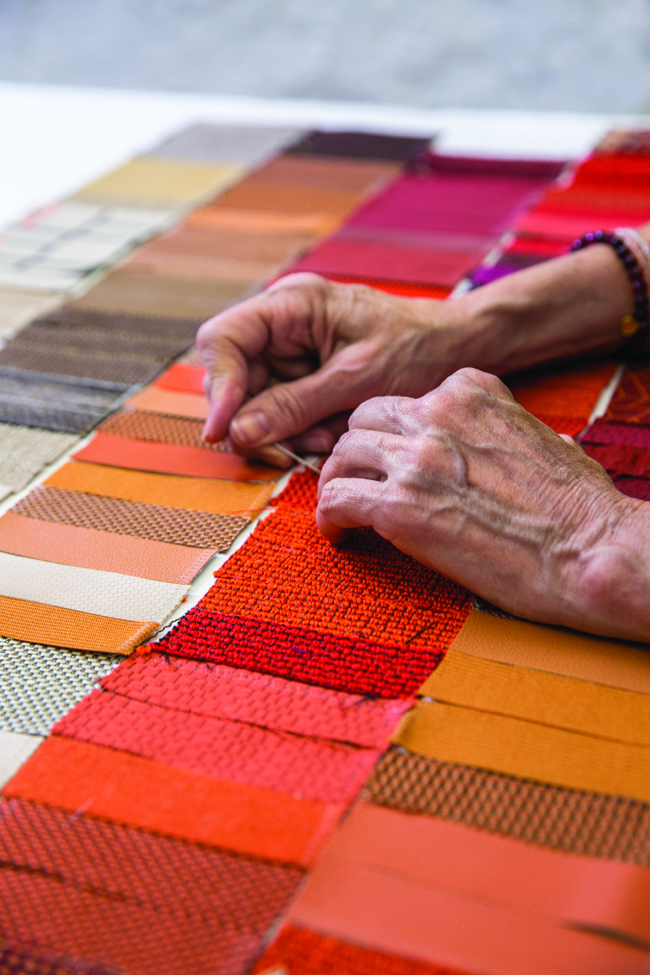 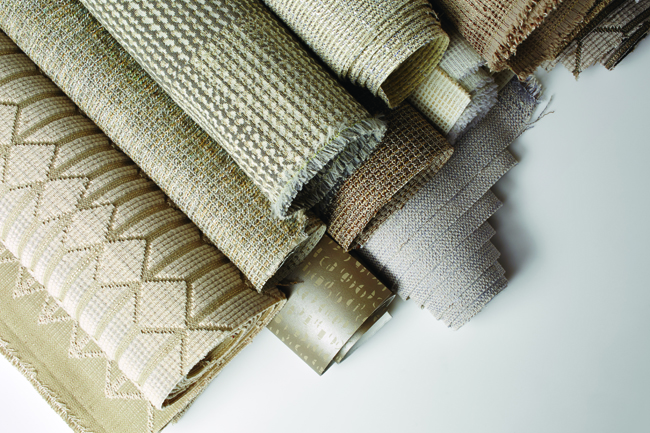 According to Tick, Luum’s advantage is an artisanal approach that integrates technical performance and sustainability. Luum’s offerings include chrome-free leathers, chemical-free finishes, and recycled content; shown above are several patterns from the Starting Point collection. 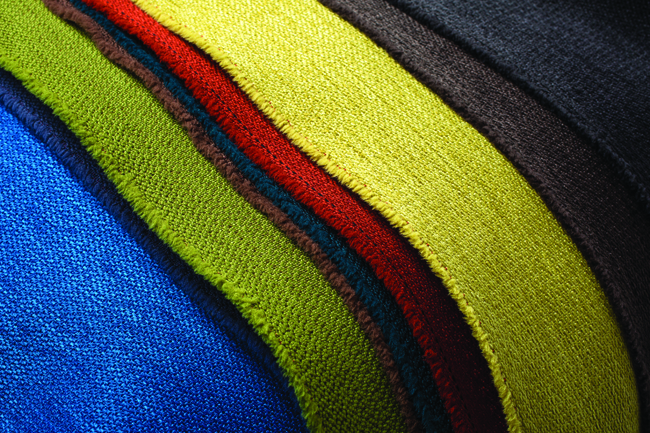 Individual textiles from the collection, like Percept, are also available in a wide array of colors and shades.