The Art Of The Moroccan Riad

The traditional guesthouse has a renewed appeal in Marrakech

If you’re looking to explore the elegance of desert culture, The Riads of Marrakech is a good place to start. The book, newly released by the Antique Collectors’ Club of New York, of Elan Fleisher’s sumptuous photographs, showcases a dozen exquisite interiors replete with craft, color, texture, architectural detail, decorative flourishes, mysterious light, and lessons in how a parched region relates to sun, air, and water. Herewith is a short lesson in the art of the riad, excerpted from Fleisher’s book. — SSS

By its strictest definition, a ‘Riad’ is an enclosed garden or courtyard (also spelled ‘Riyâd’ in some quarters). However, by popular usage, the term has come to represent traditional Moroccan homes, built around such an enclosure and more specifically those homes that have been renovated and restored and opened to the public as intimate guesthouses.

This type of construction, with both public and private rooms organized around a central open courtyard, is a key distinction of Islamic architecture and remains remarkably consistent throughout the Arab world, from private dwellings to places of worship through to the grandest palaces. The inward facing scheme of the Riad is designed to maximize family privacy from the outside world. Such privacy is highly prized, conforming to Islamic cultural norms. As such, rooms typically have windows and balconies looking back inward to the courtyard rather than outward facing. This keeps the focus on the courtyard as centre of all house activities. 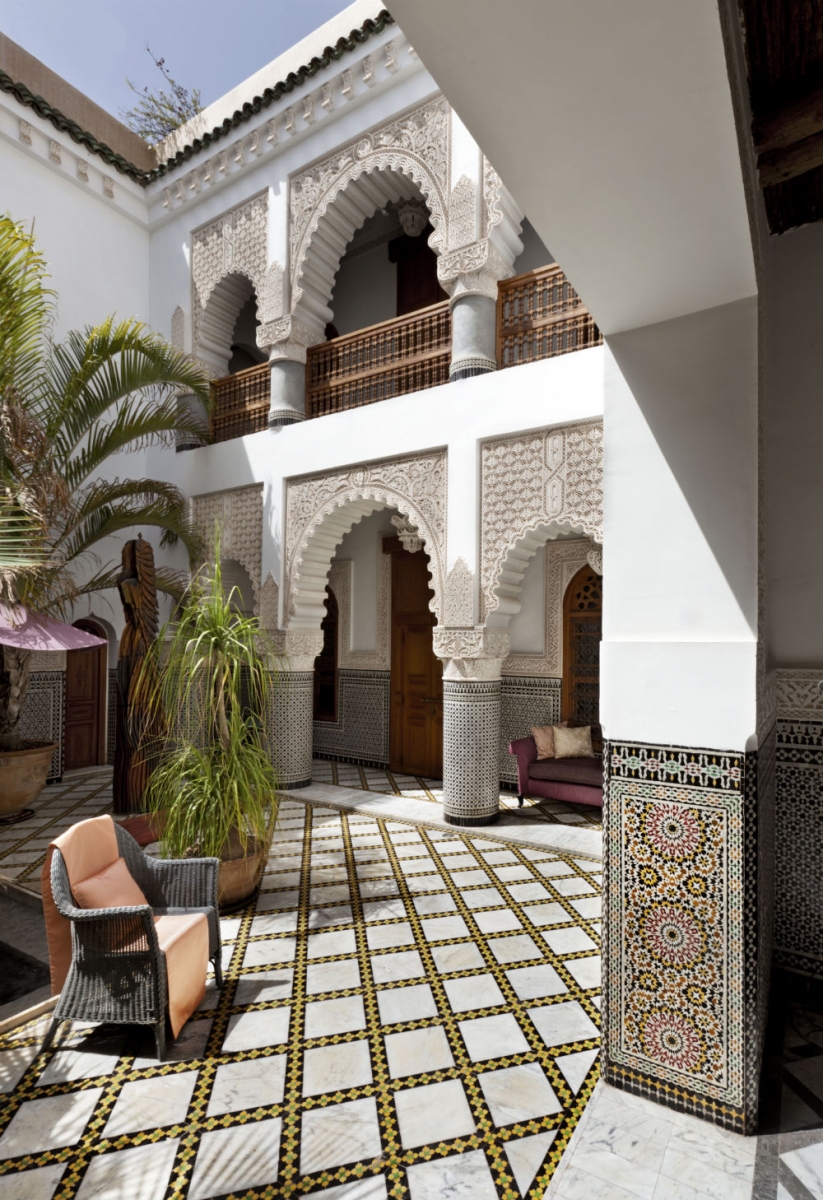 The Moroccan home in the Medina will have no frontage and is distinguished only by a modest door. The structure’s outer walls and the outer walls of other homes parallel each other to form the alleys and passages through the Medina. This is the basis for the most striking of contrasts and contradictions, that of the grim and oft-neglected public street and the highly ornamented, highly decorated and well-kept inner dwelling. The outer house door will open into a setwan, a modest sitting area where guests can be received without disturbing the inner house. From here a corridor will lead into the house and the open courtyard.  This corridor will most likely be angled to shield from sight the inner life of the house. The lighting in the setwan will be very subdued, for a transportive experience of inward passage from dark to the brilliant illumination of the open-sky courtyard.

The courtyard is invariably square or rectangular in shape, set around the sahrîdj, a fountain or basin. The importance of the sahrîdj in the Riad cannot be understated. Water is a potent symbol of life in desert lands and as such is valued as sacred. It represents the vital life force of the house. Thus, the courtyard is the focus of the house and the fountain or basin is the focus of the courtyard. 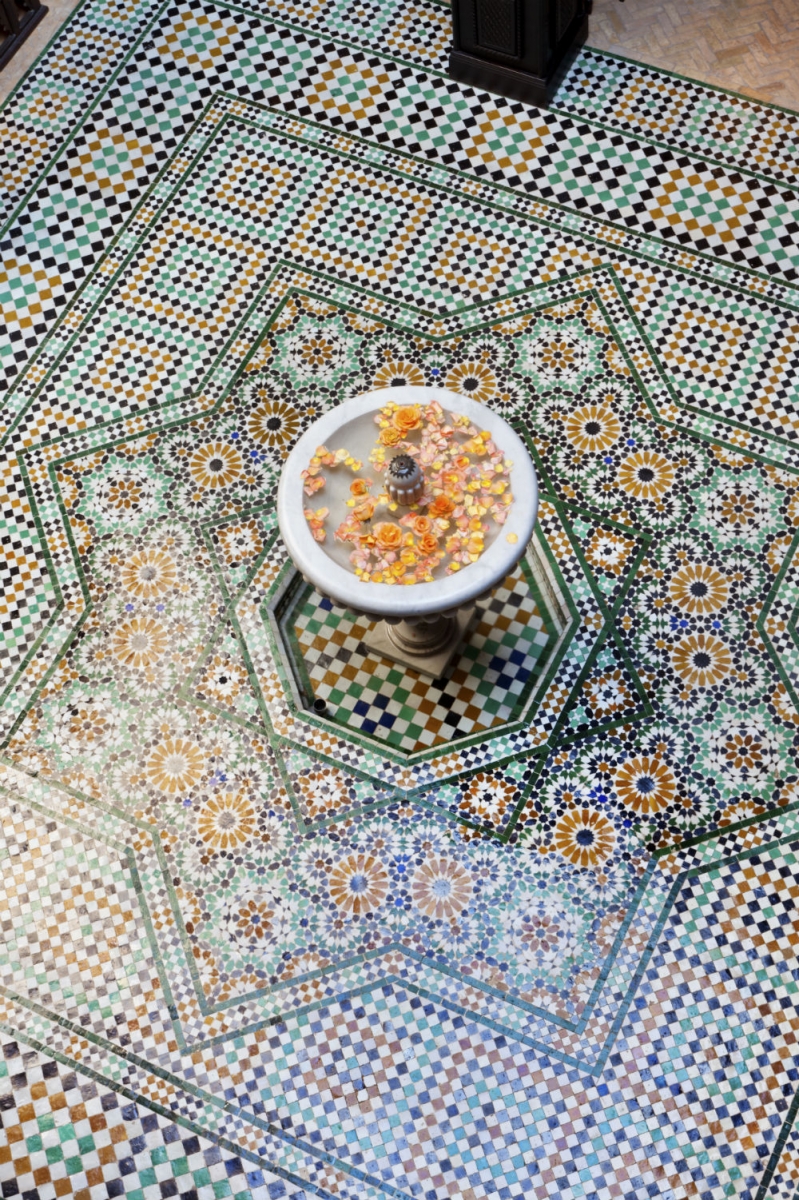 An inner garden is also highly prized and courtyards are likely to feature native citrus trees, palms, and jasmine. Their fragrances add to the tranquility of the trickling waters, for a perfectly balanced and harmonious oasis of peace.

Elongated rooms, called bâyts, line the perimeter of the courtyard and are typically devoted to public salons and dining rooms. Each has a central open arched passage, which looks upon the courtyard and fountain. Tight winding stairways, illuminated with dappled lamp lighting, are tucked into the building’s corners, leading down to hammams or up to the upper level, where private rooms are found. This upper level is lined with open colonnaded galleries, serving as passages between rooms, and being covered, both the passages and the private rooms are kept unusually cool considering the strength of the sun in Arab lands. 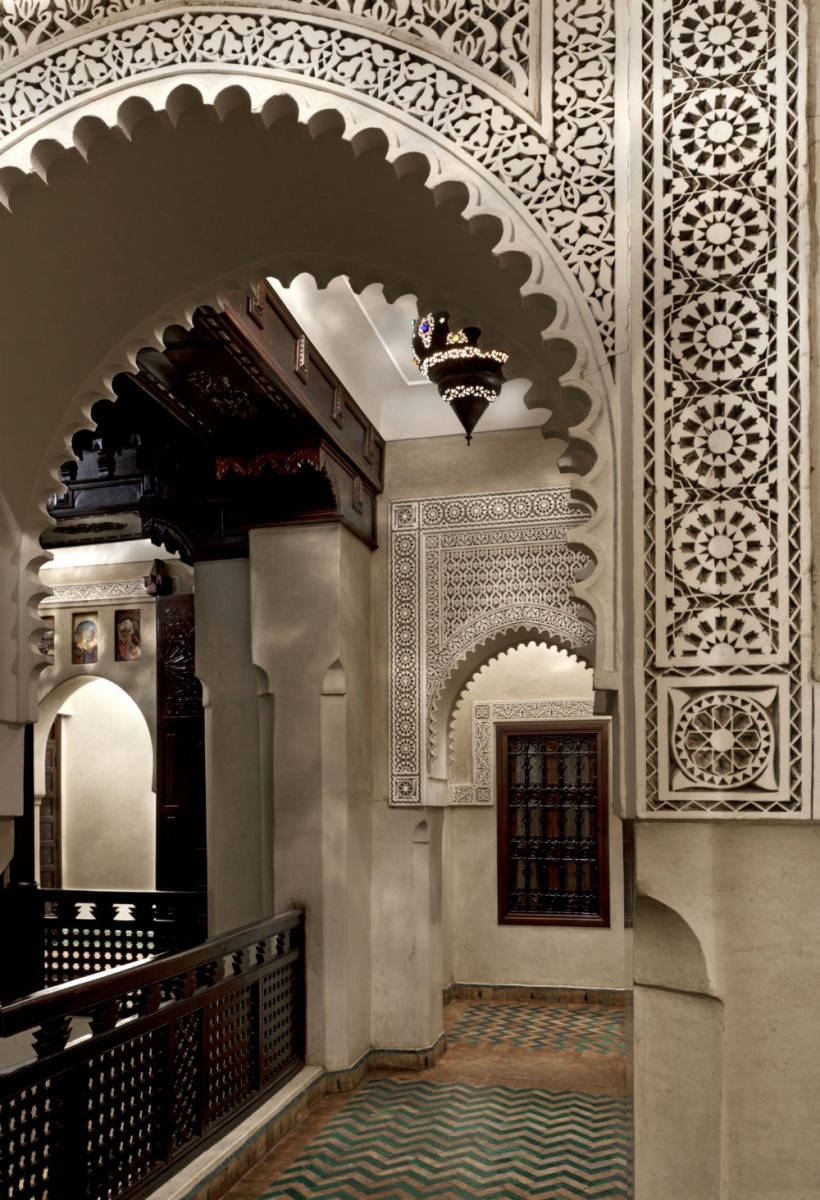 This forms the basis of the Riad floor plans, although many public Riads are often a collection of many courtyards and have found new ways of reinterpreting the form. Within the Riad, the surfaces contain remarkable degrees of ornamentation and handcrafted arts. The smooth colored broad tadelakt surfaces offer a counterpoint to customary complex geometric tile work, called zelige, and intricately carved wooden lattice moucharabieh screens. Intricate stucco cornices and trim, called gebs, join walls and ceilings, and support beams feature another complex Moroccan handcraft, zouaq, colorful hand-painted wood.

As Islamic tradition forbids the representation of living figures in decorative arts, geometric or floral forms serve as the basis for the multi-faceted designs. Smaller additions or entire corners of the building , called douiriya, are devoted to servants’ quarters and washing  areas, and most importantly the kitchen. Roofs, conforming to the contours of the Riad, offer respite from confinement with open horizons and views over the Medina. In private homes, this flat space could be turned over to storage or laundry hanging, or even keeping livestock. Invariably in the converted guest homes, the entirety of the roof is devoted to solariums, drinking & dining, and occasionally dipping pools. 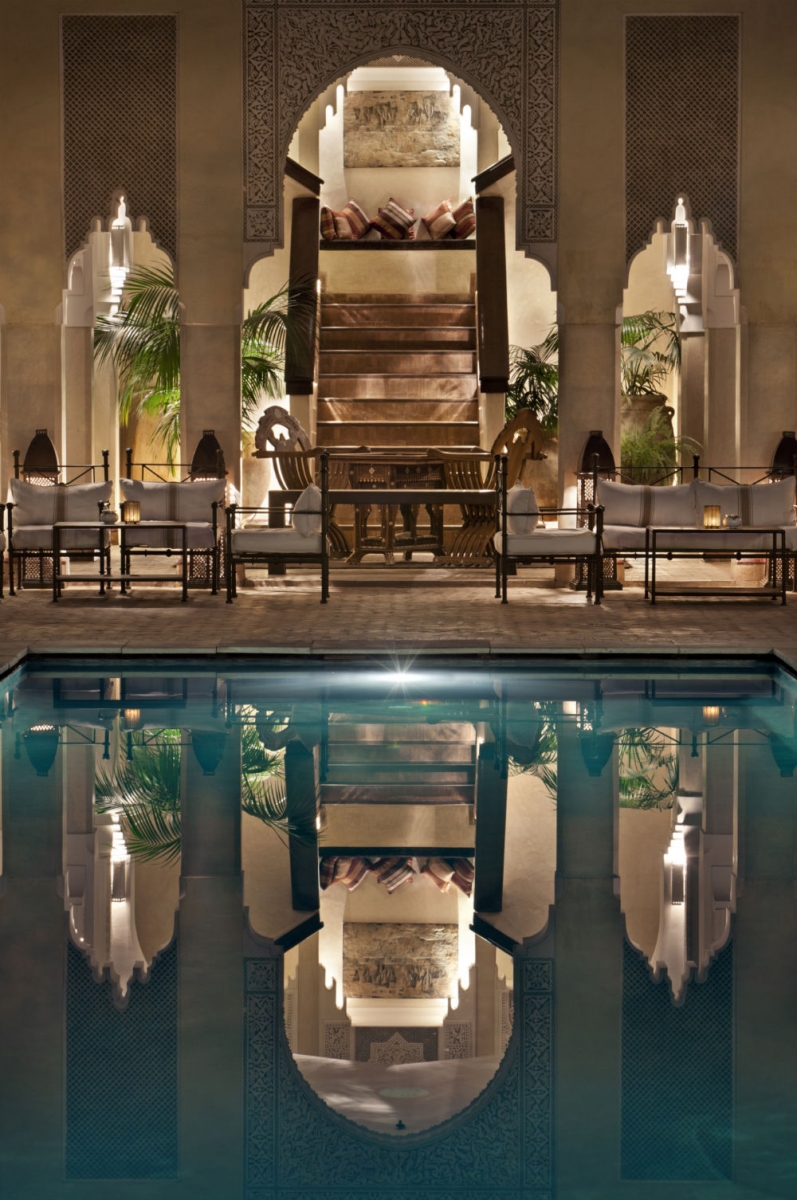 Amenities such as hammams, swimming pools, and modern comforts represent a necessarily modern twist to Riad life. During the French protectorate of the last century, city development was concentrated in the new town, ignoring the Medina, resulting in its subsequent lapse into decay. A profusion of European homeowners, passionate for the Moroccan domestic lifestyle, brought valuable investment and currency into a relatively poor country, which has revitalized the Medina. It has also played a vital role in keeping alive Moroccan handicraft traditions, which are passed down from father to son. Indeed, although fundamentals of Riad design have been highly canonized within Islamic architecture, through the ages the vast majority of the fashionable Riads have been developed by Europeans. Subsequently, these remarkable homes have expressed such principles in highly original and eclectic fashion. Be your Riad customary or unconventional, your stay promises to be an exotic, romantic, and fully transcendent Moroccan experience.