The High Line’s Last Section Plays Up Its Rugged Past

The final stretch of New York’s elevated park is a satisfying conclusion.

View looking west along one of the Rail Track Walks.

The promise of any urban railroad, however dark or congested its start, is the eventual release onto the open frontier, the prospect that those buried tracks could, in time, take you anywhere. For those of us whose only timetable is our walking pace, this is the experience of the newly opened, final phase of the High Line. The park, after snaking in its two initial stages through some 20 dense blocks of Manhattan, widens into a broad promenade that terminates in an epic vista of the Hudson. It’s a grand coda and a satisfying finish to one of the most ambitious park designs in recent memory.

Now fully realized, the High Line’s meandering plan produces a pleasing figure. Oriented almost linearly north-south, the park runs from the Meatpacking District to Hudson Yards, before it suddenly curls—like an inverted question mark—due west towards the Hudson. Its lengthy curve through the site was dictated, like that of the looping Lincoln Tunnel onramps in Weehawken just across the river, by engineering exigencies to handle grade change in limited space. Phase Three’s design, by landscape firm James Corner Field Operations with architects Diller Scofidio + Renfro, emblazons this fact. While southerly portions are replete with forking paths and landscaping that intentionally obscures and tantalizes the view ahead, the park’s last stretch grows suddenly and arrestingly wide. There’s space for ample seating on all sides, with a school of those almost-Seussical wood benches positioned directly astride the central promenade. They seamlessly fold down into the “peeled” concrete deck, demanding only that you sit down for a moment.

The space here seems vast. The High Line may be the one place in New York in which having your pace set by tourist shoals isn’t too deranging, but this northern portion mercifully offers a chance to dart around any especially glacial perambulators. 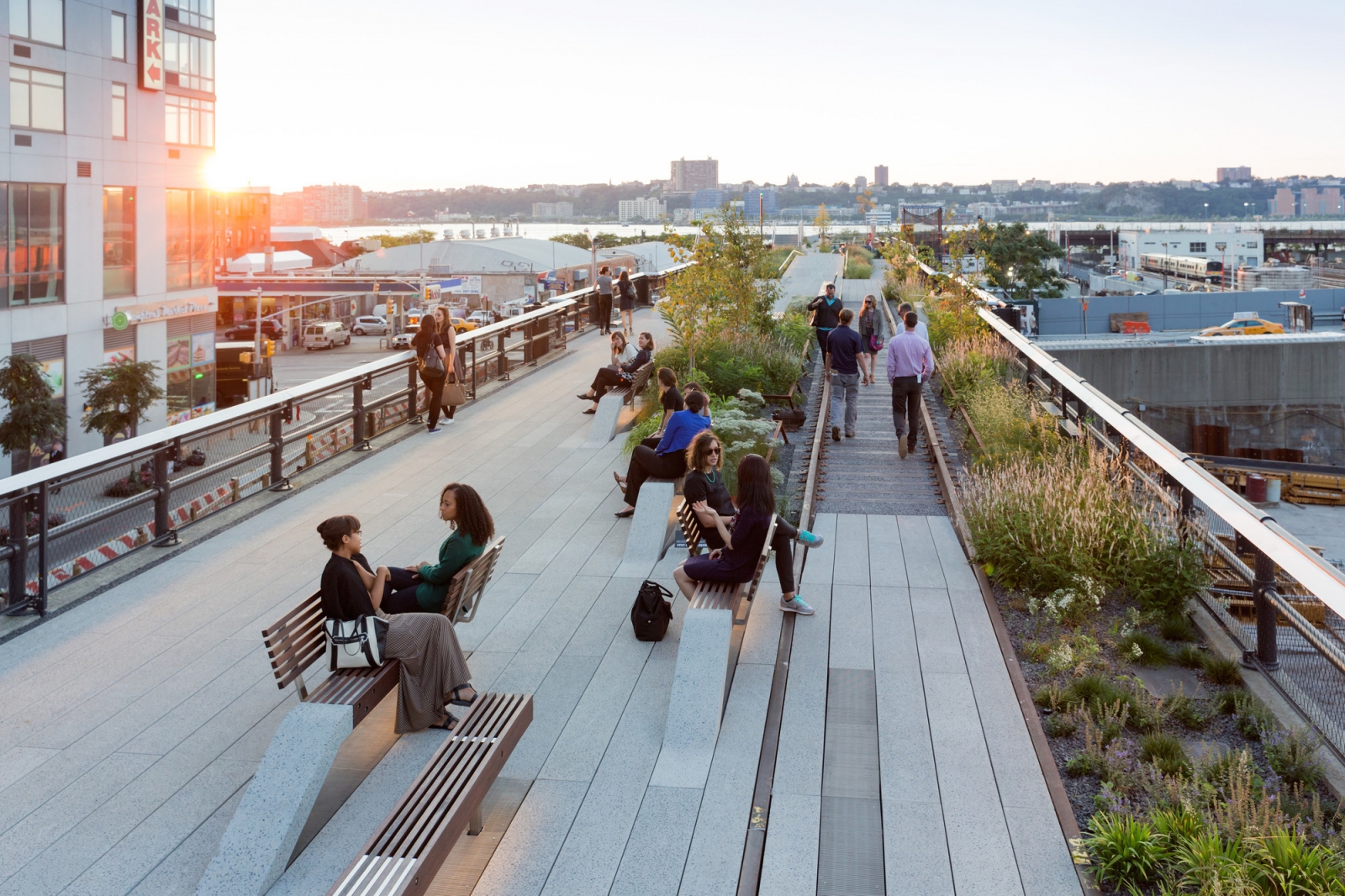 The broad platform splits after a while, but not to dissolve amidst trees as is often the case in stretches to the south. On the right you’ll find what Sinclair Lewis referred to as “a monster of steel limbs, oak ribs, flesh of gravel, and a stupendous hunger for freight”—unburied tracks that you can walk on with no fear of freight (nor, given the food kiosks a few blocks away, stupendous hunger). These tracks turn to a play area as the park weaves on—and then, surprisingly, into a fenced portion of the park retained in its original fascinating decay. Here, the foliage isn’t exquisitely plotted; it’s a glimpse, for those of us not fortunate enough to encounter the High Line in its prior days of disuse, of that ragged but entrancing era.

The final phase offers a functional reminder of the structure’s past. The Hudson Yards portion of the line, after all, was necessary to the trail’s successful acquisition. CSX, the last operator of the line, did not actually own its route, but, like many railroads, held a series of land easements for its continued operation. If a rail line is simply abandoned, owners along the route are free to reassert use of their property. Railbanking, the legal process by which lines can be used and maintained by civic authorities, relies in many initial cases upon the (frequently speculative) notion that a corridor is being maintained for theoretical future rail operation. This, in turn, requires a feasible connection to a rail network—in this case the Hudson Yards loop. Once CSX had donated the tracks up to 30th Street to the city in 2005, the question became essentially moot, but the final stretch was no less dear to the park’s valorous champions (and was subsequently gifted to the city in 2012).

Esoteria about railbanking aside, a significant reason that the new portion offers a striking link to its actual railroading past is that it still looms over the very active MTA Hudson Yards. Looming above the site, the park offers a panorama of marshalled and creeping trains, in one of the most utilitarian views that a New York park has to offer. This, of course, won’t last. 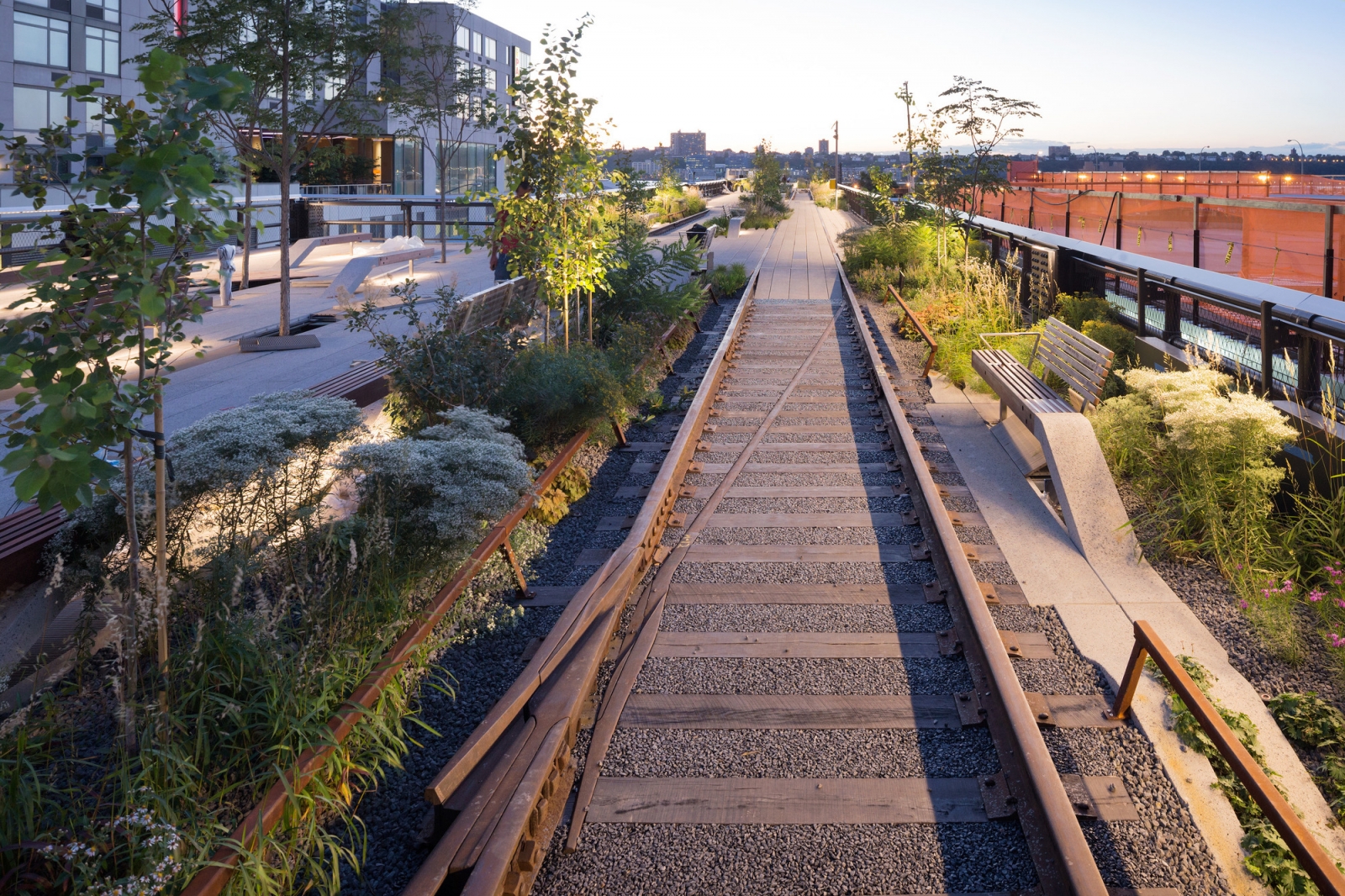 Detail shot of one of the three Rail Track Walks at the High Line at the Rail Yards, featuring a rail “frog” or moment where the rails change directions.

Which brings me to a second impression about the site, its role as both catalyst in and platform for watching the city’s change. The sort of area that the High Line of a decade and a half ago, when Adam Gopnik’s 2001 New Yorker piece first appeared—the one teased by the unscrubbed portion of track, showcasing homeless camps and a junkyard of computer parts—this no longer even remotely exists. Gopnik wrote, of the High Line’s elevation, “that [a] little height makes even ugly things below look orderly and patterned.” There are no longer any ugly things beneath the High Line, except perhaps for the rail yards, and those are soon to go. The first Hudson Yards towers can be seen rising, and the exposed tracks will vanish beneath a vast deck. We’re a nation of land rushes set off by the opening of railroads; the far west side is likely the most dramatic case of land rush set off by the certain closure of one.

The High Line has proven the hottest table in town, and new buildings have sidled up like eager diners along nearly every available portion. The south end has come off generally well, fronted by either the venerable old or the very chic; the middle portion is increasingly choked with staid and beefy diners. Turnover is inevitable in a place like New York, however, and the park’s last leg offers a splendid vista from which to consider it. 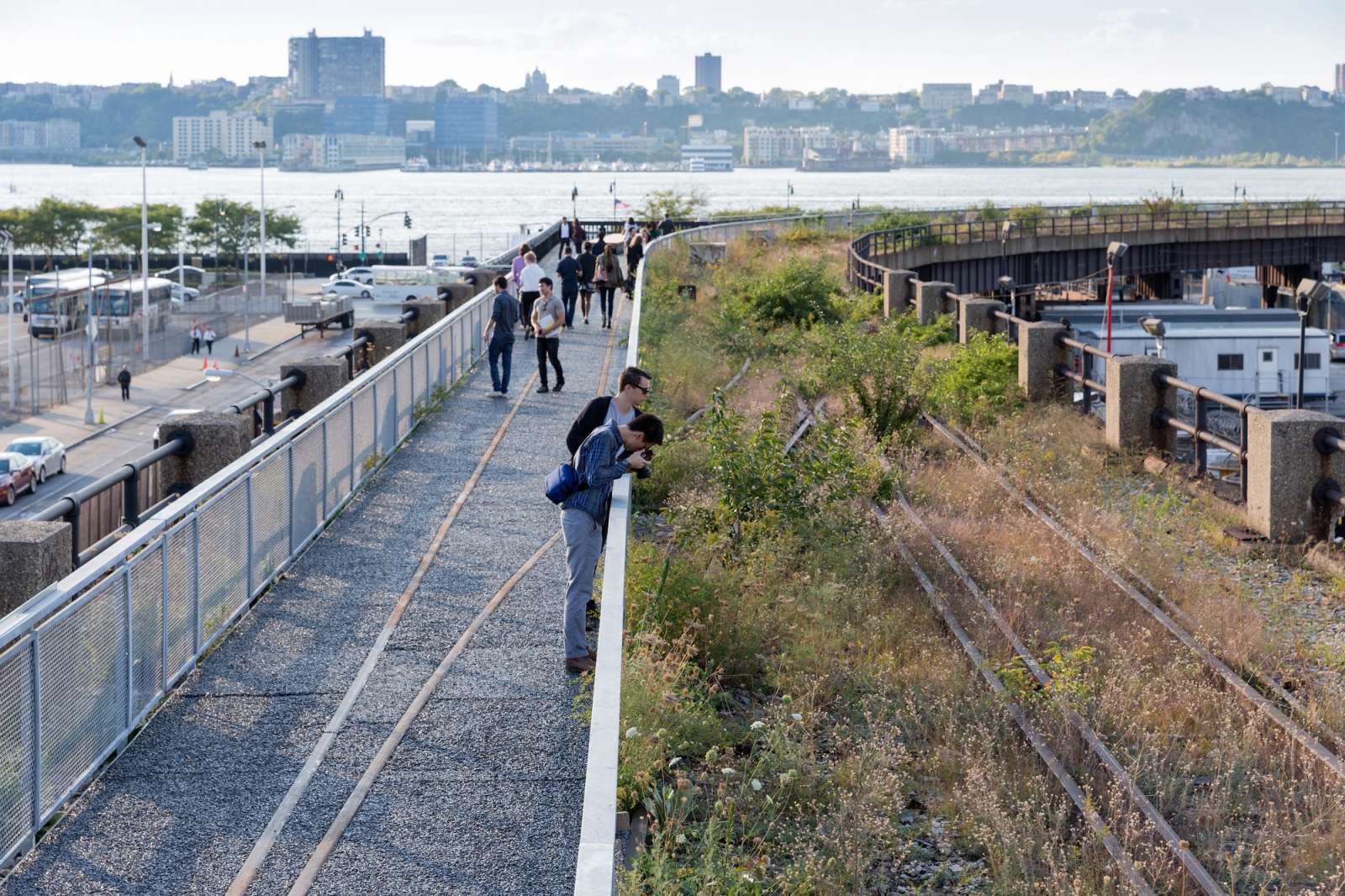 Most importantly, however, given the as yet unclear future of Hudson Yards, this stretch preserves a view that, for the most part, new construction cannot and will not efface. The initial phase of construction at Hudson Yards is underway; the first tower at the site, 10 Hudson Yards, can be seen cantilevered over the line’s small Tenth Avenue spur, an impressive effort at preservation on the part of Related Companies. A direct 60-foot connection to the Hudson Yards Plaza is planned, another welcome connective link. Yet the line runs along the periphery of the site otherwise. The view toward the Hudson is guaranteed; the track runs directly along the West Side Highway, and there’s only parkland on the other side. Related’s plan for the west side of the site involves few structures and mainly parkland (the exigencies of building over the railyard permits few workable foundations—the only exception is a structure that might again cantilever over the south end of the site but that hasn’t yet been designed). The density of Midtown feels very distant, and, even given eventual towers to the west of Eleventh Avenue, seems likely to stay that way.

As the track winds back east, its sudden loss of height is something of a shock. Elevation, ontologically, is the one thing that you could always rely on with the High Line—to perceive the ramp declining rapidly to street level was initially bewildering, doubly so to emerge, across from the Javits Center, directly into those Megabus queues familiar to any cheapskate traveler. Frederick Jackson Turner defined the frontier as that which takes the traveler “from the railroad car and puts him in the birch canoe.” Here, it takes you from the railroad track and puts you on the bus to Toronto, Buffalo, Rochester, and Syracuse.

But wait, walking back along 34th Street only briefly there’s suddenly more nearly finished parkland visible behind fencing—part of the upcoming Hudson Boulevard. And a new park begins. That’s a walk for another day.