The Rocky Road to Green Design

Photo: Morley Von Sternberg.It’s ironic to think that some of the most pleasant and appealing structures in the U.S. have had some of the most painful births. Take Yale’s Kroon Hall. This $33.5 million LEED Platinum flagship building of the University’s School of Forestry and Environmental Studies (FES), opened last spring, has the comforting exterior […]

It’s ironic to think that some of the most pleasant and appealing structures in the U.S. have had some of the most painful births. Take Yale’s Kroon Hall. This $33.5 million LEED Platinum flagship building of the University’s School of Forestry and Environmental Studies (FES), opened last spring, has the comforting exterior of a classic Connecticut barn set amongst Yale Gothic. Bordered by inviting courtyards and a water garden, its sun-filled 58,200 sq. ft. interior features red oak paneling from sustainably managed forests, healthy low-VOC workspaces and cheerful gathering areas for students and faculty. A 100 KW photovoltaic rooftop supplies 25% of the building’s electricity, its water is heated by photovoltaic panels embedded in the southern façade, its air is heated and cooled by deep-well heat pumps, low-velocity basement fans and cooling water spray, and circulated by natural convection. Rainwater is captured for grey water toilet flushing and irrigation. Windows can be opened and closed at will (optimally by heeding sensor-activated red and green light signals during the day).

Kroon Hall is indeed one of sustainable design’s pioneers, having had its genesis from the 1990s through the first decade of the 21st century. At its heart is a concept called biophilia, advanced for the past 20 years by Stephen Kellert, Yale professor emeritus of social ecology, and famed entomologist Edward O. Wilson. Biophilia acknowledges the human need of a fulfilling connection with nature. Its structural expression in Kroon Hall was driven to fruition by James Gustave Speth, the then dean of FES and a world-recognized leader in environmental studies. 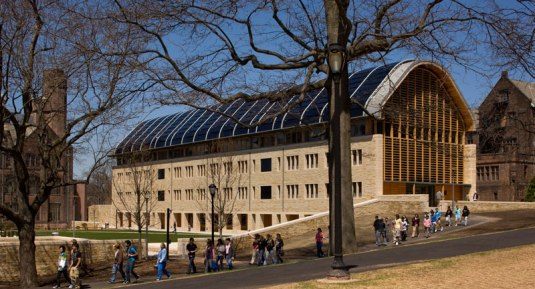 Yet Kroon Hall came about only after the near resignation of dean Speth and repeated frustrations experienced by professor Kellert and others. Kellert and deputy dean Alan Brewster spearheaded the design process through initial skepticism and doubt expressed by some Yale faculty and facility management staff. “Some people thought we were smoking weed,” says Kellert, “and one lesson I learned was the importance of working with, understanding and appreciating the work of people that academics are historically not used to working with.” Kellert says his one regret was not having promoted the biophilic aspects more vigorously “but, at the time, this was somewhat more difficult to talk about than it is now.”

Initial resistance was symbolized by the stubborn existence of a power plant on the site of this would-be sustainable icon. Speth and Kellert, having been assured otherwise, learned that the power plant was not going to be demolished after all. Speth determined that having two fossil fuel boilers located hard by the school’s flagship green building would be an unimaginable disaster. “Can you imagine how silly we would all look if Yale’s first green building had at its heart the very technology we are trying to replace?”, Speth wrote in a letter to the university provost. It was either he or the power plant that had to go, he concluded. In the end dean Speth’s Yale career was saved, and the power plant removed, when Yale president Richard Levin acknowledged his concerns and expressed gratitude Speth had forced the issue.

As planning progressed, Kellert experienced another frustration not uncommon with innovative design projects such as Kroon: repeated cost modeling and value engineering by the contractors involved, even though in this case they were two of the best in the business, Turner Construction and Arup. “Costs always seemed higher than the estimates, and it sometimes seemed no one could get it right,” he says.

Key to ultimately getting the project off the ground and completed, everyone agrees, was the signing on of British architectural firm Hopkins Architects, the finalist in a competition featuring three European firms as the top finishers. “European firms at the time were considerably ahead of American firms in energy efficiency because of Europe’s higher energy prices,” says Alan Brewster. “The concepts involving PVs, heat exchange pumps, air handling and water conservation came from them and UK consulting firm Atelier Ten. It was our role to review them and say yea or nay.” Another plus, he says, was convincing local firm, Centerbrook Architects and Planners–one of six finalists—to serve as executive architect for the project. “It was rare to have the level of resources we had available across the board,” says Brewster.

A year after opening, Kroon Hall is still going through its shakedown. It is continuing to develop monitoring systems for its sustainable features and coping with such issues as an unexpected spike in energy utilization due to the round-the-clock popularity of its third floor gathering space. 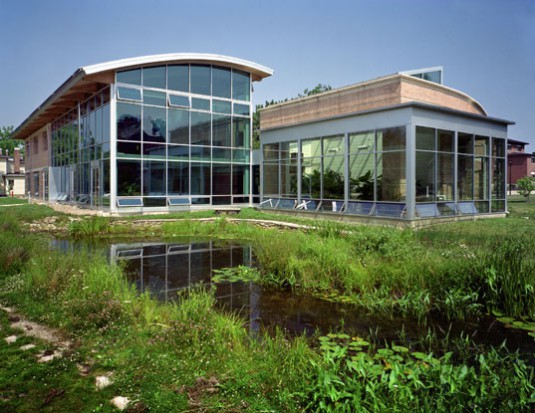 Meanwhile, its story poses remarkable similarities with that of its Oberlin College-based counterpart, the Adam Joseph Lewis Center, which houses environmental studies at that Ohio-based institution. Of approximately the same vintage, the Lewis Center went through its own baptism of fire, as described by professor of environmental studies and politics, David W. Orr, in a riveting book called Design on the Edge: the Making of a High-Performance Building.

In brief, the Lewis Center project was very nearly tabled by a green-agnostic administration and, upon design completion, went through a value engineering exercise that had to be expensively undone after the discovery that the energy-saving features had been removed.

Today the Lewis Center, like Kroon Hall at Yale, graces the Oberlin campus as the college’s sustainable icon. Things are easier now as LEED criteria and certification are gaining wider acceptance.

But the next time you venture into one of these environmentally stimulating yet relaxing structures, remember: green design does not come naturally. It’s still new, very new to some, and a painful gestation can only be expected.

Kroon Hall was featured in our February 2010 issue.

Richard L. Peck was founding editor-in-chief of Healthcare Design in 2001. Prior to that he established design coverage for a national long-term care magazine, Nursing Homes (nowLong-Term Living), which he also edited. Its DESIGN series of annuals, starting in 1997,  has promoted patient-friendly design and planning of long-term care facilities, and continues to do so. Peck, now semi-retired, continues to write for Heathcare Design, Healthcare Building Ideas,Long-Term Living and a senior care blog on the facilities search web site SnapForSeniors.com. His email is [email protected].