The Vanishing Buildings of the USPS

It’s no secret that the United States Postal Service is hitting hard times. Budget shortfalls have led to talk of ending Saturday mail deliveries, meanwhile delivery operations have already begun consolidating across much of the country. And while snail mail may be anachronistic in the era of electronic communications, the retrenchment puts at risk many of the storied structures that have housed the Postal Service for decades. In New York City, several historic structures face uncertain futures as they are considered for sale as part of this process.

At the south end of the Bronx’s Grand Concourse, the Bronx General Post office commands an entire block. Opened in 1936, the monumental structure is fronted on the outside with grand arched windows and a pair of sculpted figures. Inside, several New Deal-era murals by the prominent Lithuanian-American artist Ben Shahn cover the walls. These magnificent murals depict laborers milling textiles, farming, and engaged in other work. Shahn is well known for his left-leaning political artwork during the first half of the 20th century, as well as for his involvement with the controversial Diego Rivera mural in Rockefeller Center. 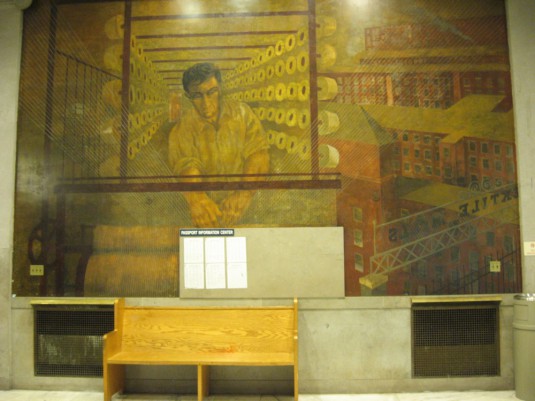 The Postal Service has made clear that it aims to sell the building, and the historic grandeur of the office may lead to its downfall. The 175,000 square foot structure now handles a volume of mail that the Postal Service believes only would require a 7,300 square foot facility. No final decision has been made regarding its fate, though it is clear that the Post Office is looking to pass it on for conversion to retail or other use. 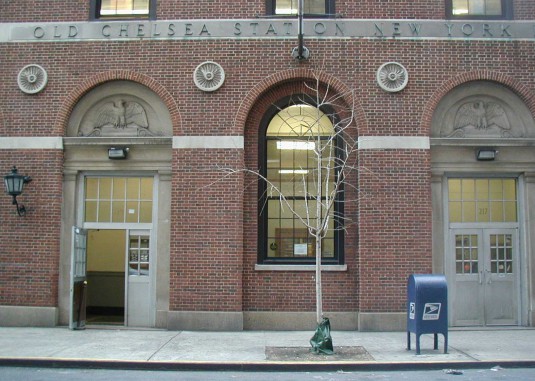 In Chelsea, another station built just a year earlier is facing a similar sale. But unlike the Bronx General Post office, is not protected by landmark status despite being on the National Register of Historic Places, and thus it is susceptible to more significant alteration if sold. The interior of this office also is home to magnificent works of public art – two bas relief murals by upstate New York artist Paul Fiene. The murals, depicting woodland animals, are more modest in scale than Shahn’s but are a memorable and appreciated feature for visitors to the building. After a 60-day period of public comment slated to end April 19, the Postal Service intends to sell this building as well, and relocate to a smaller structure.

It might be alarmist to consider the buildings lost if they are sold, especially given that it is unclear how dramatic the change to these structures would be under such circumstances. Regardless, these post offices have imparted their beauty and history upon visitors for over half a century and it is a shame to see this threatened by budget shortfalls.

Photos courtesy savethepostoffice.com, except when noted.

Brian Bruegge is an undergraduate student at Fordham University, majoring in communications and media studies, and history. He also studies visual arts and environmental policy, and has written for several other websites and publications on a range of topics.