Richard A. Glaser is an urban planner and landscape architect. He’s worked on everything from a landscaped backyard swimming pool to entire cities in the Middle East. He worked for large Philadelphia offices like Lou Kahn’s and for Marcel Breuer (planning Sadat City in Egypt). He worked in partnerships and as a sole practitioner. Swimming pool […]

Richard A. Glaser is an urban planner and landscape architect. He’s worked on everything from a landscaped backyard swimming pool to entire cities in the Middle East. He worked for large Philadelphia offices like Lou Kahn’s and for Marcel Breuer (planning Sadat City in Egypt). He worked in partnerships and as a sole practitioner.

Rich and I collaborated on projects as architect and landscape architect. So, from the perspective of objective design journalism, I shouldn’t even be allowed to write this piece. Well, if you should ever doubt the veracity of anything I’m saying, just ask his wife or his children. Just kidding. My real disclaimer is that Rich has nothing to sell. He’s retired. But what he doesn’t have to sell he has to offer: wisdom, experience, insight.

What I appreciated immediately about Rich was the importance he placed on architecture but not at the expense of his own craft and priorities. We’ve shared office space, design projects, design competitions and many philosophical conversations, sometimes arguments, about art, design, and life.

We met for lunch the other day at the Trolley Car Diner in Mt. Airy/Philadelphia and simply picked up where we left off…

“THE OCEAN IS GOING TO WIN EVERY TIME”

That was for starters. Even before our food arrived. I had mentioned that, where I grew up along the East Coast shore, engineers are always building and rebuilding massive, curved seawalls – big, reinforced concrete snowplows facing off against the inexorable forces of the Atlantic Ocean. Rich is right. Every time you think there’s no contest between simple water action and massive, solid concrete – the ocean wins. Again. What about the Great Wall of China? Nope. “Eventually, an earthquake will take that wall and tear it apart,” Rich gestures with his hands. “That’s how the world works.”

We talked about Holland and New Orleans. Holland is compelled to spend sufficient capital for flood control for the survival of the entire country. In New Orleans, most people who knew better, knew the worst-case scenario would happen but they couldn’t afford to or wouldn’t pay to build the walls high enough – and besides, those were “just” a bunch of poor people, anyways.

“The societies that do it right build lightly,” Rich observed. Okay, so let’s merge with nature, use the soft approach instead of counteracting nature, I say, playing devil’s advocate. “Do you know how that would destroy our economy? Do you think we could have built the United States of America out of bamboo?” Rich shot back. Well, now he’s being just plain unreasonable. But he calmed down and – we agreed – it’s a battle of values when it comes to society’s design and budgetary priorities. What really bothers him, though, is that there is no recognition of “how small we are” in the big scheme of things.

We talked about green technology and cities that are too densely developed. We need to create nature reserves within cities, as we tear down abandoned housing stock, for instance, Rich believes.

Somehow, by the time dessert arrived (Rich ordered apple pie. I ordered pumpkin.), we got onto the subject of Central Park and Frederick Law Olmstead. I said that Central Park is totally engineered yet it still represents a kind of humility and human scale. Yeah, if a small stone bridge falls, you can replace it, no big deal, said Rich. He also enumerated some of the various systems interwoven there:

Humility. Said Rich, “It’s something our society has no concept of.” 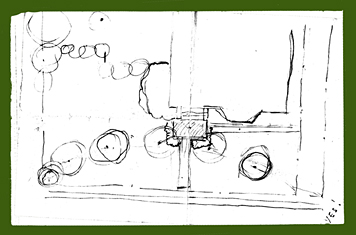 You have to see for yourself when Rich draws by hand. He draws diagrammatically. He can’t help it. It just comes out of the pen that way! Everything he does is so rooted in fundamental principles that it appears like a timeless distillation of thought. Yet I know he always adds a twist. He creates patterns in the landscape that have a hidden, internal logic that springs into view only when you are in a certain, specific (sometimes seasonal) spatial alignment with the plantings. He’s self-effacing that way.

He showed me a small pencil sketch for a landscaping concept he’s applying, literally, to his own front yard: a re-alignment of the walkway approaching his 1800’s Victorian red brick house on the “most beautiful street in Philadelphia,” as his street was once designated. He’s planting a widely spaced arc of ginkgo trees that will reflect gold light into his house when the afternoon sun hits the array of golden leaves—a beautiful vision blending the sureness and precision of geometry with the variability and vicissitudes of nature.

“It’s really a gesture to our future,” Rich says. “Will I ever see the ginkos reach maturity? No. But isn’t that the best thing we can do for our society?”