Two States of Mind in One

Jean Barr is living history. Every day. She may make a trip to the grocery store to pick up some fresh milk but returns to her house built in 1748, originally owned by a guy named Shippen who was an in-law of Benedict Arnold, infamous traitor of the American Revolution. What is it like to […]

She may make a trip to the grocery store to pick up some fresh milk but returns to her house built in 1748, originally owned by a guy named Shippen who was an in-law of Benedict Arnold, infamous traitor of the American Revolution. What is it like to live in a house with such an unusual connection to history?

We met at a neighborhood historic preservation group years ago. I had always assumed Jean was a long time Philadelphia resident which is true, since 1950. But that ain’t the half of it, as I was to discover this drizzly, foggy morning.

Jean welcomed me inside, took my umbrella, and we began an informal tour of her historic house facing the Delaware River. When she and her husband Russ first arrived it appeared they had bought “a pile of bricks with a view,” as she likes to say, harkening back to when 50-gallon drums collected rain in the attic. It was so bad she refused to live there for two years during construction.

Jean Barr’s house (left side), upon acquisition in the 1950’s,
front porch since removed 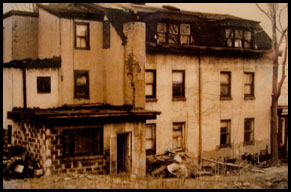 Rear kitchen in the 1950’s,
since removed with addition later attached

“First thing was to put on a roof, then doors and windows,” says Jean, her straight, salt and pepper hair pulled back, wearing slacks and a jade green flannel shirt with a small, embroidered black bison. I was reading the slightest touch of Georgia O’Keefe in her appearance this morning and was a bit puzzled by the cues I was picking up. Without even realizing it, I had already forgotten my mission to figure out the Benedict Arnold/in-law story.

There I was, on an historic house tour in urban Philadelphia seeing my friend with a bison emblem, then pivoting towards a portrait of Chief Joseph of the Nez Perce tribe. In yet another room there was a beautiful, framed landscape print with luminous yellow cornfields enveloped by towering, deep gray storm clouds. ”Most people see the storm coming towards them. I’m an optimist. I see it as going,” says Jean, smiling. All this stuff reminds Jean of her Montana roots. “That’s home to me. I miss the mountains.” Jean’s grandfather, a gold prospector, was a friend of Chief Joseph. Uneducated but extremely bright, her grandfather eventually became involved in the International Workers of the World (IWW) and was a “good socialist,” Jean said with a twinkle in her eye.

With Jean, it’s not just that she’s seen so many things, it’s that she’s transporting to listen to. Her speech has a measured cadence and she has a way of seamlessly connecting one event or person to another that always makes you want to stick around to learn how it all turned out! 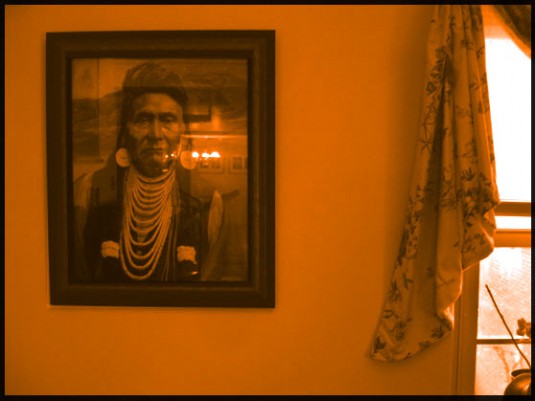 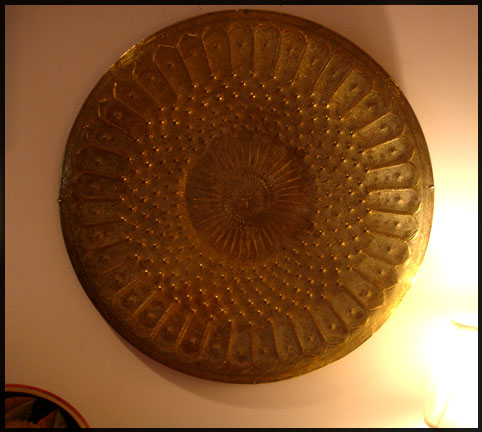 “I never liked history as a subject but I had a marvelous history teacher,” Jean admits. In those days grade school teachers simply weren’t allowed to marry. They had to quit teaching if they wanted to marry so it was a calling not unlike the convent in that sense. Jean’s teacher, Miss Edna C. Mann was an extraordinary lady who, after the age of eighty, rewrote the constitution of the state of Montana. Somehow, with Miss Mann’s guidance, “history began to make sense to me,” said Jean.

At one point, Jean’s father was seeking work and moved the family from Missoula to Saltese, Montana, a town of 104 people. Snows were deep out there and her new teacher, Miss Evans, did a great job of conscripting upper class boys to pick up her younger charges in a sleigh for the trip to school each morning. She also skillfully mixed and matched students’ age levels, challenging them in order to accelerate their learning, overcome weaknesses. To this day, Jean credits her comfort with math to Miss Evans. 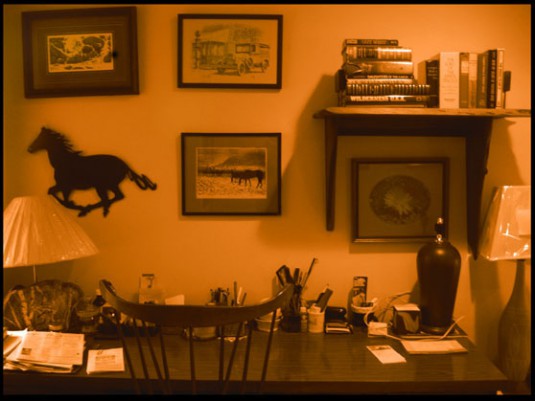 Jean’s childhood memories include playing with Native American children in fields amidst teepee encampments. She shared meals of stew with these families who had located themselves near her town, off reservation, to dig for medicinal bitterroot. Young Jean joined right in the hunt and her parents were just fine with it. To others it was a kind of interracial mixing that was frowned upon to say the least. 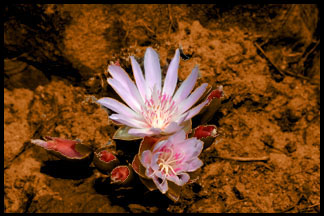 From a culinary perspective, Jean Barr, historic preservationist/activist, now lives just blocks from Jim’s Cheese Steaks, a place where hapless tourists wind around the block for the mysterious (to me) allure of thin-sliced steak, draped with greasy, sauteed onions and dripped with bland, melted cheese on a superfluous, doughy “hoagie” (sub or hero or po’ boy sandwich depending on where you’re from).

In Philadelphia, historic preservation stops at the front door–you can pass through a 1700’s front facade into an Olympic skating rink, we don’t care. We do believe in preservation…of something.
Jean and her husband needed more open space and could not abide a kitchen at 10 ft. 8 in. wide, if that defined the rest of the house. Was it renovation or restoration? All I know is that they did it themselves, dramatically rescuing an historic house from its sorry state, pulling it back from the brink. The kitchen is still the same width but, having been in many too narrow Philadelphia row homes myself, I found Jean’s home pleasant, opening and expanding as it transitions from one floor to the next. 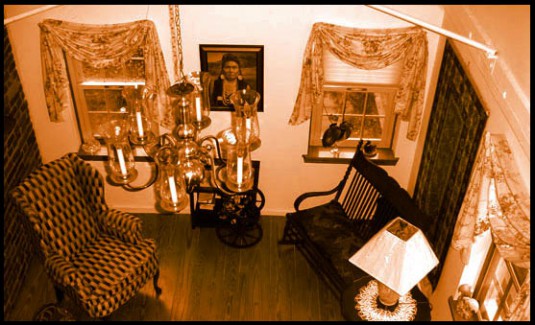 Double height space – bedrooms on the now missing floor were only 7 ft. 8 in. wide.

This evening after the house tour, I attended another historic preservation meeting where Jean was present. Nine people sat by the small, glowing fireplace of the host’s 1832, tight-spaced yet thoughtfully appointed house located on a very narrow, brick paved alley. We sipped wine and strategized about how to celebrate the Southwark neighborhood’s 250th birthday. Jean was very direct with us about the need to meet the challenges of garnering wider participation. She’s been to “boring meetings” for 20 years yet still believes there is important work to be done to preserve architectural history. But if she exhibited an ounce of impatience towards the process I don’t know if anyone else noticed because it was the friendliest kind of impatience there is.

Jean Barr is a community treasure, a truly committed preservationist and concerned citizen. She has put in many hours coaxing others to value their history and historic properties. She has smart ideas and a persistent nature. Her own historic house reflects her two states of mind in one. Outside, a portrait of her Pennsylvania presence. Inside, her Montana soul. 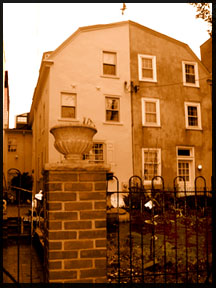