In 2006, professors Dana Cuff and Roger Sherman began a partnership at UCLA’s School of Architecture and Urban Design that eventually became cityLAB. Since then, they have explored several issues that would provide innovative, cost-effective strategies for cities; with an understanding that the success or failure of an architecture project is defined by politics, policy, and finances. They see politics as the interaction between the client and designers, as well as those who are affected by projects: individuals or institutions (municipalities, community-based groups) that are affected and invested in a particular project. Policy dictates the legal parameters within which the project must operate. And while finances may seem to refer only to client solvency, it also refers to a firm’s ability to provide the necessary staff that can bring about the successful completion of the project and weather the vicissitudes of economic instability.

With these overarching issues in mind, cityLAB has delved into some emblematic issues currently faced by individuals and institutions, such as housing issues and revitalizing a modern “village.” While their investigations and interventions are locally based—in California and Westwood Village respectively—they are designed to address issues that transcend local borders. Towards that end, cityLAB has engaged in public outreach through different forums, including museums, conferences, and meetings with municipal governments to share their insights and gather information about people’s concerns and needs. Moreover, in an ambitious project that has just received funding from the Mellon Institute, cityLAB will be initiating a three-year study that will include UCLA professors from different disciplines as well as students investigating the meaning of the Urban Turn as it applies to the Pacific Rim.

One of the projects, Backyard Homes, addresses housing costs and availability without imposing a large footprint. These goals are achieved by using smarter components in structures with a light footprint and will not change the visual landscape of single-family neighborhoods. In essence, says professor Cuff, “there is a wide variety of implementation strategies that can work: Habitat for Humanity can build two houses on every lot where they now build just one; foreclosed properties that receive federal reconstruction loans could add a granny flat; individuals with the wherewithal can build their own backyard home. In the city of Los Angeles, the second units are legal so long as property owners follow the building and planning regulations. cityLAB supports all these ways to provide new housing flexibility, which in turn will support neighborhood stability, affordability, and sustainability.”

The addition of a second housing unit on single-house properties is legal in California. “Our research indicates that the do-it-yourself version of Backyard Homes is already happening, but generally under the legal radar,” Cuff adds. “The legal construction process is just too daunting or expensive for most homeowners to undertake. What we have been developing with Kevin Daly Architects is a beautiful, ecologically super-efficient, inexpensive prototype that could be purchased and installed easily — more like a hot tub or a garden shed than a new house-construction project. Right now we’re working on a flat-pack, cardboard honeycomb system that is quite incredible.” 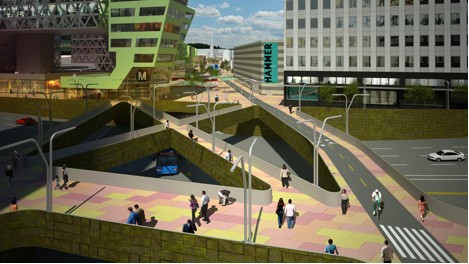 Revitalizing a business district effectively while considering such issue as ecology, economics, and transportation is also on the cityLAB agenda. Here, the approach is to rethink equating car traffic with economic sustainability. As Cuff observes, in Westwood Village, “there is far too much traffic and far too little economic vitality.” Instead, she says, “We think design can be a catalyst for constructive discussion about ways the future might unfold, and what it will deliver for and require from all the various parties – from the councilmember’s office to the business owners, to shoppers and community members. The competition we organized generated two remarkable and distinct visions: one by Neil M. Denari Architects in which the streets were returned to the public domain by limiting auto access; the other by Roger Sherman Architecture and Urban Design with Edwin Chan, exploring how the Village might evolve into a vibrant cultural district.” The ecological issues are addressed by “including more pedestrian activity, more bike accessibility, less traffic congestion and one-stop parking solutions, increased public transit, shared public open space, more literal green – like trees and landscaping, more round-the-clock vitality, and more neighborhood services.”

By proposing progrssive solutions, cityLAB has provided different policy strategies for all stakeholders. Moreover, their strategies incorporate practical considerations for end-users including cost, materials, footprints, and even legal issues.

Expanding on this approach is the  project that will explore architecture from the Urban Turn perspective. Funded by the Andrew W. Mellon Foundation, this three year project, Urban Humanities Initiative, it will investigate the issues of megacities in the Pacific Rim and how their methods for dealing with things like security and identity can be addressed. More importantly, they ask, how can cities of different scales and in different regions of the world learn from them? Towards this end, the project will involve students and professors from different fields to provide a comprehensive, cross-disciplinary understanding. Thus far the fields involved include public policy, urban planning, and architecture, the project will be open to students and professors in every field including economics, political xcience, Asian languages and cultures, law, psychology, and public health. Organized around seminars and studios, including a trip to the target city—which will change each year—the Urban Humanitie Initiative has the potential to provide some useful insights and approaches for effectively reconfiguring cities around the globe.

The work being performed at cityLAB strives to investigate large concepts and how to apply the findings at a local level. The investigations and projects are fascinating. But more importantly, they are grounded in issues that are confronting urban settlements around the world. The goal is to provide solutions that are feasible now. They deserve attention.

Sherin Wing writes on social issues as well as topics in architecture, urbanism, and design. She is a frequent contributor to Archinect, Architect Magazine and other publications. She is also co-author of The Real Architect’s Handbook. She received her PhD from UCLA. Follow Sherin on Twitter at @SherinWing .