Photo: Rafael NgWalking up Chapel Street, in downtown New Haven, an uncannily familiar form becomes visible inside the large windows of Paul Rudolph Hall. There is a massive yellow curve, illuminated like a neon billboard, and it isn’t until you pass directly beneath the entrance to the building that you realize you are looking at […]

Walking up Chapel Street, in downtown New Haven, an uncannily familiar form becomes visible inside the large windows of Paul Rudolph Hall. There is a massive yellow curve, illuminated like a neon billboard, and it isn’t until you pass directly beneath the entrance to the building that you realize you are looking at a full-scale McDonald’s golden arch. People gather on the sidewalk and stare in confusion. An adjacent poster offers clarification: What We Learned, a new exhibition at the Yale School of Architecture, returns Robert Venturi, Denise Scott Brown, and their legendary 1968 Las Vegas studio to Yale for a much-anticipated 40-year reunion.

In the fall of 1968, mere months after rioting students in France protested the pedagogical orthodoxy of higher education, Venturi, Scott Brown, and the late Steven Izenour conducted a travelling studio at Yale, which allowed 13 students from architecture, art, and planning to visit Las Vegas for a research analysis of the Strip. The subsequent book, Learning from Las Vegas, was originally published in 1972 and instigated numerous controversies now recognized as fundamental in the history of postmodern culture. Most audacious were the studio’s case studies; touted by the authors as being “as important to architects and urbanists today as were the studies of medieval Europe and ancient Rome and Greece to earlier generations,” the subjects of inquiry were among the most ‘vulgar’ structures dotting the landscape: gas stations, chain motels, casinos, billboards, fast food eateries, and parking lots. Hybridizing interests in vernacular forms, Pop art, automobile culture, and American social sciences, they forged paradigms whose intrigue seems to proliferate with each new generation of readers.

The show, which opened last week, actually comprises two independent yet dialectic exhibitions: The Las Vegas Studio and The Work of Venturi, Scott Brown and Associates. The former, lining the perimeter of the gallery, displays the photographs taken during the trip as well as surviving student work from the studio. Originating in the Museum im Bellpark in Kriens, Switzerland, under the curatorship of Hilar Stadler and Martino Stierli, this installation reflects its original Swiss context: it is composed as a somber, gridded series of photographs mounted on white mats inside white frames, devoid of any narrative or explanation. It is a modern scaffolding for starkly postmodern material of exquisite depth and richness. This photographic memory of the 1968 Strip is the primary medium for engaging the research of the studio, for virtually everything they documented has been changed or demolished in successive years. 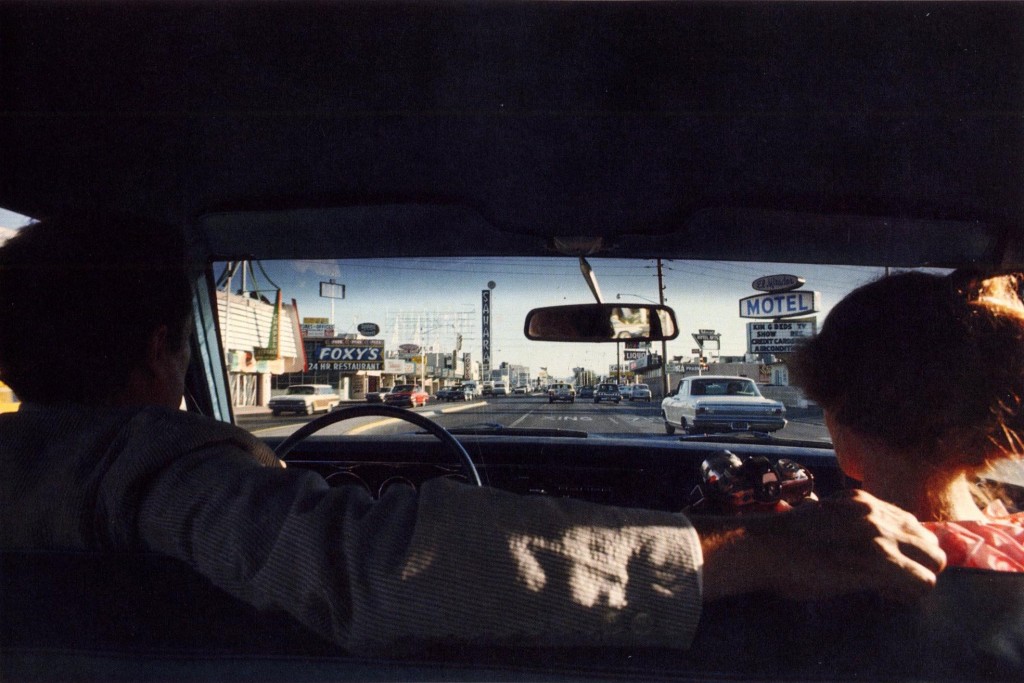 Venturi and Scott Brown in Las Vegas in 1968. Photo: courtesy the Yale School of Architecture

The second exhibition is an original creation, co-authored by the Yale professor Dean Sakamoto and David Sadighian, a Master of Environmental Design candidate. Conceived of as an abridged retrospective of the firm’s work, it fills the center of the gallery with a boisterous amalgam of drawings, models, signage, collages, and films selected for their relationship to the 1968 excursion—a drastic shift from the sobriety at the gallery’s periphery. Five themes from their research on the Strip—Communication, Context, Automobile City, Active Socioplastics, and Mannerism—loosely organize everything. In the spirit of the Venturis’ reappropriation of materials in Las Vegas, the curators used almost exclusively materials that had been previously exhibited or constructed for prior functions. (They were privileged to an archeological dig through the basement archive of VSBA’s Philadelphia office, and sorted through decades of materials to select pieces for the show.) This as-found casualness—once described by Venturi as “Viva vulgarity!”—seems inseparable from the spirit of the firm’s history; during one visit to VSBA, the curators literally pulled the Knoll chairs right out of their conference room and dropped them into the gallery.

The energy that Yale has given to this exhibition, culminating in a three-day symposium in January at which the Venturis will deliver a public lecture, begs the question of the relevance of their theoretical and design oeuvre at this moment in professional and academic circles. Robert A.M. Stern, dean of the architecture school and one of the original “Grays” who aligned himself with Venturi in the now-famous White-Gray polemics of the 1970s, was present at the final studio review for the Las Vegas studio in 1968.  “The marvelous thing about this exhibition is that it opens this material to entirely new generations of architects and students who have looked back at a historical artifact and want to connect with it,” Stern says. “This is material written by leading figures of our time who are still with us today, and it is exciting to bring fresh eyes to this practice and discourse. Bob and Denise are not simply professors of architecture—they are teachers to all professions.”

The title What We Learned might imply that clear lessons can be delineated from the studio’s research. The work of the Venturis does not have a closed arc but a trajectory; the passive voice of the show’s title is meant to acknowledge the homecoming party of the Venturis at Yale, not to imply that their findings are either finite or universally conclusive. Scott Brown recalls her early frustrations when shocked architects would challenge them to summarize precisely what they learned from Las Vegas: “Our first, perhaps over-aggressive response was, ‘What did you learn from the Parthenon? You mean you can’t put it into words? Well, maybe we can’t either.’ ”

There is poignant ambiguity in the “We” in the exhibition’s title. Certainly, the 13 students who travelled to the Strip in 1968 helped co-author one of the most significant phenomena in postmodern architectural theory. For the Venturis, this studio was clearly a profound milestone in their own academic and professional endeavors. But the “We” is also broader, more inclusive: It reminds us that generations of students and professionals to the present day continue to be inspired by the legacy of the Venturis and the myriad unanswered questions that their work has probed.

Matthew Zych is a graduate student in the Yale School of Architecture.