An outdoor art project draws attention to the High Line.

If trash and graffiti were the fabric of great monuments, the New York High Line would overpower the Statue of Liberty. Undergoing a massive facelift, though, the structure is sure to attract crowds of its own. Three years ago, the nonprofit Friends of the High Line began a project to transform this mile-and-a-half-long section of elevated train tracks from the 1930s into a public park overlooking the Hudson River. The first segment will open at the end of this year, extending from Gansevoort Street to 20th Street with entrances on Gansevoort, 14th and 18th Streets. 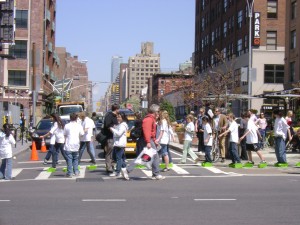 The students shuffled their way to future entrances of the park, leaving a trail of chalk behind them. With choreographed movements, the chalkers drew arrows, spirals, and amorphous squiggles along the way, engaging and directing passersby. 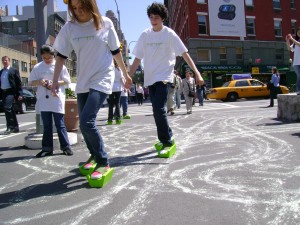 The chalk shoes were designed by Mandle, who approached Friends of the High Line with the idea. The artist described the project as seeking to “create moments that allow audiences to pause and heighten their perception of everyday environments, just as the park promises to reveal a new perspective of the city.” The students wore T-shirts that reinforced this aim, with “Chalk Shoes to the High Line” printed on the front, and the students’ own words of wisdom written in marker on the back, like “Slow down and appreciate.” It was hard not to, in fact, as oncoming pedestrians were trapped in a sea of 14-year olds cross-country skiing across uneven sidewalks in chalk shoes. 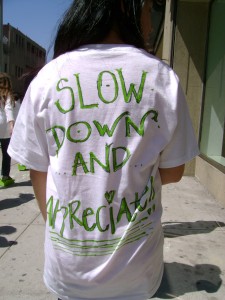 The shoes worn last week will be on display in stores and restaurants throughout Chelsea and the Meatpacking districts through May 15. 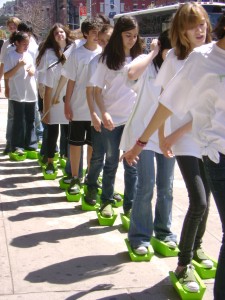 Read more about the founders of the Friends of the High Line as well as projects associated with the endeavor on Metropolismag.com.