What If Buying a House Were More Like Buying a Car?

Architects recognize that modern families care about the environment and aesthetics.

What if a design/build firm behaved more like a tech start-up? What if its founders modeled their process of design, manufacture, testing, and sales on the auto industry, rather than the building industry? That company might look something like Acre, the brainchild of designers Jennifer and Andrew Dickson (who are married) and builder Don Newman. On September 11, they launched an Indiegogo campaign (and corporate fund-raising drive) to create the prototype of their model of well designed, reasonably priced (around $220,000), net-zero, mass-produced housing. That price doesn’t include the site, and their site is ideal for high visibility for a new concept: They are located in the “start-up village” area of Kansas City that is the first neighborhood in the world to benefit from Google Fiber.

The Dicksons hope to complete the house next summer, after which they (and their two kids) will live in it for 18 months. Throughout that period, they will work with dozens of monitoring systems to measure and track use patterns, energy efficiency, and many other factors. The Acre team plans to offer a half dozen plans as a package with materials and technologies “bundled in.” Their ultimate goal is to license those packages through a network of builders nationwide. “That network would then be involved in training and innovating the next round of products.” 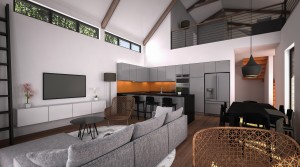 The internal view of the prototype NetZero home, which is designed to produce as much energy as it consumes.

According to Jennifer Dickson, Chief Design Officer, “We want to revolutionize the home-building industry and make beautifully designed, net-zero homes affordable for people nationwide.” They are hardly the first ambitious young designers and builders to see a need for change in the homebuilding industry—a sector based on outdated business models and known for intractability. “We see no reason why architect-designed, highly efficient housing should not be attainable at a reasonable price point,” she says. “To do that, we are treating this more like a car than a house. With cars, the design effort goes in at the front end, and at the purchase end, the customers do not get a custom product, but they get access to high-end finishes and their choice of features. We think we can leverage buying power by providing a set of well-designed packages.”

An 1,800-square-foot, four-bedroom, two-bath Acre home in Kansas City will cost approximately $225,000, including materials, labor, appliances, solar panels—pretty much everything but the land on which it sits. One of Acre’s key innovations is its pre-engineered, panelized construction for walls and roof—an efficient system that goes up in a few days. But they know that the real affordability factory will require scale, so the company is partnering with material suppliers and builders nationwide.

According to the Department of Energy, there are only about 600 (officially) net zero homes in the U.S., and none of these are in Kansas City. Most of the aggressive sustainable design solutions in the commercial and residential markets are on the coasts and in temperate climates. So what’s the weather-extreme- and conservative-mindset-Midwest market for net-zero? “We thought this would be a big first question,” Jennifer says, “but we have not gotten push back on that at all. We’ve done a lot of modeling, but performance will be everything. Nothing like testing these systems in the Midwest, where we have hot, humid, and long summers, and very cold, snowy winters as well.” 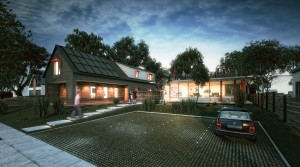 Acre Designs is focusing on quality and aesthetics as much as the environment and financial freedom in their Axiom House project.

The Axiom house will include extensive home automation feature, contemporary design, and will go from ground-breaking to occupancy in a few months. The prototype, set for completion in summer 2016, is meant to demonstrate Acre’s construction processes, raise awareness about “green living” through public tours; and serve as a living laboratory for the home’s systems.

That’s an element that has the Acre team working with manufacturers, who see this kind of transparent testing and feedback as a tremendous opportunity to harvest data. For Acre, it means a change to road-test features—the highest performing systems will become standard for their models.

Once the Axiom House is finished, the company will focus on building NetZero homes in the Kansas City market and rollout to several additional cities across the nation in 2017. Where that happens will be based on where the company gets the greatest Indiegogo support.

Chad Jackson, who is director of Kansas State University’s Center for the Advancement of Entrepreneurship, has watched the Acre process unfold and offers this observation: “They are poised to disrupt the new home construction industry with their innovative business model, first-in-class management team, and visionary approach for how we can all live in more stylish, energy efficient and affordable homes.”

“We are redefining the American home for families across the country, starting with the Axiom House.  The modern family cares about quality and aesthetics as much as the environment and financial freedom,” says Acre CEO Andrew Dickson.