What’s Next for Airbnb’s Innovation and Design Studio

“Samara” is leveraging the apartment sharing site’s community for good works—from boosting the economy of a Japanese town to providing pathways to legal work for refugees in Jordan. 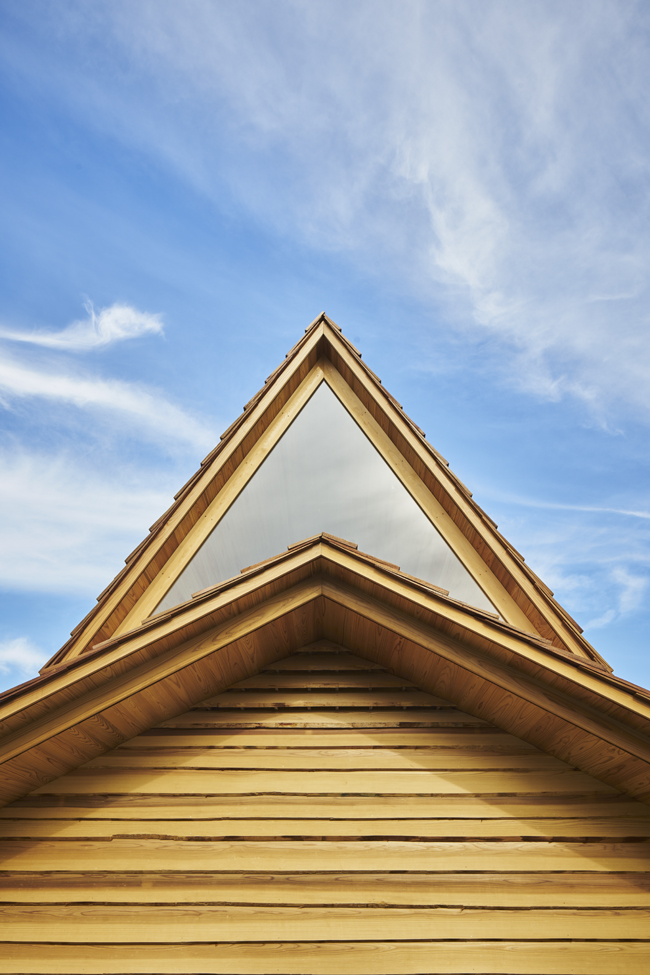 The first project by Airbnb’s new design studio, Yoshino Cedar House, which debuted at the House Vision 2 exhibition in Tokyo, is made of 28 types of locally available cedar and constructed by craftsmen and carpenters from the town of Yoshino. After being reinstalled permanently on a plot of land donated by the town, it will be listed on the Airbnb site for guests to stay at.

This past August, Joe Gebbia, Airbnb’s cofounder and chief product officer, was in Japan to launch a new project, the Yoshino Cedar House, designed and built for Kenya Hara’s House Vision 2 exhibition in Tokyo. The show featured futuristic house prototypes, and Airbnb was the only Western company invited to participate. It partnered with the talented Tokyo-based residential architect Go Hasegawa to design a long gable-roofed house that will later be permanently installed along the river in Yoshino, a town in Japan’s Nara prefecture.

While other prototypes in House Vision 2 provided glimpses into how digital technology will influence the smart home, for Gebbia that is a foregone conclusion: “Homes will be smarter and more intelligent. We don’t need to advance that. It’s going to happen on its own,” he says. “What’s not going to be advanced unless we provoke it is the future of the guest-host relationship as facilitated by architecture.” Ten years ago, no one could have predicted people would be sharing homes at the rate they are today, he says. (Over a million people sleep in Airbnbs all over the world each night.) “Homes weren’t designed for this, but what if they were? What would that look like?”

Designed in response to the huge problems of Japan’s aging population as well as the outward migration of young people from rural areas like Yoshino, the Cedar House is a way to merge a community center (downstairs) and a guesthouse (upstairs), resulting in a bookable Airbnb property that is managed by the village. Proceeds earned from the guests who stay at the house will be used to strengthen the cultural legacy and future of the area.

The Yoshino House is an important experiment for Airbnb because it is the first project to come out of Samara, a new multidisciplinary innovation and design studio conceived by Gebbia with the support of Airbnb cofounders Brian Chesky and Nathan Blecharczyk. “We care so much about creating a brand that has longevity to it, we decided it was time to create a space to do just that,” Gebbia says, “one that was untethered from the constraints of the day-to-day, one that could have the space to take big risks and fail on some of them.”

Samara brings together design and engineering experts from within the company to chart new territories for the Airbnb community. “We planted a seed in 2008 that’s grown into this incredible tree that has global roots in 191 countries” says Gebbia, referring to the company’s founding. “No tree survives, nor does it become a forest, if it doesn’t plant more seeds around itself. We’ve created Samara to be the internal design studio to put more seeds out there. We hope that our ideas take us far from the tree.” 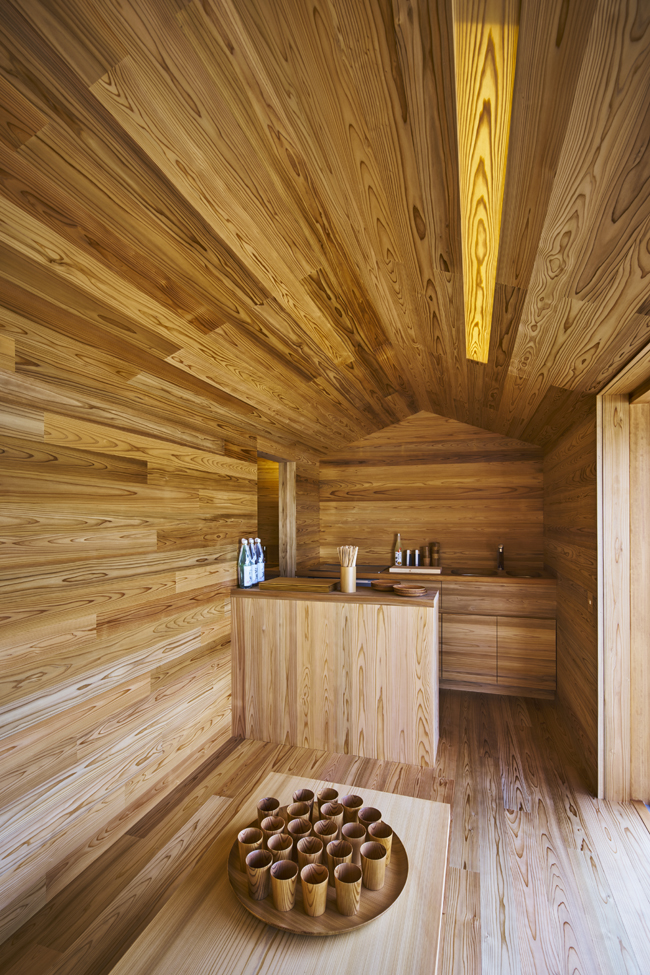 The ground floor of the house is a community space with a long dining table for family-style meals with locals and guests alike.

House Vision 2 was the first step. The Yoshino House is a quintessential example of the type of project that would get rejected unless it could be supported by Samara, Gebbia says. Increasingly, Airbnb guests want to feel like they actually live in the places they visit, and the fastest way to facilitate that is to connect them with locals—which is what the House Vision project was all about. On the other hand, the Yoshino Cedar House imagines the entire town as a host, bringing the community together in an activity that helps solve a local problem of the need for economic stimulus. “Here, we’ve found a way to create a pathway for different parts of our community to help support each other, and happens to be a piece of architecture.”

The inclusion of handcrafted objects by local artisans, as well as the bottles of sake that are made by the sake brewery in Yoshino, points to an opportunity for Airbnb to market local makers on a wider scale. “We know that the community is rich with makers, artisans, and craftsmen,” Gebbia says. “Right now, there’s no way for any maker in our community to get their creations to anybody else in Airbnb.”

On a broader scale, Samara hopes to play a role in helping to alleviate the refugee crisis. The UN currently estimates that there are more than 65 million displaced people in the world—and that number is projected to balloon to 350 million by 2044, primarily because of conflict and climate change. Over the past year, Airbnb has worked with UNHCR and nongovernmental organizations (NGOs) like Mercy Corps, and the International Rescue Committee to develop ways to house refugees in need. Hundreds of relief workers serving on the front lines in communities throughout Greece and Serbia have stayed in Airbnb lodgings through the company’s philanthropic travel credit program. The company also recently announced that it is a partner in the White House’s call to action for private-sector engagement in this cause.

This fall the company began beta testing Experience Amman, an online marketplace that connects travelers with locals in Amman, Jordan. In collaboration with organizations in the city, Airbnb will support and train both recently settled refugees and underemployed Jordanians to become local hosts who offer unique and memorable experiences. The idea is to provide not only financial security but also a legal pathway to work permits for many of the city’s refugee families.

A lot of the groups involved in the refugee crisis understand the problems really well, but rarely have access to software engineering or design talent. “What would happen if you brought those two worlds together?” Gebbia asks. “What would happen if you took some of the top engineers in Silicon Valley and paired them with some of the NGOs and nonprofits working on this issue?” Closer to home, Airbnb is testing a pilot program at the International Rescue Committee’s Reception and Placement center in Oakland, California, which it hopes to scale up nationwide—soon hosts will be able to opt in and offer their homes to refugee families in need of temporary housing.

While Airbnb is frequently hailed as a disrupter in the hospitality field, the potential of Samara combined with the company’s core belief in community could have revolutionary implications well beyond short-term lodging. For Gebbia, it comes down to a fundamental belief that he calls enlightened empathy. It involves “understanding who you’re designing for, combined with your own unique point of view of the world as a designer, in order to birth a new idea or a process that can apply to a physical product, a website, a mobile app, the Yoshino Cedar House, a community marketplace,” he says. “I’m making a bet that’s going to apply to refugees.” 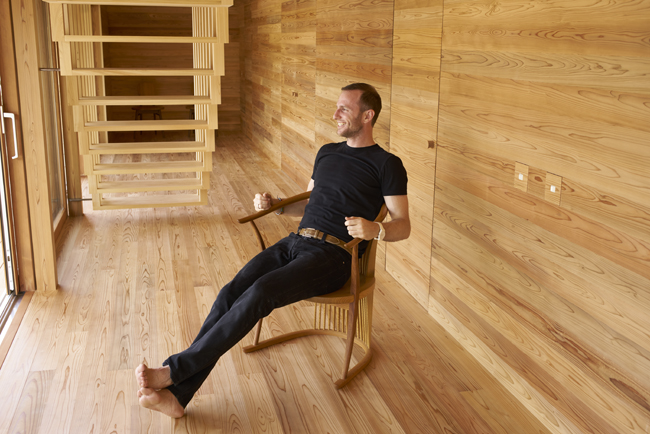 Airbnb cofounder and chief product officer Joe Gebbia sits in a chair made by a Yoshino craftsman using local wood. 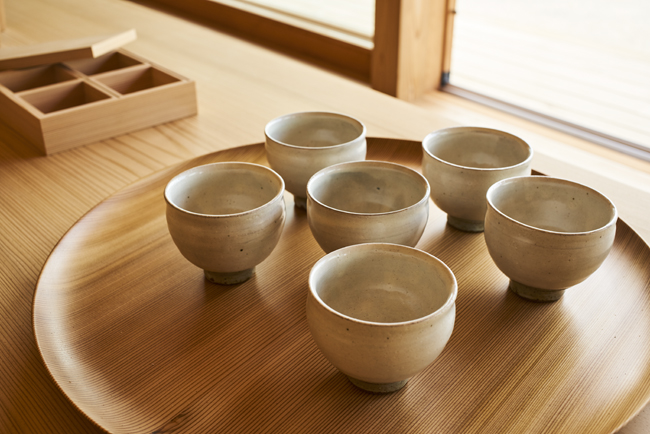 Yunomi cups are made by Yoshino artisans. 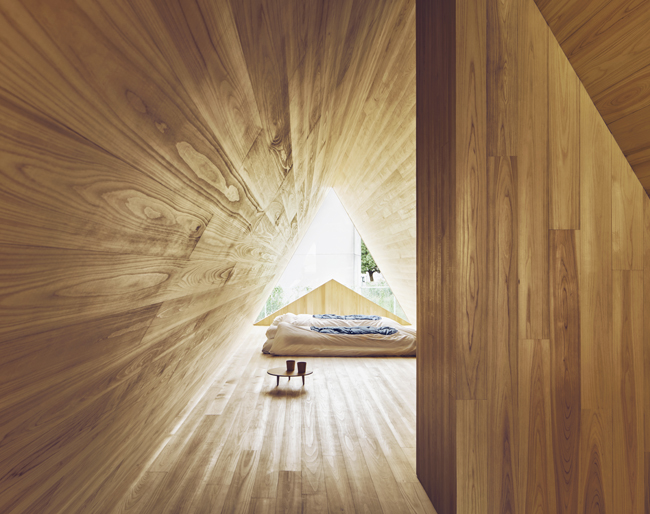 The upper floor is a rentable space where guests can sleep on futons, with a west-facing space for relaxation and an east-facing room for watching the sunset. The small round table, lighting fixtures (below), and tableware such as sake vessels and yunomi cups are made from local cedar and cypress wood. 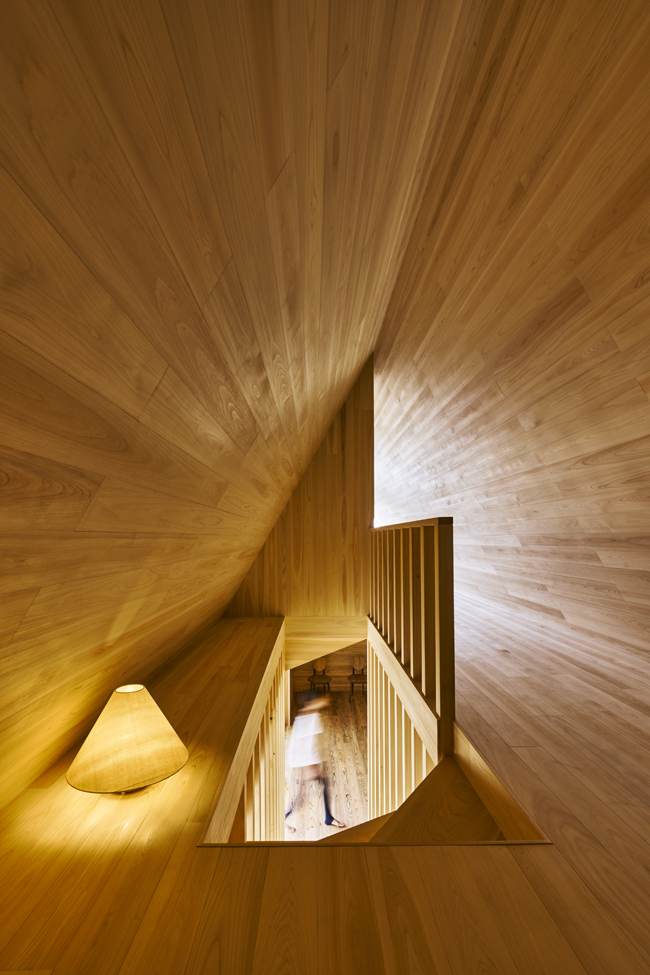