Who Really Benefits From Central Park?

Central Park is lauded as one of New York’s greatest urban achievements, but whom does it actually serve?

A strange paradox confronts New York City. Economic statistics indicate that Manhattan has levels of economic exclusion comparable to South Africa. Yet the city retains world-class common spaces that improve overall quality of life while sustaining pedestrian diversity. Who benefits the most from non-excludable zones? The answer is complicated. A perusal of my own Upper East Side neighborhood, which is near to Central Park, demonstrates the tension between public accessibility and latter-day segregation.

The Upper East Side feels straight from the new urbanist playbook, even if it more or less prefigured it. Pedestrians can seamlessly navigate a rational order of gridded streets as we could in few other American cities, with all the virtues that flow from enlightened planning. Sharp edges and straight lines convey an orderly repetition along the way, maximizing commercial efficiency. My own block comfortably houses more than 1,600 people in relatively close confines alongside an array of businesses. Deliberately boring buildings give life to daily routine without any unnecessary disruptions.

The sidewalk tableau confidently renders the city’s place at the top of the cosmopolitan order of things. Workers file into the shops, restaurants, and grocers providing the myriad forms of labor that animate this part of the city. They speak many of the 800 languages thought to exist in New York. Yet the illusion of inclusivity melts into separatism by bedtime. Granular data provided by the CUNY Center for Urban Research show that permanent residents on my block are more than 80 percent white, comparable to a cross-section of Wichita, Kansas (about 72 percent white). This is not much different from the rest of the Upper East Side.

Segregation driven by overarching economic forces can be taken as a given in market society, provoking far less outrage than actual physical barriers might, but it is real nonetheless. From the East 77th Street subway stop that serves as the gateway to the district, workers enter a census tract with a median household income of $168,000. (Note: see the New Yorker’s helpful infographic about wealth inequality and New York’s subway lines.) Residents of the outer boroughs and beyond make this community desirable, but few can partake fully in the environment they’re working to cultivate.

Central Park is the focal point of the district, and a study in accessibility. Each day it ushers thousands of relieved pedestrians out of the staid grid and into a brilliantly illogical world of odd statues and meandering forests. This crown jewel of urban design brings a level of elegance to daily life unmatched by most of the privatized no-go zones in gated suburbia, and is for the most part open to all. While inner cities inflict palpable restrictions on vagrancy and political action, they can’t easily enclose whole streets, sidewalks or parks the way suburbs can. Nor would they typically want to, because common spaces generate economic activity. 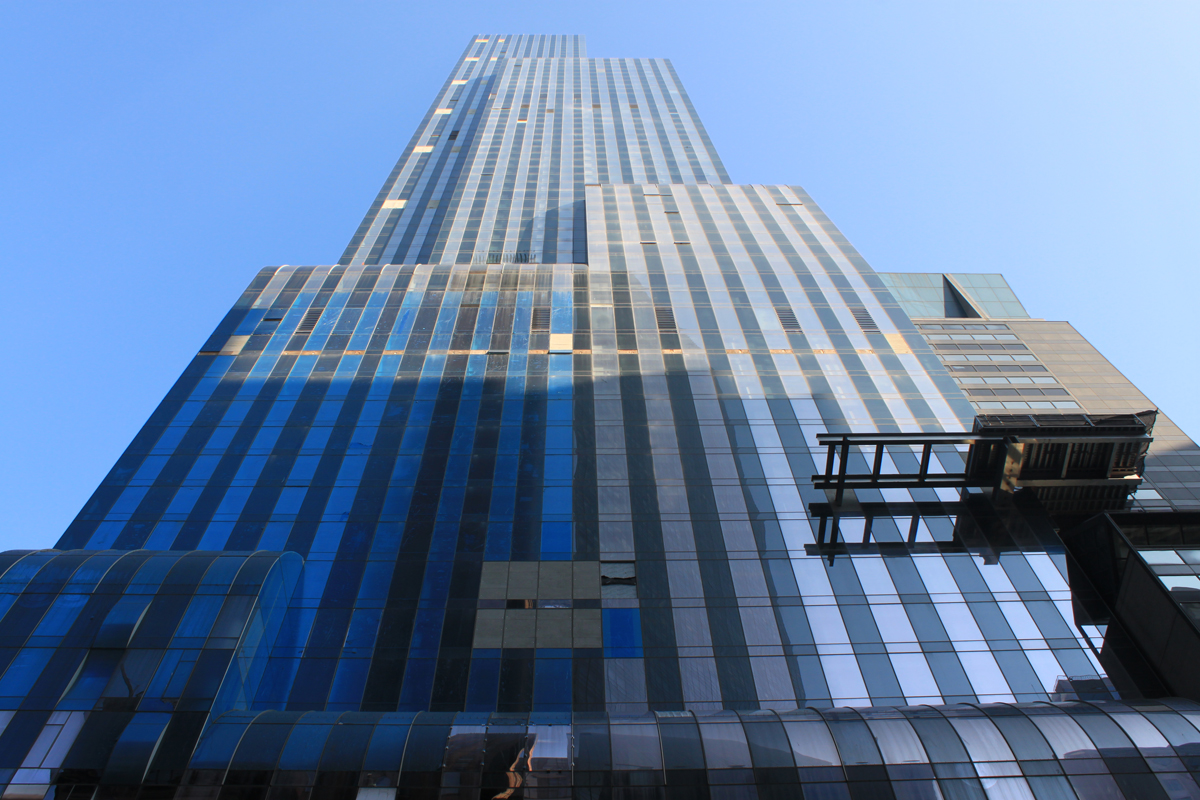 One57 will become the tallest residential skyscraper in the Western hemisphere, featuring aerial views of Central Park while casting a long shadow over it.

Central Park’s principle designer Frederick Law Olmsted boasted that his magnum opus served to increase citywide real estate values, augmenting many a private fortune. In fact properties adjacent to the park appreciated by 1,000 percent in just five years after its construction. To this day the park creates ever increasing wealth for a few well positioned property owners. The rest of us can only gaze at the $90 million park view penthouses changing hands on 57th Street’s so-called billionaires’ row.

Not coincidentally Central Park has been well maintained during the profit-driven Bloomberg years. This greatly benefits casual users of the park alongside the landed interests whose investment portfolios are intimately tied to the park’s allure. The Central Park Conservancy, increasingly cash flush in recent years, has become an instructive model of privatized space management in contemporary New York. Its stewardship was a harbinger of ample financial backing during years of public sector divestiture in parks.

On the other hand unelected philanthropists now influence decisions over public spaces according to shrewd corporate logic. The “dust bowl” that was Central Park in the 70s underwent robust renovation, leaving poorer parks behind as public budgets ebbed. Meanwhile unpaid volunteers fill the breach in Central Park’s labor force. This comes as many New Yorkers yearn for something called a salary.

The third world allusion used above only goes so far. For example New York has 26.4 square meters of open space per person compared with 1.1 square meters in Mumbai. How we manage this urban ecosystem is one factor in the inequality equation.

Joshua K. Leon is an assistant professor of Political Science and International Studies at Iona College, where he teaches a course about urban ecologies. His has written on cities for Dissent, Metropolis, Brooklyn Rail, Next City, and Cities, among other publications. His forthcoming book is called “The Rise of Global Health” (SUNY Press)