Codified within the Group Areas Act of 1950, the apartheid era government forced Johannesburg’s ethnic populations to reside across large distances, fragmenting the city along racial lines that were purposely reinforced by geography — mine dumps, streams, ravines, and open scrubland. Movement across the city was highly restricted, transportation options were extremely limited, and almost all job opportunities required commutes of great distances, high costs, and exceedingly long duration. Without the provision of adequate traditional public transport, South Africa’s citizens improvised by inventing the Kombi Taxi, which emerged in the late 1970’s to move the city’s population across the isolated townships. It quickly ballooned to accommodate over 70% of all public transportation rides.

Kombis combine the characteristics of both buses and cabs. Similar to a traditional bus system, the Kombis maintain loosely set routes and charge fixed fares. Acting more like a taxi, they stop anywhere, respond to changing traffic conditions, operate in response to demand rather than fixed timetables, and work with smaller, more intimate vehicles. Nonetheless, the Kombi’s most important characteristic is that they move Johannesburg’s commuters at smaller costs that any government subsidized transport. Their performance impacts the vast majority of citizens. While the Kombi’s advantages are their lack of regulation or provision of large-scale, dedicated infrastructure, the ad hoc nature of the industry is also responsible for it largest problems — that of safety and organization. 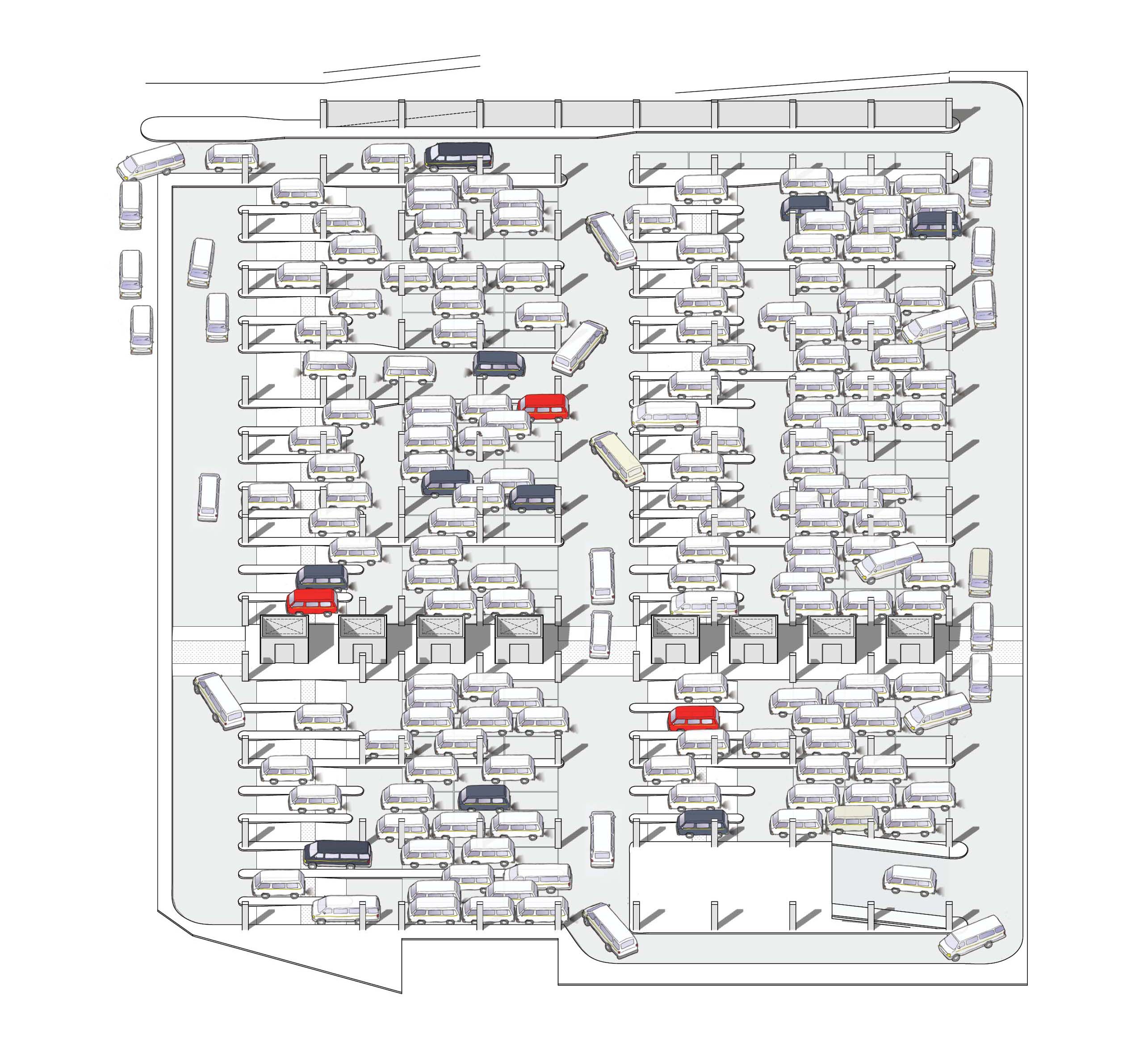 Kombis have a notorious reputation for fatal crashes and are a constant source of irritation for other drivers and pedestrians. Furthermore, rivaling taxi owners have historically grouped together into “Taxi Associations” that ruthlessly control their routes. Differences between these factions have often resulted in violence and gang warfare.

With the fall of the apartheid system, the local government has begun to acknowledge and support the role of the Kombi in the lives of Johannesburg’s citizens. After many failed policies to reign in and regulate the industry, the city now sees the provision and control of central taxi ranks – architecture – as the way to provide a degree of order, coherence, and formality to the entire system. Large taxi ranks have been constructed at strategic points across the city, often providing spaces for the informal traders who had set up stands at these points of activity.

The seemingly intangible, shifting system of Kombis has a physical presence and dignity; in order to use the facility, taxi associations and their drivers have to meet certain safety requirements. However, many taxi associations still refuse to use the new ranks due to the small fees charged by the city for use of the rank, choosing to use unused areas just outside the rank – vacant lots, under overpasses, etc. This reveals major rifts and tenuous a relationship between the Johannesburg municipal government and the various taxi associations, ultimately leaving commuters stranded. In this sprawling city, the ability of citizens to move with ease from one area to the next, in search of economic opportunities or recreation, is vital to their wellbeing. Furthermore, the ability to physically unite an extremely fractured, segmented city has the ability to enhance everyone’s stake in the city. 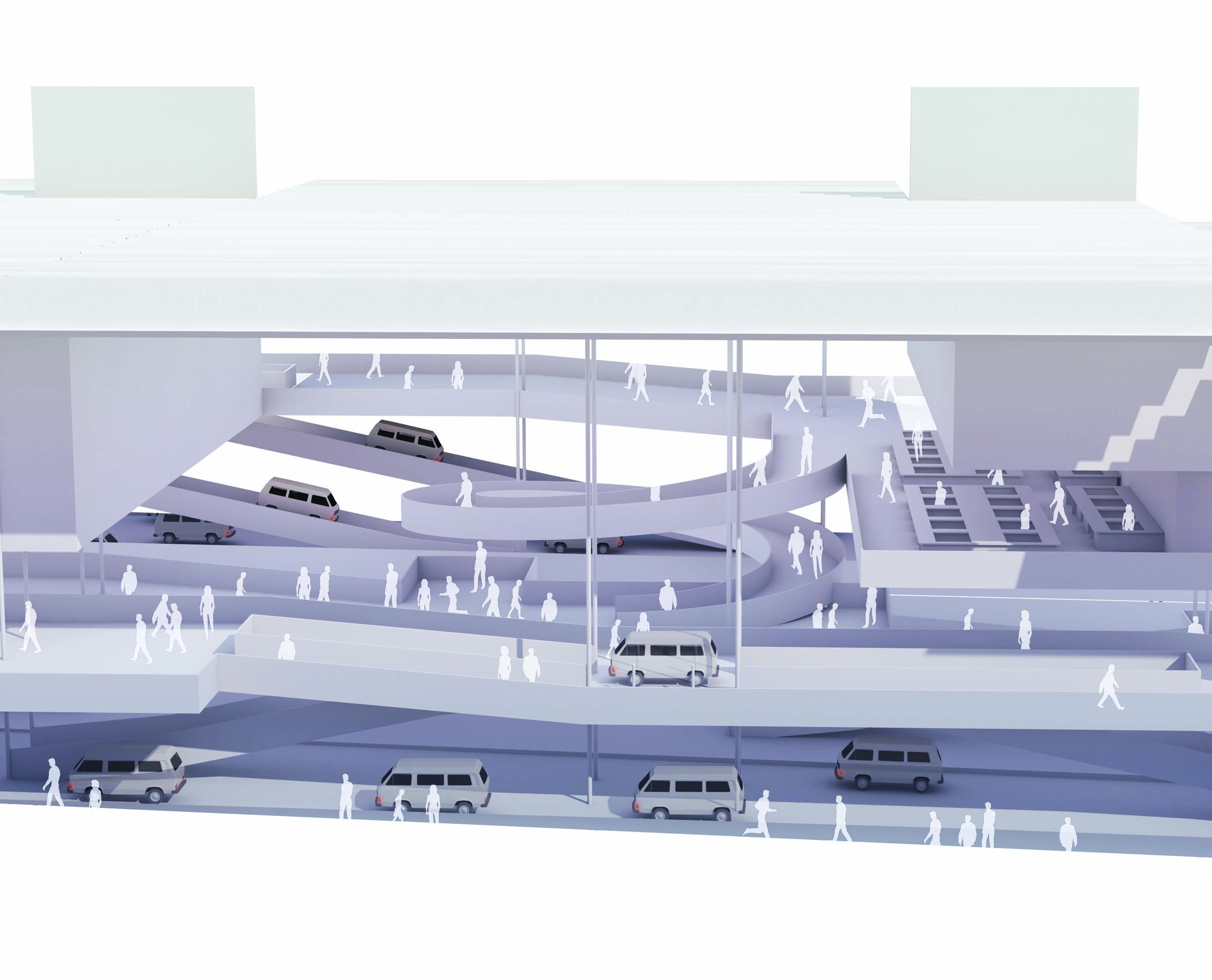 Located opposite the Chris Hani Baragwanath Hospital and Potchefstroom Road — the main arterial into Soweto — the Bara Taxi rank is the largest in Johannesburg and acts as the gateway between Soweto and the rest of the metropolitan area. All Soweto taxis converge here.

My project rethinks the role of the Bara taxi rank, understanding that the qualities and experiences of this space play a critical part in the daily lives of Soweto’s citizens. Every day, over 70% of commuters pass through Bara and the workings of the rank provide opportunities for urban experiences other than just transportation. Designed as a mediating point between formal and informal activity, this hybrid space provides transport, trade, social interaction, education, health, and a moment of density and urbanity within the sprawl of Soweto.

While many of Johannesburg’s new taxi ranks provide multiple programs other than transportation, they are consistently segregated and isolated from the loading and queueing areas, thus they’re distinct from the main reason for the user’s presence – they are secondary add-ons. This rank will provide the typical program — ranking, loading, and drop off spaces — as well as “drive-thru” clinics, recreation opportunities, a market, an assembly hall for the South African National Taxi Council, training and servicing spaces, maintenance facilities, and a driver’s club.

This range of programs will be entwined into a new, thick, composite structure. An efficient matrix of loading and unloading routes is expanded and weaved (in all dimensions) with passenger circulation, markets, health and recreation programs. By using the ability of the taxis to accommodate sectional movement, the rank will simultaneously provide an efficient, oriented means of transfer from taxi to taxi and access to vital programs in a dense, interactive environment. Additionally, as a main mode of access to the Baragwanath Hospital, the project will use the opportunity to reorganize the hospital’s entrance sequence. The existing crowded bridge will be expanded, and small scale waiting spaces will be intermixed with the required areas for the flow of people in and out of the complex. Circulation will accommodate and orient movement to the rank, the arrival and exit of private vehicles, and the arrival of emergency vehicles. The new space will provide an entrance to the complex that is fitting to the importance of the hospital and to the seriousness of the events within.

Thomas Heltzel, LEED AP, is a designer at MOS Architects in New York City. He has previously worked at the Renzo Piano Building Workshop in Paris and Behnisch Architekten in Los Angeles. He holds a B.A. in Architecture from Miami University (OH) and a Masters of Architecture from Columbia University, GSAPP where he received the Lucile Smyser Lowenfish Prize and the American Institutes of Architect’s Certificate.