Designed with input from surveys and focus groups, HDR’s Minneapolis office stands as a first-hand experiment for the firm’s evidence-based design process.

Above all else, global architecture and engineering firm HDR values the importance of teamwork and collaboration—not simply as the core of its creative process, but as a visible element of its designs. And so when HDR decided to relocate its Twin Cities architecture studio to a new location, it had one basic concept in mind: “Start by listening.” Designed with input from surveys and focus groups, this office stands as a first-hand experiment for HDR’s evidence-based design process.

Its old location, in St. Paul, was more of a traditional workspace: six foot cubicles divided the office and the seat assignments suggested a level of rigidity in the style of work. With its relocation to downtown Minneapolis, the Twin Cities management team decided to create a space that fostered flexibility and communication among staff, with an open concept design and a lack of assigned seating as key features.

Twin Cities Design principal Mike Rodriguez recalls a meeting early on in this process: “We pulled everyone together and said, bring in images of what you want the office to be. Someone put an image of an old architecture studio from the ‘20s.” That photo seemed symbolic of a certain kind of workplace that placed discussion as an integral component.

To create this space, architect Tina Vasinda and researcher Bethany Friedow spearheaded a comprehensive study that relied on both qualitative and quantitative data in the form of focus groups and surveys that were circulated among the studio’s employees. The goal of the focus groups, Friedow explains, is to “understand more deeply what issues they were having in the current space, what was really working well and what people were anxious or excited about.” The survey, she says, confirmed that those concerns that arose among focus groups were office-wide concerns. The next step was to tailor the office–everything from its decor to its layout–to employee preference as much as possible, without “over-designing.”

Now that the transition to the new space in Minneapolis is almost at its sixth-month mark, a new survey will be taken. Rodriguez, Vasinda, and Friedow all emphasize the importance of living in this space and figuring out what really functions and what needs work. That’s a process, they say, that they’ll continue over time. 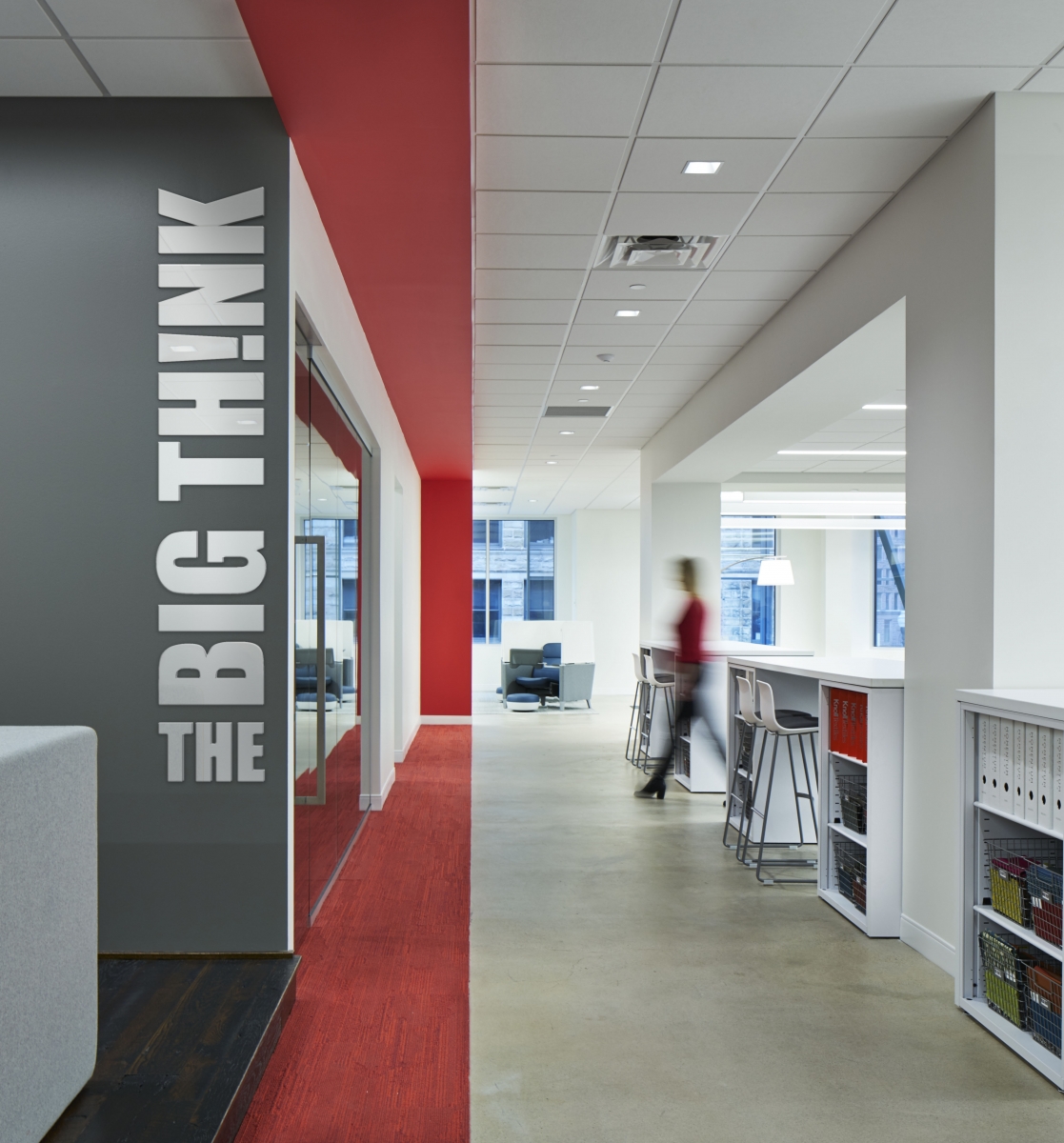 “The flexibility of the space is really great too,” Vasinda says. “The front room that we have, which we call the ‘Big-Think’ is kind of like a big open conference or meeting space and we’ve configured that in, I don’t even know how many ways.” 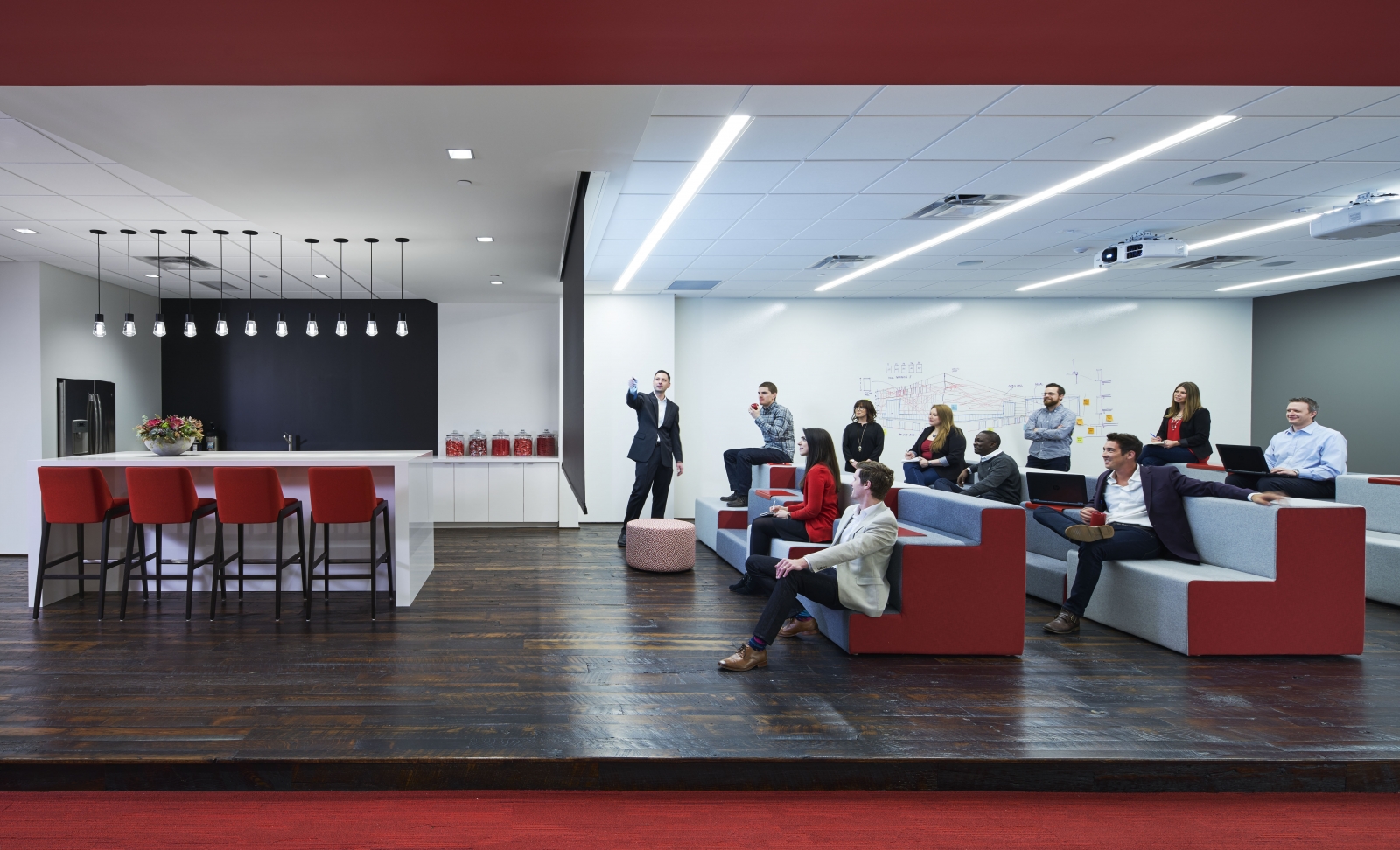 Praising its flexibility (it’s a large, open space equipped with two projector screens and whiteboard walls), Vasinda explained that the “Big-Think” caters to all types of interactions, whether formal meetings among staff or with clients, even March Madness gatherings. 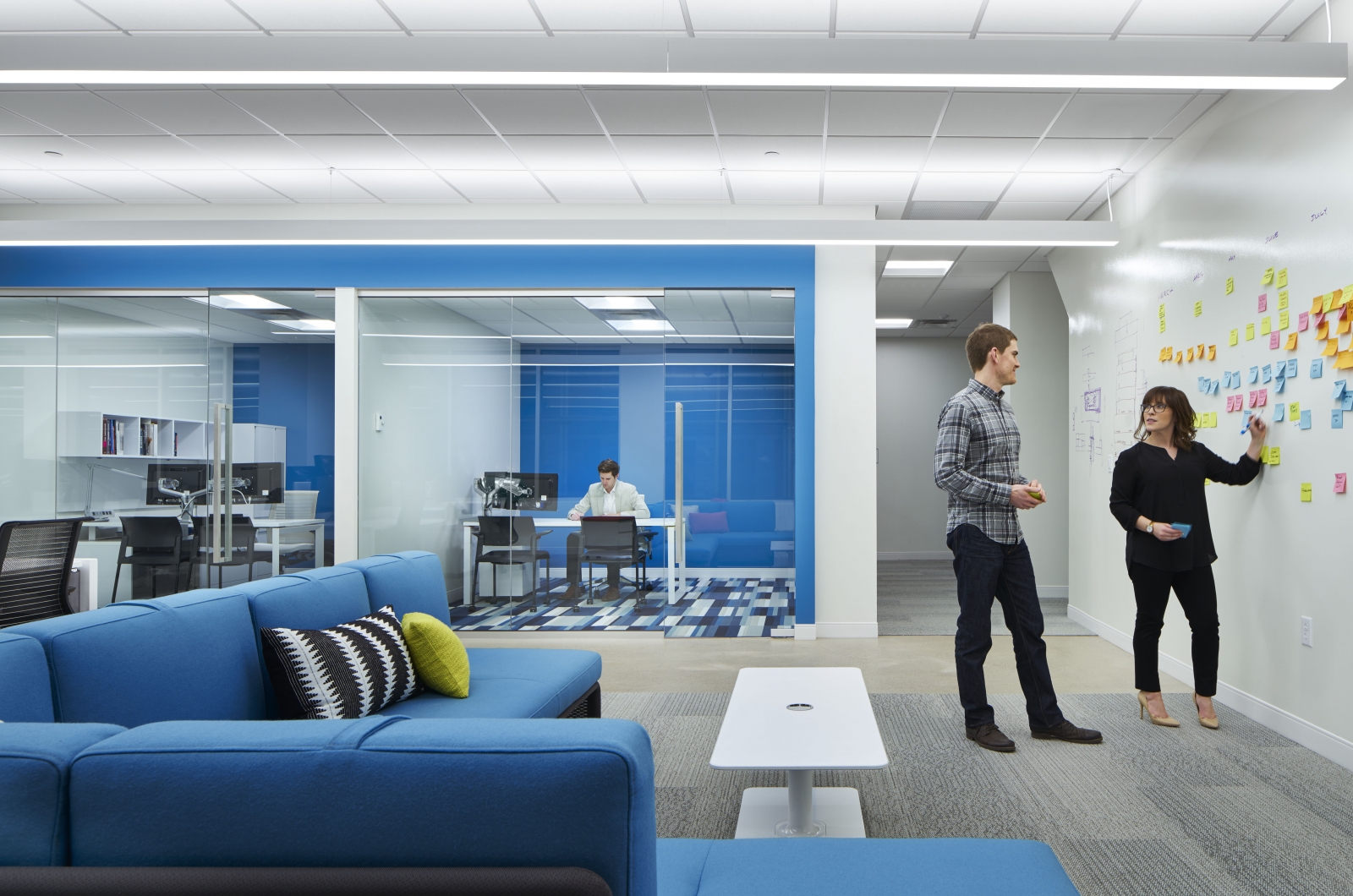 Rodriguez never expected how much use HDR’s couch areas would get; in the winter, he says, people bring blankets and laptops and get to work in these lounge-like spaces. “We get use out of the non-traditional table space. People go into other spaces quite often. We were hoping that would happen, but I didn’t think it would happen as much as it really does.” 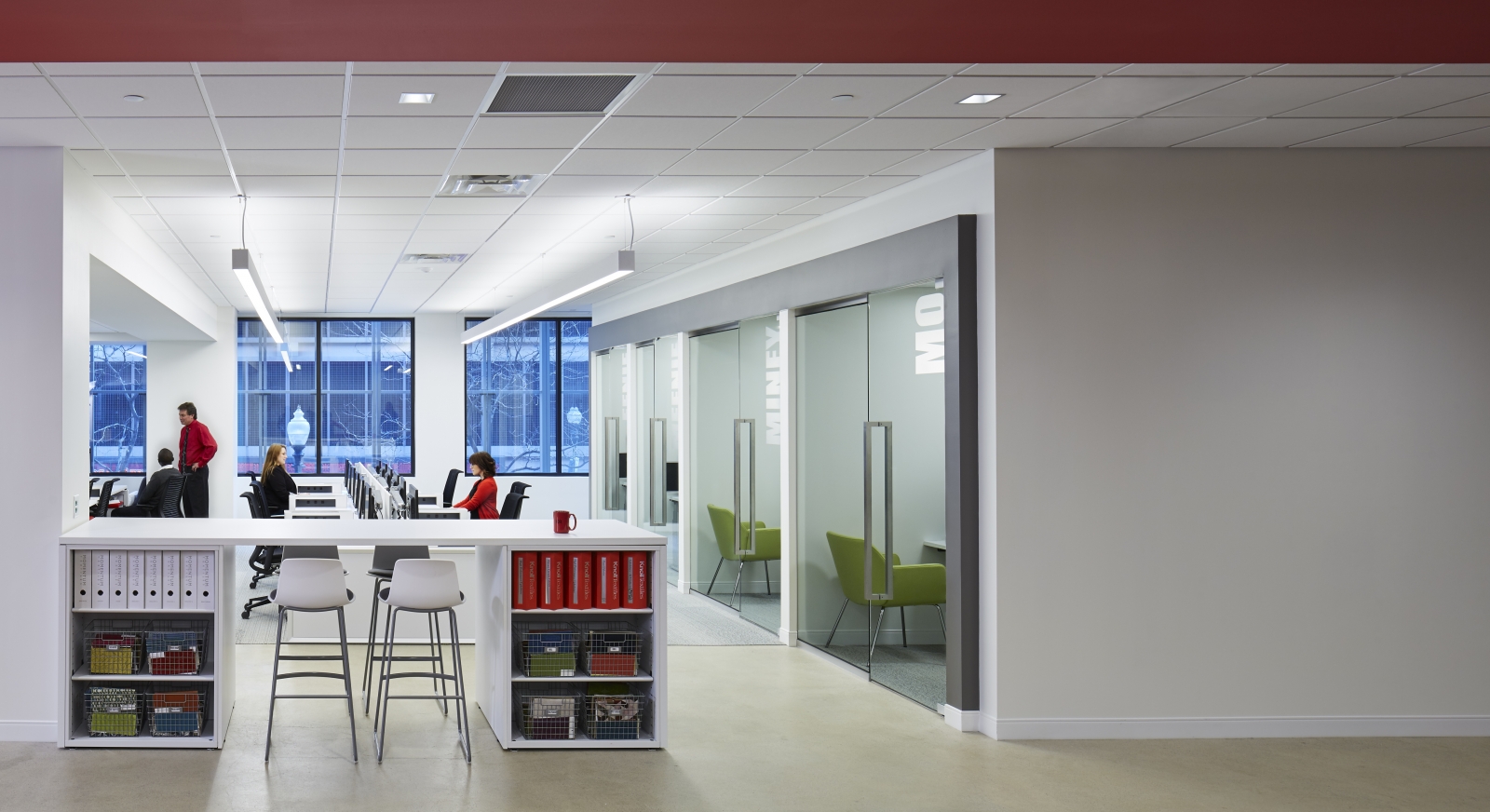 First, the staff lives in the space; then, Rodriguez explains, details can be added: “One of the things that we did when we were designing the space, very, very intentionally, is we left a lot of it. We didn’t design everything. So we designed the core to it, but there’s a lot of layering that can come into the office still, as far as what’s put on walls, personal spaces.” 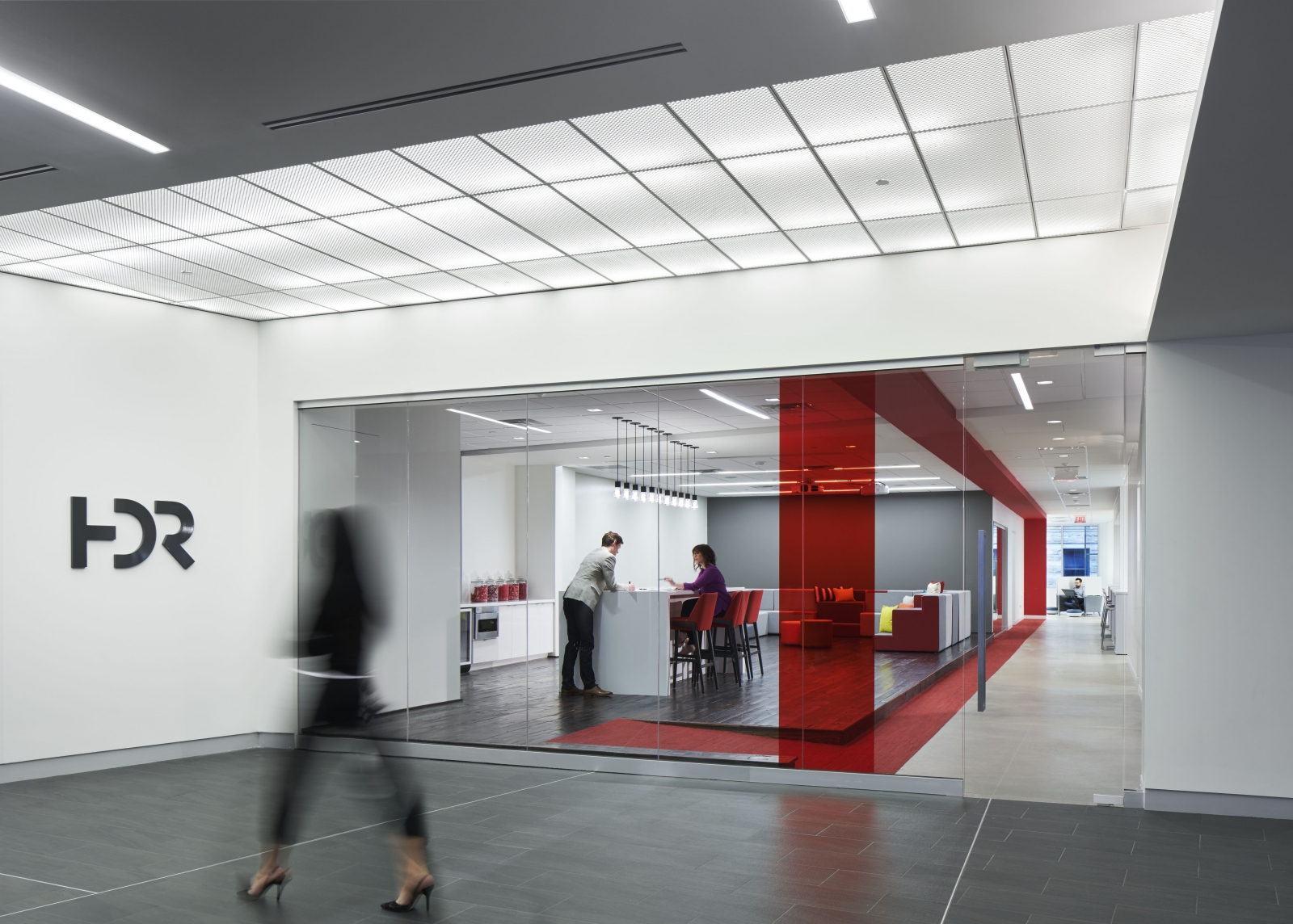 In the first round of intel-gathering, “people were commenting that they’re getting to know people and talking to people that they’ve been working with for years, but because they were separated physically, they just never interacted with,” Friedow says. “So I think that in terms of that sense of collaboration, that has really increased in the new space.”