The opening parties may be over but the Biennale has just begun. Here is the confetti-strewn courtyard of the Belgian Pavilion—this party-like ground cover is part of their installation.

The Architectural Biennale is open for business. After a vernissage weekend for the press complete with a schedule of opening upon opening with free catalogs, Prosecco, food, and other assorted goodies, the Biennale is now open to the public and the vibe has changed drastically in the last week. Gone are the activities and press teams and video cameras and the gardens are considerably quieter. Visitors can hardly believe that merely a month ago only overgrown weeds and boarded up buildings existed. For a brief moment, the Biennale resembled a senior architecture studio and unfortunately the excitement and energy of the installation period can’t be preserved for the duration of the exhibition. Radio Pirata packed up their mobile broadcasting station powered by bicycles and lemons, the Norwegians stopped serving smoked salmon from their camper, and the free water station has run dry. Now the exhibition resembles more of a traditional installation without interaction or activities for the daily visitors (except for a sampling of winter cabbage and lettuce at the American Pavilion that all are welcome to eat and will be covered in full in a later post). So this post will really serve as a post game wrap up of sorts to try and illustrate the atmosphere of the opening weekend. 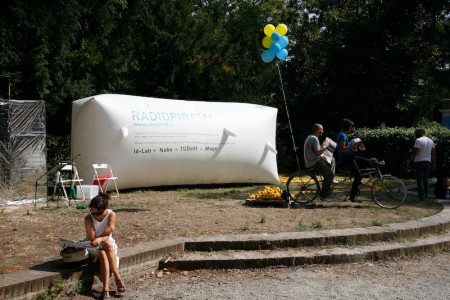 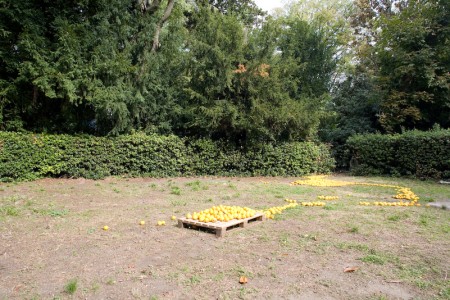 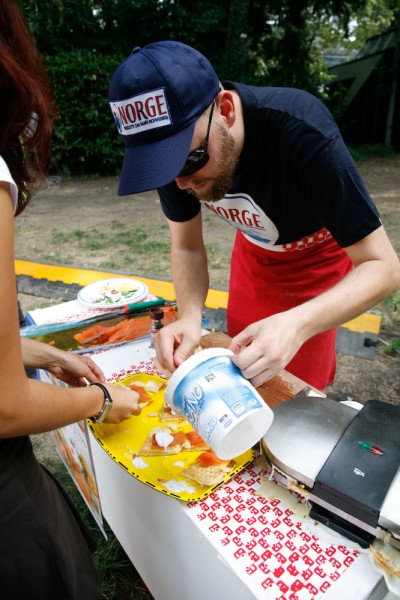 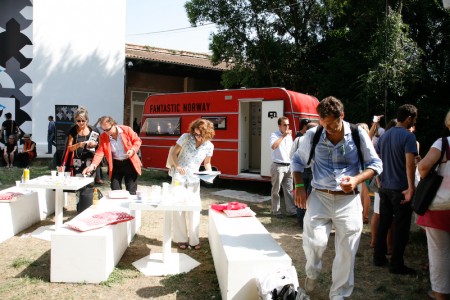 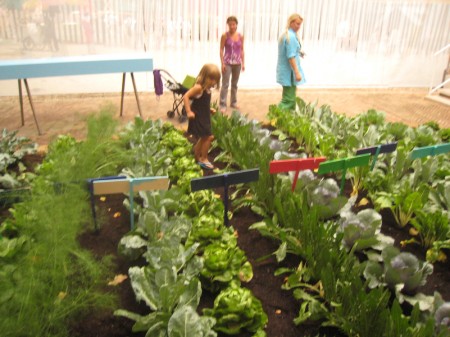 The name of the game during the opening events was swag, swag, and more swag. The openings were the best time to get the coveted tote bags advertising each pavilion which I hear are the most exclusive fashion accessory on the streets of London amongst the independent art types. (Last year’s Tracey Emin tote from the British Pavilion is currently listed at $37.40 on Ebay when it could be had for a smile and 5 euros just last summer.) This year’s swag highlights included the Australian, Korean, and Austrian totes, the green Dutch USB wristbands, and the Polish catalogue given the incredible imagination and execution of the work. The onslaught was so fierce in the Polish Pavilion that the attendant’s refusal to give away free catalogues even prompted a judge to produce his official badge; suggesting that maybe it was in the pavilion’s best interest to give him a copy. This gift paid off when Poland was awarded the Golden Lion for the best Pavilion with its stunning photographs and photomontages of alternative building lives. 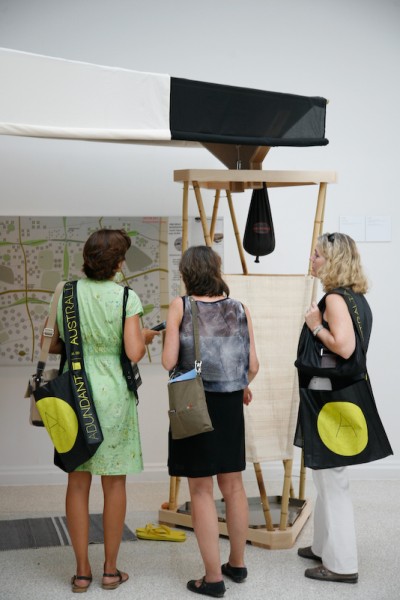 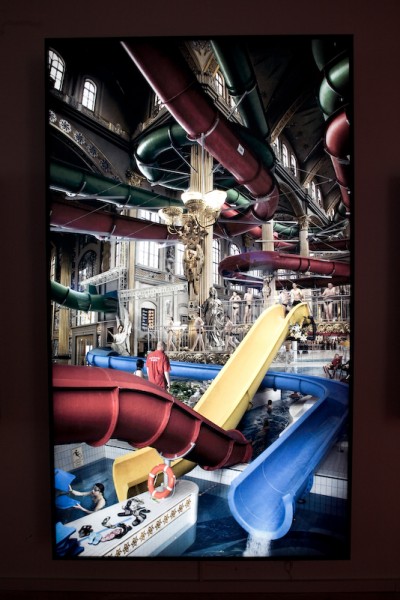 In the Polish Pavilion, work by Kobas Laska reimagines a church as a waterslide park 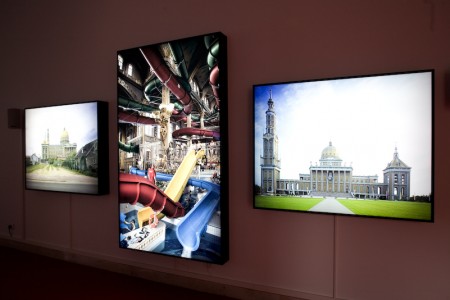 “Architecture Beyond Building” may be the theme of this year’s Biennale, but by the looks of this past weekend it could have been Architecture Between Eating. Pavilion after pavilion hosted open parties and openings complete with liquor and food enough to keep someone fed for the whole day. There were the ritzy parties that were invite only and then there were the populous parties held all day long and meant to provide nourishment for the workers and visitors.

The Hungarians brought a sampling of their own country’s pear Grappa to show the Italians that they too know a thing or two about spirits. The Grappa also helped in viewing the dizzying array of modeling videos created from surveillance cameras placed all around the biennale. In a strangely Orwellian fashion they created a project mapping the giardini grounds using video camera images showing tremendous potential architecturally but, given the current proclivities of The Homeland Security Administration, I hope it doesn’t make it to the States. 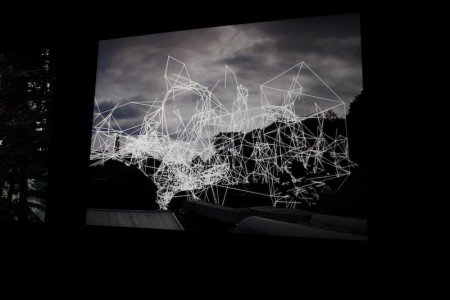 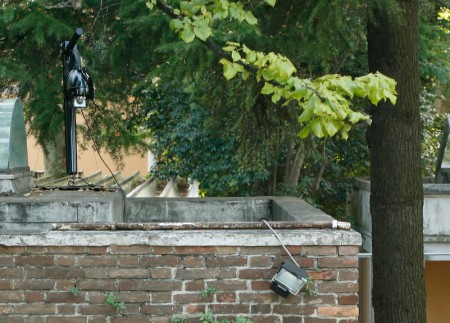 The Czech pavilion took the theme of beyond building to the extremes and chose to analyze peoples’ refrigerator contents to discover how people live at different times in their lives. The differences are astounding and bring up an important and often invisible function of the role of the architect in determining how a client will use a space. Looking in a dozen refrigerators also has an overwhelming effect on one’s appetite and proves that mother’s home cooking will always surpass those bare fridge college days. Luckily the Czech workers also doubled as chefs during much of the opening days and would cook the perishable contents of the refrigerators. 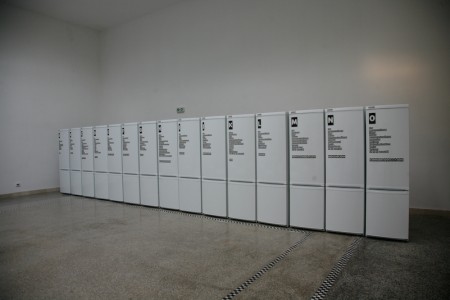 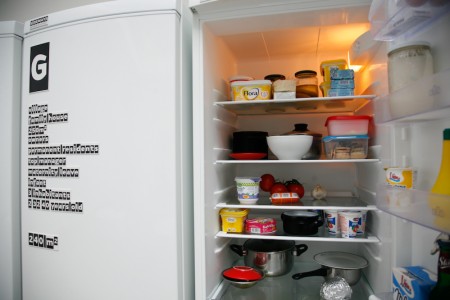 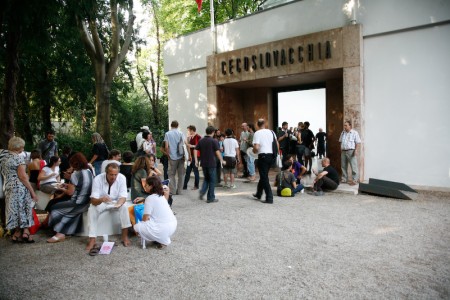 Perhaps the funniest of all the parties may have been the after party of the Belgian Pavilion. In what should have been their centennial celebration of the pavilion, the Belgians decided to demonstrate what the pavilion would or should have looked like after the centennial blowout they never had. In a bold Seinfeldian move, they created a pavilion about nothing. Surprisingly, the pavilion creates one of the most dramatic effects proving the Architecture of Nothing can sometimes say more than the Architecture of Everything. Unfortunately, I missed seeing if their opening lived up to their own confetti filled hype. 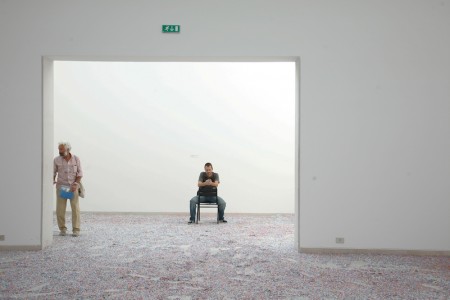 For those that missed out on the spectacular festivities I would like to suggest that you did not miss out on much. Although I have now dedicated half of this column to discussing it, I do so only to set the scene and paint a picture for you to understand how incredibly different it is from the actual event. In fact, the only chance to actually see the exhibitions came before or after the parties and crowds cleared out. Despite the rivers of Prosecco, pushing and shoving proved the only method of actually securing anything for an opening event magically transforms normally dignified folk into locusts swarming around the food and wine tables.

I think to explain this I must take a moment to explain the function of an Italian queue for an Italian waiting line functions differently than in any other 1st world country. Resembling more of a Soviet Era bread line, every person squeezes and pushes their way to the front of the line grappling for that last precious Prosecco. A 6″ gap between people serves as an invitation to weasel ahead of all others. Training for this technique begins from the time they can walk. “Vai avanti Tommaso, vai avanti. Forza! Forza!” Roughly translates to, “since you’re small son, sneak under the legs of everyone and get me a Prosecco and appetizer before they run out.” Advanced level queuing includes the “surprise and indignation” technique; if one should comment they should wait their turn an Italian will without doubt deny, deny, deny (much like our politicians) and then act utterly insulted that one could suggest such a thing and the truly bold will suggest you are the one advancing ahead of them. This method exists for all lines and, given the many bureaucracies at work in this ancient land, the Italians are really quite expert at it; especially when food is involved. 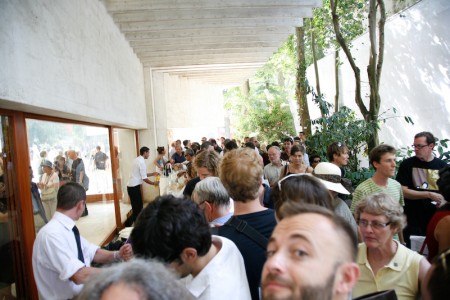 The only people who didn’t have to fight the crowds were Biennale Director Paolo Baratta (who’s arrival at any event is signaled by a photographer arriving first to get the best shot) and Curator Aaron Betsky. After a day of openings, rumor has it that Betsky apparently took an evening slip in a canal somewhere either on the way to or from his birthday party suggesting that perhaps he frequented one too many receptions that day and imbibed in one too many a Prosecco; proving that in Venice one should not drink and walk. (In fairness to Betsky, I heard the real story was he was chasing his cell phone that he dropped but the thought of him grabbing one too many free drinks makes for a much better image.) 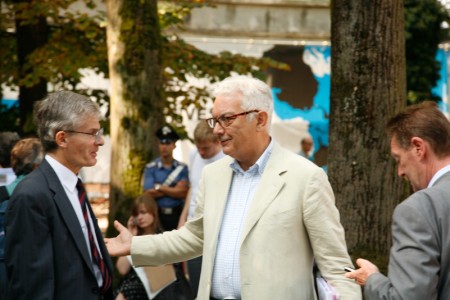 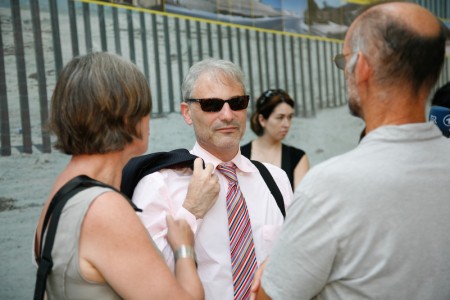