The Broad Art Museum at Michigan State University is an iconic building, drawing attention to the museum and the school.

When I asked philanthropist Eli Broad what he was looking for amidst the many competition entries for the new Eli and Edythe Broad Art Museum at Michigan State University, his answer was clear. He wanted the most iconic design, one that could make a statement about the institution’s ambition. And what was that ambition? To make a difference in the community.

Eli Broad knows a thing or two about architecture, having been a cultural benefactor and funder of buildings by Frank Gehry, Diller Scofidio + Renfro, and Renzo Piano. He’s also a creative and financial force behind countless educational programs around the US. In the end, he chose Zaha Hadid Architects (ZHA), known for their radical and cutting edge-design, in line with Broad’s and the university’s desire to shake things up in East Lansing. Competition juror architect Edwin Chan, a former design partner at Gehry Partners had this to say on the scheme developed by Zaha Hadid and her partner Patrik Schumacher: “For me, it was clear that the ZHA proposal solved the problem of the site and the museum program in the most efficient and direct way, both giving it dynamic spaces for contemporary art and fulfilling its role as gateway to the campus.” 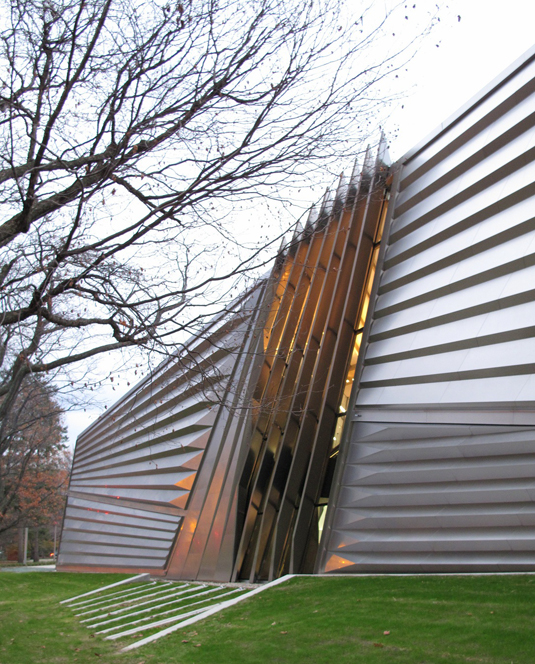 At first glance all the elements are here for another try at the “Bilbao Effect,” where powerful architecture becomes an attraction for “archi-tourism” and all that it entails. But a big difference here is the very genesis of the project. In Bilbao, the museum was one of the last elements of a grand scheme to redevelop that forgotten Basque city. In East Lansing, the museum is the main channel for an ambition that grew directly within the heart of the community, the MSU campus, to elevate the town’s cultural scene. 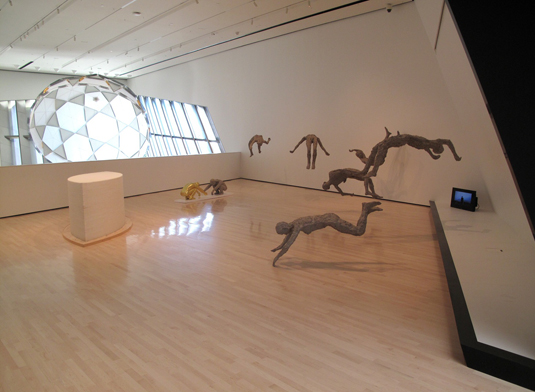 What started as a humble expansion of the existing museum quickly turned into something more ambitious when a site was found where the campus meets the city. This defined one of the institution’s main goals for the building program: It would effectively integrate the city into campus activity, and serve as a cultural border between the two. Sitting on a rather small but well located corner lot the ZHA project accomplished exactly that. The 46,000-sqare-foot, three-level building comprises a single skewed volume, clad in pleated stainless steel. The main lines of its angled, contorted geometry are derived from the pre-existing network of footpaths and visual sight lines that zigzagged the heavily pedestrian trafficked site. 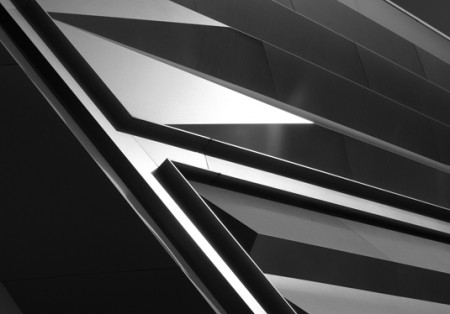 Inside, the slanted volume breaks into several irregular, prism shapes galleries that stretch and give the space an expansive feel beyond its scale, creating, as Hadid puts it, “a unique spatiality particular to the site.” She adds that the masterfully orchestrated fenestration “energizes the spaces through letting the light in where possible,” and giving it character. The resulting rooms give us a heightened sense of the surrounding and what’s in display, at same time each room invites us to explore and navigate to the rooms beyond. They present a certain fluent stillness. 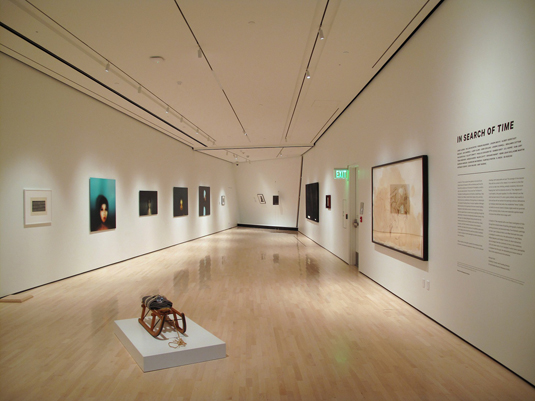 Having spent a few days in East Lansing, on the occasion of the museum’s opening events, I witnessed first-hand the palpable energy the new building has brought to the people of this college town. Talking to students and residents of the quaint Midwest town, I was inspired to see a whole community entering the cultural world at large. Paul Kotula, a ceramic artist and assistant professor in the department of Art History and Design at MSU, described that feeling. On his visit to the museum last Sunday, he told me, “People of all ages lined up to get inside the museum. They filled the sculpture garden and were participating actively with the portrait project by Jochen Gerz, too. The energy was amazing. I don’t think it will abate anytime soon.”

The art project he is referring to, appropriately titled The Gift: East Lansing, was developed by conceptual artist Jochen Gerz. Since late October he has been shooting portraits of the local residents, active participants of the museum, the ones building it and those who will work in it. Each photo is then printed, framed, and hung on a museum wall forming a giant grid that’s constantly being updated with new portraits. As museum director Michael Rush puts it, “The art work is the people. The photography wall becomes the great equalizer.” The final installation will, literally, bring the town’s people into the museum, to become part of its art and interact with its design. 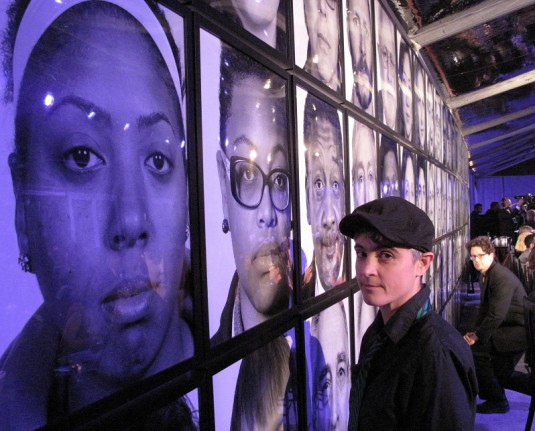 It’s estimated that Broad will bring close to $6 million in new annual spending to the region. Still for this infusion of capital to have its maximum impact, local businesses will have to do their share to make the most of the journey into East Lansing. ”I think entrepreneurs will see that the people coming to East Lansing will have needs beyond the museum and invest in what thoughtful creativity can produce to fulfill those needs,” says Kotula. Beyond cultural explorers and architecture devotees who will surely make the pilgrimage to visit the new world class museum and must-see architecture, the Broad Museum has already fulfilled its mission of being “a vibrant center for questioning and understanding the modern world.” 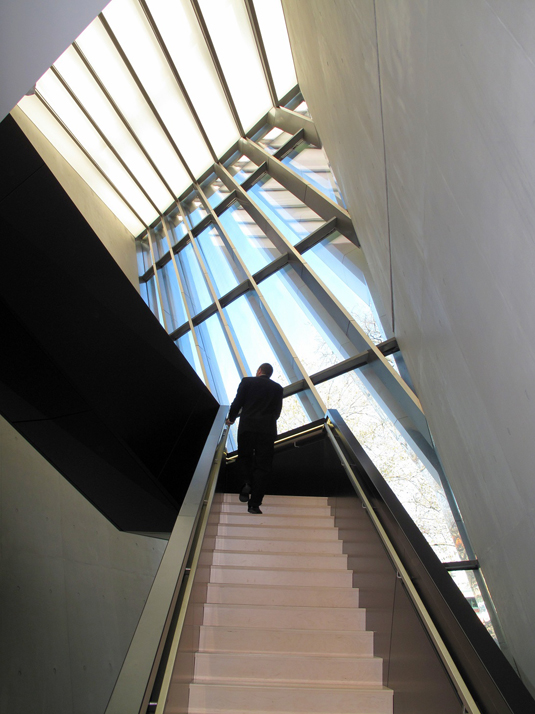 The exquisitely contorted stainless steel, light infused, dynamic jewel box of a museum brings the modern world to East Lansing, permanently enriching and expanding the community’s reach, both in and out. ”Seeing the extensions of light off the base of the building at night reinforced the idea of what the museum is about: to be connected to a much broader sense of landscape,” says Kotula. His comment underscores how ZHA’s dazzling repertoire was used here to its fullest potential, creating a cultural structure that also anchors the community it was designed to serve. 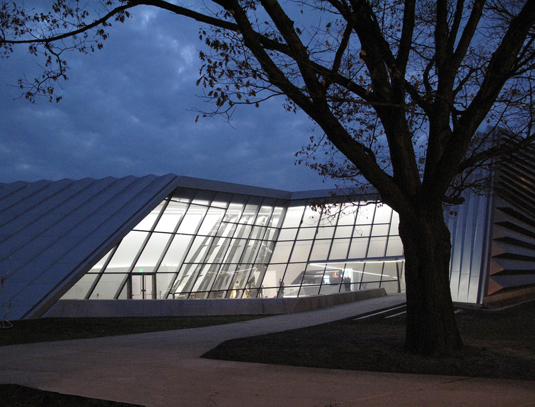