The installation at the SCI-Arc Gallery in Los Angeles by Zaha Hadid Architects (ZHA) represents an evolution of architectural methodologies related to self-supporting, curved surface geometries. The show combines parametric design (algorithmic form generation) with research by Frei Otto, Felix Candela, and Heinz Isler among others from the generation that preceded Hadid. By integrating form-finding methods, Hadid and her team expand upon Frei Otto’s material explorations and create double curved surfaces through interactive and intuitive computational simulations.

Initially the installation was realized with fabric as a form-finding device, using intuitive digital tools such as GPU accelerated particle spring simulation and subdivision surfaces. The physical prototype created at SCI-Arc consists of fiberglass and resin shell structures with wood framing along the finished edge. Originally there were to be five shells but only two of them were completed with fiberglass and two other structures were sketched out with wood framing to give viewers an idea of how the forms fit together. 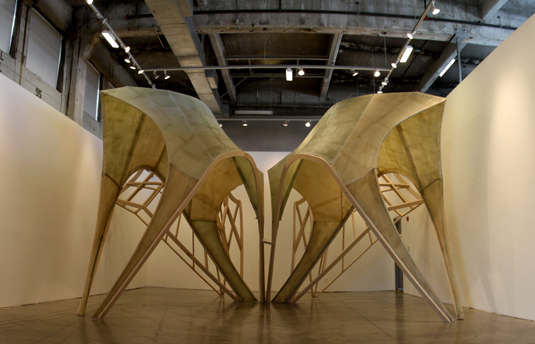 Prior to the opening earlier this month, SCI-Arc hosted a discussion with director Eric Owen Moss and Patrick Schumacher, Hadid’s partner. Schumacher said that the design was finished according to the latest design alteration while Moss asserted that perhaps the discussion and meaning of the research was more important than the finished product. This research platform is supported by the SCI-Arc Gallery, developed by Moss in the early 1980’s as a place to experiment and spur on probing discussions that move beyond the walls of the architecture school. The Moss-Schumacher debate played out in an interesting fashion. Moss asked direct questions, Schumacher gave indirect replies. When asked about ZHA’s preference to create curved rather than oblique surfaces, Schumacher replied that the minimal surface allowed for parametric superiority, creating suppleness, gradients of complexity, and fields rather than orthogonal cells for mediating social functions. When Moss asked whether it was important for the audience to understand the installation’s technical aspects, Schumacher responded that the objective is to diversify architectural morphology such as the research on lightweight soft shell structures. Once users see the form, process falls away and they begin to care about the social implications. This description was too broad for Moss, who continued to chase a detailed explanation, while Schumacher vaguely replied that social functions relate to parametric design as complex orders, where new levels of aesthetic organizational objectives fuse and separate and these are absorbed into the morphology of the shells. In addition to this exhibition, ZHA currently has a show of a similar nature in the Arsenal at the 2012 Architecture Venice Biennale, which I saw a few weeks ago. When I asked Schumacher what the differences are between the two exhibitions, he said that in Venice they used pleated metal while at SCI-Arc they used fabric to find the form in space, which was simulated by the computer. He then went on to say that both installations were asymmetrical opportunities rather than being a simple dome or rotational body and that they share investigations into complex geometry without the use of molds.

The SCI-Arc exhibition features a strain of methods that will be closely studied and analyzed by those who visit the gallery. Many questions will arise regarding the final form and its digital to physical realization, which are not entirely made clear by Zaha Hadid Architects, allowing for many productive discussion and speculations on future projects.

Tiffany Shaw-Collinge is a recent graduate of the M.Arch 1 program at SCI-Arc and currently has work in the Canada Pavilion at the 2012 Architecture Venice Biennale.