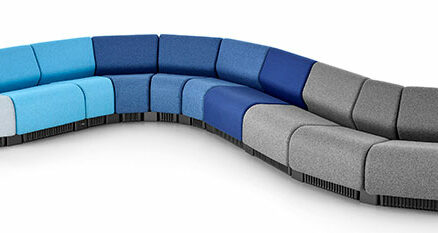 NeoCon has provided a platform for ideas that have transformed the ways we live and work for the past 50 years. Through its first five decades, NeoCon has showcased commercial design’s response to technological advances, cultural change, and growing ecological consciousness.[/vc_column_text][/vc_column][/vc_row][vc_row][vc_column][vc_column_text]

The level of creative output in contract interiors at midcentury was astounding. Modernist visionaries whom we today consider legends presided over postwar American design. Florence Knoll assembled star designers and architects to create furniture for Knoll while she led the charge on office planning. George Nelson and Robert Propst conceived the Action Office at Herman Miller.

In the midst of this design renaissance, the first International Contract Exposition & Congress was planned for Chicago’s McCormick Place in March 1967 with more than 200 exhibitors. But fire destroyed the venue, and the Merchandise Mart, already home to the best furniture showrooms, took on the task of creating the industry event that would become NeoCon.

With office planning now firmly entrenched in the designer tool kit and the office systems business booming, it was imperative that the interior design community in the United States come together, set standards, and move the profession forward. The creation of ASID and BIFMA in this decade were huge milestones for the contract furnishings industry.

One of the new rallying cries was environmental consciousness. The United Nations held its first global Conference on the Human Environment in Stockholm in 1972. The energy crises of 1973 and 1979 also put pressure on business leaders to conserve energy.

The first IBM personal computer was unveiled in 1981, unleashing a revolution in workplaces. Apple’s Macintosh computer was released in 1984, and Microsoft launched Windows the following year. Desktop computers began to change work and, by extension, how designers would approach workstations, with new demands for power and data connectivity.

Stylistically, with the first exhibition of Memphis design in Milan in 1981, Postmodernism found its way from architecture to furniture. Manufacturers enlisted noted Postmodern and Deconstructivist architects such as Robert Venturi, Frank Gehry, and Peter Eisenman to design objects and furniture.

One of the big impacts of computers in the workplace was that people had to adjust to new ways of sitting. So while the major books on ergonomics—Henry Dreyfuss’s The Measure of Man and Niels Diffrient’s Humanscale—came out in the 1960s and 70s, it wasn’t until computers became ubiquitous that ergonomic task chairs became de rigueur.

Companies spent years of research in getting everything right for blowout chair launches. Michael McCoy and Dale Fahnstrom’s Bulldog Chair for Knoll opened the decade; Herman Miller’s Aeron Chair, shown at NeoCon in 1995, provided a high point in the middle; and Niels Diffrient’s Freedom Chair closed out the decade by catapulting a new company, Humanscale, to prominence.

In the new millennium, the contract industry adopted more rigorous standards and third-party certifications, as specifiers made more sophisticated demands for environmental performance.

The decade opened with the unveiling of the Leadership in Energy and Environmental Design (LEED) certification system. In 2002, chemist Michael Braungart and architect William McDonough published Cradle to Cradle: Remaking the Way We Make Things, which suggested

a new manufacturing paradigm. Many companies quickly made significant strides. Designtex, for instance, was able to offset the full carbon footprint of its global operations—the kind of achievement that would have been inconceivable in a previous decade.

The Great Recession of 2008 precipitated an upheaval across all industries. While interior design eventually bounced back from the economic setback, the cultural repercussions changed commercial spaces forever.

Entering the workforce at a difficult juncture and finding few opportunities, the millennial generation began to create its own, launching a host of tech-savvy, countertraditional start-ups. As both employees and entrepreneurs, millennials were digital natives who adopted iPads and telecommuting with great ease; they were cause-driven and brought urgency to ecological and social concerns; and their easy blending of personal and professional goals transformed office culture.

Office design is being transformed by coworking and virtual reality, even as big data and smart technologies drive new modes of office planning. Trends in residential, hospitality, health-care, education, and workplace interiors continue to converge and intersect.

Human well-being is emerging as a new benchmark for good design, as is inclusivity for people of all abilities, genders, and ages.[/vc_column_text][/vc_column][/vc_row]